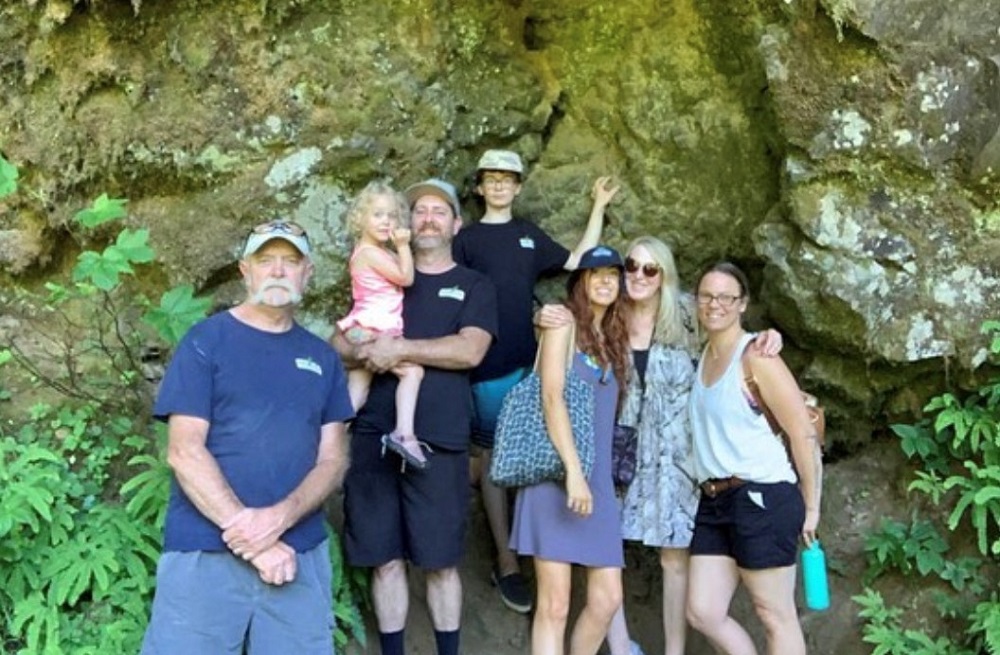 In June 2021, we flew out to Portland to meet my half-brother, Ollie, and his family. We spent a week with them, exploring all over Portland. We went to a beautiful waterfall on this day and took our first family photo. (Courtesy of Caileigh Pattisall)

I just went on my second-to-last retreat with Good Shepherd Volunteers, our silent spirituality retreat. We stayed silent for about a day and a half, and I wasn't worried. I was even excited to take a break from my phone and enjoy some silence away from the city. But boy, was I unprepared for how loud silence can be.

The first morning of silence, I couldn't stop thinking about my family; specifically, my brother. Our program directors were leading us through a few silent activities, and everything they said just reminded me again and again of him.

I lost my brother, Cameron, a little over five years ago to an overdose. He didn't die, but he suffered a tragic anoxic brain injury that has left him unable to be the person he once was. He now lives in an assisted-living facility where he has 24-hour care, which is what he needs. He needs access to medicine and nutrition at all times and is unable to walk, talk, or eat by himself. My parents have been consumed by their roles of caretakers, visiting him every day and caring for him in any and every way they can.

This all happened way into my freshman year of college, as my life was in a constant stage of change. I've carried a feeling of survivor's guilt, that I'm still here and my sibling is not.

At the retreat, right after we broke for an afternoon break, I headed over to a picnic table in a nearby field. I began to journal about what I had been thinking about, and I started to cry. I cried for about an hour about my brother, about the cruel shift in my family's life. I cried for the life we lost and the life we no longer had because of this horrible accident. I also cried about the true resentment I had been harboring toward the Universe, toward God for allowing such suffering to go on within my family, throughout the world. I cried for the guilt I carried for such resentment toward a God that I've always been told wants nothing but goodness for me, because I didn't believe that. I felt cheated and no longer trusted his plan, his judgment.

A part of the silent retreat is that we have the option of sitting with Good Shepherd Sr. Fran Lomeo for an hour of spiritual guidance. At first, I didn't sign up. I didn't know what I would say, what I would ask. I didn't grow up in a very religious family, and we didn't go to church. I've always been curious but haven't felt necessarily welcome.

After processing in the field what had been on my mind — the sadness, the guilt, the resentment — I decided to go see her. I sat down in Sister Fran's office, and I noticed my voice was soft as I tried to speak. I thought I had cried myself out, but the more I tried to speak up, the harder it was for the words to come out. More tears came, and Sister Fran was patient with me. She even sat closer to me as I explained what I'd been thinking about through my first day of silence. I told her about my brother, my family, and how my trust in God has wavered.

I was surprised when Sister Fran said, "Well, that's the most normal question someone can have. Why me? Why my family?"

It brought me such comfort to know that what I was feeling was normal. To know that I wasn't a bad person.

She continued to say: "It's normal to feel resentment toward God or to anyone you're in a relationship with if you feel like they weren't with you through something terrible." She said even Mary suffered so much to see her only son die right in front of her. We sat with this, and I felt less alone. 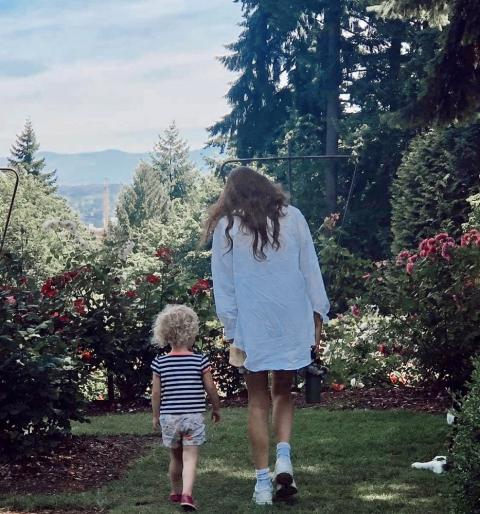 My 3-year-old niece, MaeMae, and I walk through the Portland Japanese Garden during my family's June 2021 trip to Portland, Oregon. (Courtesy of Ellen Pattisall)

Sister Fran then asked if Cameron was my only brother. I smiled and said, "No." I couldn't have said that a year ago.

Last March, my dad found out through a Facebook message that he had fathered a son back in college. Ollie, his son and my half-brother, now 40 years old and living in Portland, Oregon, reached out in the hopes of building a relationship. It brought tears to my dad's eyes as he read the message aloud to my mom and me at our kitchen table. He actually couldn't finish the message because of his emotions, so I continued it for him. I had a gift, a half-brother.

I had thought my chances of being an aunt were gone after Cameron's injury. In the years since, I thought of all the conversations we once had of family vacations and being the "cool" aunt and uncle of our future children, and I had grieved that idea. But just like that, in one message early one spring Sunday morning, I had a half-brother. Ollie has a full life, a beautiful wife and two great kids, my 12-year-old nephew and 3-year-old niece.

Sister Fran smiled, recognizing my newfound family as a gift. She gave me the advice to focus on myself, to heal from what's happened, and, in time, a spiritual relationship will be easier. I took that with me the rest of the retreat and as we came out of the silence.

On the first day of the retreat, we each received an invitation with a different word to guide us through the weekend. My invitation read, "Welcome." I don't know if that's the Universe welcoming my healing or God saying we need to work on our relationship. Maybe all of the above.

Our newfound family in no way replaces what we have lost, but it is that much more precious to us because of it. I can't come to realize God's intentionalities behind what has happened in my life, but I am rebuilding my trust in a plan someone greater has for me, all the while believing that I have the strength to heal and move forward in my life, honoring Cameron's through each step forward.