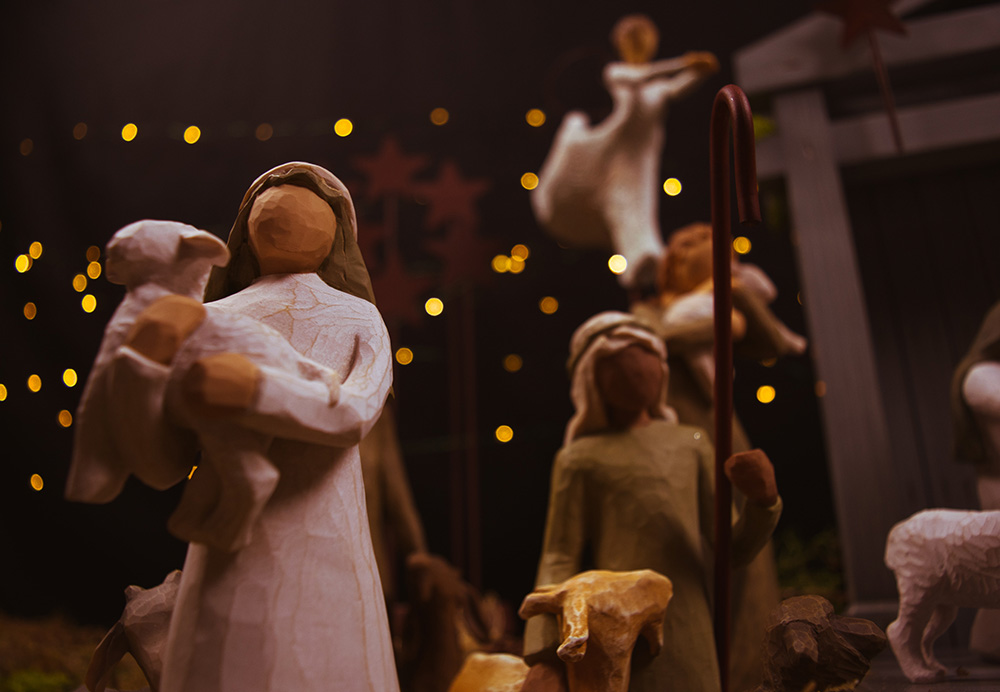 For weeks, I have been waiting on a set of Christmas cards to arrive at my local card shop. They're not covered in glittering trees and they don't feature the holy family. No, there's no sign of Christmas on them at all ... unless you know what you're looking at. Each card has a few simple shepherds gathered in a field, above them a star shines and around them sheep graze. Little lines of gold provide a flourish and lead the eye toward a town in the distance.

Fittingly, the cards have taken their time arriving, much like many things this year. And as I anxiously await their arrival, these shepherds have reminded me that we each have a part to play in the Christmas story.

Advent is a season of waiting and of anticipation. We hear John the Baptist signal what is to come and hear stories of dreams and visions that anticipate the future. In the midst of all of this, I find myself waiting on Christmas cards and wondering about the stories these ancillary characters have to tell us.

What would the Christmas story look like through their eyes? How would shepherds recount what they found? How did Joseph make sense of his long journey? What were the wise men thinking as they traveled to and from Bethlehem?

As the old saying goes, we are all the stars of our own story. Everything that happens, in our point of view, revolves around us. The people we know, the relationships we build, the troubles we face, the tales we tell — they all, in one way or another, revolve around us.

This is how we make sense of our lives. We relate interpersonally and intrapersonally and at the center of each of those ways of relating is our very self. More often than not, we are the hero of the tales we tell. Even when we aren't, when we admit wrongdoing or are the butt of the joke, the story still revolves around us. This is why it can feel so revelatory when we see things from someone else's perspective, when we realize that their reaction has nothing to do with us or worse, that their reaction has everything to do with us, but not a part of ourselves that we readily recognize.

In that vulnerable position, when we are shaken from the center of the universe — with the world revolving around us — we recognize that there's more to the story than we can see. We recognize that, in other people's lives, we are the supporting players in a cast of characters; we've been cast in a role we never auditioned for.

This realization brings with it a certain mix of liberty and humility. Whatever part we're playing, we can't really control how it's received. It's also a reminder that even while our story is unfolding, we're a part of a thousand other narratives around us. Perhaps the best way forward then, is to be the best version of ourselves we can be.

The same might be said of the Christmas story.

The main character in that story is God, precisely in the person of Jesus Christ. The story we tell about Christmas revolves around Christ's birth, the joining of heaven and earth, as God became one with us in a very real way. There in Bethlehem amid the hubbub of the census, a baby was born. That birth changed the world and in the story of it, we stand in awe, recognizing our place and relationship to it all.

We may not be shepherds or innkeepers or expectant parents or people who turn to the stars for guidance, but we are still there in that moment, our lives intertwined with theirs. As we reflect on the story of Christmas and prepare ourselves for Christ's coming in that moment (and so many other everyday moments of our lives), it's a good reminder that we are not the main character. We are not the Light. Jesus is. We, rather, reflect the Light of Christ to the world.

Our call as disciples — as real people living lives of faith in the real world — is to play our part in the story of Christmas to the best of our ability. We may not have auditioned for the role that we have, but in our lived belief, we have surely accepted our part in this play. Like Mary offering her fiat or the shepherds following the command of the angels, we witness Christ's coming into the world and are offered the grace of accompanying that incarnation.

Thinking in such a way is not to make ourselves the center of the story of Christ's coming but to acknowledge that that coming is integral to our own story. We are called to be in relationship with this One who became human. One like us ... and like the shepherds ... and like the wise men. We are not meant to be messiahs, but we can herald the coming of the reign of God. We do so in the way we live and the story we tell with our lives.

In so doing, we become supporting characters in the Christmas story, characters with our own story, a story that can be revelatory of God's union with humanity if we only let it. Accepting this role is a liberating and humbling experience, one that embraces the joy of God's love and works so that that Love is evident in every situation. It may not always be a glamorous or triumphant call but it is ours, as messy as a manger and as inspired as a voice crying out in the wilderness.

Supporting characters rarely get the glory of the whole story. They are not the focus. Yet we, like them, garner something much greater by embracing our part. Like shepherds on a hillside, following the Spirit in the darkness, we stumble into a story much bigger than our own. There, we are called to let go of the drive to be the hero or the illusion that it's all about us and instead discover that the glory of God is coming into being right here in our midst. All we need to do is play a supporting role.