by Julie A. Ferraro
Spirituality
This article appears in the Lent feature series. View the full series. 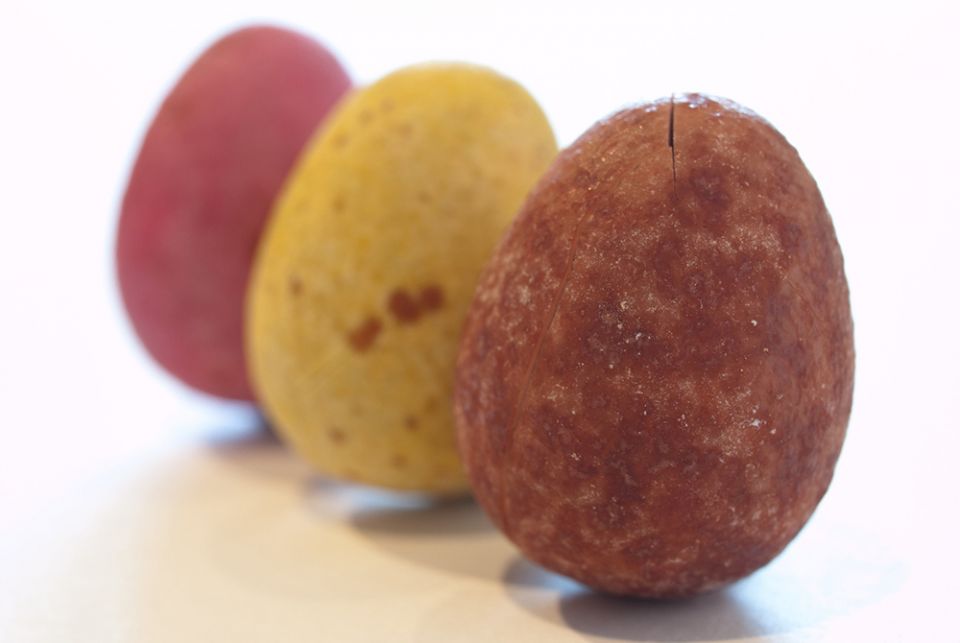 Cadbury's Mini Eggs, which Julie A. Ferraro resolves to steer clear of during Lent. (Flickr/William Warby, CC by 2.0)

When I attended Catholic grade school in the 1960s, the Sisters of St. Francis of Perpetual Adoration taught us that giving up something for Lent was mandatory.

Over those years, already a chocoholic, I believed it my duty to forego the milk chocolate sweetness until Easter Sunday, an act of self-denial of the most arduous kind.

Various sources explained to me how it wasn't necessary to go the entire stretch from Ash Wednesday to Easter without chocolate. Sundays were a "day off" — a respite, a way to cheat, if you will.

Still, I held firm and struggled my way through each day, trying not to notice the commercials touting Easter candy on television, or filling the aisles of the grocery store.

I was not always successful.

By the time I reached junior high in the mid-1970s, besides the incessant craving for chocolate, another bad habit had entered my life: cracking my knuckles. My mother, like all of her generation, repeatedly told me I would end up with arthritis if I kept it up.

So, I gave up that practice for Lent — and haven't cracked my knuckles since.

In more recent decades, the focus has shifted from giving up bad habits for Lent to doing good works, stepping outside one's comfort zone to interact with the poor, address social justice issues or spend more time in prayer.

Still, the chocolate hangs over my head.

It's gotten exponentially worse since the introduction of Cadbury Mini Eggs — only available during Lent. I can bypass the countless bins of chocolate as I tick off items on my grocery list, but the brightly colored half-boxes bearing the Cadbury logo call my name, loudly.

Admittedly, I am very selective when purchasing the treats. I comparison shop, reading labels to determine the lowest per-ounce price (sometimes the larger bags are actually more expensive), and watching for ads or coupons. When I'm buying as much as 13 pounds of the stuff in a six-week period, it pays to be frugal.

That's right. Fasting on Ash Wednesday, for me, can amount to two small portions of mini eggs and a glass of milk early in the day, and the better part of a 10-ounce bag for dinner.

I don't worry about not eating meat on Fridays, because I'm eating the Cadbury instead.

People who I've told about this are often amazed I don't have some serious health problems. I think my blood is 90% chocolate, as it is.

The past nine years, as I've traveled around the United States, serving as a full-time volunteer with Franciscan friars and sisters in various states, I've witnessed the true spirit of Lent: individuals and entire communities stepping out in faith in service to others. Parishes schedule not only weekly Stations of the Cross and fish dinners, but study groups or simple soup suppers, with the funds raised financing the operation of food pantries or other charities.

The starkness of some parish liturgies brings home in a dynamic way the penitential flavor of the season, even more so since the start of the COVID-19 pandemic restrictions. This past year, giving up dinner at restaurants, social gatherings or other customary events during Lent wasn't really a voluntary choice. This year will be similar, even with the vaccine available on a limited basis.

The sensation of moving through a dark tunnel for 40 days can weigh heavily on some, but the light at the end — Easter — is worth the toil.

Emphasis placed on assisting others along the path, keeping hope alive, expressing faith through action, is the best course for Lent, of course. I have tried to adapt myself to those practices, assisting as I can with organizing gatherings (though you don't want me trying to cook soup!), restocking food pantry shelves, or sharing my faith in small group settings.

Time and again, I have tried to convince myself that every time I crave Cadbury Mini Eggs during Lent, I should put the cost of a bag into the Catholic Relief Services Rice Bowl. I think about the penitential practices of my favorite saint, Francis of Assisi, or the wisdom of St. Benedict, who advised all things in moderation.

Still, the chocolate calls to me.

Is there anything intrinsically wrong with eating chocolate during Lent?

There are far worse habits I could have, far more expensive, far more damaging to health and life.

Yet, if I consistently tout the quote, often attributed to St. Francis, "Preach the Gospel. Use words if necessary," and cannot maintain a bit of self-discipline by eating a salad instead of shoveling small chocolate eggs into my mouth by the handful (never one at a time!), then where is my faith in the God who blesses us with strength in difficult times?

This Lent, I resolve to again acknowledge my dependence on that all-loving God, who created chocolate to give us joy, and to nurture a deeper faith through my deeds — while steering clear of Cadbury Mini Eggs.

(Or, as a compromise, maybe I'll buy a few bags during Lent, then hide them until after Easter!)

Julie A. Ferraro, a journalist for more than 30 years, is a Benedictine Oblate of the Monastery of the Ascension, Jerome, Idaho. She recently moved from Yelm, Washington, to be part of an intentional community with the Sisters of St. Francis of the Neumann Communities, who sponsor a house of discernment in Pittsburgh.

In Lent, should I pray only the sorrowful mysteries of the rosary?

The call of a simple Lent: Unclutter your spiritual house

Lent: A season to transform in love and fraternity

Sisters sing: a program of gratitude