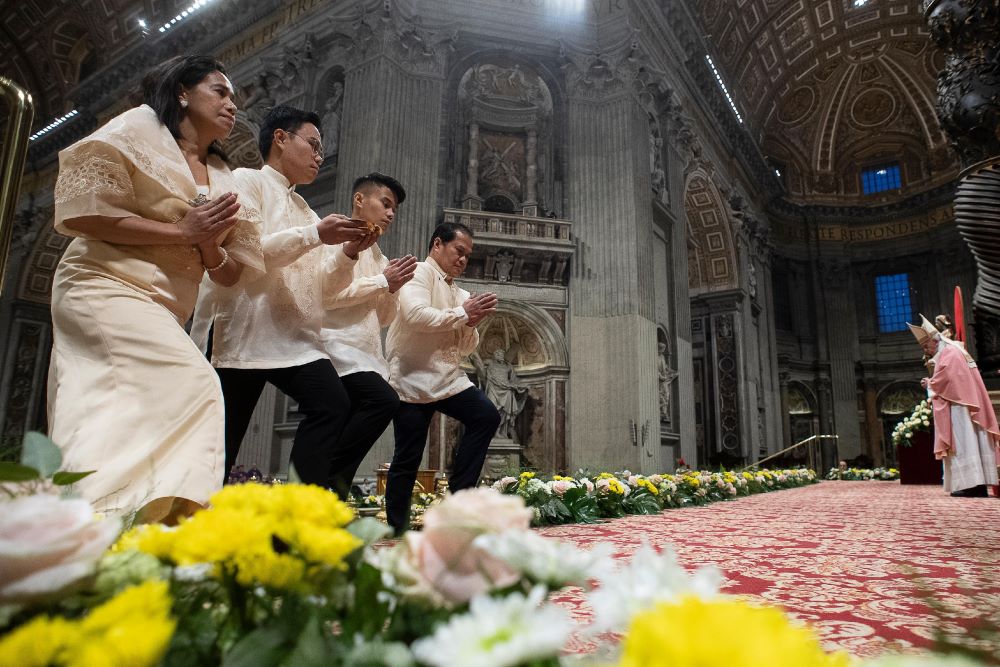 Members of the Filipino community in Rome approach the altar in the Vatican's St. Peter's Basilica during the offertory procession Dec. 15, 2019, as Pope Francis celebrates the first of the Simbang Gabi, a novena of nighttime or pre-dawn Masses in preparation for Christmas. (CNS/Vatican Media)

In the Philippines, Christmas is in the air as the "-ber" months begin to unfold. They say Filipinos celebrate Christmas longer than any other country around the world. Although Advent starts around the last week of November, Filipino people start playing Christmas songs and putting up Christmas decorations by September.

A famous song in the Philippines is heard as the traditional novena Mass starts on Dec. 16, and it goes:

Simbang Gabi is the beginning of Christmas in the hearts of the Filipino people.
We wake up for nine nights to the incessant ringing of the bell.
We're early the next day, we're going to walk in groups.
Greet the godfather and godmother "Merry Christmas"
And kiss the hand.

This song depicts one of the traditional Filipino ways of preparing for the Christmas feast, Simbang Gabi (Night Mass) or Misa de Gallo (Rooster's Mass in Spanish). It is widely observed throughout the Philippines, an archipelago, and Asia’s largest Catholic country.

For nine days before Christmas, Catholics get up early to take part in the early morning Mass Dec. 16-24. Some churches start as early as 3 or 4 in the morning.

At this time, families, couples and youth troop to the church. Others carry plastic chairs with them; everybody goes to attend the Misa de Gallo or Simbang Gabi. If you ever arrive late, you can't expect to be able to enter the church because of the many people attending.

I remember in my younger years, how some of my family members used to attend Misa de Gallo. We needed to get ready earlier so we could enter the church and find seats. Churches are usually full, especially on the first day of Misa de Gallo.

However, I was not much devoted to Misa de Gallo. Though it was a common belief that petitions and wishes would be granted when one completes the novena, I can't remember completing it in my younger years. I was part of the church choir, and we usually were assigned a day to sing during Misa de Gallo. So, I was obliged to wake up early and attend Mass. I missed some days as I was too lazy to get up too early.

The practice of Simbang Gabi in the Philippines dates to the 16th century when religious missionaries brought it to the Philippines from Mexico. Priests from this period agreed to hold pre-dawn Masses so that farmers could attend Mass before going to work in the fields.

It was at the First Plenary Council of the Philippines in 1953 that a formal petition to Rome was made to continue Simbang Gabi. The papal indult with these conditions says: "On the nine days preceding the Nativity of our Lord, i.e., from December 16 to 24, the solemn votive Mass Rorate Coeli Desuper is sung especially in parish and convent churches, but only once a day, with great solemnity and with a big attendance of the faithful."  On March 24, 1961, Rome granted the continuation of this indult for five years. Since then Simbang Gabi has been celebrated throughout the Philippines. 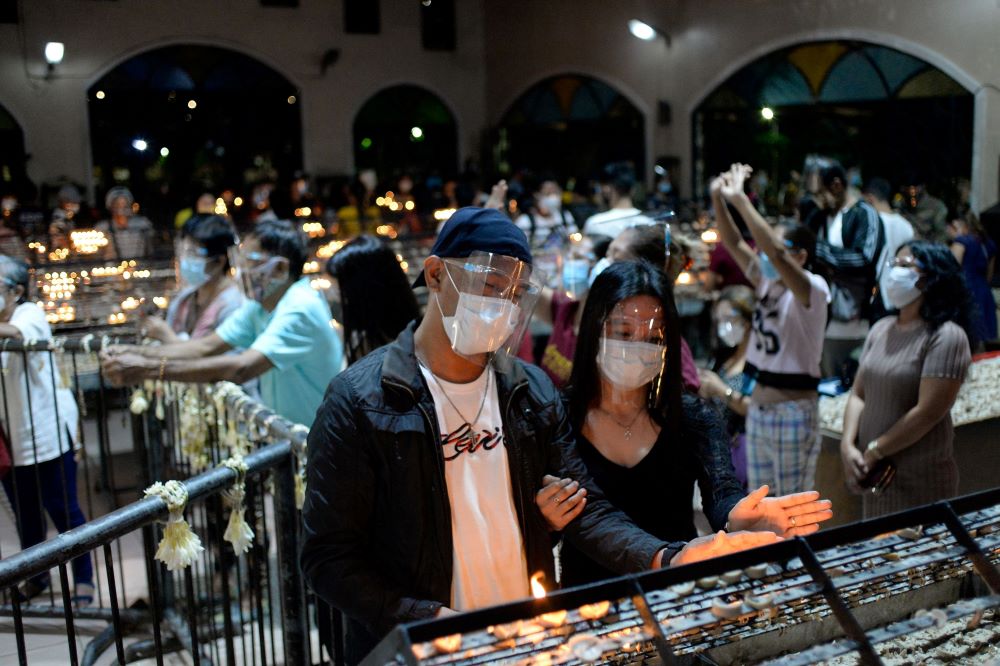 For Filipino Catholics, Simbang Gabi is primarily an expression of filial devotion to the Virgin Mary. They join and accompany her for nine days as she anticipates the birth of her son.

It is a great source of spiritual nourishment to the faithful, which leads them to prayer and contemplation, helps them to appreciate their faith more fully, prompts them to meditate on God's love and draws people closer to the one at the center of any expression of faith: Jesus Christ.

In a 2019 Mass with the Filipino community at the Vatican, Pope Francis expressed gratitude to Filipino migrants, noting "because of them, this devotion has crossed national borders and has arrived in many other countries."

More than the belief of having one's wishes and petitions granted when completing the Misa de Gallo, the tradition reflects the great faith that Filipinos have. This devotion nourishes the spiritual life of the faithful as they prepare for the celebration of Jesus' birth.

Neither the epidemics nor the pandemic have hindered the faithful in cultivating their faith. Churches managed to continue this centuries-old devotion. It continues to be celebrated in the Philippines, following COVID-19 health protocols and guidelines.

Although I still struggle even now to wake early to attend Misa de Gallo, I have learned to appreciate the spiritual richness of this solemn novena. It invites me to experience the joy and patient waiting for Jesus' birth.

Finally, Simbang Gabi is a gift to the Filipino people that strengthens their faith. It may be a tradition for some, but in the hearts of believers, this is a time of preparation and journey with Mary for an encounter with God-made man, Jesus.

Related: Simbang Gabi is joyous — and a reminder of Filipinos' complex history with Catholicism
This story appears in the Advent feature series. View the full series.