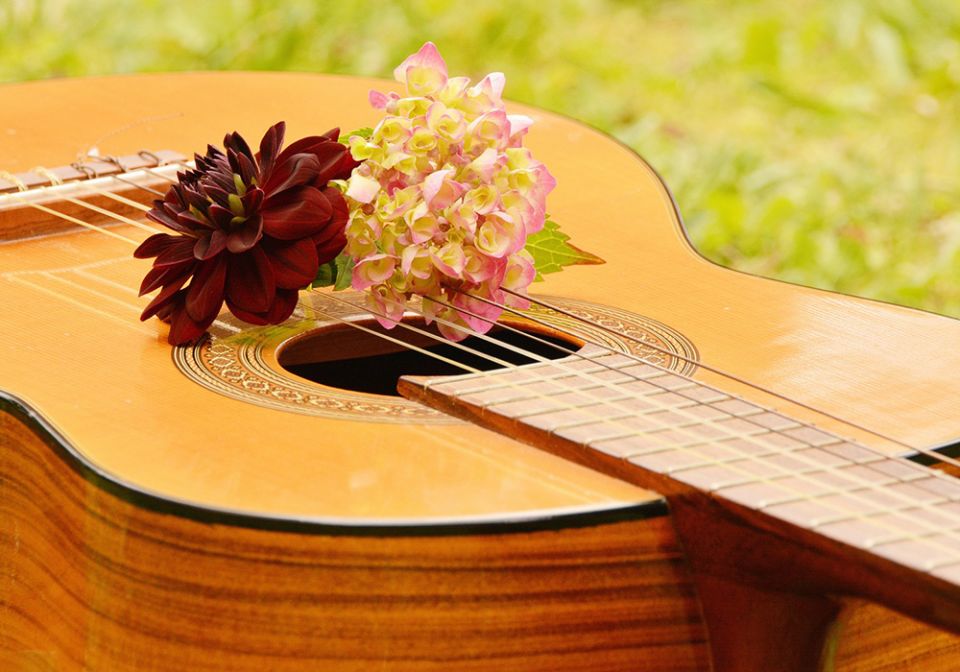 On Sept. 29, as an alumna of the original Jesuit choir, I was honored to be among those invited to sing at the St. Louis Jesuits' final concert, "Coming Home." It took place in the elegant Powell Symphony Hall in St. Louis, Missouri, near St. Louis University.

People bought some 2,600 tickets; the concert was a sold-out event.

This final concert featured the five original musicians who had composed most of the songs from the St. Louis Jesuits albums. As Jesuit Fr. Bob Dufford, Jesuit Fr. John Foley, Tim Manion, Jesuit Fr. Roc O'Connor and Dan Schutte appeared on stage, there was enthusiastic appreciation by all who had gathered to hear some of their favorite hymns.

Their arrival on stage attired in "regular" clothes was a hint that this elegant space was soon to alternate between cathedral and Irish pub, where awe inspiring music, sung by the composers, was accompanied by a dedicated audience and choir who already knew the songs and prayed them. Most songs were preceded by some words of banter among the musicians — so at home with one another — and then a brief background of how the composer was inspired or cajoled to write the song as he did.

As the hushed silence welcomed their words of camaraderie and inspiration, a familiar air of "being home" filled the elegant space. It was a concert praising God in the heart of our beautiful and broken city. Often I was moved to tears.

As our musicians led us through each song, there were some "senior moments"; these were either acknowledged or teased out, as only guys who know and love one another can do.

The current St. Francis Xavier College Church Choir, under the insightful direction of Ray Sherrock, along with alumni, and friends of the Jesuits, sang 24 original compositions, along with two encores.

As we sang, the memories triggered by certain songs brought to mind a lifetime of being loved by a God beyond all names. It was a time of praise and deep gratitude.

I sang as a member of the original choir who accompanied the St. Louis Jesuits in 1972, beginning in the chapel at Fusz Memorial, on the campus of St. Louis University. Remembering liturgical celebrations in this small and intimate space, I recall overflow crowds inspired and energized by the music, homilies and faith-filled congregations.

It was a sad day when the Jesuit pastor, Fr. Bob Houlihan, announced that the archbishop had stipulated that a small chapel could not be used for parish liturgies, when a large Gothic church was available. With tears and feelings of loss, the gathered community acquiesced as Bob called us to be faithful to the Jesuit vow of obedience, and prayed for blessing on that difficult move.

My earliest memory of singing in the choir loft of St. Francis Xavier College Church is one of fear. The church needed renovation and the choir loft was reached by one stairwell. As our director introduced us to this new space, he picked up a rope ladder attached to two steel rods saying that if there were a fire we should throw the ladder over the balcony and climb to safety, one by one.

Luckily we were safe and nothing unusual happened. However, this could be why the present college choir sings from the front of the church rather than the choir loft!

One touching moment I will never forget occurred when we were learning a new Jesuit hymn composed by John Foley. We were singing "Who Has Known" with as much understanding as one would sing "Row, Row, Row Your Boat." The young scholastic who was directing us knew the notes but not the spirit and mind of the composer.

After our first few sluggish attempts to sing it, John — who was in the choir — asked if he could say a few words about how this song came to him. I'll never forget his few minutes of explanation about how he had been praying when suddenly he was touched deeply by the words, "Who has known the mind of God." In his sensitive voice and soulful eyes, I understood the depths of grace he was offering us in this hymn. When he directed our singing with nuanced emphasis, coupled with respectful silence, we learned to pray the words of this hymn. It remains one of my favorites.

When we began practicing for our recent concert, we received 158 pages of Jesuit music and learned that the choir would consist of more than 100 members, some from various parishes in St. Louis, as well as alumni who were "coming home" to be part of this remarkable choir. As old friends recognized one another, there were hugs and warm wishes realizing the almost magical moments created by singing such inspiring, original music over the years.

In the 2019 hymnal Breaking Bread, there are more than 40 Jesuit songs represented, a tribute to the lasting vitality of the music of the St. Louis Jesuits.

During rehearsals I felt tears of joy and gratitude hearing our Jesuit composers sing and direct music that has inspired life-changing decisions, helping some of us cope with moments of loss, betrayal, joy, gratitude and dedication. At times their once-vibrant voices would weaken with the weight of years, but with humility and renewed dedication, they continued the song, once more inspiring hope.

During our final rehearsal, when Bob Dufford sang his newly composed third verse to "Be Not Afraid," I could tell many were deeply moved by his words: "And when the earth has turned beneath you, and your voice is seldom heard, when the flood of gifts that blessed your life has long since ebbed away, when your mind is thick and hope is thin and dark is all around, I will stand beside you till the dawn."

Unfortunately, during the performance he acknowledged to the audience that he had forgotten to sing the third verse.

I hope careful choir directors add it to the song and include it in their repertoire, since it is a powerful and poetic reality check for many.

The proceeds from "Coming Home" will go toward the Ignatian Spirituality Project. According to its website, the project's "network has grown to almost 30 cities across the US and Canada and includes over 800 volunteers serving over 2,000 retreatants a year through 200 retreats."

As the website states, the Ignatian Spirituality Project "offers men and women who are homeless and in recovery the opportunity to change their lives. … Ignatian retreats are an effective and important resource in laying a foundation of hope which can lead to further and long lasting transformation."

With deep gratitude to the St. Louis Jesuits, in reliving the September performance I can honestly say I felt a true sense of "Coming Home."

A virus arrived, and changed our world