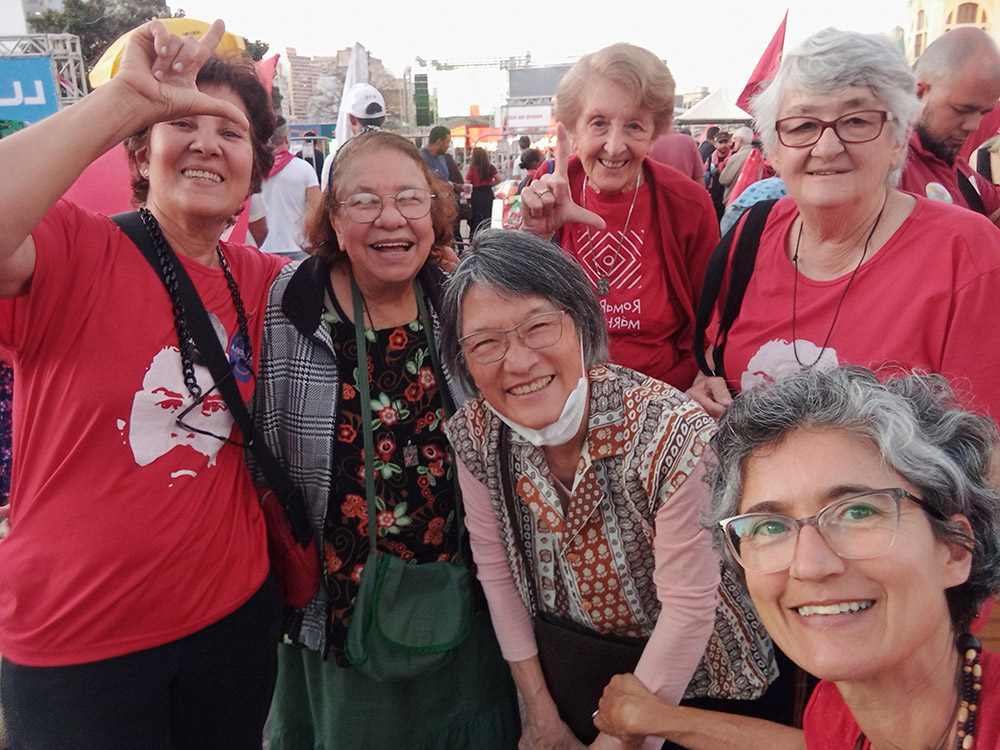 Some sisters of the community of the Carmelites of Charity of Vedruna, in Belo Horizonte, Brazil, meet Nov. 3 to evaluate their actions in the electoral campaign. Red is the color of the Workers' Party — the color of the party that elected Luiz Inácio Lula da Silva president. (Virma Barion)

The political campaign for the second round of the presidential elections in Brazil, in October of this year, was very polarized. The far right was represented by then-current President Jair Bolsonaro, and former President Luiz Inácio Lula da Silva represented the left.

The campaign threatened the moral, ethical, religious and cultural values ​​deeply rooted in our Brazilian population. The abuse and manipulation of religion and faith; misinformation; the abuse of authority; the promotion of violence; and the accusations and blatant lies that daily filled social media all had a single objective: the counting of votes.

The complex reality of what is happening in my country saddens me. We are a religious, happy, supportive, welcoming, peaceful, festive people, who like to be with our families. The last four years of government, culminating with the electoral campaign, caused serious divisions among us and the annulment of the values ​​and principles that govern our Brazilian society.

The division fragmented our society, relationships, and even affected churches and consecrated religious life — two pillars whose mission is to be bearers of hope and prophecy, characterized by following the Master Jesus of Nazareth, who came to bring abundant life to all (John 10:10).

The polarized division provoked quarrels, intrigue and death within families, churches, groups of friends, and Christian and religious communities. The most regrettable thing was listening to people who — in the name of the Gospel and of Jesus Christ — defended projects of death such as torture, the extinction of the poor, gender violence and racism, and promoted a perverse religious fundamentalism.

It was impressive how Bolsonaro's campaign captured and manipulated the deep religious sentiment of the Brazilian people and put democracy and the country's historic destiny at stake. The people were confused by a whirlwind of lies published daily and promoted by a real "war" on social networks, which caused a vertiginous increase in division, anxiety and violence.

I read somewhere that Alexandre Brasil Fonseca, sociologist and professor at the Federal University of Rio de Janeiro, observed that a significant part of the Brazilian population shared the feeling that in Brazil many people seem to have been pushed into a "crusade" caused by fear. People of different faiths and even atheists seem to be in a moral panic.

Faced with this situation, many bishops, priests, congregations and conferences of religious of the Catholic Church, and also some evangelical pastors, took a prophetic position and made their positions public, trying to promote the life and dignity of all people, and guarantee the rights acquired and the democracy inspired by Jesus Christ in his work for the kingdom of God.

But there were others who, in the name of this same Gospel — perhaps for lack of awareness of the reality or to receive some benefit — sided with those who defend their power with all their strength and weapons.

Many people — especially Afro-descendant peoples, Indigenous communities, riverine peoples and Amazon defenders — have felt discouraged in the last four years, without hope of important change. They have lived in a situation approaching despair, because they have not had access to basic needs such as work, food, housing, health, transportation or education.

How does consecrated religious life position itself? There are very different positions, some of which have generated discomfort within our congregations, and within the conferences of religious.

The National Conference of Bishops of Brazil and the regional conferences of the Conferencia de Religiosas do Brasil (Conference of Religious of Brazil) in general were in agreement with the proposals presented by Lula, and they publicly stated their position in favor of democracy, peace and the social rights of the nation as a whole.

We have also heard some who, in the pulpit or in their social networks, sided with Bolsonaro's line.

I was filled with joy to see that a large portion of consecrated men and women who are natives of the country or missionaries from other countries were committed — even to the point of risking their lives — to warn about the danger of worsening what we have already experienced over the past four years. Declaring oneself on the side of the Gospel was already putting one's life in danger because the project of the kingdom of God is exactly against the use of religion for one's own benefit, which would be the profanation of the name of God.

Being followers of Jesus and his Gospel is incompatible with defending an armed, violent homeland marked by hunger, exclusion of fundamental rights, and contempt for life — especially in the time of the COVID-19 pandemic.