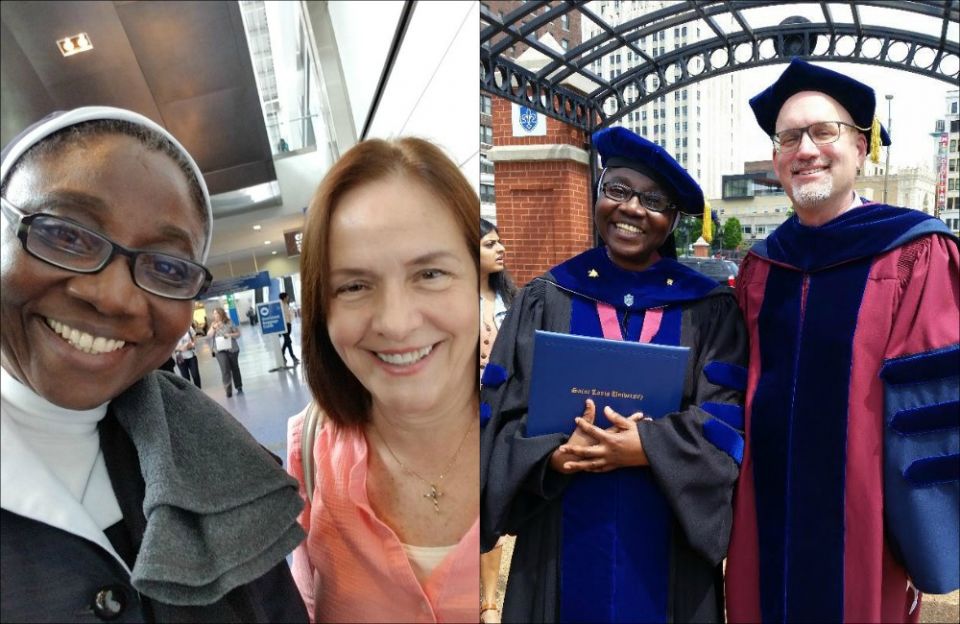 My "first season" began in August 2006, when I arrived for two years of graduate study at Loyola Marymount University in Los Angeles. In the first few months, I experienced several culture shocks!

Coming from Nigerian culture where greeting is a major part of our social life, I found the paucity of exchanging pleasantries pretty strange. And after more than 40 years in a country where community life is highly prized, the culture of individualism in the USA affected my self-esteem rather significantly — until I realized that being "ignored" was not to be taken personally.

Another cultural divergence was my Nigerian accent, and British grammatical structures. Fresh in my memory (though no hard feelings!) was a mild altercation between me and members of a small discussion group. Each time I began to respond to our four assigned questions, others cut in quickly and moved on to the next question whenever they were done airing their opinions. I was dazed when — the last question having to do with culture — the leader of the group turned to me and said, "Now, that's your area, handle it."

It then dawned on me that not allowing me to contribute to previous questions was done on purpose. I felt compelled to let them know how demeaning it was to me for them to decide when I could or could not take an active part of the discussion.

Quizzical looks and verbal expressions sometimes trailed my utterances because, as I was often told, I had an "accent." After a while, this reaction didn't bother me as I realized it was a cliché that would accompany me as long as I did not master and utilize the American accent.

My first Sunday on the campus I met a sister who wore no veil. She gave me an icy look, and that motivated me to do away with my veil, too. Hesitantly, I decided to move around the campus incognito as she did. I kept my veil stored in my closet. Some colleagues and staff still knew my identity as a consecrated person through class introductions or through another Sister of St. Louis who was on the Loyola Marymount staff.

As I neared the end of my studies, I decided to wear my veil again, and was amazed at the reactions. One Sunday evening after the student mass I met a male student who exclaimed with a broad smile, "Wow! Sister, I am so happy to see a nun around!" However, my resolve to be incognito made me store my veil again.

Students in the freshman hall where I was resident minister knew I was a sister, with or without my veil. There, I had the rare privilege of accompanying them on their spiritual journey both in structured (Christian Life Community) and in less formal ways, like encouraging Mass attendance and active participation. Those were life-giving moments!

I left Loyola Marymount 22 months later; I had enjoyed a full scholarship, free accommodation, and worked on campus. I had reveled in the love of my community (Sisters of St. Louis), the staff, and new friends. I had grown intellectually and spiritually, done ministry, and was inducted into two honor societies. I even got to enjoy the wonderful support of my biological family in the USA and Canada.

Nine years later, preparing to return to the USA for further studies, I reread my journal for the first time. Reading it, I was shocked to discover that I had suffered from one sickness or another almost every day. What precipitated the aches and pains? I realized: It was loneliness! Loneliness! Loneliness!

I was puzzled when I remembered how well I seemed to adjust. How could being lonely trigger intense physical misery?

Without any answer, off I went to my "second season" for further studies at St. Louis University in Missouri. Before I left Nigeria, a friend alarmed me with news that St. Louis was rated one of the most dangerous cities in the USA, with racial profiling of the Black community.

However, on Jan. 12, 2017 — despite a threat of storms and after a seven-hour trip from Nebraska with my brother and nephew — I arrived at St. Louis University, and was embraced by the delightful community there.

I immediately fell in love with the rough-looking environs of the university. Wondering whether being Black and going incognito contributed to my loneliness during the first season at Loyola Marymount, I decided to experiment and wear my habit, going everywhere in my veil as I would in Nigeria.

Wow! It worked! Maybe it was the veil, or differences between Western and Midwestern cultures, or lessons from my previous experiences in California, but here I enjoyed many and varied friendships.

Although unlike my "first season," I had no scholarship or campus job to help relieve the burden of international tuition, I had many wonderful friends with whom I spent a great deal of time. Most of them reached out to me first. I will never forget people in the church welcoming me. Now and then, they invited me to other Catholic churches to have a varied experience of the spiritual life in St. Louis.

I met many interesting people: One I will never forget was Sister Carol, one of the ministers in our college chapel. She welcomed me most warmly on my first day at Mass and had tears in her eyes when I announced my farewell. Though she is white and I, Black, what bound us together was sisterly love! She was a delight, and reminiscences of her welcoming smile warm my heart till this day.

Shopping, studying, visiting, sharing our stories — both joyful and challenging — helped us to grow our friendships. I was especially touched when my atheist Chinese friend wanted to know the "One" in my heart who enables me to forgive easily.

Faculty members made academic pursuits a delight, and my adviser remains my mentor, friend and role model. Going over and above the call of duty, she made every meeting we had a uniquely beautiful encounter. My most heartening experience was when she declared that I had helped her faith life to grow.

Generally, people seemed easily drawn to me, and wanted to know more about this consecrated woman from Africa: my vocation, country, discipline, future plans and family. Some of the questions may have come out of stereotypes, but I was never sure.

Some assumed I was studying for a masters' degree or doing theology, until I told them I was a doctoral candidate in curriculum and instruction. Some had never heard of the Sisters of St. Louis to which I belong. Questions about future plans often included whether or not I would return to Nigeria.

I left St. Louis full of joy, with a journal filled with reflections. I realize I am left with many questions that may never be answered. I suspect it was the beautiful friendships I made that made my second season so successful. But I am grateful for all!

Zest for life: Letting go as a contemplative community