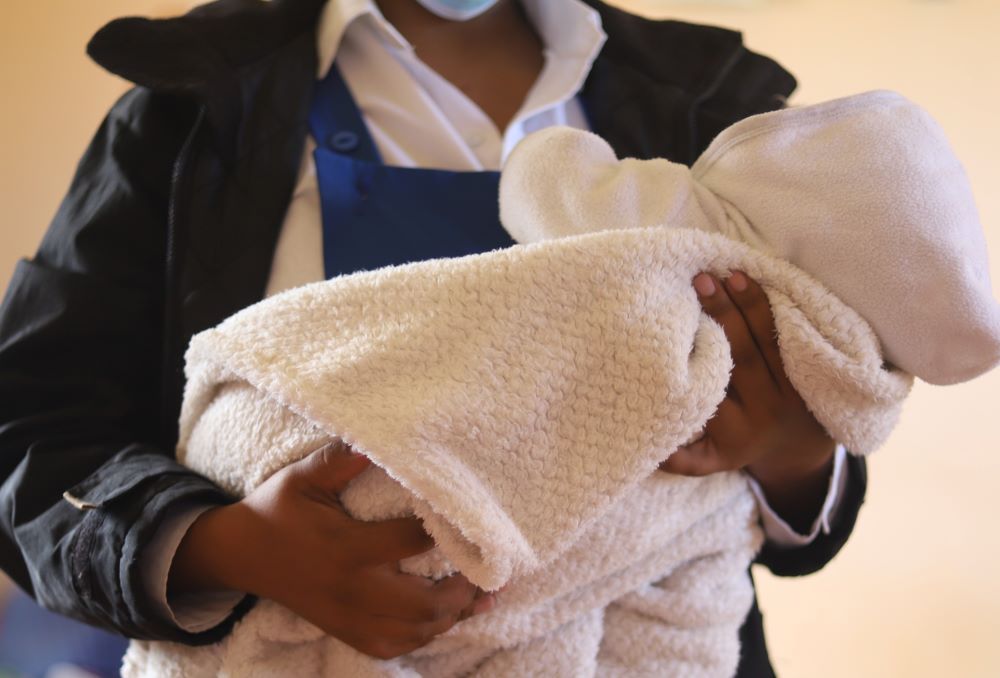 BEREA PLATEAU, Lesotho – Susan tries to smile as she holds her crying baby while seated on a mattress in a small room at Good Shepherd Centre for Teenage Mothers. But it does not entirely erase the pain in her eyes.

The 17-year-old dropped out of 10th grade last year after a 30-year-old farm laborer got her pregnant. Her grandmother, with whom she lived, became disappointed after learning she was pregnant and, together with her uncles, chased her out of their home.

She sought refuge at the Good Shepherd Centre for Teenage Mothers in Berea Plateau, a small mountainous town about 12 miles from Maseru, the country’s capital. The Good Shepherd Sisters of Quebec of the Lesotho Province run the center, which they founded in 1995.

"I had nowhere to go, but when I arrived at the center, the sisters happily welcomed me," she said. "My relatives told me to leave our home because I would embarrass them. The sisters have been of great help to me. My son is being taken care of at the daycare while I am training in dressmaking."

Susan (who asked not to use her real name) said her problems started at age 4, when her mother left her with her grandmother to go to South Africa to seek a job. She never returned. Susan said her mother's absence greatly contributed to her current situation because she had no one to advise and guide her. 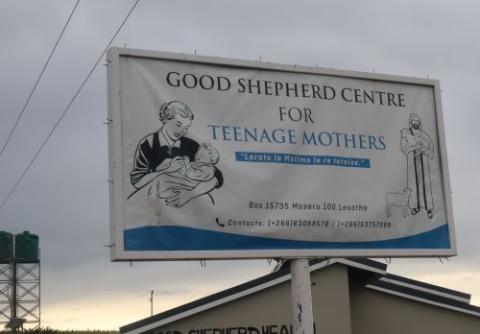 The Good Shepherd Centre for Teenage Mothers in Lesotho provides young mothers who are battling poverty and illness with a safe and supportive place to live while they learn to care for themselves and their children. (GSR photo/Doreen Ajiambo)

"My uncles used to tell me that my mother abandoned me and went to South Africa for work, and later on, she died of HIV," she recalled, tears streaming down her cheeks as she tugged nervously at her blouse. "I don't think she ever loved me at all."

Susan's story is far from unique: Thousands of girls in this tiny landlocked country in southern Africa are forced to abandon their education as punishment for being pregnant. Because the country's culture discourages premarital sex, a girl who becomes pregnant before marriage is likely to be excluded or banished from her community or family and is referred to as a "spoiled girl."

Religious sisters try to help these teen mothers with a safe and supportive place to live while they learn to care for themselves and their children. 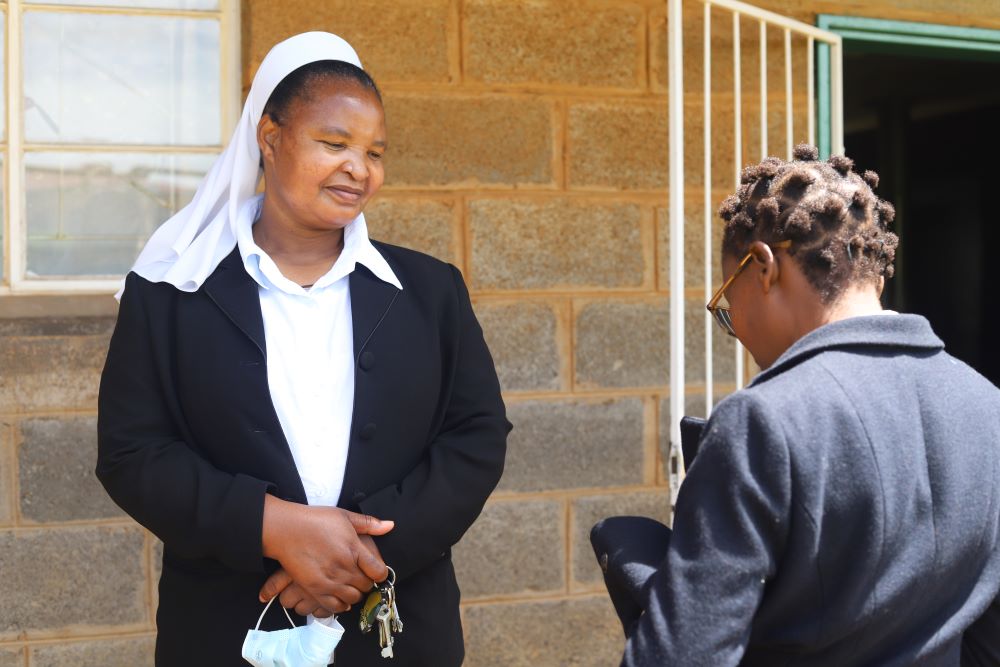 In Lesotho, pregnant girls are left on their own and it seems their life is over, she said.

"We started the center because we saw the challenges of teenage mothers," said Hlobotsi, the center's outgoing administrator. "When a girl falls pregnant while still in school, they are sent away, which means their education stops there. Most of them are chased away from their homes, and because of this, they used to come to our convents asking for any help they could get.

"We realized that others were undergoing abortions, and some even died during the process."

The cause of teen pregnancy

A United Nations Population Fund report indicates that Lesotho is among the leading countries in early and unintended pregnancies, with the adolescent birth rate at 94 per 1,000 girls age 15-19.

Analysts have blamed high poverty and unemployment as the leading causes of early pregnancy in Lesotho, a high-altitude kingdom encircled by South Africa. With a 36% poverty rate, the country of 2.2 million is experiencing nearly 25% unemployment, a rate that is projected to remain high due to the effects of the pandemic.

The situation has forced thousands of Basotho (the people of Lesotho) to migrate to neighboring South Africa to work in its mines and as domestic workers to provide for their families back home, Hlobotsi said, a trek that puts women at risk of getting trafficked. The children, meanwhile, are left under a relative's care. 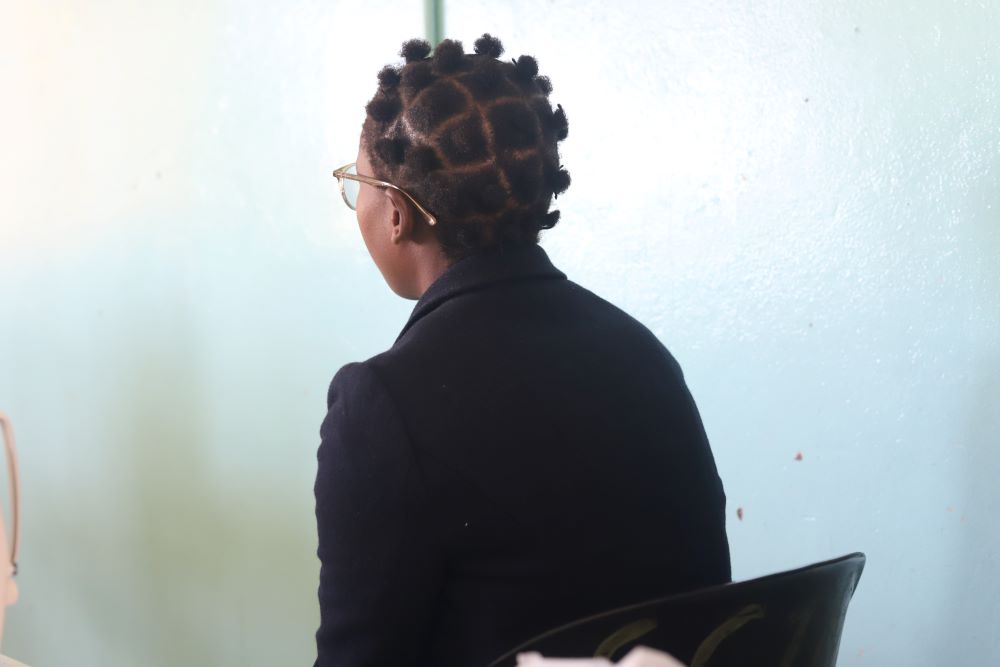 Nthabeleng Ntoko, 27, whose parents abandoned her for jobs in South Africa, got pregnant at 16.

Ntoko, who lives at Good Shepherd with her child, said a man in his early 40s who was working at Letseng Diamond Mine near the border of South Africa would give her a lot of money when he visited.

"I would not have been pregnant if I had parents to guide me," she said, adding that her uncles kicked her out of their home after realizing she was pregnant. "Everyone in the community didn't want to see me. I was forced to drop out of school and seek refuge at the center."

"I didn't know anything about sex and love," she added. "Maybe my mother or father would have advised me to abstain from sex to avoid early pregnancy. I needed that knowledge at the time, but it was not there."

'Here to look for money'

In Lesotho, like in many other mining countries, women are not allowed to work in mines or engage in dangerous tasks. Young women — some underage — follow men working in mines along the borders and in South Africa, selling sex to older men to support their families.

Global Sisters Report visited Maputsoe, an industrial town in northern Lesotho, to meet men and women engaging in sex for money. Maputsoe is a border town where mineworkers heading to their workplaces from Lesotho stop to have fun and party before crossing the border to South Africa. Dubbed the town that never sleeps, Maputsoe is loaded with tourism activities, including taverns, traditional dance performances and strip clubs. 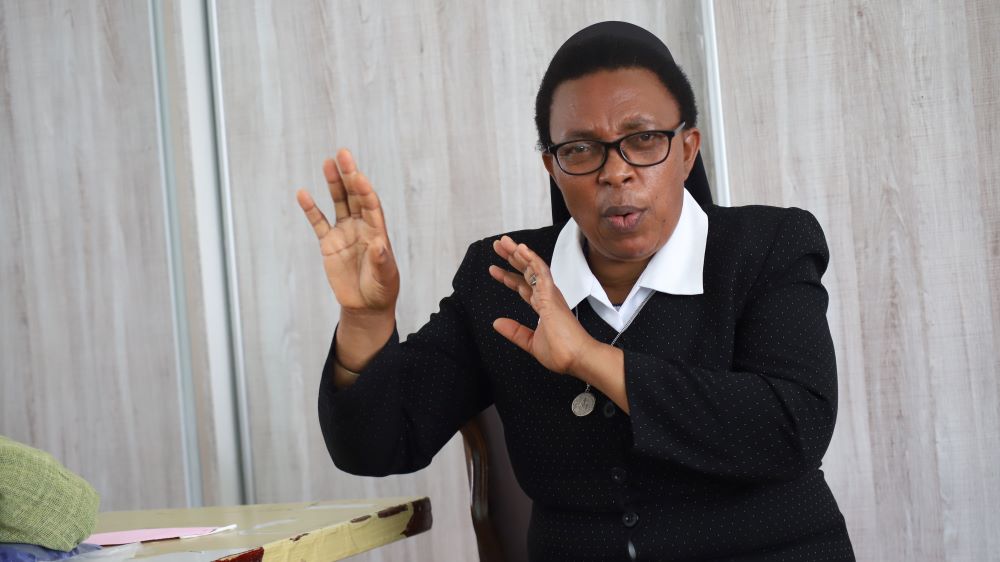 Good Shepherd Sr. Filipina Hlobotsi speaks about how the center supports teen mothers by offering them shelter and teaching skills such as sewing, catering, decorating, computer training, and animal husbandry to care for themselves and their children. (GSR photo/Doreen Ajiambo)

It is just past 7 p.m. on the last Saturday of the month. The streets are still full and buzzing with activity, with no signs of slowing down. Hundreds of near-naked girls and women parade through the town's bars, brothels and streets, advertising themselves to miners approaching them.

"I am here to look for money and assist my two children," said a 35-year-old woman with braided hair and wearing a skimpy blue dress. "It's the end (of the) month, and most miners here have received their salaries, so we take advantage of this time to make money."

The woman, who requested anonymity, said she left Maseru two years ago, after her husband went to South Africa to look for a job but never returned, leaving her to care for their children.

"It's not easy to raise two children as a single mother," she said, adding that she left her children with her mother. "On a good night, especially at the end of the month, I make up to 500 Lesotho loti (about $30) and send that money back home."

One miner told GSR that because men left their wives at home, they can't resist paying women for sex. "Every weekend we go to the neighboring villages and towns to look for women so that we enjoy and relax while taking alcohol," he said. "The only way a man finds pleasure is by having a woman." 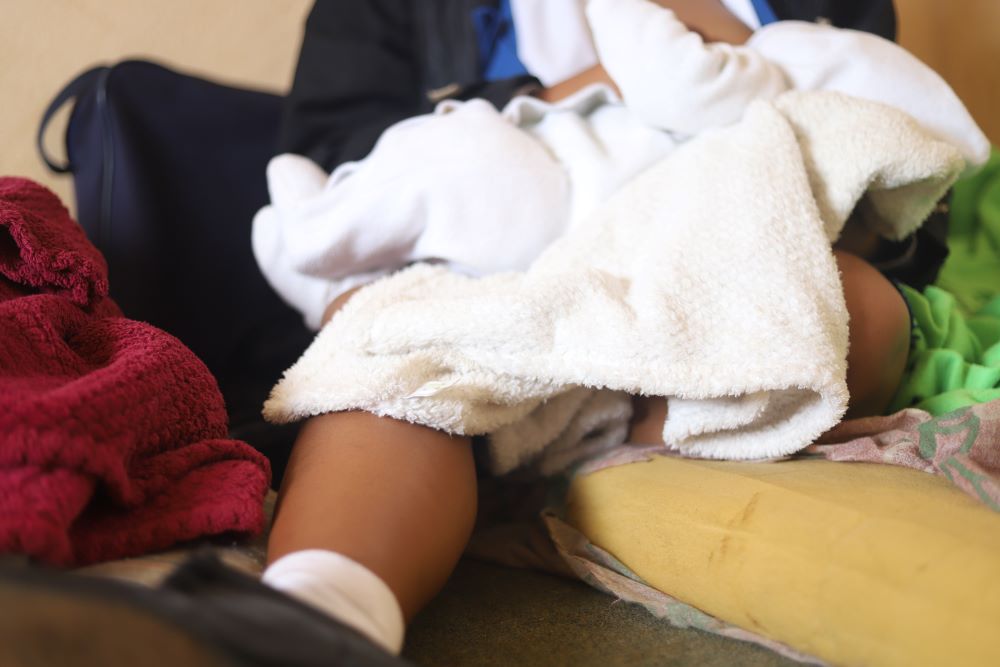 The 55-year-old noted that most men don't use contraceptives to prevent pregnancy or sexually transmitted diseases, saying they are not easy to find in the region. "We don't have condoms here, yet we sleep daily with different women and girls," he said.

The activities make Lesotho one of the highest HIV-infected countries in the world. According to data from UNAIDS, about 1 in 6 people in Lesotho lives with HIV, and more women are affected than men: 27.7% of women live with HIV, compared to 19.7% of men.

"Men working in the mines have a lot of money, and they use it to entice young girls they are not interested in marrying because they have their wives," Hlobotsi said. "These men end up leaving these young girls with pregnancies and, in the worst scenarios, HIV. The young girls are forced to drop out of school and are left to take care of their newborns without knowing how to breastfeed, diaper, bathe and other baby care concerns." 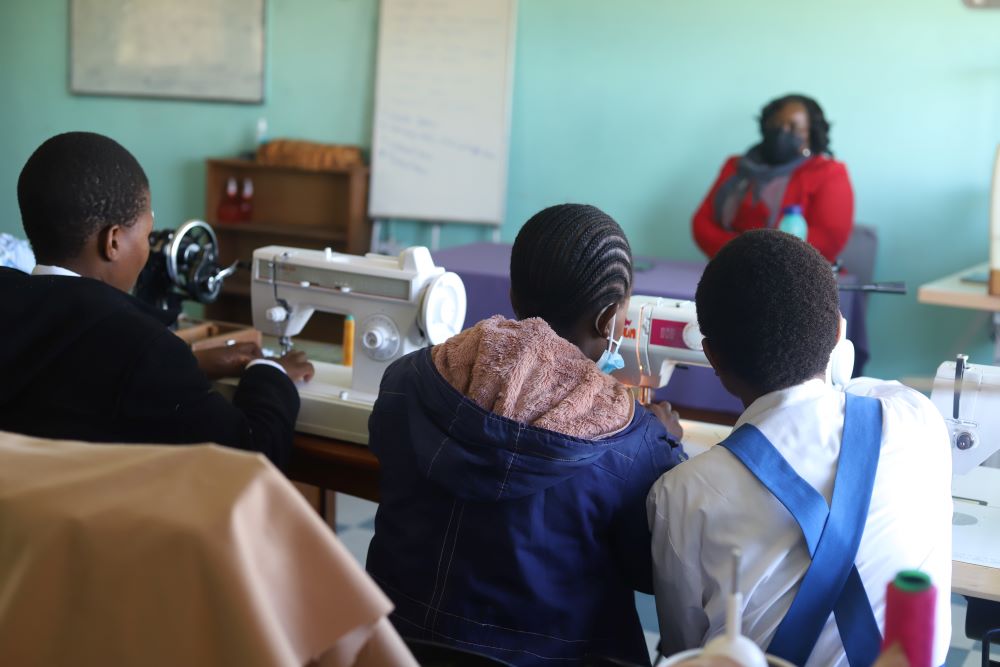 Religious sisters have launched initiatives to address this worrying trend.

"We are empowering these young mothers with skills so they can take care of themselves and live decent lives," she said, noting that the center also welcomes sexually trafficked and abused women. "We don't discriminate. We admit all young mothers and those facing other abuses regardless of their faith, level of education or social status."

The sisters have opened the school to the community, allowing parents to drop off their children to study, charging a fee that then helps the sisters manage the school and center.

They also have a health facility that serves teen mothers and the surrounding community.

"When the girls get here, they have to be tested for HIV, and also they have to start their antenatal care," said Good Shepherd Sr. Rosemary Mokebe, who now directs the center. The women learn how to live with the disease, she said, adding that the sisters and staff accompany the women through their delivery and recovery, also looking after the children's well-being.

Mokebe plans to expand the center's projects, including sponsoring advanced education for girls who want to become professionals.

"We can’t just stop these young girls from achieving their dreams just because they became mothers at a young age," she said.

To reduce the alarming rate of teenage pregnancies in the country, sisters have started an awareness campaign directed at leaders and elders of communities, as well as parents and children. And every three months, sisters visit men working in the mines to talk to them about the importance of respecting and caring for children. They also visit villages and homes to encourage young girls and boys to abstain from sex, to educate them about the dangers of contracting HIV, and urging parents to embrace their daughters if they get pregnant unintentionally.

"We are happy because our message is being received positively, and we believe we will be able to eradicate the vice," Hlobotsi said.

"Those older men taking advantage of young girls should be jailed," Susan said. "Most of the people who [got] us pregnant are out there, and they continue to destroy the lives of other young girls."