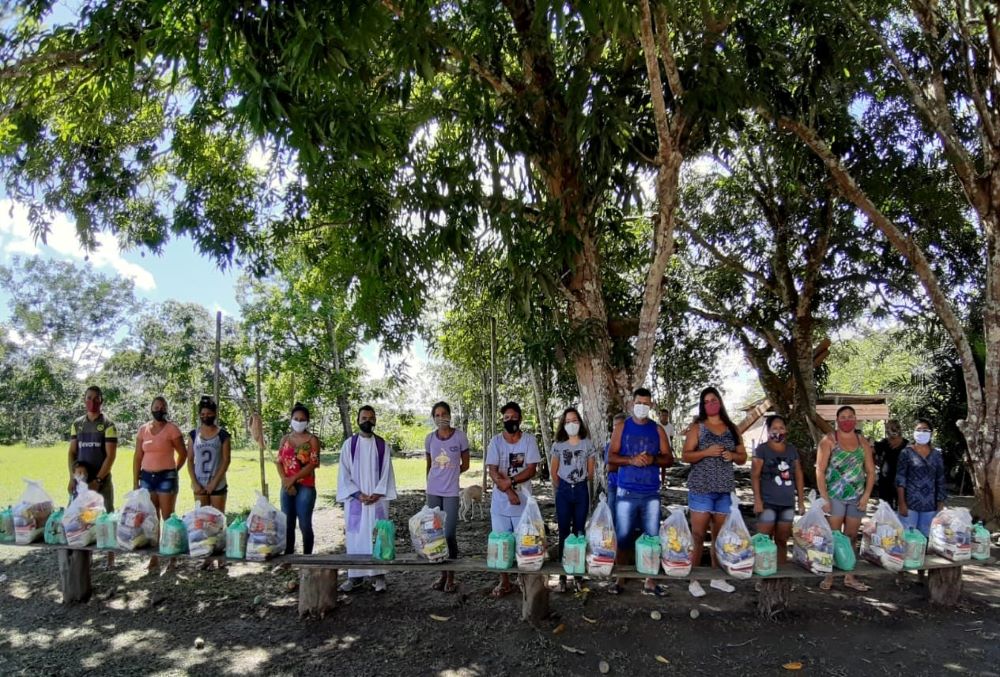 Members of the Comboni Missionary community in Brazil prepare to share food baskets during the COVID-19 pandemic. (Caterina Ingelido)

For the last three years — out of 21 working in Brazil — I have been working in the Amazon Basin, in the state of Rondônia, coordinating the network A Cry for Life and facilitating workshops for people who live along the river. This network is an integral part of the Conference of Religious of Brazil, which emphasizes "evangelizing action in the face of the dehumanizing reality of human trafficking."

Many people in this region fall victim to human trafficking because of the geographical position of Porto Velho, Rondônia’s capital, and to its international airport that effectively connects the trafficking routes. One of my tasks is to make the network known in schools and parishes, and tomake people aware of the significant problem of human trafficking.

Many victims work in exchange for a plate of food, and they often remain in debt to those who contract them for work, because they are charged for traveling expenses and work tools. As for the women, they almost always end up being sexually exploited or working as domestic workers. A Cry for Life has followed up on many cases. Still, there are several challenges: first, to help the trafficked person recognize that he/she is being trafficked, then encourage him/her to denounce and/or run away, and, finally, to support the victim because he/she has nothing: no shelter, no money and no documents.

Click here to see all of Global Sisters Report's coverage of human trafficking.

The following story reflects the situation of most of the victims. A young woman living here in the north of Brazil was convinced by a friend to go to Europe to work. She set off to go to Europe, leaving her two young daughters with her parents. At São Paulo's airport, a stranger was waiting for the woman. The person told the woman that her friend, who was supposed to travel with her, had been arrested because she was carrying drugs in her suitcase.

When the woman arrived at her destination, another person was waiting for her and she was forced into sexual exploitation. She was allowed to communicate with her parents, but always in the presence of her traffickers — to ensure that she would tell her parents only what the traffickers wanted her to tell. At first, she called weekly, then monthly, then every other month, and finally every three months. When her parents asked her when she would be back to Brazil, the answer perplexed them because she said she had to work long enough to cover the cost of the trip.

Fortunately, one of her aunts acquainted with A Cry for Life contacted us, telling us what was going on with her niece and her intuition that something might be happening to her. With the assistance of the network and the intervention of the federal police, the woman's whereabouts were traced through the phone calls.

When the police rescued her, the Network provided a hidden place away from her parents' house and psychospiritual therapy till she was in a condition to take care of herself and her daughters. Then she and her daughters were relocated to an unknown place to keep the traffickers from finding them. As you can imagine, once a person falls into this trap, the way out is difficult; many victims die by suicide, or the traffickers kill them. 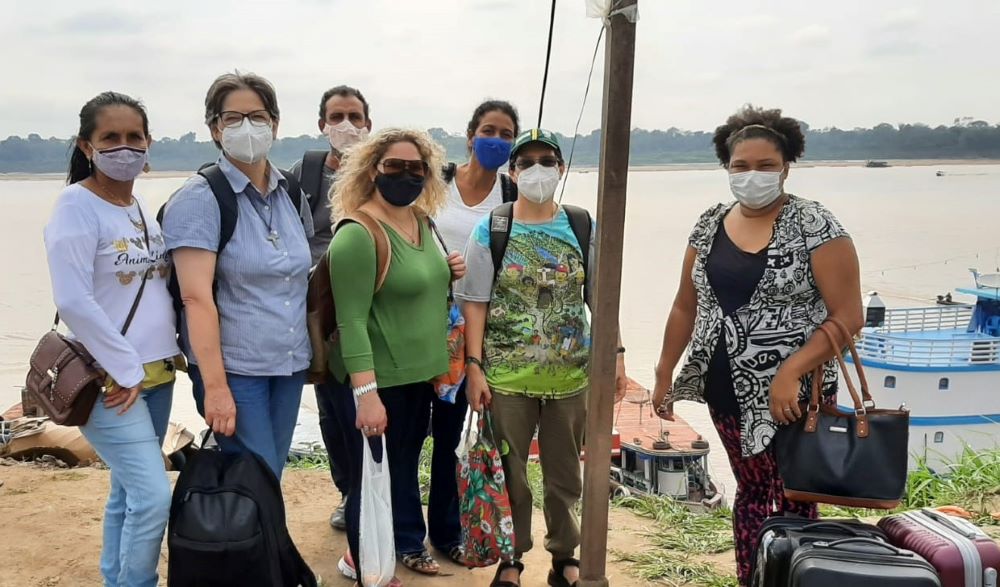 A group from the ant-trafficking network A Cry for Life prepares to leave for a trip down the Amazon River to work with women. (Caterina Ingelido)

Our commitment to preventing people from being trafficked is shown through our efforts to make as many people aware of this reality as possible.

In Porto Velho, the network works to prevent the human trafficking of Venezuelan immigrants. Since 2018 Venezuelans have been passing through Porto Velho City, intending to move to bigger Brazilian cities. However, the pandemic stopped them from reaching their goal, and they had to settle here. The significant number of people and the few job opportunities made them a vulnerable population that struggled to meet their basic needs, especially food. That made them easy victims to fall into the traffickers' hands.

In Porto Velho, the network works with Venezuelan immigrant women through workshops on handicrafts, cooking and baking. The objective of the training is to ensure that the women will have a source of income for their families and won't be lured by false promises. During the pandemic shutdown, each woman persevered in doing her best to sell her products. Recently, after the reopening of activities, we held the first town fair to offer their products. In addition to selling their products, the goal was to make people aware of the women's work, expecting that local people or businesses would eventually employ them. The network will continue training women as long as people of goodwill continue supporting the project.

It is rewarding to see how happy the women feel having the leading role in providing for the needs of their families. One of them testified that her life was very difficult and told us she cried every morning, knowing that she didn't have anything to feed her three children. When the network offered the woman the catering training course in Caritas, she thought she could not learn, but the situation she and her children were experiencing motivated her to try. Today she is grateful and proud of what she has accomplished. She is now the first one to encourage other women never to give up the opportunities God sends through the people they meet in daily life.

Unfortunately, we face many challenges, especially that of lack of financial resources for mobilizing and printing materials to continue making other people aware of the evils of human trafficking. Because of limited resources, it is difficult to follow up on the various commitments and provide more coverage in schools and pastoral activities. On the other hand, this lack of resources motivates us even more, to continue training new leaders to multiply the activities as far as possible.

Sometimes we encounter obstacles to partnering with other networks in the city. We realize that many people do not believe what is happening in their communities; they find it difficult to see and accept the reality of trafficking. The denial of this reality that is right in front of them makes them more vulnerable to becoming victims themselves.

The trauma and suffering the victims went through motivates and strengthens us as a group to continue walking and defending life! Life that is often seen by society and the globalized systems as worth only what it gives in exchange — and in the language of trafficking, that is only profit. Trafficking is a crime because it violates human rights. Our network will keep listening for the victims' "cry for life."