by Christopher White
News
This article appears in the Synod on Synodality feature series. View the full series.

Pope Francis is reorienting the power structures of the Catholic Church from a vertical, top-down style of governance to a circular, more relational approach through the global synod process, according to Xaviere Missionary Sister Nathalie Becquart. 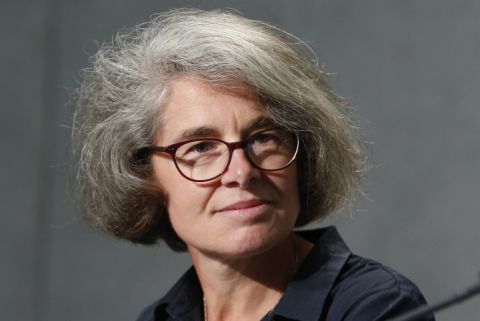 "The focus is no longer first on the primacy at the top of the pyramidal view. The focus is first on all of the people of God," said Becquart, who is the undersecretary of the Vatican's office of the Synod of Bishops.

"Papal primacy can no longer be conceived on its own or in itself, and it is clear that for him [Francis], primacy can only be exercised in relationship to and with all the members of the people of the body of Christ," she continued.

Becquart's remarks came during an Oct. 22 lecture on "Primacy, Collegiality, Synodality: The Experience of the Synod of Bishops" at the Pontifical University of Saint Thomas Aquinas.

In a comprehensive hourlong address, Becquart offered a sweeping overview of the historical tension between papal primacy and collegiality among the church's bishops — both of which have often been at odds with the laity.

One of the important developments after Vatican II, Becquart said, has been the creation of the Synod of Bishops to allow more collegiality in church governance.

Francis, she noted, has put a "spotlight" on that and has discerned that synodality is the mechanism to properly implement the Second Vatican Council to restore a better relationship between the pope and bishops, as well as all the people of God.

"Pope Francis' style of primacy is a primacy of listening that works from the bottom up and envisions a position of the primacy within a circularity of relationships with bishops, that is collegiality, and with all the people of God," Becquart said.

She offered a stark contrast between the church with a pyramid-like leadership structure with the pope at the top, now under Pope Francis, to the pope, bishops, and the laity sharing in a circular "interdependence," similar to that of the Trinity.

"The vision of synodality and the synodal church is truly rooted in the mystery of the Trinity," said Becquart, adding that this understanding of the church operates through "mutual discerning in which everyone has something to learn."

"The aim of this synodal conversion is to retrieve the style of the early church that was a synodal church in which no one decided alone," she said.

Becquart's remarks come nearly two weeks after Pope Francis launched the global synod, where, quoting the influential Dominican theologian Fr. Yves Congar, he said "There is no need to create another church, but to create a different church."

After gathering delegates from around the world for a two-day meeting in Rome, the first phase of the newly revamped synod process is underway with an unprecedented consultation phase with local churches. The ambitious goal is to give every single Catholic — and even those outside the church — an opportunity to participate.

Becquart acknowledged that this was not without challenges and complications, but she said that after decades of sexual abuse and abuse of power, the synodal process that listens to all is the way for the church to become less clerical.

Just one day before her lecture, German Cardinal Gerhard Müller, the former head of the Vatican's doctrinal office, appeared on the Catholic television channel EWTN, where he criticized the broad consultation process.

"It's not necessary," he said of the synod's goal to involve more lay participation. "It's more important that they read and listen to the word of God and not make a collection of some ideas."

"The aim of this synodal conversion is to retrieve the style of the early church that was a synodal church in which no one decided alone."

— Sr. Nathalie Becquart, undersecretary of the Vatican's office of the Synod of Bishops

"I personally deserve attacks and insults because I am a sinner, but the church does not deserve them," the pope said at a meeting with Jesuits during his Sept. 12-15 visit to Slovakia. "They are the work of the devil."

Yet neither Becquart nor Francis seem deterred by criticism of the synod process.

During her lecture, Becquart said that the "point of departure" and the "point of arrival" of the synod is "with the people of God."

"This change is significant and constitutes nothing less than the reconfiguration of the Catholic imagination regarding the way we look at the church," she said. "In this sense, the pope has pushed the reset button of our reception and interpretation of Vatican II."

"We are called to get rid of a pattern of competition to enter into a pattern of cooperation and circularity," she concluded. In doing so, "We will be a church more faithful to God."

Related: Meet the challenge to promote synodality with Pope Francis