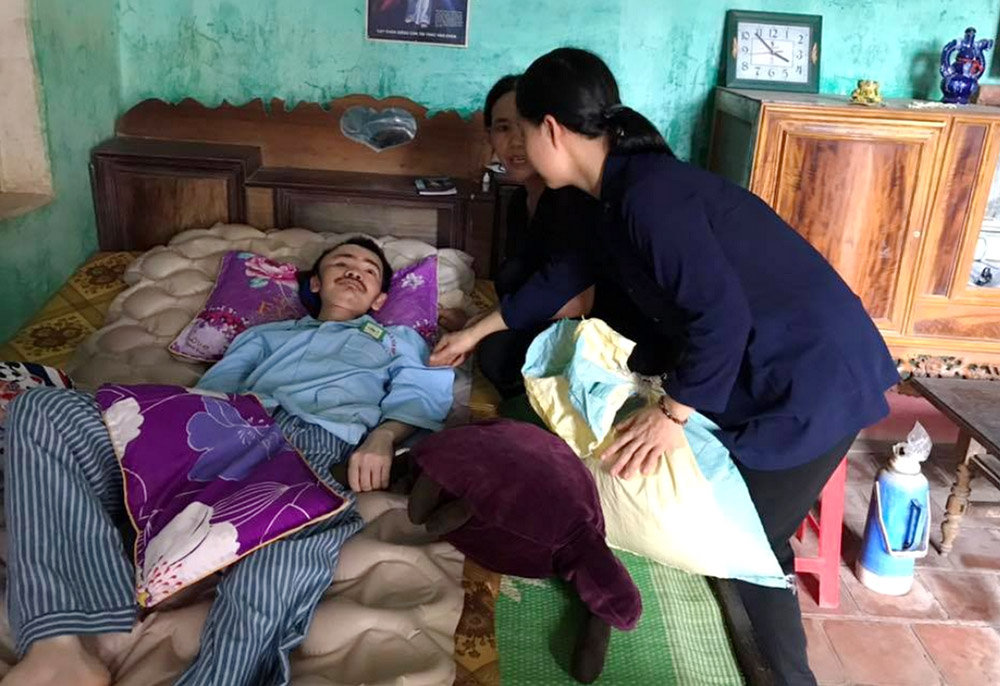 Daughters of Our Lady of the Visitation Sr. Mary Bonaventure Nguyen Thi Thien (second from right) and another sister visit Bartholomew Tran Dao The at his home Aug. 6. (GSR photo/Joachim Pham)

Three years ago, Bartholomew Tran Dao The was diagnosed with renal failure after he noticed gradual swelling on his body.

At first, The, who worked at construction sites for a living, had to undergo kidney dialysis at the Central Hospital based in Hue, capital of Thua Thien Hue province in central Vietnam.

Now, The undergoes dialysis three times a week — a procedure that lasts four hours each time — and has to take a taxi to the hospital, as his blood pressure prevents him from riding his motorbike.

Because The, now 43, can't work, his wife sells food in the street, and his two children had to drop out of high school to work at construction sites for a living. They've had to sell their motorbike, clothes, and two gold wedding rings for 17 million dong ($717) to pay for his treatment. Every month, he pays more than 5.2 million dong ($226) for the life-saving treatment.

"I am a bit down in the dumps because I could not do anything for a living but have to be on dialysis until death," said The, now thin and pale, with a tired voice. "I am still alive thanks to the emotional and material support from sisters."

According to the Vinh Diocese's Ministry Committee for Patients, based in Nghe An province, patients with chronic kidney failure are physically and mentally worn down to death, and it is painful for them to spend the rest of their lives on dialysis machines at hospitals.

The committee, whose members are Catholic sisters and priests, stated that many have no one by their side and experience terrible loneliness having been away from home for a long time. Some are frustrated and desperate about the disease and even want to die on account of financial burden.

The committee called on people to make donations to patients who undergo dialysis at four hospitals in Vinh, the capital of the northern central province of Nghe An. Most kidney patients gather in big cities in the country for medical care, as other places lack specialized equipment. 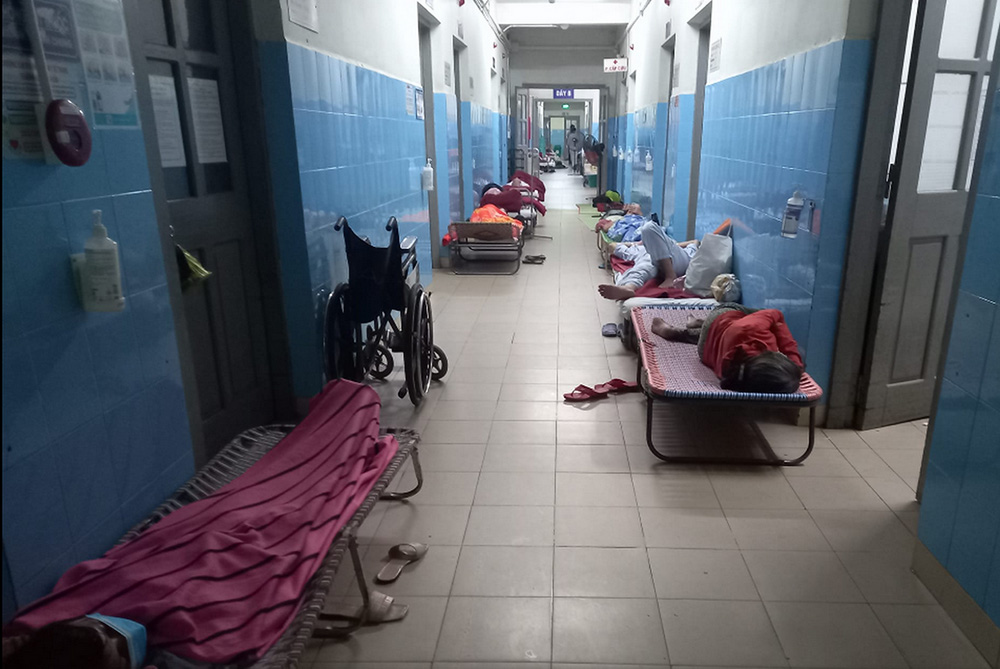 Patients take a rest along the hallway after dialysis in Hue Central Hospital in Vietnam. (GSR photo/Joachim Pham)

Daughter of Our Lady of the Visitation Sr. Mary Bonaventure Nguyen Thi Thien said that she and other sisters met The at the end of 2021 at the hospital, where he asked them to pray for him to be in peace and return to the church. He had ignored faith practice as he was desperately disappointed by his debilitating illness.

"We regularly pray for him and call on benefactors to come to his aid," said Thien, who heads a five-member community in Thua Thien Hue province's Phu Vang district.

She said The is one of 65 kidney patients who are given a monthly allowance of 1 million dong ($43). Nuns visit and administer the Eucharist to him while other sisters and lay associates offer him food and pray at his home in May, she said.

"He is moved to tears by our loving care for him and has resumed saying prayers and the rosary," the social worker said cheerfully.

While visiting her fellow sister, she was deeply touched by patients and their relatives who had no money to buy food and medicine, as well as the sight of two patients sharing a bed in a crowded hospital. Many had no one to tend them, and others secretly left the hospital without paying their medical costs.

In early August, Daughter of Our Lady of the Visitation Sr. Mary Le Thi Bich and two others sisters visited and offered milk and money to Le Huu Tong, a Buddhist kidney patient from Binh Dinh province who has received hospital treatment since early this year.

Tong said his wife and two children, who cannot afford to visit him in Hue, work in farms and send money to him for treatment costs.

"I treat the nuns like my relatives as they visit me weekly and bring me joy," the 43-year-old said, adding that he also asked the nuns to pray for him to be in peace and overcome his illness. "In the past, I felt extremely sorry for myself every time I saw other patients had their visitors." 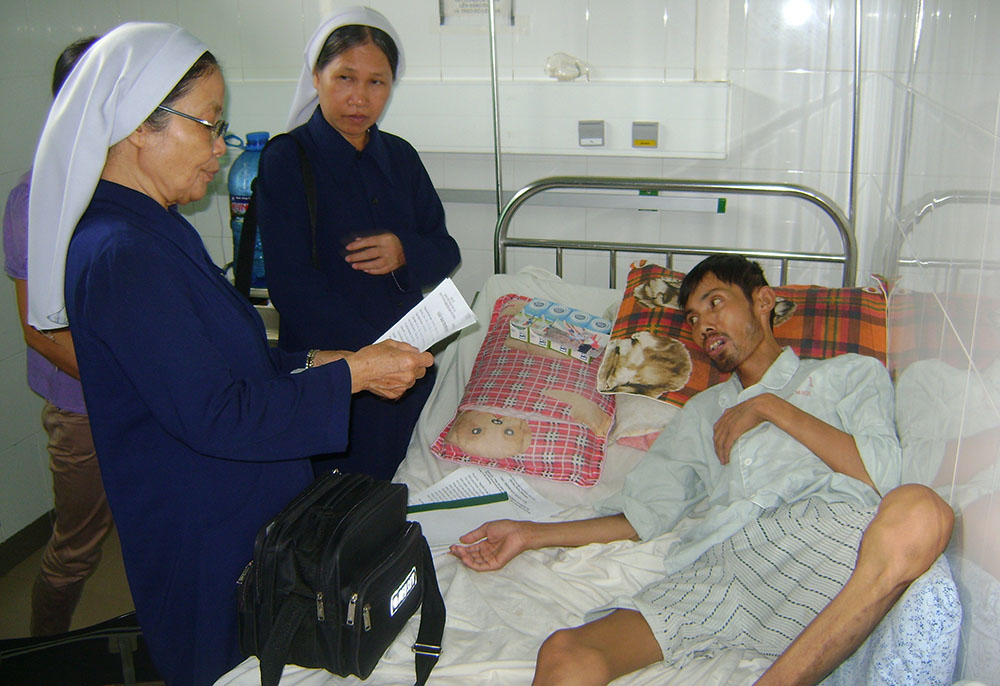 Bich, who is in charge of the congregation's charitable activities, said they have intimate conversations with patients and encourage them to seek spiritual support.

"We feel their pain and suffering and try to do something to make them feel comforted," the social worker said. The nuns provide child and adult patients with milk, clothes, cakes, and money from the congregation's reduced expenses on Fridays (forgoing certain foods and needs), as well as donations from benefactors.

Daughter of Our Lady of the Visitation Sr. Lucia Nguyen Thi Hong said many kidney patients — most of whom live in poverty and work manual jobs — fall into depression, fear and anxiety about their illness, asking nuns to pray for them and their families and sometimes even guide their conversion to Catholicism.

Hong, 31, said that some 100 people embraced Catholicism last year through their ministry. 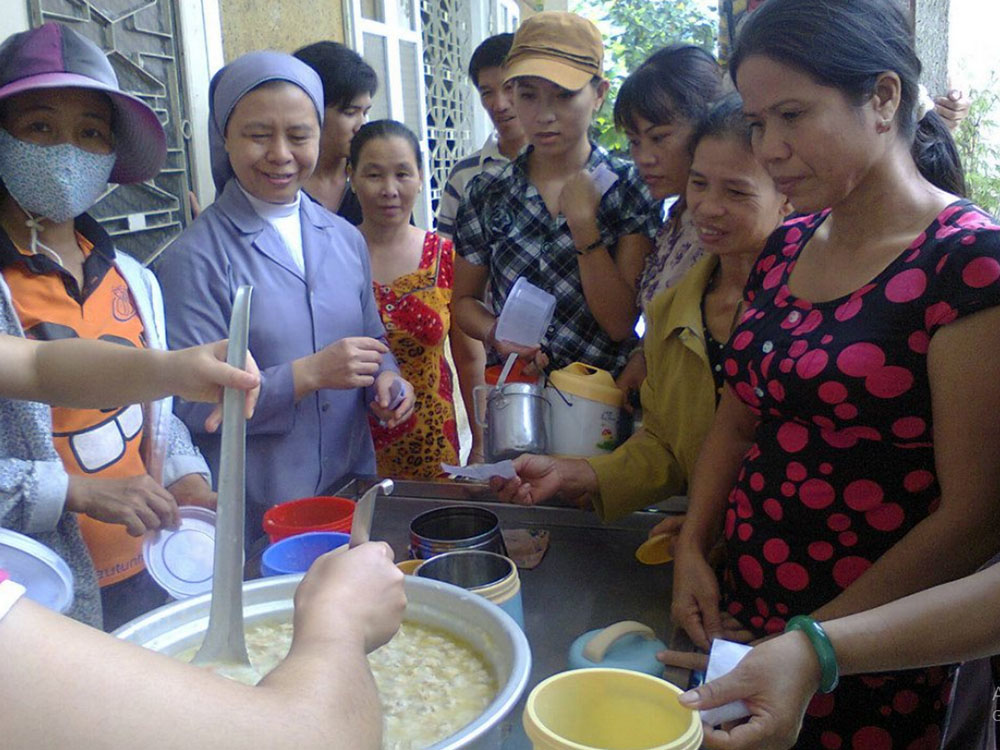 Other patients are also given material support from the nuns, such as Mary Nguyen Thi Thanh Ha, a 40-year-old mother of two. She said the sisters offered her 20 million dong to cover medical fees for her colon tumor resection in 2019.

"I owe the nuns a great debt of thanks for their support and encouragement while I was in the hospital and no one lent me money," said Ha, a housecleaner, adding that she joined the church last year.

Cecilia Nguyen Thi Thu Thanh, a patient with late-stage kidney failure, said she converted from Buddhism to Catholicism in June after the nuns started to visit weekly and partially paid her monthly rent and treatment last December.

The single woman said in the past she was dreadfully worried about herself after three of her friends died of kidney failure. 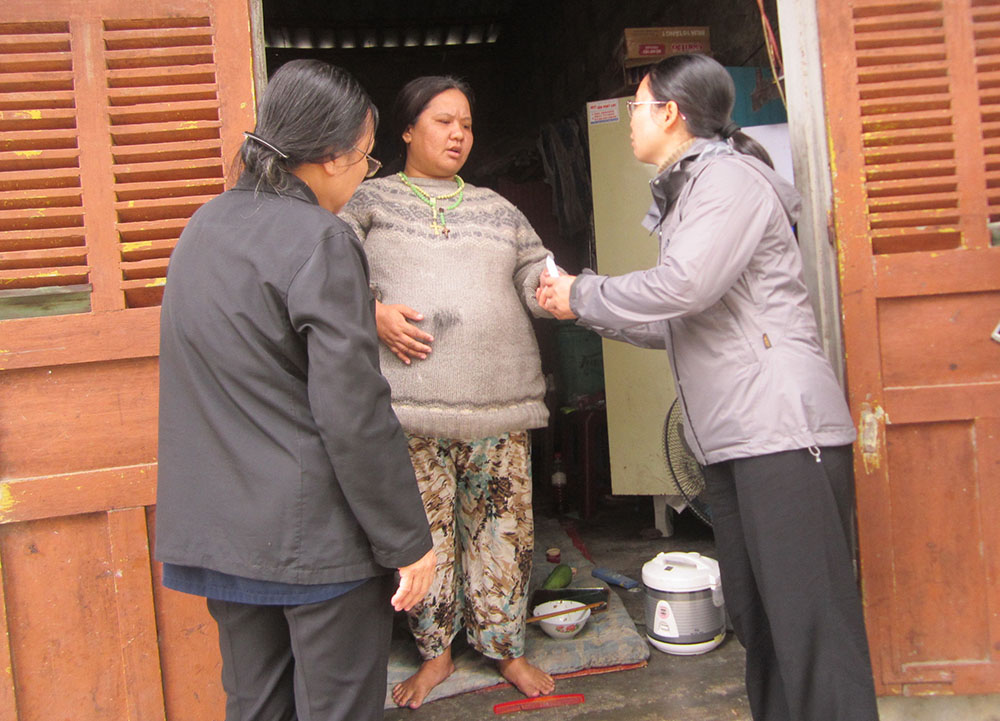 "Now I feel God's peace and no longer fear ghosts and death; the nuns bring me back to new life," she said.

Nhung, 70, said most patients are from other provinces who live in tiny low-rent rooms and suffer from lack of nutritious food; they have to buy food from nearby restaurants that's three times more expensive than what the nuns spend.

Martha Pham Thi Hong, who is experiencing renal failure, said her husband and she have been living on food from the nuns since February. They had their flat in Ho Chi Minh City and got 100 million dong for her treatment.

"We do not know how to live here without relief aid from the nuns and other Catholics," said the 44-year-old woman, who stays at her relative's house in Hue. Some Catholic groups from local parishes regularly provide her and other patients with food and money.

"We keep our faith alive thanks to their generous donations."