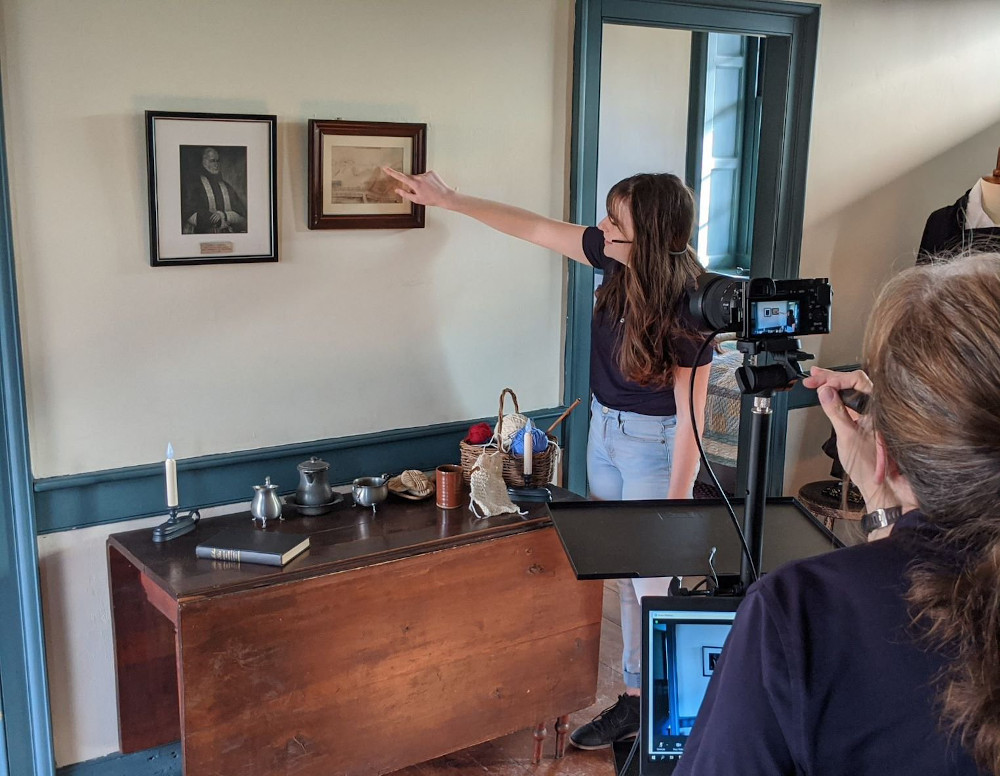 They say when one door closes, another door opens.

When the National Shrine of St. Elizabeth Ann Seton in Emmitsburg closed its historical buildings to public tours last year due to the pandemic, its team opened a window, a Zoom window.

Rather than bringing people to the shrine, they decided to bring the shrine to the people. The solution: virtual tours of the basilica and the historical buildings at the shrine.

Launched on Mother Seton's feast day, Jan. 4, the shrine's live virtual tours have been a streaming success — so much so that shrine officials intend to make the virtual tours a permanent option for those who want to learn about America's first native-born saint.

Over 3,000 people from 21 states have taken a virtual tour of the shrine, and the tours continue to attract school groups and others from as far away as Alaska and Oregon.

Virtual or in-person tours can be booked at www.setonshrine.org/virtual-tours.

While the shrine is currently open to in-person visitors again, the virtual tours have become an important way of showing how Mother Seton's experiences as a wife, mother, convert, servant of the poor and teacher make her relatable to people today, shrine officials said.

The shrine is in the middle of a yearlong commemoration of the 200th anniversary of her death, Jan. 4, 1841.

"Technology has been one of the silver-linings to come from the pandemic," said Bridgett Bassler, the shrine's education programs manager. "We realized we had the capability at our fingertips to connect with people from every corner of the country."

"With virtual tours," she said, "we have the ability to provide access to St. Elizabeth Ann Seton's life and legacy to those who may never be able to experience an in-person visit to the shrine."

The tours use Zoom to showcase the shrine and introduce it to new visitors. Virtual visitors can choose to explore the shrine and Elizabeth Ann Seton's journey through four different live tour options, including the Historic St. Joseph's House, the Stone Farmhouse, the Basilica of St. Elizabeth Ann Seton, and the history of the Sisters of Charity who ministered during the Civil War.

Schools have been the main adopter of the shrine's virtual tours program. Over 37 schools have taken tours, including 12 that are named after Mother Seton. The group that has virtually traveled the farthest to visit is the St. Elizabeth Ann Seton School in Anchorage, Alaska, which is 4,236 miles away from Emmitsburg.

"In closing the physical doors of the shrine, we've actually opened its reach to a wider audience," said Claire Bodine, the shrine's coordinator of group visits. "We've been able to connect with schools across the nation, working with students from kindergarten through college. It's truly been a blessing to share St. Elizabeth Ann Seton's story in this innovative way."

"We have always celebrated Mother Seton's feast day, and when I saw the opportunity to visit her national shrine virtually on that day, I thought it was a great opportunity for my students to see something 'in-person' that they've learned about in class," McLaughlin said.

She recalled her students' excitement over learning that even saints live through cold weather conditions like they do in Alaska. They also resonated with Elizabeth Ann Seton's small-town lifestyle.

"Our class enjoyed getting to see all the aspects of St. Elizabeth Ann Seton's life," she said. "Through the tour we learned much more about her impact in education and religion. The students were so engaged with the tour that they didn't even mind missing their recess to accommodate the tour due to time zone differences!"

The interest in visiting the National Shrine of St. Elizabeth Ann Seton extends beyond U.S. borders. In May, the shrine had its first international virtual tour for a group from Ontario.

"We even had a group from Australia try to book a virtual tour," Bodine said. "While that tour hasn't panned out yet due to time zone differences, to me it emphasizes Mother Seton's relatability. Her work, her devotion and her experience resonate with people around the world."

Even though COVID-19 restrictions are lessening and the shrine is open to the public now, interested tourists will still be able to visit the shrine from virtually anywhere.

In the coming months, Bassler and Bodine hope to expand the virtual tours to include more offerings including living history programs, where visitors can explore Mother Seton's world through interpreters portraying real people Mother Seton knew, lived and worked with.

Other activities and events included in the commemoration of Mother Seton's death are a new exhibit of artifacts from Mother Seton's life that were recently donated by the Sisters of Charity of New York, one of the orders that traces its lineage back to Mother Seton, and plans to expand the shrine's Seeds of Hope retreat program for underserved populations later this year.