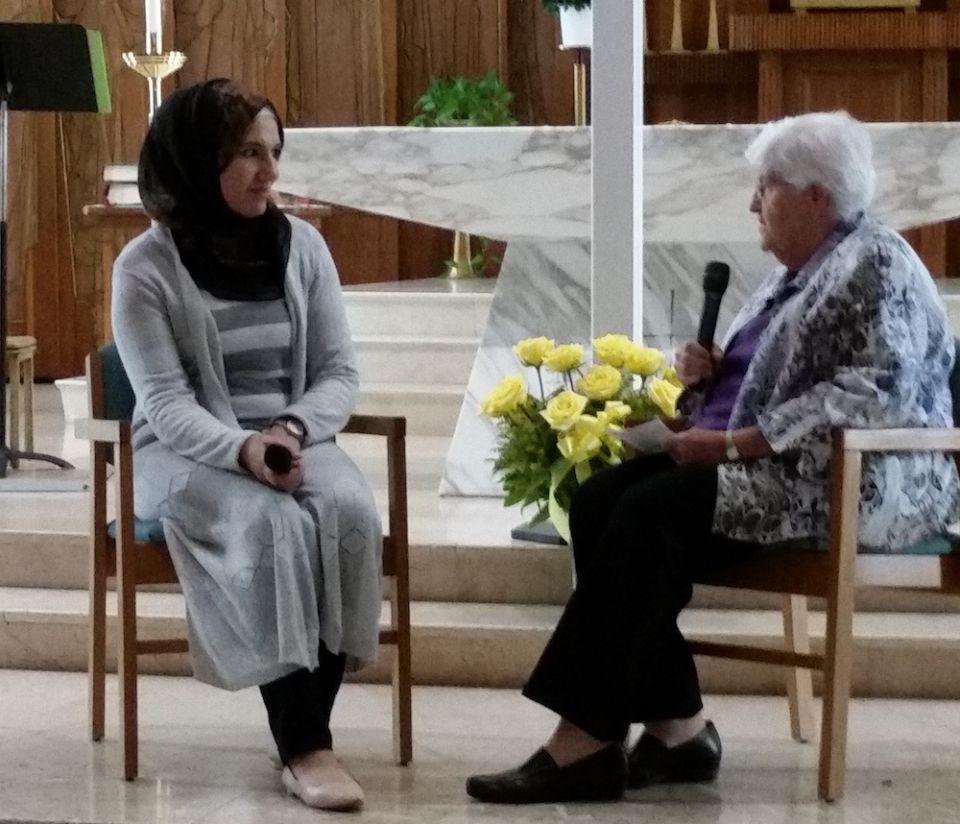 Manal, left, a Syrian who was resettled to the United States in 2016 from a refugee camp in Jordan, speaks with Sr. Mary Leonora on International Day of Peace 2017 at the Villa Notre Dame chapel in Wilton, Connecticut. (Courtesy of the School Sisters of Notre Dame)

Editor's note: In the summer of 2018, Global Sisters Report concentrated on the millions of displaced people "Seeking Refuge" in the world. A list of the stories, including about Syrians in Jordan, is here on our Seeking Refuge feature series page.

Imagination is a wonderful gift that, as children, we use fairly often. Then, as we grow up, many of us put that gift aside. However, on June 20 of this year, every person around the globe is receiving an invitation from the United Nations to rectify that neglect by responding to the call of the 2020 World Refugee Day, a call which is — in part — for us to imagine the reality that is faced by every refugee.

Imagining is not an easy task. I myself was not able to accomplish it until I spent two years ministering to those living at the Buduburam refugee camp in Ghana, West Africa. All of us were there because of the outbreak of civil war in Liberia. For me, the camp turned out to be a new and surprising world.

As I drove through the security gate for the first time in 1992, I entered what can only be described as a village of silence. The jovial, warm, welcoming Liberians that I knew and loved were now sad and fearful. They had been betrayed by people they trusted. They had witnessed terrible atrocities or been forced to carry out horrific acts, often at gunpoint. They had been separated from family and friends, possessed nothing but the clothes they had on, and were sheltering in make-shift tents. Unaccompanied children, many now orphans, wandered aimlessly in search of a familiar face, a hug. Can you really imagine living like that?

A more recent experience greatly strengthened my ability to imagine the life of a refugee. In March of 2016, I was privileged to join the welcoming committee in Wilton, Connecticut, that had gathered to greet Manal, a 32-year-old Syrian widow, and her five young children.

In 2014, Manal had fled from war-torn Syria with her 5-month-old baby in her arms, her 3-year-old strapped to her back, and her 8-, 9-, and 10-year-old children walking closely behind her. On her head were all the possessions that she could carry. The family's destination was the refugee camp in Jordan.

Just how perilous that journey was became clear to me once Manal had settled here, in a house provided by the School Sisters of Notre Dame, and I became one of her English teachers. I learned, for example, that during those 13 days spent walking on mud-soaked roads, the family slept on the ground, ate whatever food they could find, huddled together to protect one another from the cold and rain, and prayed that a bomb would not fall from the planes flying over their heads.

After arriving in Jordon, they spent two years in "safety," despite continuing to endure many hardships. Finally, the day came to begin the process of resettlement. Days and months of filling out forms, hours of interviews, and a strict vetting process ended with the good news that the family had been chosen for resettlement in the United States. Manal's dream of a better life for her children was about to be realized. Does the story of her journey help you to imagine the suffering of those who are on a similar journey at this very moment?

But there is a happy ending: Manal and her five children are still living in a home provided by the School Sisters of Notre Dame; we see her every day because she is now employed by the congregation as a member of the kitchen staff. Manal's English and vocabulary are amazing. The children are doing well in school. The oldest boy, Mohammed, just began a summer job. They are a happy, healthy, delightful family

Today's world is not lacking in images of people's pain. Our families and friends, our neighbors and colleagues, and certainly the media have been giving us at least some idea of what it is like to suffer from both COVID-19 and systemic racism. Both must remain at the center of our focus. The question being posed today is whether we are willing to add to our focus the thousands who are fleeing their homes every day, taking flight from conflict, hunger, human rights abuse and natural disasters. Are you willing to act on behalf of the men, women and children who now constitute the largest number of refugees in recorded history?

On June 20, we will honor the courage and endurance of those refugees who are still en route, and celebrate the perseverance and contributions of those who have arrived. Finally, as night falls on the 2020 World Day of Refugees, each of us is asked to respond Yes or No to the invitation offered this day, the invitation to imagine. Can you imagine a world that offers generous and respectful welcome to refugees? Can you imagine yourself being one among many to offer them welcome?

[Sr. Mary Leonora Tucker is a School Sister of Notre Dame. After a ministry as an elementary school teacher and administrator in Massachusetts and Connecticut, she served in Liberia and Ghana for 27 years, first for two years in a refugee camp in Ghana. Later after serving as assistant headmistress at Notre Dame Girls Secondary School, she returned to Liberia to work on a project with an non-governmental organization until its completion in 2011. Presently she lives in the congregation's residence in Wilton, Connecticut.]

Read this next: Seeking Refuge: Jordan takes in masses of Syrians but prefers they don't stay
Related: Threat multiplier: The impacts of climate change on refugees