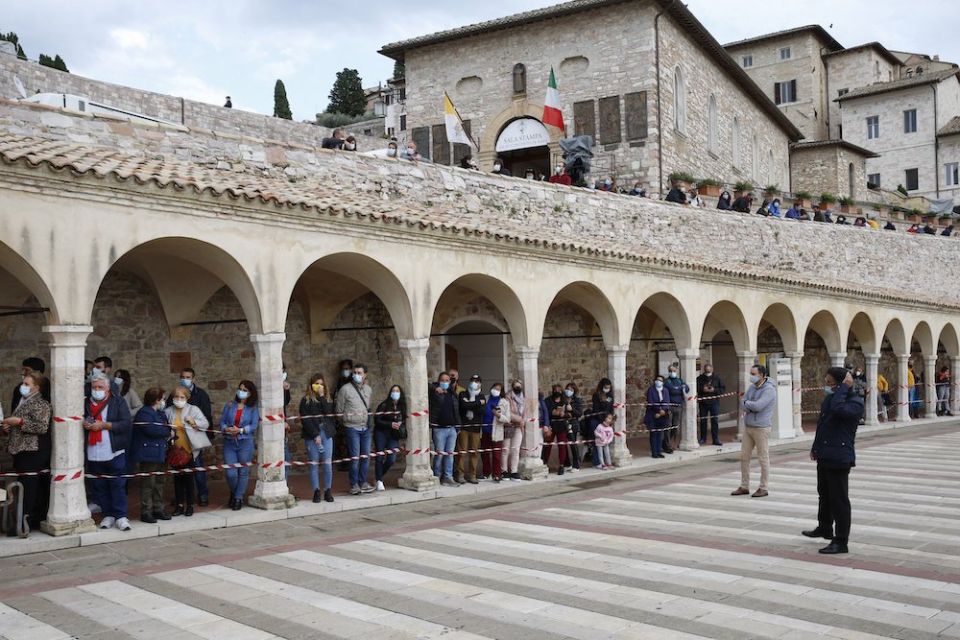 People wait to see Pope Francis outside the Basilica of St. Francis in Assisi, Italy, Oct. 3. The pope celebrated Mass and signed his new encyclical, " 'Fratelli Tutti,' on Fraternity and Social Friendship," in the crypt of the basilica. (CNS/Paul Haring)

Pope Francis' new encyclical, Fratelli Tutti, is earning praise from the leadership of the International Union of Superiors General (UISG), who say the letter is a confirmation of the types of bridge-build ministries that sisters engage in throughout the world.

"We received a gift from this encyclical," Claretian Missionary Sr. Jolanda Kafka, UISG's president, said during an Oct. 5 webinar that attracted dozens of congregational leaders from throughout the world.

The pope's call to "break down walls," said Ireland Loreto Sr. Patricia Murray, UISG's executive secretary, resonates with sisters who in their daily ministries work with all types of communities and try to find common humanity between people.

It is up to sisters and others within the church, Murray said, to heed Francis' call to build bridges — "bridges of dialogue, bridges of encounter."

That is particularly needed in a world of growing economic and power imbalances, Murray said. Though the global climate crisis is making more people aware of humanity sharing a common metaphoric sea or ocean, "some are in yachts and some are barely clinging on."

In stressing the bonds connecting all of humanity, Murray said the pope is affirming many of the directions Catholic sisters are now taking in their ministries. In an August 2019 address to the Leadership Conference of Women Religious, Murray noted that "being truly present to one another, being open to a mutual encounter with the other who comes as a stranger, is a prophetic act in today's divisive contexts."

In envisioning a better world after the current global pandemic, the pope, among other things, wants to see a world with less populist rhetoric which becomes more focused on the common good.

One initial criticism of the encyclical is that it does fully integrate the experiences of women in its text. Writing Oct. 5 in NCR, Meghan Clark, an associate professor of theology and religious studies at St. John's University in New York, argued that while the pope's letter calls for "building a radically different social, civil and political global community," the voices of women "are largely absent."

"Despite a real emphasis on inclusive humanity within the text, no women are cited as inspiration, used for theological reflection or given as examples," she said.

That perspective was not addressed during the Oct. 5 webinar, with the UISG leadership unanimously praising the encyclical's tone, direction and emphasis. Murray acknowledged that it will take time to digest and reflect on new document, as it had only been released the day before.

Calling it a demanding text, Murray, said, "This encyclical really demands reading and reflecting [on] again and again," but that people will find in it a core based on seeing, judging and acting.

"We have to touch the suffering, we have to draw near, drawn into the vulnerability of the other," Murray said of one emphasis in the letter.

In her remarks, Kafka noted the centrality of the parable of the "Good Samaritan" in the pope's encyclical. By using that example, Francis is asking believers to look into a mirror and acknowledge the common experience of being vulnerable and wounded.

But at the same time, the pope sees common hope. "Every human being has the potential to be a good Samaritan," she said.

Marianist Sr. Franca Zonta, UISG vice president, said she believes that in the encyclical the pope is a "person who is sowing" and is not worried about "where the seeds fall," with the result that the encyclical will prove to "be fruitful."

In going "out into the world," Zonta said Francis is asking fellow humans to "look beyond our little gardens" and see the wider world — a world that includes migrants on the move. Saying she supports the pope's call for respect, decency and justice for migrants, Zonta said, "It's important to see migrants not as a threat, but as a gift."

USIG board member Sr. Roxanne Schares, a member of the School Sisters of Notre Dame, said she was struck by the letter's hope that the global pandemic's exposure of health care inequities could lead to greater attention to justice-related concerns and priorities. What Francis is seeking, Schares said, "is a journey of transformation."

Another UISG board member, Sr. Aurora Torres, a member of the Congregation of the Sisters of Marie Reparatrice, agreed, saying that the encyclical casts Francis as a prophet, who recognizes what is broken "and gives us a path of hope."

"This is a whole program," Torres said, "a project of life."

The release of the encyclical is also a moment for sisters to ask probing questions of ministry, Torres said. "How am I being a sister to others?" she asked. 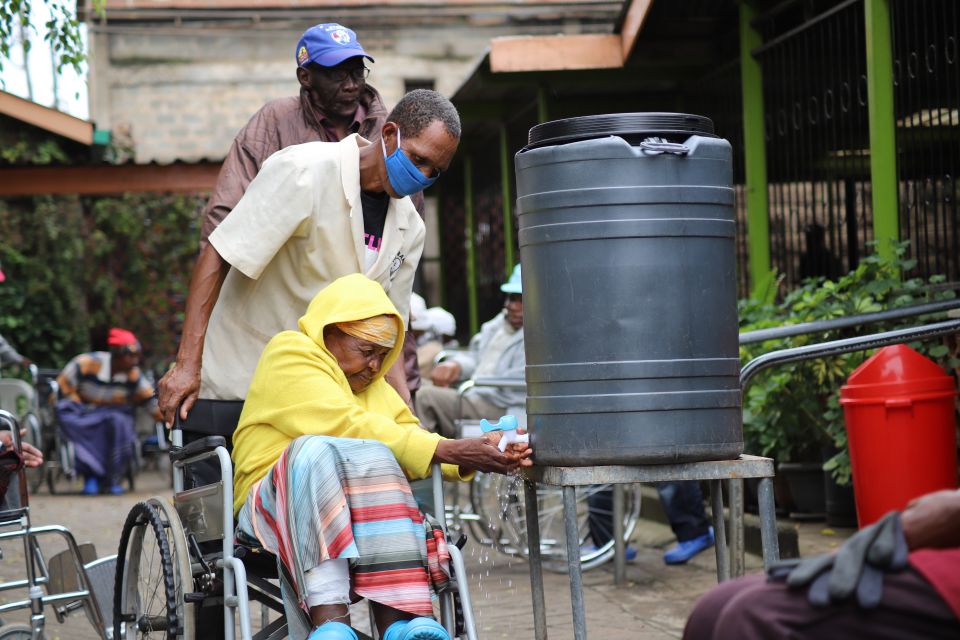 A staff member assists a resident at the Cheshire Home for the Elderly in the Kariobangi slum northeast of Nairobi, Kenya. The home is run by the Franciscan Missionary Sisters for Africa. (GSR photo/Doreen Ajiambo)

No room for compassion fatigue

A Place to Call Home: Convert the convent, invite families to stay