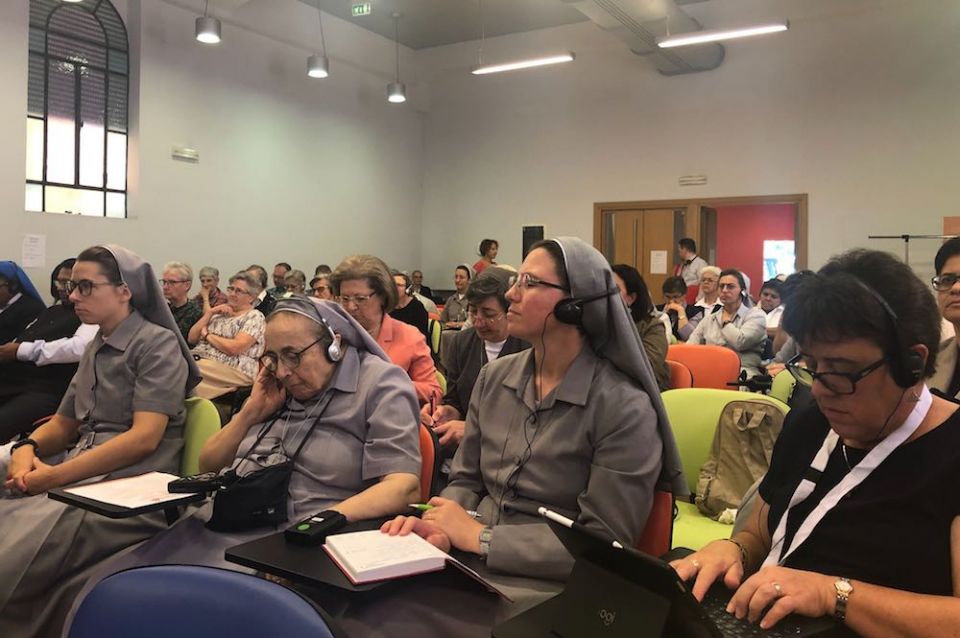 With 48 countries represented and three languages being spoken (English, Spanish and French) sisters rely on a translating service to participate in the Talitha Kum international gathering. (GSR photo/Soli Salgado)

Rome — The worldwide issue of human trafficking brought together 86 women religious serving as delegates from 48 countries, united in mission as well as in their little black headphones that translated between English, Spanish and French.

The first International General Assembly of Talitha Kum, a global network of networks, is a celebration of its 10 years fighting trafficking around the world.

The International Union of Superiors General (UISG) is hosting the Sept. 21-27 gathering in Rome. Those representing their countries' anti-trafficking networks will participate in evaluations, presentations, reflections and roundtable discussions to discern what their future commitments against trafficking will entail while strengthening the collaborative links between networks.

More than 2,000 women religious are members of Talitha Kum, with 43 national networks doing work in 77 countries.

"Our network is much more than a space of coordination. We are a group in which we support each other and nurture," said Comboni Missionary Sr. Gabriella Bottani, Talitha Kum's international coordinator, in her opening remarks Sept. 21. She noted that the network accompanied 15,500 trafficked persons in 2018.

And while this gathering serves as a touchpoint for the many networks around the globe, as well as an opportunity to reassess priorities and organize for the future, it is largely a celebration of the work accomplished in the previous 10 years.

"This is a week that mixes everything, the organizing and the celebrating — celebrating the victories of the many people we have been able to help," said Sr. Ilse Cedeño, a Sister of the Divine Will from Colombia.

"It's an opportunity to weave bridges of solidarity and unite our forces, sharing our experiences and our wisdom while learning what our fellow religious are doing throughout the world that might work for me in my country and my network," she said. "We all have our challenges, but we are here to strengthen one another.”

Exacerbating the issue today is the link between migration and trafficking, as displaced persons and migrants are easy targets for traffickers. Whether out of Venezuela or Sudan, refugees and migrants on the move have required sisters from bordering countries to increase their network's efforts and collaborate across borders.

When Congregation of Jesus Sr. Adina Balan first got involved in anti-trafficking work 10 years ago in Romania — where the majority of trafficking happens to its people when they go abroad, she said — poverty was the chief driver of migration.

"Now, it's more for ideological reasons," she told GSR. "People don't identify so much with the politics anymore ... and they prefer to go to countries where democracy is stable."

Mihaela was 19 when she finished high school in Romania and decided to move to Germany to work for a few months while she studied political science. She'd work for and live with a "serious family — at least that's what my friend Amalia called them," Mihaela said in a written testimony for Talitha Kum.

"When I arrived at that house, I noticed almost immediately that something was wrong: There were no toys, yet Amalia had said that the family had three children. As soon as she left, three men entered the house, beat me, assaulted me, and then took me to a brothel where I was forced into prostitution every day, from 7 P.M. to 5 A.M. Sometimes I had as many as 15 customers a day."

According to a report by the United Nations Office on Drugs and Crimes, almost 80% of trafficking is sexual exploitation. (Children are about 20% of victims worldwide, though they constitute a large majority in certain parts of the world.)

Today, seven years later, Mihaela's traffickers are in prison, and Mihaela said she has to thank the sisters of Talitha Kum, as well as other nongovernmental organizations, for taking care of her. And while her "wounds are not completely healed, today I have a new life," she said. She is in law school to help other girls escape trafficking and bring justice to their traffickers.

Like in Mihaela's case, anti-trafficking efforts often involve a number of entities approaching the issue from various angles. Balan said sisters in Romania (as with other countries) work with police to identify victims and prosecutors to handle the legal aspects, while other nongovernmental organizations provide health services, accommodations and psychological counseling. Sisters, meanwhile, handle direct services, such as accompaniment of survivors.

"I can't say that one is bigger than the other because we all depend on each other for the work that we do," she said. 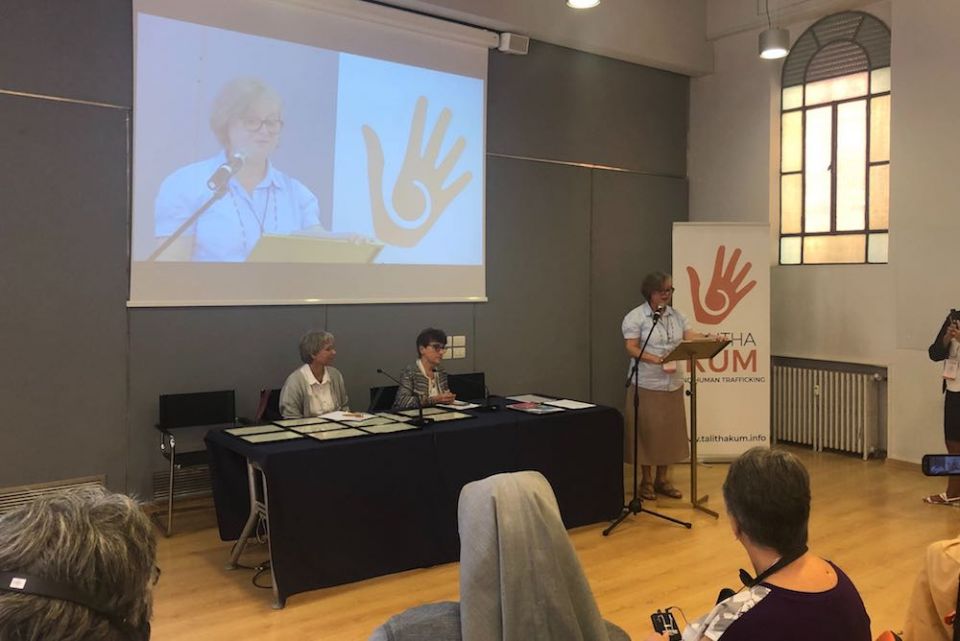 French Sr. Marie Héléne Halligon of Our Lady of Charity of the Good Shepherd said her advocacy work in Europe largely relates to lobbying with 25 partner associations who share the mission. Halligon represents RENATE (Europe Networking Against Trafficking and Exploitation, the European faction of Talitha Kum) on the European Council. Currently, they are lobbying the European Union to prioritize renewing its plan of action against trafficking.

"Right now, we are working with the group of experts that looks at each [European] state regarding trafficking: They go to every state and ask the government questions, but we, along with the NGOs, tell them about our experience on the ground, and [how it possibly contradicts] what the government reports," she said, noting that the experts' final reports reflects all angles.

"It's the voice on the ground that we bring."

Talitha Kum sisters to meet with Pope Francis this week

On Sept. 26, the Talitha Kum sisters will have a private audience with Pope Francis, who has said that "the work of raising awareness must begin at home, with ourselves, because only in this way will we be able to then make our communities aware, motivating them to commit themselves so that no human being may ever again be a victim of trafficking."

Such is the nature of Talitha Kum's work: international connections with a focus on the local, providing resources to its networks on the ground but with organizing efforts on a macro level.

"It was probably one of the most exciting moments, when Pope Francis was elected and immediately spoke about his absolute commitment to the work against human trafficking and this mission," said Sr. Imelda Poole of the Institute of the Blessed Virgin Mary (Loreto Sisters), who has been doing anti-trafficking work in Albania for 14 years.

The conversation at lunch between two sisters on the gathering's opening day demonstrated the surprising extent to which seemingly unrelated countries might overlap — in this case, New Zealand and Colombia.

Marist Sr. Gemma Wilson came from New Zealand, a wealthy country where prostitution is legal but where Pacific Island migrants are exploited for their labor. During the lunch recess, she spoke with Cedeño from Colombia, whose country is absorbing vulnerable Venezuelan migrants while also dealing with an ongoing armed conflict between the government and guerrillas, as well as a general lack of access to education or work — all of which are contributing factors to trafficking.

Though separated by an ocean, economic realities and a language, the Kiwi and Colombian sisters were eager to learn from one another.

In New Zealand, Wilson said, recent investigations by the Immigration Department have discovered that 5% of women in brothels have had their passports taken away, and childhood prostitution among those who have run away from home, tempted by the money that gangs offer them, is also a problem. Still, cheap labor is the main issue, and the same department is increasing its efforts to investigate companies.

"It's a good country we live in, but even so, this is going on," she said.

"For me, this week is a way of strengthening our bonds, connecting between countries like New Zealand with other countries that have these open problems," Wilson said. "Meeting people like Ilse or others from Africa and Asia and getting to know what's going on in countries much less well off than we are ... I believe very much in the force of women when they get together."