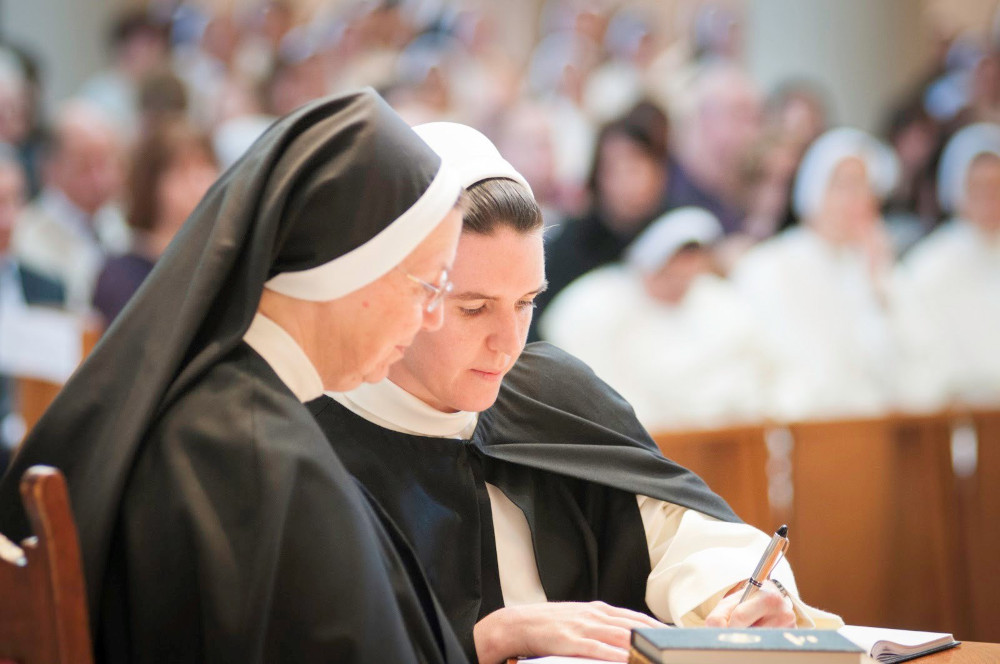 Dominican Sr. Ann Dominic Mahowald is seen July 28, 2012, the day she made her first profession of vows. After graduating from The Catholic University of America in Washingtonm she was able to pay off her student loans through the generosity of friends, family and strangers, and enter the Dominican Sisters of St. Cecilia Congregation in Nashville, Tenn. (CNS/Courtesy Sr. Ann Dominic Mahowald via Catholic Herald)

As a teenager, Dominican Sr. Ann Dominic Mahowald was excited to attend a Catholic university.

She knew that enrolling at The Catholic University of America in Washington would be expensive, but she saw her education as an investment, one she had 30 years to pay for gradually.

At college, she made good friends and grew deeper in her faith. After earning her degree, she began teaching at St. John Paul the Great Catholic High School in Potomac Shores, Virginia.

Then the future Dominican sister realized she was being called to enter religious life. But there was one thing in the way: $100,000 of education debt.

Thomas Conroy is facing a similar obstacle to religious life.

Growing up he was an altar server at St. James Church in Falls Church, Virginia, and later attended Bishop O'Connell High School in Arlington. But it wasn't until he was studying at Mount St. Mary's University in Emmitsburg, Maryland, that he began to seriously consider his vocation.

"A good group of friends taught me that God was more than something I did on Sundays," Conroy said. "He was really somebody who I could fall in love with and who could love me."

After a period of discernment, Conroy applied and was accepted to the Dominican order. But his student loans are stopping him from beginning formation.

"For the Dominicans, and I imagine a lot of religious orders, student debt is not something they're able to subsume," Conroy said. "They're not exactly flush with cash."

Student loans are preventing many young adults from entering religious life. One in three people who inquire about religious life has an average student loan debt of $28,000, according to the National Religious Vocation Conference.

Many religious communities report that a significant percentage of those seriously inquiring about a vocation don't apply or ultimately don't finish their application because of outstanding debt.

"The amount can vary from person to person," Mahowald told the Arlington Catholic Herald, newspaper of the Diocese of Arlington. "But every young person I've talked to at some point asks the question, 'What did you do about loans?'"

Once Mahowald decided to enter the Dominican Sisters of St. Cecilia in Nashville, Tennessee, she knew she'd have to find a way to pay down the debt fast. So she moved in with her aunt and uncle.

She met with her principal, who offered her a coaching position to earn extra money.

"Every month, I took my paycheck and I paid my car bill and my phone bill. I took everything else and I paid off as much of my student loans as I could," she said. "I left not even $5 for an emergency in my bank account." 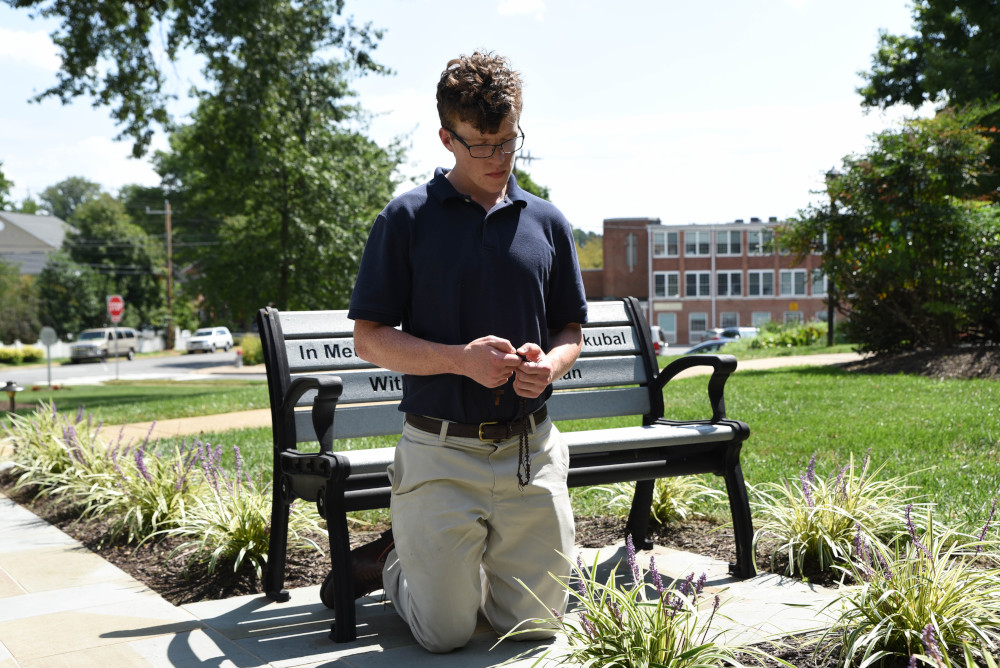 Thomas Conroy of Falls Church, Va., prays outside St. James Church Sept. 3, 2020. He is an aspirant with the Labouré Society. (CNS/Catholic Herald/Zoey Maraist)

Mahowald received financial help from friends, relatives and her parish pitched in. Her father's Knights of Columbus council held a pancake breakfast fundraiser.

As generous as the gifts were, Mahowald knew she still needed a major intervention. So, she reached out to the Mater Ecclesiae Fund for Vocations, a nonprofit that covers student loans for men and women as they discern a vocation.

Corey and Katherine Huber founded the fund. They became interested in helping women and men aspiring to religious life after a conversation with Fr. Edward C. Hathaway, then pastor at St. John the Beloved Church in McLean, Virginia.

He told the Hubers about a man who wanted to become a priest, but was within six months of the upper age limit for applying and still had about $40,000 in outstanding student loans. From that situation, Mater Ecclesiae was born.

"Basically, [Mater Ecclesiae] said my loans were too big for even them," Mahowald said with a laugh. "They could do a portion, but they couldn't do it all. It was a very stressful time, lots of tears. I felt irresponsible."

Then Mahowald received a call from a priest friend who said he knew someone who wanted to help. Over dinner, the benefactor offered to pay $40,000 toward the debt. Then Mahowald's grandmother sent her a $13,000 check in the mail.

Between donations from friends and family, her grandmother, the benefactor and Mater Ecclesiae, Mahowald was able to enter religious life 10 years ago. She is once again at St. John Paul the Great Catholic High School, this time as assistant principal of student life and discipline.

Conroy continues to pay off his loans with the help of the Labouré Society. The organization creates classes of aspirants, or those hoping to enter religious life, and teaches them how to raise funds.

"There are 21 of us who are fundraising collectively for all of our student debts," Conroy said. "For me, it means a lot because it's not just me on my lonesome. Knowing there are other people behind you and you're working together with them is a great consolation."

If all goes well, Conroy hopes to enter the Dominicans next summer. He believes the journey to pay down his debt is preparing him for religious life.

"The [fundraising] process helps with growing in self-abandonment, because you don't have control. You learn that [God's] in charge," he said. "It's an incredibly humbling and gratifying process to invite people into my vocation and to have the hope that one day I can wear that habit and be a priest of Jesus Christ."

Mahowald prays for those who financially supported her vocation. She fondly remembers an 8-year-old family friend who saved her allowance to give Mahowald $1.

"I took that dollar and I put it behind an icon of Our Lady of Perpetual Help. It was the last donation I made in my bank account before I closed it out to go to the convent," she said. "For me, that dollar represented the faith I needed to know God was in control."

Maraist is a staff writer at the Arlington Catholic Herald, newspaper of the Diocese of Arlington.