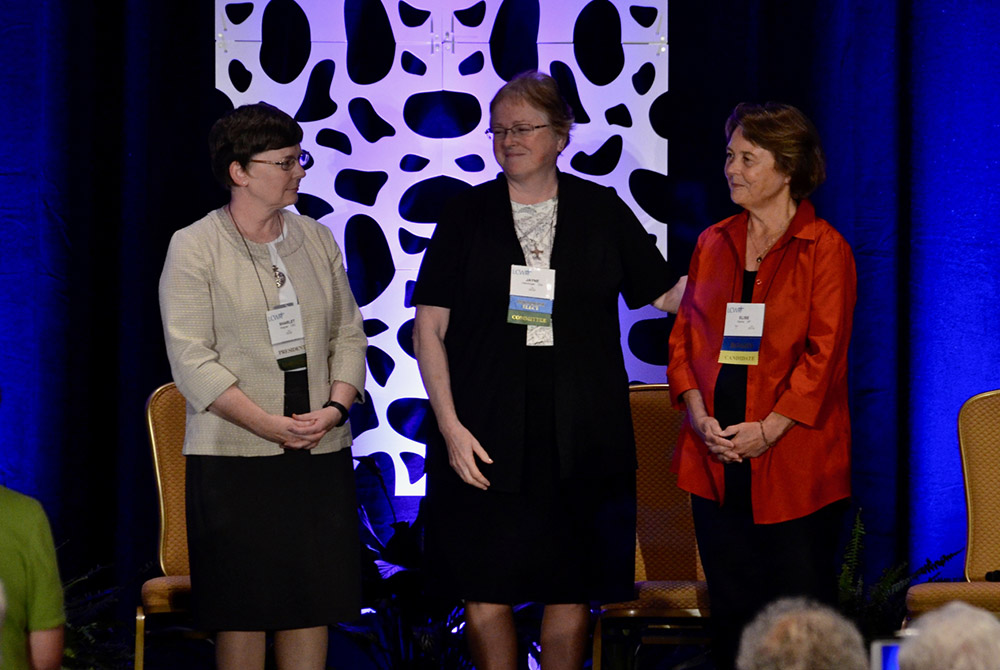 Meeting fellow sister leaders over coffee or lunch, perusing and networking with exhibition booths, sharing deep exchanges between speakers: The subtle yet substantial interactions that infused past annual assemblies of the Leadership Conference of Women Religious will be absent this year.

But rather than canceling the gathering that was to be in Dallas, Texas, LCWR decided to take the Aug. 12-14 assembly online, as the coronavirus pandemic discourages large, in-person gatherings.

That means the contemplative energy that used to fill the assembly ballroom and invigorate attendees will somehow have to be harnessed through videoconference, perhaps the biggest challenge to going virtual, LCWR leaders told Global Sisters Report. 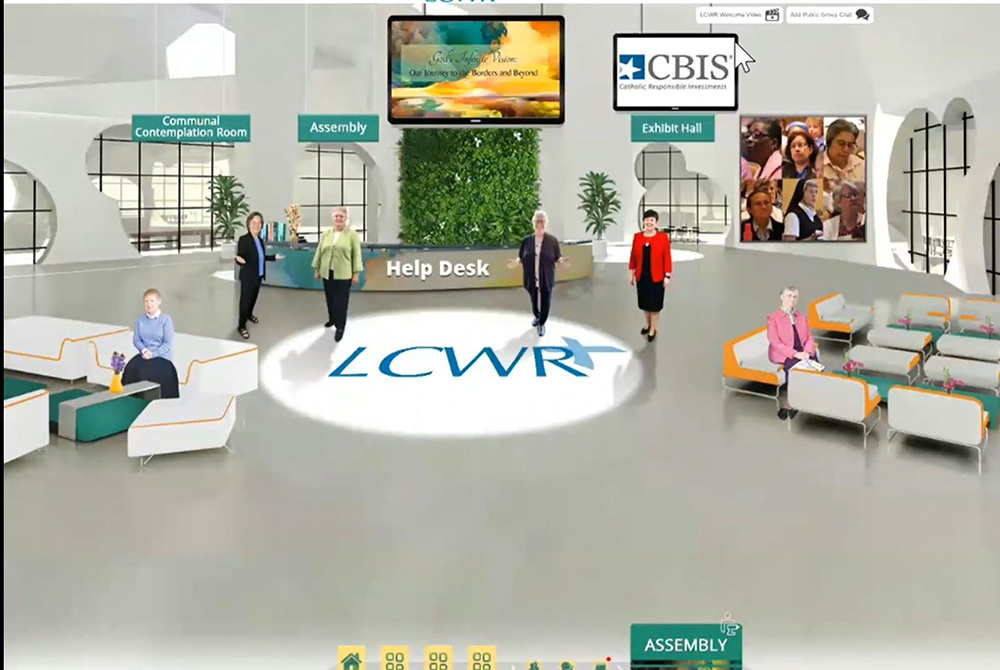 The virtual "lobby" for this year's annual assembly will still allow exhibitors to have a presence. (Photo courtesy of LCWR)

And while they also said they're always excited about upcoming assemblies and are grateful they didn't have to outright cancel, "there is something that happens in human relationships that really is singular" and foreign to virtual spaces, said Sr. Carol Zinn, a Sister of St. Joseph of Philadelphia and the conference's executive director.

"The very nature of LCWR is to gather its members," she said, adding that she's still eager to see how a common experience will emerge when the roughly 900 congregational leaders from U.S. congregations and guests attend from all over the world.

The crux of this year's assembly, sisters told GSR, is to discern the modern role of women religious in the United States.

Related: Sr. Patricia Chappell has long been a leader. Now she's being honored for it

While that subject has long been on the minds of religious congregations, particularly in the context of aging, today's crises — a global pandemic, economic downfall, political discord and racial injustice — are urgent calls for a creative transformation of religious life and its ministries, sisters said.

The question isn't if those issues will seep into the gathering, but how religious life will "seep out," Zinn said.

"There's no way that we could gather and try to keep [these realities] out so that we just talk about religious life. It's an oxymoron; religious life doesn't exist for itself but exists for the life of the world."

Though the past few months of lockdown have allowed sisters to become more adept at virtual communication leading up to the assembly, the challenge for this year's online gathering is not simply finessing the kinks that can come with virtual events, but preserving the meditative, inspiring element sisters most anticipate when attending the assembly.

To streamline part of the virtual process, LCWR members have already voted on a new president-elect: Sr. Jane Herb of the Sisters, Servants of the Immaculate Heart of Mary in Monroe, Michigan, will join the triumvirate presidency at the end of the assembly. Herb's background is in education: She was a teacher, principal, regional director and superintendent of schools for the Diocese of Albany, New York, before she was first elected president of her congregation in 2012. 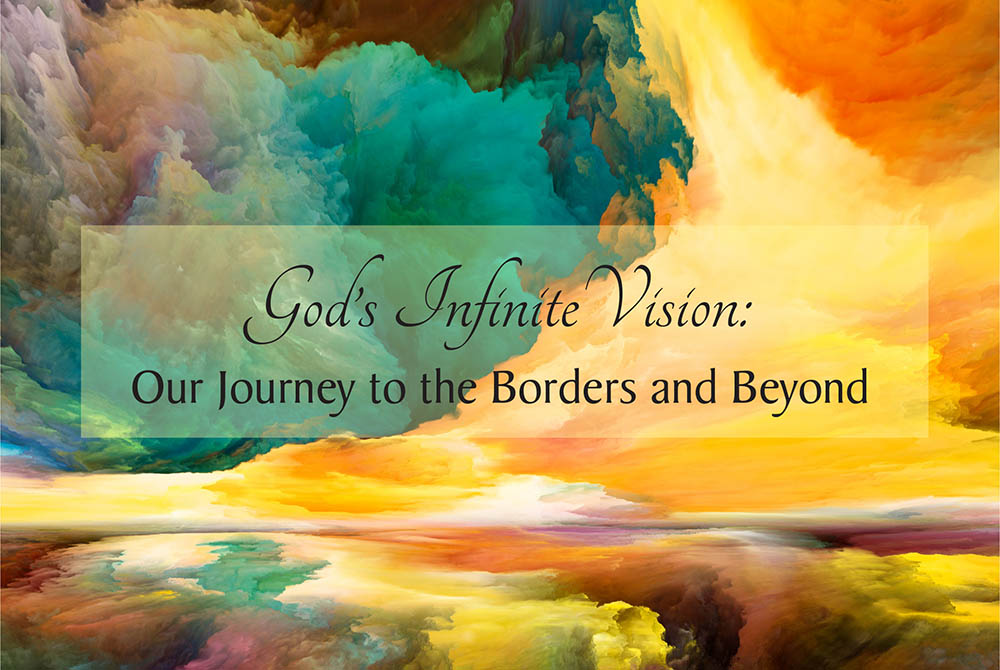 Sisters' role in the world

This year's theme, "God's Infinite Vision: Our Journey to the Borders and Beyond," comes from a desire to see beyond present difficulties and to embrace a more mystical vision that has hope for the future, said Sr. Annmarie Sanders of the Sisters, Servants of the Immaculate Heart of Mary, LCWR's associate director of communications.

That challenge is bigger than internal questions regarding the conference or congregations, said LCWR president Sr. Jayne Helmlinger, a Sister of St. Joseph of Orange, California. "It's about religious life as a whole" and how it ought to reshape and become "nimbler" in order to respond to the inequities and injustices in the world.

For Helmlinger, that doesn't necessarily mean that sisters start new, big ministries, but rather that they discern how they can apply their voices and their collective wisdom where it's needed in the world.

Helmlinger and Zinn both pointed to the history of emerging religious life, as congregations were founded amid chaos and the collapse of institutions, such as the French Revolution or the Spanish flu. 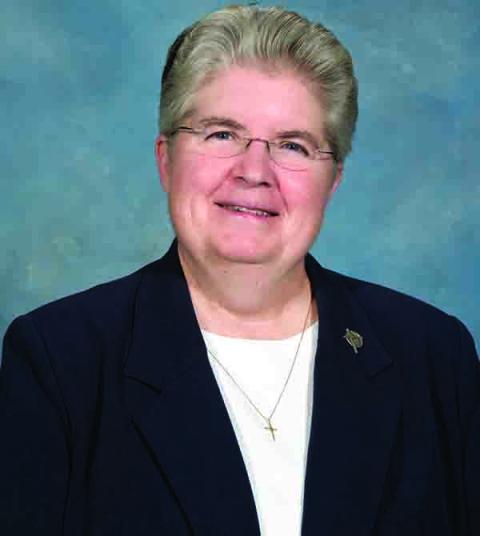 "It's in our DNA to be a presence, to speak the word of the Gospel, in times like these," Zinn said.

The work of the assembly is not merely to address society's massive issues, she added, but "to use it as a frame to then ask ourselves, in that context, what do we have to offer as sisters?"

One of LCWR's most important roles as a membership conference, Sanders said, is helping congregational leaders find meaning in what they do so they can then help their sisters "find hope and be bearers of hope in the world."

The pivotal piece of this assembly, Zinn said, is to generate opportunity for sisters to learn how they can make meaning out of what they face each day, whether it's making tough decisions regarding ministries or confronting the white supremacy embedded in a community.

Creating that experience in a virtual setting, however, will be an added challenge, she said, as the impact of feeling energized when one looks around the ballroom, singing and praying and sensing a deep communion with those in leadership ministry, will be missing.

For that reason, Helmlinger said she hopes participants feel compelled to treat the three days with the same reverence they would in person, setting aside distractions so they can reflect on all they hear or organizing virtual happy hours with other leaders.

"It takes a different energy to be online, and sisters are going to need that energy focused on LCWR and not diluted by outside activities," she said.

Helmlinger instead wants attendees to "have that internal space and terrain that's ready and willing to have seeds planted and have others that have already sprouted engage with each other, and create that garden of wisdom that is there when we all engage."

New ways of praying together

Sr. Colleen Settles, a member of the Sinsinawa Dominicans' leadership team, has been alone in her apartment for more than four months, occasionally socializing with fellow Dominican sisters in her apartment complex, always at a distance.

To ground her contemplative practice and stay in touch with other sisters, Settles uses the weekly prayer reflections LCWR has been providing its members since March. Each month deals with a new theme, such as transformative grief or vulnerable leadership.

LCWR also hosts dialogues on Zoom, a videoconference tool, where members and guests shared reflections every day in June and July. The purpose of the materials, Zinn said, is to serve as an "anchor," a space where sisters can hold their anxiety, grief and vulnerability.

Settles and her small group of sisters has been faithful in doing the calls twice a week. Through their communal prayer, she said, "we share the fruits of our contemplation, and that's been very enriching for people who might have been looking for a new way of praying together."

Divine Providence Sr. Ana Lydia Sonera Matos, a member of her community's leadership team, said the reflections have been "a thread that is taking us together to that assembly" and a "prophetic way" for LCWR to respond to the needs of congregational leaders in real time. (She added that she is especially grateful LCWR also offers the materials in Spanish, her first language.)

Participating in the prayers has been one way for everyone to head into the assembly "with one heart, where we can feel that vulnerability of all the world together at the same time," Sonera Matos said.

Because sisters are now more practiced in technology, Settles said she's hopeful the assembly will still be rich with in-depth, hard conversations about the future despite being online.

This virtual assembly should serve as a reminder of what can be done when out of ordinary time, she said. 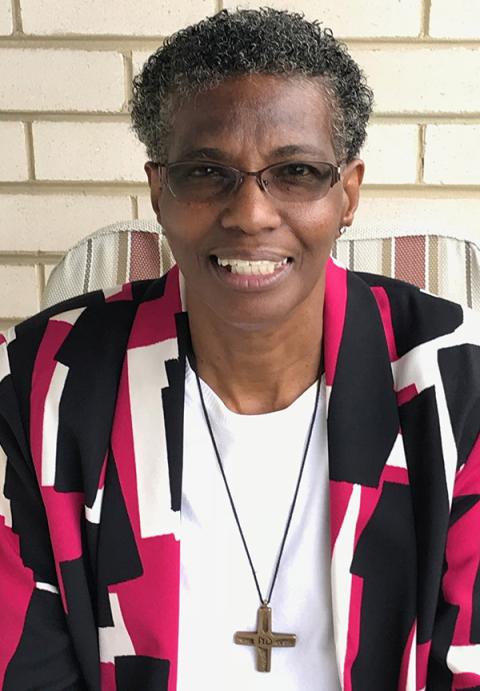 'We are being called right now'

Although awards will be presented in person at next year's assembly, the conference announced that the 2020 recipient of the Outstanding Leadership Award is Sr. Patricia Chappell, a Notre Dame de Namur sister who was the executive director of Pax Christi USA for eight years and who has spent years spearheading anti-racism workshops for religious congregations.

LCWR will also honor three recipients of the 2020 Lifetime Achievement Award next year: St. Joseph Sr. Helen Prejean, Immaculate Heart of Mary Sr. Amata Miller, and Sr. Joyce Meyer of the Sisters of the Presentation of the Blessed Virgin Mary, who is also GSR's international liaison.

LCWR leaders who spoke with GSR all emphasized the fact that the annual assemblies don't stand alone, but that each year is a continued attempt to follow "the thread of the Spirit," as Zinn said.

Last year's journey invited them to view religious life as a global sisterhood: to learn from younger sisters already versed at living across charisms and congregations and cultures and to pay attention to God's infinite borders, "even if it's the borders of our mindset," Zinn said.

The 2020 assembly's final session is "A Call to Women Religious," where three young individuals who are not sisters will share their hopes for the future and the roles they think women religious can play in climate change, racism and forced migration, the three issues at the heart of LCWR's 2019-2022 resolution.

"That's always the question for women religious. We're always trying to respond to what the world needs of us," Sanders said. Asking younger people felt like an opportunity because "this is their world that we're trying to help become a better place."

Zinn said she's most hopeful that, even without the open mic time, sisters will still be able to hone in on a collective sense that "we are being called right now like we probably have not been called in the last 50 or 60 years — to have this vocation be a presence in this country, in the world, that is needed in ways that perhaps has not been needed since before Vatican II or the civil rights movement."

"My eagerness is around the expectation that I will have an experience that calls me to find the answer to what am I called to do, and that together we will have some semblance of what we're called to do as a group of leaders."

This story appears in the LCWR 2020 feature series. View the full series.