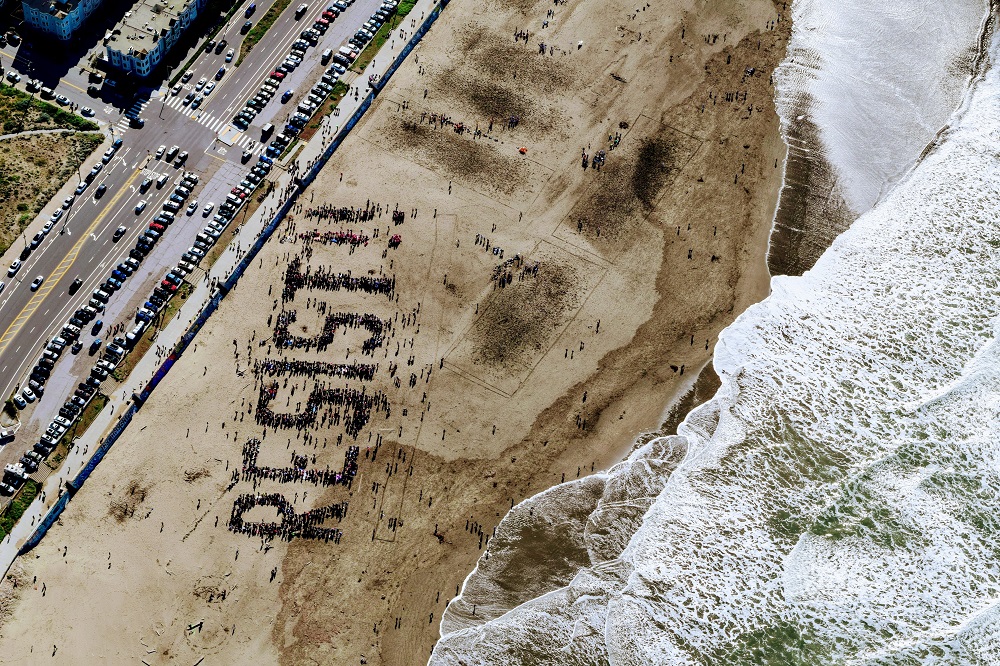 Anti-Trump protesters on Ocean Beach in San Francisco on Feb. 11, 2017 (Photo by Tim Gouw on Unsplash)

I'm feeling deep angst in my gut as I write this.

I'm thinking back to Feb. 5, when President Donald Trump was acquitted of two impeachment charges. After watching the proceedings, hearing the evidence and seeing the integrity of many who risked all to share their experience with the president, I recognize the cost of truth-telling in our nation.

How do I respond as a responsible citizen?

In pondering this question, I decided to attend a lecture at our public library that same day. Even though it was a snowy night in St. Louis and many events had been canceled, I was energized to see a packed auditorium as we listened to author Jennifer Chiaverini share her new book, Resistance Women.

In it, she focused on the lives of four women who gave their lives to resist Hitler's Nazism, emphasizing how they used their gifts to bring down the Third Reich from within. Three are real people whose archival material was traced through libraries in the United States and Germany. The fourth is a composite of those characteristics Chiaverini found as she researched other women involved in resistance.

The leader of the group was Mildred Fish, a Wisconsin graduate student and beloved teacher whose love for American literature energized her. She met Arvid Harnack, a German economist also studying at the University of Wisconsin who became the love of her life. They married and moved to Germany, where she hoped to finish her doctorate and teach in a German university. She retained dual citizenship.

The stimulating culture of Berlin in the 1930s allowed them to create a vibrant community of friends and scholars across political and cultural differences. This group would become the nucleus of a resistance movement where members used their gifts of journalism, drama, music, economics, history and homemaking to influence their neighbors as Hitler's rise to power moved toward monolithic thinking.

When Hitler found out about the group, he was livid. He could easily blame communists, gypsies, common laborers or similar groups for being against National Socialism, since they were not "smart enough" to recognize the brilliance in his Aryan policies. However, to have a group of university scholars and professors write articles promoting the best of German values and refuting his Nazi philosophy angered him. And when it was discovered that an American woman had the courage to lead the resistance, this led him to single out Mildred Fish Harnack to be the only American-born woman executed directly at Hitler's express command. Many others were also arrested and executed.

Today, Mildred is honored in Wisconsin as a woman of courage, remembered for her bravery in leading the resistance and risking death to stand with her husband in the land they both loved.

As Jennifer reflected on her reasons for writing this book, which she began in 2014, she said she was touched by the fact that a Wisconsin woman had used the same libraries (e.g., Madison) where she did some of her research. As she discovered more about Mildred, she recognized that this group of women used their skills to fight Nazism from within the system. This taught her something special. There were no spies among them, no one trained in community organizing, no one working with a foreign power that expected their help, no one expecting a religion to "save them," no one who looked like a resistance movement member, no one waiting on male direction. They were simply students, educators, actors, musicians, writers and other ordinary people living ordinary lives in extraordinary times.

She noted the importance of a free press and how Hitler's bans led to the loss of truth in common parlance as government propaganda became the accepted norm. The anti-Semitism experienced by Jewish members of the resistance led to attempts by the community to fight back, usually ending in greater punishment for their beleaguered neighbors and friends. The loss of Jewish lawyers, doctors, teachers, actors and politicians led to a vacuum in leadership, giving Hitler the "right" to fill vacancies with loyal Nazis. Soon, the loss of basic freedoms like freedom of assembly led to a far different Germany from the country she had so loved and admired a few short years before.

Listening with hushed attention, the quiet audience was invited to ask questions.

Someone in the audience asked: "Did you write this with Trump in mind?"

"No," she responded. "My focus was on ordinary women responding to a dictator. In 2014, when I began writing this, Trump was not who he is today. If you think of Trump as you read this book, those thoughts are in your mind. If Hitler reminds you of Trump, that was not my intention. But if you, as a reader, recognize similar character traits and actions, then maybe this book will have influenced our country as a wake-up call more than I could have imagined."

She joked about the amount of hate mail she's received accusing her of negative comments about Trump. She said her 77-year-old mother helps her by reading all her e-mails from readers and deleting the hate mail.

Our evening concluded with applause for Jennifer as she reminded me of who I'm called to be.

Reflecting on the gifts I bring to these troubled times, I will choose one or two ways to respond. And I will try always to travel the high road, as Michelle Obama urged us, of American values.