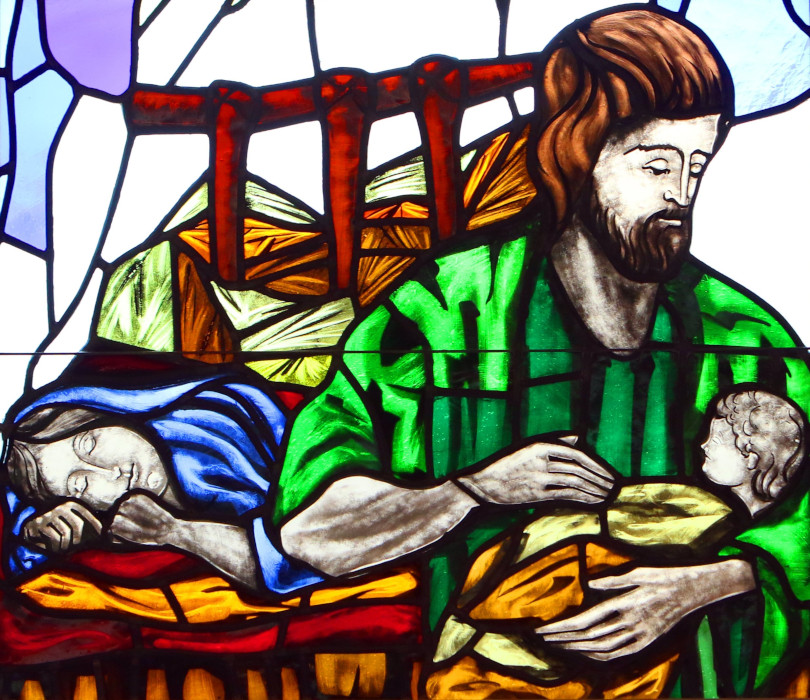 A depiction of St. Joseph cradling the infant Jesus while Mary sleeps is seen in this illustration photo. (CNS/Gregory A. Shemitz)

It was a bitterly cold night in the dead of winter 1868, and Bethlehem Academy was nearly out of firewood.

The fledgling school in Faribault, Minnesota, also served as a home to five Dominican sisters from Sinsinawa, Wisconsin, and several boarding students, and on that night, Sr. Gertrude Power, the 20-year-old superior of the convent, sent the boarders to bed early.

Then the sisters went to the chapel to pray for help.

The sisters' handwritten records describe what happened next: "Soon a loud knock was heard at the door. Power, though, startled, went bravely to answer the call. On opening the door, she found a large, burly looking man who asked her where he should unload the wood which was outside.

"After Sister had given him direction as to what he should do, quickly and without a word of explanation he unloaded the wood and drove away. To this day no one knows who the benefactor is."

But the sisters' congregation has long given credit to St. Joseph for this delivery. Whether those five sisters believed the man was Joseph himself or was sent by the saint, records don't say. It's presumed the sisters — then in their 20s and 30s — were praying for St. Joseph's intercession as they feared the imminent cold, for themselves and the children in their care.

All the congregation's sisters are aware of the story, said Dominican Sr. Lois Hoh, the archivist at its motherhouse in Sinsinawa.

"It's a fascinating story," she told The Catholic Spirit, newspaper of the Archdiocese of St. Paul and Minneapolis. "There's really no reason not to believe it."

She acknowledged the story was likely embellished over the years, but the first version, relayed above, comes from the Faribault sisters' "annals," summaries of life in their convent each year.

Hoh, 75, said she wishes the sisters had written more about the incident.

A few more details about that night — perhaps passed through oral history — are included in "Five Decades," a 1954 book about the Sinsinawa Dominican's first 50 years, written by a sister-historian. She added that the unknown man brought the wood on a bobsled, and sisters expected a bill to come from their fuel merchant, but one never arrived.

In 1868, Bethlehem Academy was only three years old. The founding sisters were among about 20 total sisters in their young congregation, founded in 1847, and they were the first to leave the motherhouse in southwest Wisconsin to begin a convent elsewhere.

St. Paul's second bishop, Bishop Thomas Grace, a Dominican, requested Sinsinawa Dominicans open a school in Faribault to honor a mother's dying wish for her young son and daughter to receive a Catholic education. The first five sisters traveled more than 200 miles up the Mississippi River to St. Paul before taking a stagecoach to Faribault.

Today, St. Joseph — whose feast day is March 19 — is Bethlehem Academy's patron saint, and the school, which includes grades six to 12, honors him with two statues: one outside in a prayer garden and another overlooking a stairway.

Hoh said it seems her congregation's sisters have a long history of devotion to the saint. Records show he was clearly called upon decades later by Sinsinawa sisters in Madison, Wisconsin, desperately in need of new buildings for their expanding school, Edgewood College. There, a chapel is dedicated to the saint, and a sister-artist depicted him in a mural.

Sinsinawa Dominican Sr. Theresa Thomas, 84, Bethlehem Academy's archivist, said she first heard the story as a Bethlehem Academy student. She said she believes the sisters turned to St. Joseph because he is the Holy Family's protector, and she thinks the story is worth reflection in this Year of St. Joseph, which the church is observing through Dec. 8.

"This is kind of a unique situation that we had, and I think everything is worth revisiting," she said.

Sr. Mary Margaret Murphy, 77, an administrative assistant at Bethlehem Academy, noted the natural connection between a school named for Bethlehem and its founding sisters seeking the intercession of St. Joseph, who provided for Mary and Jesus in seemingly bleak circumstances.

Plus, he's a carpenter, and the delivery was of wood.

Wiering is editor of The Catholic Spirit, newspaper of the Archdiocese of St. Paul and Minneapolis.