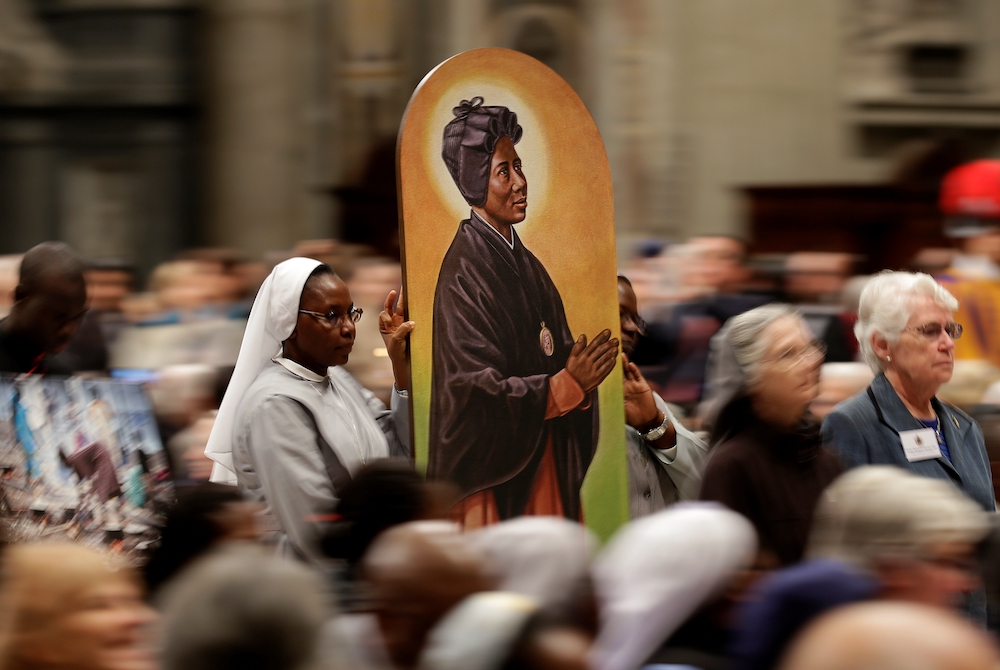 An image of Sudanese St. Josephine Margaret Bakhita, a Canossian Daughter of Charity, is carried in procession during a prayer service in 2017. (CNS/Reuters/Max Rossi)

Prayer marathons, informational seminars, survivor panels, and an international Twitterstorm are just some of the many activities taking place Feb. 8 for the International Day of Prayer and Awareness Against Human Trafficking.

The day coincides with the feast day of St. Josephine Bakhita, who was kidnapped and sold into slavery in Sudan, eventually gaining her freedom and becoming a Canossian Daughter of Charity. She is the patron saint of human trafficking survivors.

With women religious deeply engaged in anti-trafficking ministries all over the world — largely through networks united under the international Talitha Kum umbrella network — several organizations and congregations offer a variety of opportunities to commemorate this day of reflection against human trafficking.

Hosting an online prayer marathon, Talitha Kum (whose anti-trafficking member networks cover 92 countries) and the International Union of Superiors General (UISG) will offer a live broadcast of the seven-hour prayer in five languages, complete with personal testimonies that demonstrate the realities of trafficking around the world.

To raise awareness through Twitter, Talitha Kum is also encouraging participation in a "Twitterstorm" at 6:30 a.m. EST, the intention being to raise awareness of the issue through a simultaneous flurry of tweets from around the world, all with the hashtag #PrayAgainstTrafficking (always in English), as well as #EconomyWithoutTrafficking in one's language of origin.

Other congregations will host a virtual prayer service that day, like the collaboration between the Ursuline Sisters of Louisville and the Sisters of Charity of Nazareth. Their joint 40-minute prayer is at 7 p.m. EST on Zoom.

Joining the many sisters' efforts to honor this International Day of Prayer and Awareness, a coalition has formed to offer online events free to the public: a prayer service for reflection and action, followed by a virtual panel of survivor leaders who, in sharing their perspectives and experiences, hope to inform the work of advocates in the fight against trafficking. The group of sponsors includes the Coalition of Catholic Organizations against Human Trafficking, the Catholic Health Association of the United States, the John J. Brunetti Human Trafficking Academy at St. Thomas University College of Law, and the U.S. Conference of Catholic Bishops Migration and Refugee Services.

And this past month, Global Sisters Report and National Catholic Reporter hosted two informational sessions on human trafficking and the many ministries of sisters committed to its end, both featured in our Witness & Grace series. The first conversation featured Talitha Kum's international coordinator, Comboni Missionary Sr. Gabriella Bottani, and U.S. Catholic Sisters Against Human Trafficking member and founder of the Stop Trafficking Newsletter Sr. of the Divine Savior Jean Schafer. Both sisters outlined the complexities of trafficking around the world and the many roles that sisters take on in their commitment against it.

The second session featured Jennifer Reyes Lay, the executive director of U.S. Catholic Sisters Against Human Trafficking, and Felician Sr. Maryann Agnes Mueller, a U.S. Catholic Sisters Against Human Trafficking board member and the current editor of the Stop Trafficking Newsletter. That conversation included several calls to action, pointing participants to several resources and insights on how they can help combat human trafficking from where they are.

"Human Trafficking: It's Closer Than You Think," presented by Sr. Maryann Mueller and Jennifer Reyes Lay of U.S. Catholic Sisters Against Human Trafficking and posted to NCRonline's YouTube channel Jan. 24, 2021

This is the sixth year that Feb. 8 will be observed internationally as a prayerful day against trafficking. In 2014, the U.S. Conference of Catholic Bishops' Committee on Migration designated Feb. 8 as an annual day of prayer for survivors and victims of human trafficking; later that year, with Pope Francis' encouragement, the Dicastery for Promoting Integral Human Development and the UISG announced the date will be an international event.

If your community or organization is also hosting an anti-trafficking event on Feb. 8, and it was not mentioned here, feel free to submit the information to GSR's community news forum to share with our readers.