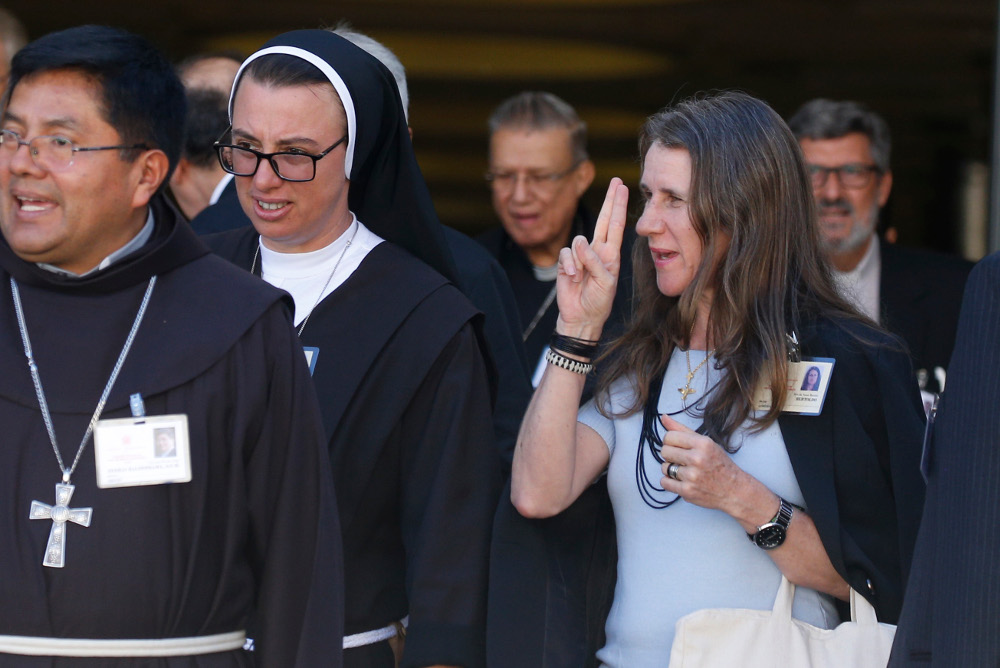 A woman gestures as participants leave a session of the Synod of Bishops for the Amazon at the Vatican Oct. 9. (CNS/Paul Haring)

One of the Catholic sisters taking part in the Vatican's Synod of Bishops for the Amazon has called for women religious attending the gathering to be granted the right to vote, saying their status as non-voting participants has been a "strong topic" of discussion.

Medical Mission Sr. Birgit Weiler, one of 20 sisters participating in the synod, noted that while a lay brother was appointed to attend as a voting member, the sisters were not.

"Pope Francis already … made it possible, saying it's not necessary [to receive] ordination to priesthood to be able to vote when you have participated fully in the whole process of sharing faith, of discerning together," said Weiler, a Peruvian theologian.

"We hope very much that something can happen there," she said during an Oct. 11 press briefing. "There is no real reason why not, because when the brethren can vote, women religious are equal."

The issue of women's voting has emerged as an issue in the past three Synods of Bishops, as Francis each time appointed one or two lay brothers as a voting member, but appointed the sisters attending as non-voting auditors or experts.

According to the Catholic Church's theology, brothers and sisters have analogous roles. They are each nonordained, professed members of religious orders.

Several groups have organized petitions and hosted demonstrations in Rome to call attention to the issue.

Weiler, who is part of the Peruvian bishops' commission for social action, said the topic had come up in past days in the small working group she was assigned to participate in during the synod. Those groups are known by the Italian term circoli minori ("small circles").

"In our circle, it has been a topic and a strong topic and has been cited by several bishops," she said.

The two Rome-based umbrella groups representing nearly a million members of male and female Catholic religious orders around the world are known to have been planning to jointly ask Francis to address the issue of women's role at Synods of Bishops.

Lasallian Br. Robert Schieler, one of two religious brothers who took part in the 2018 synod on young people, said he had raised the issue before that synod during a meeting with some of its organizers.

"One of them did get the question about what the Vatican is saying about why the sisters cannot vote," Schieler said in 2018. "And he said, 'Well, because you have to be ordained to vote.' "

"I'm not ordained," Schieler said. "So I'm wondering, is that the reason or not?"

During the Oct. 11 briefing, Weiler said she felt respected and listened to as one of three women religious in her synod working group.

"We experience that we are really accepted as part of the group," she said. "There is not a clerical attitude. There is a lot of freedom of speech and it is a beautiful experience really to discern together."

"I also heard from other women who are also participating in some other small circles that it is the same," said Weiler. "They say it's really an open atmosphere, so that also more critical questions can be put respectfully but openly on the table."

Weiler also called for women to have more positions of leadership in the global church.

"When we really want to become a church … [that] is a synodal church, really walking together, discerning together, then it means also to come to the point to decide together," she said. "That means to have more women in positions of leadership, and there's a wide field where you do not need to be ordained."

"It will be hopefully in the future much more the reality that women — lay women, religious women — will be invited to also assume responsible positions," she said.

The Synod of Bishops for the Amazon has 12 working groups, divided by language preference.

There are 184 bishop and priest voting members of the gathering, and one member who is a religious brother. There are 80 non-voting participants, of whom 35 are women.

For most of the Oct. 6-27 event, there is little distinction between voting members and non-voting participants. But only voting members will be able to express formal approval or disapproval of the gathering's expected final document.

This story appears in the Synod for the Amazon feature series. View the full series. 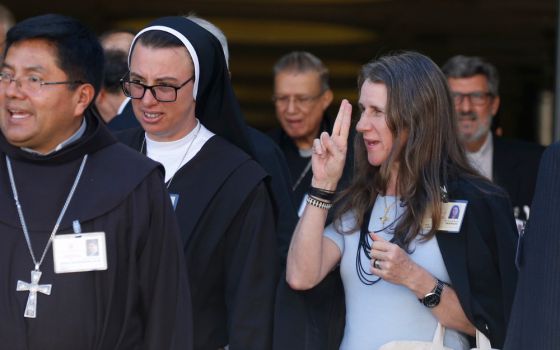