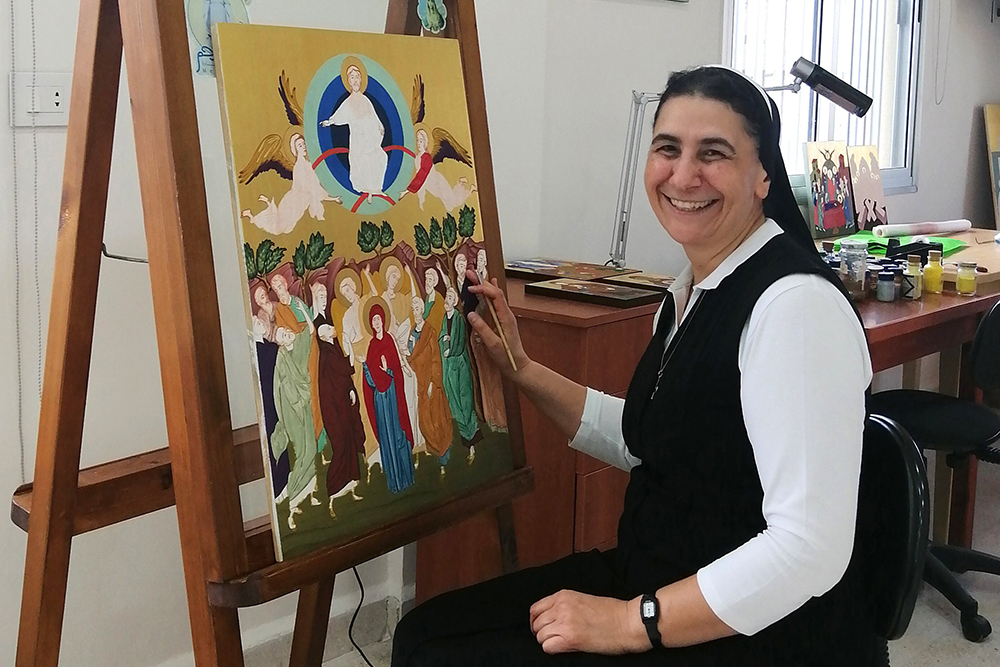 Melkite Sr. Souraya Herro poses with some of her artwork Sept. 7 in her workshop at the convent of Our Lady of the Annunciation in Zouk Mosbeh, Lebanon. (CNS/Doreen Abi Raad)

In London, prayers now rise up to God from the shrine of Mary, Mother of Persecuted Christians, and also from Lebanon, where the shrine's icon originated.

The shrine is in the Church of Our Lady of the Assumption and St. Gregory in central London, but the nun who wrote the icon is from the Melkite Catholic community in Lebanon.

Melkite Sr. Souraya Herro of Lebanon wrote the icon based on a traditional image widely known as the "Mother of Tenderness." She said it was a joint effort with Melkite Sr. Wafaa Fayad. Herro sketched the icon, and Fayad painted the garments of Mary and the Christ Child, with Herro concentrating on their faces and hands.

Fr. Benedict Kiely, founder of the Vermont-based nasarean.org, an aid and advocacy group for persecuted Christians, said the London shrine is the first in Europe specifically dedicated to prayer for persecuted Christians throughout the world. He has established a similar shrine at St. Michael's Church in New York City, and another will be blessed at St. John the Evangelist Church in Clinton, Massachusetts, in October.

Kiely said he heard about Herro from the Melkite community.

"Her work is beautiful," the priest said of the Lebanese nun. He said that in commissioning the icon, it's a way of helping the sisters in their mission at the convent of Our Lady of the Annunciation in Zouk Mosbeh, north of Beirut.

His organization also helped to reconstruct Herro's iconography workshop there, which lacked electricity and had become run down from water damage.

The priest said London, like so many big cities, is multicultural, with diaspora from places in the world where Christians are facing persecution: China, Nigeria, Iraq and Syria. "So, it will be a wonderful for them to come and pray for their families still there."

"When Father Benedict asked me to do the icon, the first thought that came to mind is that it's very touching that people in London are thinking about persecuted Christians," Herro told Catholic News Service.

"When I was writing this icon, I was always praying for them and thinking about them, the people in London who will see the icon," she said.

She began working on the icon in February, finished it in April and presented it to Kiely when he visited Lebanon in June.

Herro believes Kiely chose this image to be the mother of the persecuted "because she is tender and can feel their pain."

In the icon, Herro explained, Mary is pointing to her son as if to say: "Look at him."

"She's the one who shows the way," Herro said. Jesus is not looking at his mother, but is gazing outward in an attitude of contemplation. 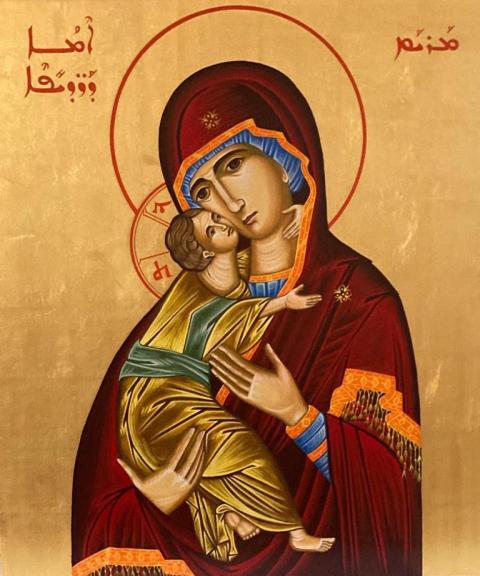 This icon of Mary and the Christ Child was written by Melkite Sr. Souraya Herro for the Mary, Mother of Persecuted Christians shrine located in the Church of Our Lady of the Assumption and St. Gregory in central London. (CNS/Courtesy of Benedict Kiely)

Every process in the writing of the icon, Herro said, has a theological meeting.

Just to prepare the "canvas" of the icon — typically wood — requires seven layers. That represents the seven days of creation.

"The icon is a place where I can live my spiritual life, because the icon brings you closer to God," Herro said.

"People always ask, 'Do you pray and fast before you write an icon?' " the nun shared. Rather, she said, "it's the icon that teaches me how to pray, how to live, how to be patient."

"In the silence, when contemplating, the time that we spend with the icon is a very powerful experience," she said.

Herro said one of the most important steps in creating the icon is writing its title. "It's the final step."

"Every icon must have a title, and the title gives the icon its identity." Typically, it is written at the top of the icon, but not necessarily so.

The title, "Mary, Mother of Persecuted Christians" is written in Syriac, a dialect of Aramaic, the language of Jesus, still used in Iraq and Syria and in the liturgies in some Eastern churches, including the Maronite and Syriac Catholic rites.

Kiely said he hopes to have many more shrines for persecuted Christians with icons and, he said, "Sister Souraya will do most of them."