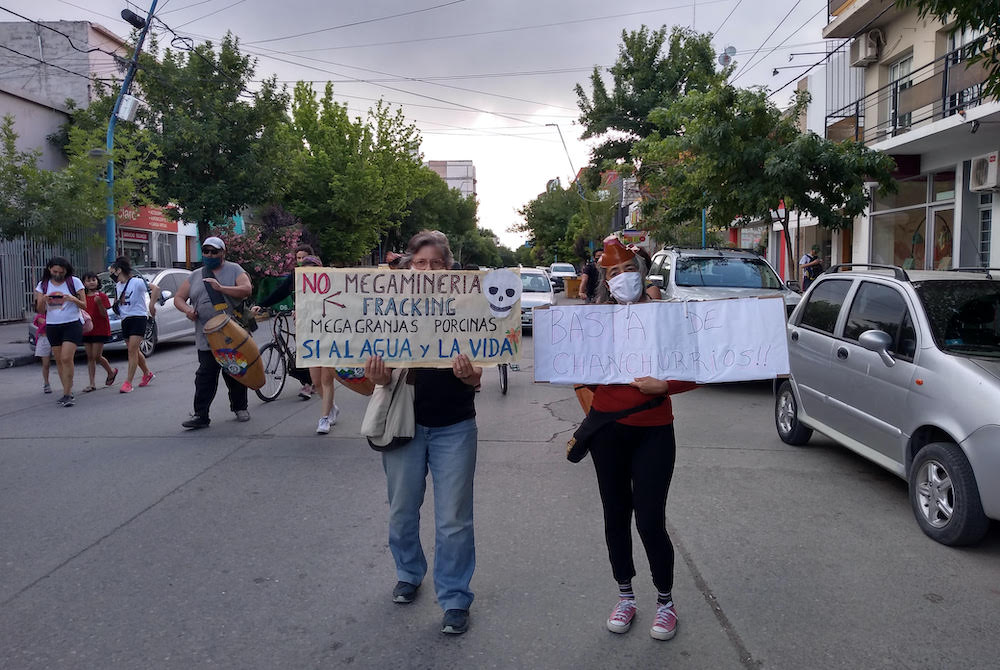 Mercy Sr. María Siufi marches with a group of protesters against fracking in Argentina. (Courtesy of the Sisters of Mercy of the Americas)

Are we getting used to committing ecocide with intentional fires in our own territory — or just anywhere on the planet?

For decades, there have been fires in the Argentine Patagonian Andean Mountains, in our beautiful native forests that have such wonderful biodiversity. Many of the fires are the products of natural phenomena, or careless campers, but there are also fires that have been set intentionally.

In March, there were a number of intentional fires in native forests and in monocultures of pine trees in the Rio Negro and Chubut provinces. For the first time, they caused the death of three rural workers, and many other people were seriously injured. Neighborhoods caught fire, and it is estimated that well over 200 — some say 392 — houses burned down. The people whose houses were burned lost everything: their homes, possessions, vehicles, memorabilia and perhaps their workplaces. Their everyday lives were turned upside down and their life projects destroyed. Besides that, great damage was done to the local energy, gas and water infrastructure, affecting thousands of families. 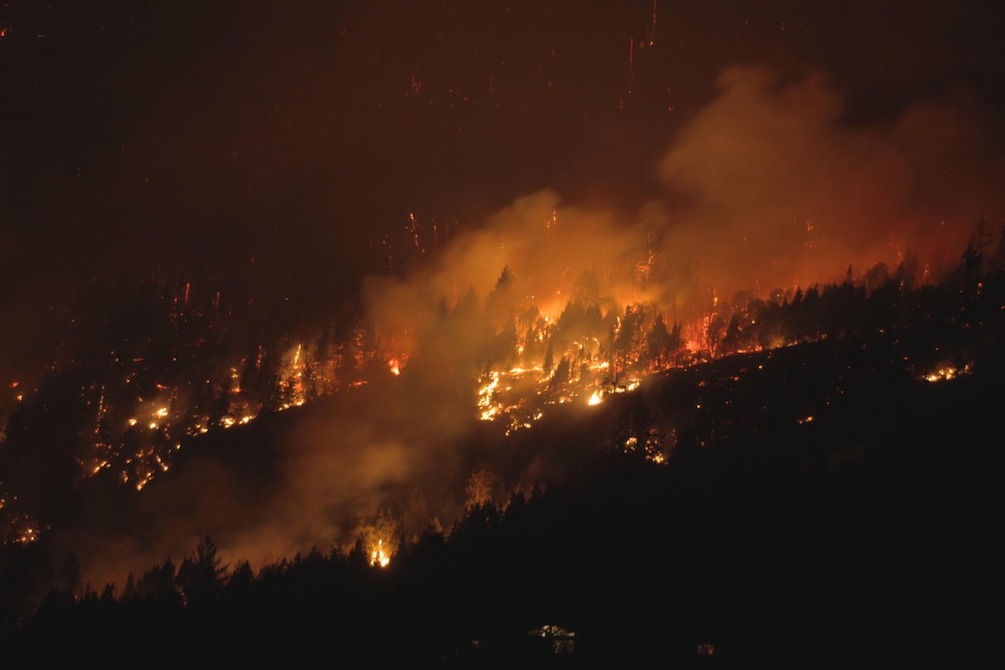 Fires burn in Lago Pueblo in Chubut, Argentina, March 27, 2021. (Courtesy of the Sisters of Mercy of the Americas/Jimena Haro)

For years, the national and provincial governments have not been investing in the means to prevent, control and fight fires, even though it is known that they take place every summer — and are made worse by forest monocultures that produce highly flammable material.

Patagonia is vast and rich in natural resources, but a few powerful people want to keep everything for themselves. We need to demand more citizen participation in disaster prevention and in territorial planning for sustainable production and the care for ecosystems.

Could it be that this territory is considered a zone to be sacrificed? What dark interests are hidden behind these fires? We know that both the Rio Negro and Chubut provinces want to change the traditional productive matrix in favor of mining. On the plateau and in the mountains there is gold, silver, copper, uranium and other metals that would bring windfall gains. There are some people who want to carry out mining projects without any previous consultation and ignoring the popular resistance to their plundering and "ecocidal extractivism."

There are also beautiful landscapes with mountains, forests and abundant crystal-clear lakes that call rich foreign and Argentine people to invest in real estate and in large-scale tourism projects. For this reason, the government is allowing the uncontrolled appropriation of lands by foreign investors, while scandalous campaigns are being waged that accuse the Mapuche people of setting the fires, or criminalize them for wanting to recover their lands.

The Mapuche-Tehuelche people undoubtedly know how to look after the forests, water and all the territory with ancestral love.

Mauro Millan, a Mapuche lonko (chief), spoke against the accusations:

We have been living in democracy for years, and rights exist but they are not applied — and we are going back to old times as privileged people take advantage of private property. Apart from this group of businessmen, government officials, judges, prosecutors, lawyers and landowners, we have the corporate media that support the economic, political privilege over this territory. The media spread a message of hatred against the Mapuche people … and misinform millions of people who end up reproducing what they see, hear and read.

On the other hand, what is noteworthy is the great local, regional and national solidarity and action campaign of neighborhood groups and citizens who travel to the area or send food, furniture, construction materials and all types of assistance, showing once more that our people can get together and be present in the face of human pain. 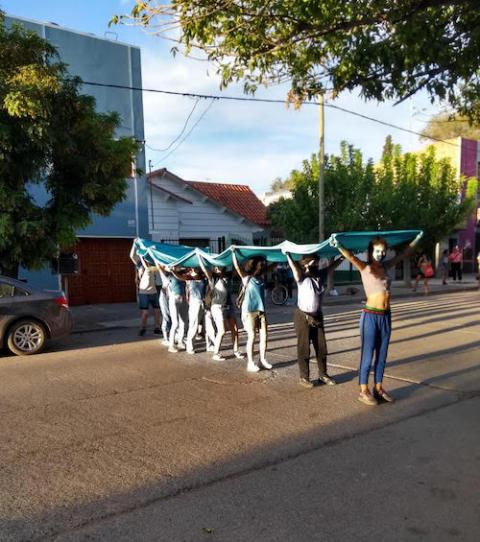 Newer members of the Social-Environmental Assembly in General Roca, Argentina, use street art — like corporal expression, murals, poems hung from trees in the plazas, music festivals, radio programs, posters, marches — to continue the fight against the devastating extractivism. Here, they are demonstrating for water preservation. (Courtesy of the Sisters of Mercy of the Americas)

Climate change with extreme weather phenomena and the global market's predatory actions are growing dangers, but love for Mother Earth encourages the struggle of the indigenous people and most of the population against the plundering by the extractive industries, for the preservation of our land and our water.

I have been part of the Social-Environmental Assembly in my city for more than a decade. Participation has had its ups and downs, but since last year we have had an infusion of new and young energy from members that use street art — like corporal expression, murals, poems hung from trees in the plazas, music festivals, radio programs, posters, marches — to continue the fight against the devastating extractivism. We are not alone; there are social-environmental assemblies in every city or town in the region that defend the water, earth and air. New groups are being trained in places where there are no assemblies and are learning from experienced people how to resist the bad development brought about by neoliberal policies and powerful transnational companies.

The enemy is powerful but keeps us unified. We are supported by a love for Mother Earth that is felt by the Mapuche people, farmers, intellectuals, artisans, workers and (too few) religious men and women. I must also say most of them are women!

May the Spirit that is Fire, Wind and Water sustain us and illuminate our days as Caretakers of Life! 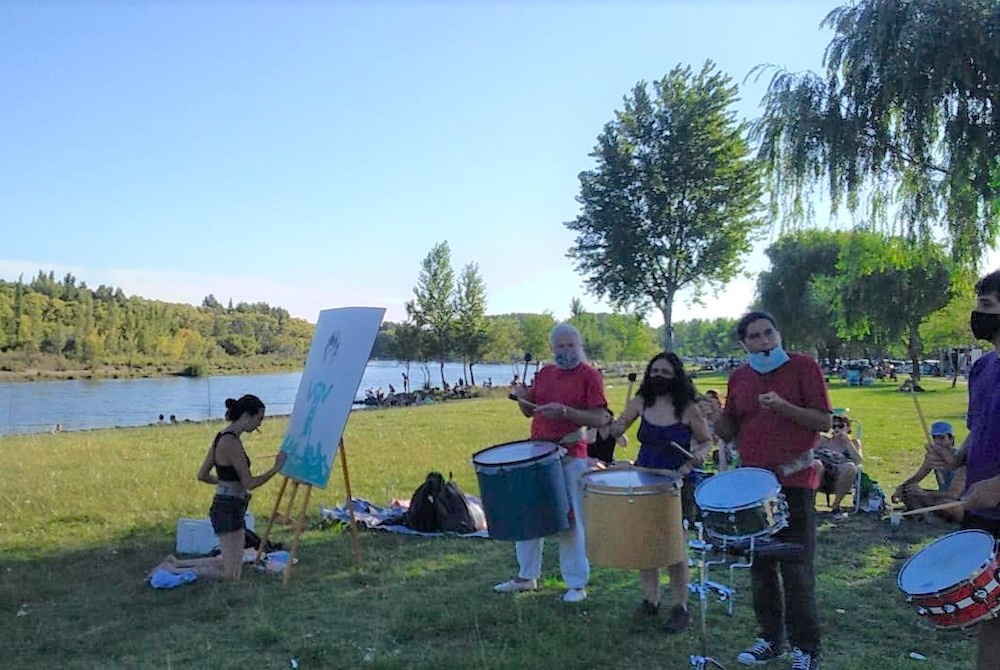 Activists in a park in General Roca, Argentina, paint and drum to draw attention to the damage caused by extractive industries. (Courtesy of the Sisters of Mercy of the Americas)