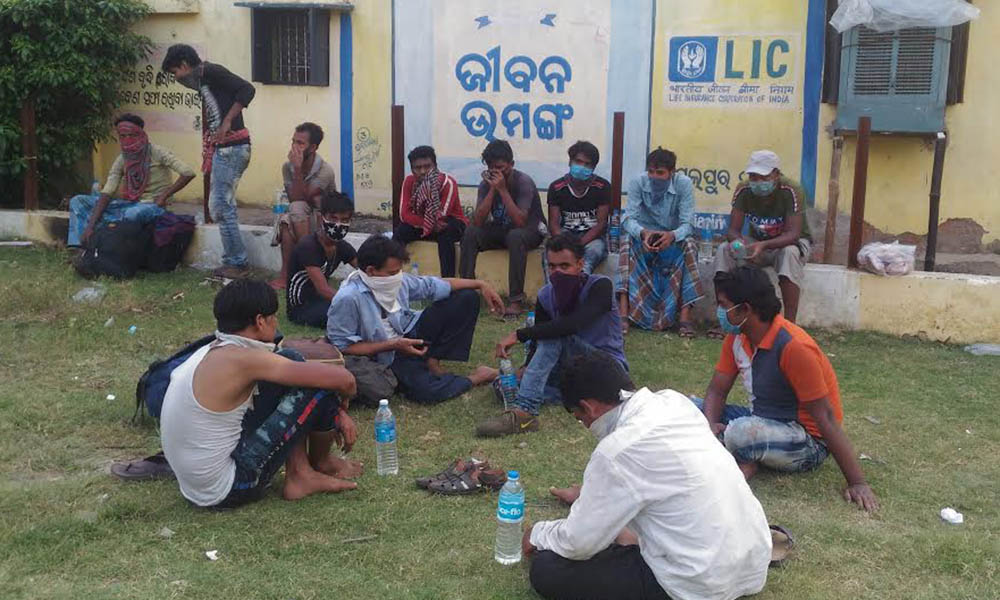 Migrants from Maharashtra traveled by truck and were left May 25 at Bondamunda, Odisha, in India. They sat in the sun without food for an entire day. The author and her congregation, the Missionary Sisters Servants of the Holy Spirit, gave them food and made arrangements for their further travel to West Bengal. (Provided photo)

The moment the COVID-19 lockdown started, I felt fear deep within. My inner voice was saying "stay at home," but the cries of the thousands of the migrant workers all over the country kept me disturbed until I went out to help them.

Welcoming a stranger is an important evangelical virtue for Christians. Every human being has inalienable rights, so caring for migrants is a significant mission of the Catholic Church.

The Bible begins with the migration of God's Spirit into creation, and ends with John as a refugee in exile on the Isle of Patmos. Between those two events, the uprooted people of God seek safety, sanctuary and refuge, and God gives directions for welcoming a stranger.

In his 2013 message to migrants and refugees, Pope Benedict XVI spoke of the integration of migrants and refugees into society. On the World Day of Migrants and Refugees in 2016, Pope Francis said in his address that the situation of so many men, women and children forced to flee their homes must challenge us and break the barrier of indifference.

In 2000 my congregation, the Missionary Sisters Servants of the Holy Spirit and the Divine Word Missionaries began what is now a consortium of 12 religious congregations called VIVAT International, a nongovernmental organization that advocates at the United Nations. Representatives in New York and Geneva link the ministries of our members with the United Nations.

I attended the first workshop VIVAT organized — in Indore, India, in August 2011 — about problems faced by domestic workers and migrants. Inspired by this workshop, my congregation prioritized the issue of domestic and migrant workers and addressed them in all our mission areas.

When our federal government imposed national lockdown in March to contain the spread of COVID-19, millions of Indian migrants struggled as factories closed down. They lost jobs and were desperate to return home in that uncertain time. With no food, water or public transportation, they commuted hundreds of kilometers on foot—dying of hunger and exhaustion, suicide, road and rail accidents, police brutality, and denial of timely medical care along the way. Local and federal government help came too little and too late.

Heartbreaking stories of the migrant workers are too many to recount. I saw many migrant workers returning to their native places by means of inadequate transportation and with no food. I was dumbfounded to see many women and children packed among men — like merchandise — in trucks and other goods carriers. Many days of the painful journey were unforgettable, and the pathetic life that they endured after the lockdown cannot be expressed in words.

Thirteen groups of migrant workers native of Odisha who were in Tamil Nadu, Gujarat, Karnataka, Delhi, Mumbai, Telengana and Kerala were wanting to come back due to unemployment, financial crisis, starvation and fear of getting infected with COVID 19. When our community in Odisha was contacted to extend our help to the returning migrants, we networked with priests, sisters, laypeople and organizations in different parts of India to work towards the migrants' survival and safe return home. We did the following:

As I started to network, I witnessed many good Samaritans — especially the Don Bosco Priests, Jesuits, Divine Word Missionaries, Pallotine priests, the Excellent IAS Academy, Sacred Heart of Jesus and Mary, Handmaids of Mary sisters, and Missionary Sisters Servants of the Holy Spirit, my own congregation, who spent their time, energy, resources and finances willingly and generously, and above all, risked their own lives to support the migrants in need.

Five girls from Kantapalli village, living in the south, had no food to eat. When we asked, the Don Bosco priests in our network provided all the help for their immediate needs and train tickets. They reached Odisha safely and after quarantine, they are at home now.

Two boys from Birjapalli (Odisha) lost their jobs in Delhi. They managed to get partway home, and the Pallotine priests were contacted to help get them the rest of the way home.

Three girls from Duburi, Odisha, working in the south, lost everything and wanted to return home. With the help of the Don Bosco priests, two girls reached home safely and the third girl was admitted to a hostel.

Twelve migrants from Sundargarh district, working in the south, were faced with extreme difficulties and decided to return home. They informed their supervisor of their desire and need to return home. He gave them a false promise that he would send them home soon. When this promise was not fulfilled even after many days, they contacted us for help. Through stern warnings to the supervisor and appeal to the local police, all 12 returned home safely.

The Jesuits helped us return another group of migrants, and the Don Bosco priests rescued 18 who had lost their jobs and were bankrupt. Nine migrants from Bihar on the way to their working place were held in Rourkela for almost two and a half months, without work. A Divine Word priest and his staff in Rourkela fed them and helped them to reach home safely.

Two girls below the ages of 18 from Rourkela slum, Odisha, doing domestic work in Delhi, were jobless and struggled for food after the lockdown. A Divine Word priest was contacted; he gave them necessary provisions and planned to get them tickets for their return home.

A group in Kerala, South India, and another in Delhi, did not lose their jobs, but were afraid of infection and wanted to come back. Divine Word priests offered them counseling and convinced them to stay on.

Thousands of other migrants were helped with food and traveling arrangements. Their painful journeys were unforgettable and the pathetic life that they lived after the lockdown cannot be expressed in words.

We are visiting migrants who have returned home safely, and have facilitated their sharing their difficult experiences of isolation, fear, helplessness, uncertainty, anger, and loss of money and jobs. And we visit those in quarantine centers to address psychosocial issues and to sensitize them on safety measures.

Today we witness many mothers, fathers, youth and children who are holy families migrating in hope as well as fear, for peace, security and a semblance of home, We open ourselves to their stories and pray for mercy for all migrants, and for our communities who are challenged to welcome them, to give them hope for a new life. Pope Benedict XVI called us to understand the causes of migration, to feel solidarity with those who migrate, and to work for safety and justice for those who flee poverty and war.

The "Justice Peace and Integrity of Creation Manual" of our congregation says,"For us Christians especially religious to remain silent and unmoved in the face of such tragedy, such violence, and destruction, is a denial of the Gospel." Let the struggles of every migrant in our vicinity continue to disturb us.

[Sr. Sophia M. Arockia Mary of the Missionary Sisters Servants of the Holy Spirit is the migration ministry coordinator of the India East province of the congregation, in Odisha, India.]