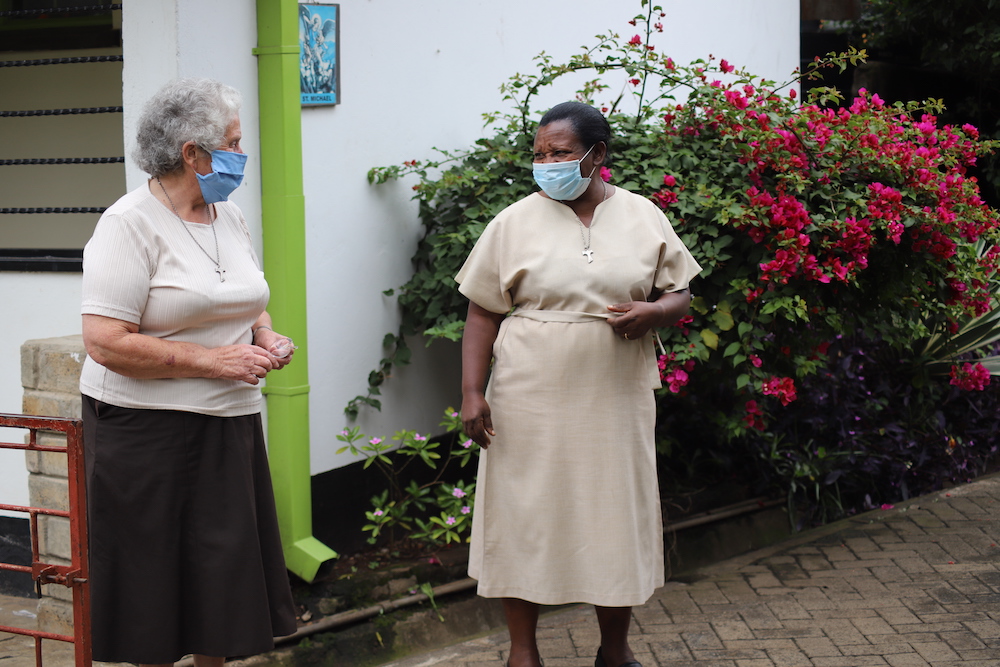 Sr. Miriam Duggan, left, interacts with another sister at Cheshire home for the elderly in Kariobangi slum in outside Nairobi, Kenya. (Doreen Ajiambo)

When Sr. Miriam Duggan was sent on mission to Africa, she had no idea what she was going to face, but her passion was always serving those who live in poverty and the less privileged as a doctor. She was first posted as an obstetrician in Uganda, where she headed the maternity unit of St. Francis Nsambya Hospital in the capital Kampala for 30 years.

Now 83, the native of Limerick, Ireland, and member of the Franciscan Missionary Sisters for Africa now ministers to hundreds of youths in Huruma estate in Nairobi, Kenya, where she has delivered programs on rehabilitation and character formation since 2014.

"I had no idea what Africa was like when I came, as I had never gone beyond Europe," she told Global Sisters Report at Cheshire convent in Nairobi. She came to Africa from Ireland in 1969. "My desire was to help disadvantaged people on the margins of society; this made me think of Africa."

While in Uganda, Duggan faced challenges. In early August 1972, the president of Uganda, Idi Amin, ordered the expulsion of his country's Asian minority, giving them 90 days to leave the country. Her colleague who was the head surgeon at the hospital had to leave because she was of Asian descent.

"I took all the responsibilities," she said, noting that during the three coups trying to overthrow Amin, she had to deal with many gunshot wounds. "I spent days and nights alone, struggling to save lives as the numbers of injured was overwhelming. Even as the gunshots rang out and the bomb blasts could be heard, we struggled on in the [operating] theater."

"Working in Africa, one lacked the support of other consultants, and one often had to cope with situations which were not your specialty. Standing up for what was right took courage, especially in the whole area of abortion," she added.

GSR: Tell us about yourself and how you became a sister.

Duggan: I was born second in a family with six siblings. I went to Laurel Hill Secondary School, Irish division, which was run by the Faithful Companions of Jesus, and my experience with the sisters in school led me to decide to become a nun.

After college, I began to work once a week with the Legion of Mary group from Laurel Hill Secondary School. The group was involved with a Presidium that visited homes where children had been up in court. There, I got my eyes opened as to what was happening in dysfunctional families, and the thought of religious life began to enter my mind, something I resisted in the beginning.

My desire to help disadvantaged people in society kept growing. I began to think of Africa. This led me to contact the Franciscan Missionary Sisters for Africa, and on Feb. 2, 1956, I entered their formation house, which was at Mount Oliver, Dundalk [in County Louth, Ireland].

Can you tell us about your ministry as an obstetrician and a health worker in different African countries, especially in Uganda?

A few weeks before first profession, I was asked if I would be willing to study medicine. I was taken by surprise, as the thought had never crossed my mind. In those years, very few women studied medicine.

In 1969, after I acquired my master's in obstetrics and gynecology, I went to Uganda. It was a very busy time, as the numbers seemed to grow yearly, with deliveries of over 8,000 per year. It was also a referral place for complicated cases, such as obstructed labor, ruptured uterus, severe anemia, and many cases that were badly infected from people trying to deliver in the village.

In a similar way, there were many complicated gynecological cases, such as vesicovaginal fistula, rectal tears, and very large fibroids, plus the need for reconstructive surgery in cases with blocked fallopian tubes leading to infertility. In my training, I had never seen a vesicovaginal fistula, but seeing the stress in women with these complications made me study the books and with a prayer started the first cases, trusting God to bless my hands.

At the same time, there was great joy serving the Ugandan women and the obvious joy and celebration at the birth of each child. Twins were considered a very special blessing. Helping a woman to conceive or to stop recurrent miscarriages brought great delight.

At Nsambya Hospital, I was involved in training midwives and doctors. As a missionary, I believe it is important to pass on skills and empower others, even if it means doing yourself out of a job. It gave me great delight to see others qualify and to be able to hand over the running of the Department of Obstetrics and Gynecology to a Ugandan doctor whom I had mentored. 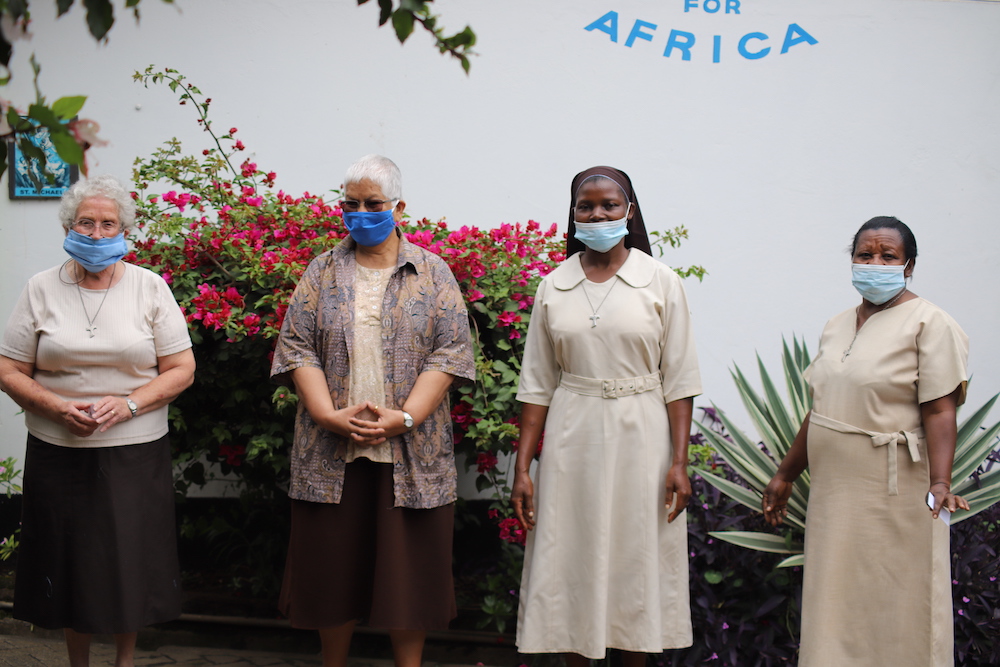 Sr. Miriam Duggan, left, and the other members of Franciscan Missionaries for Africa at Cheshire home for the elderly in Kariobangi slum outside of Nairobi, Kenya. (Doreen Ajiambo)

You've won several awards, like the Irish Presidential Distinguished Service Award in 2015, and you were also honored by Harvard University, Church of Uganda, and the Templeton Foundation for pioneering behavior-based HIV prevention. How did these awards help your work?

While I may have been named the recipient of the award, I have always recognized that I never did this work alone and endeavored to share the joy with all those with whom I have worked with and to give the glory to God, who aided me every step of the way. The only difference the awards made to my work was that it meant I got many invitations to speak to a variety of groups. The only motive in doing the various activities was for the glory of God and the service to his people.

What motivated you to start working with people with HIV/AIDS, and how was the experience?

When the HIV/AIDS pandemic broke in 1987, it spread very rapidly in Uganda. At the time, I was medical superintendent at the hospital, and we were unable to cope with the numbers of very sick people. At one time, we were caring for over 3,000 patients, with three teams on the road daily.

As I sat at the bedside of a young man who was dying of AIDS and witnessed his struggle, I was challenged to do something to try and prevent this misery. Many groups were advocating the condom as the answer, but as a gynecologist, I knew condoms only reduced the risk, and many were defective due to exposure to the tropical heat and light. We needed to look at the behavior that was at the root cause and also come up with a solution.

I started training many young people in this process, and soon after, many schools, parishes and institutions were looking for seminars to be conducted.

As time passed, Youth Alive clubs were started where young people continued to be encouraged to live abstinence until marriage.

Right now, you work with the Franciscan Missionary Sisters for Africa's Hands of Care and Hope program [a center for children living in poverty] in the slums of Nairobi, which is a completely different field from what you studied. How has it been?

I enjoy the working among the very poor, and seeing them get back their dignity and stand tall is award enough. Many people condemn the youth in these areas, but at heart, they are good people. They just need to be given a chance in life, to know that they are loved by God and that he has a plan for their lives. In a sense, it is another aspect of the healing profession.

Health care has gone through many changes over the years. Can you tell us your experience then and what changes you have seen all through the years you were in the ministry?

Health care has gone through many changes over the years due to the great advancement in technology. In the early 1960s, one was trained to listen to the patient carefully, use one's power of observation, and clinically examine a person using a stethoscope and one's hands to palpate. Today, many doctors rely more on X-rays, scans, MRI, and a whole variety of blood tests that now are available in order to make a diagnosis. Due to more facilities being available and improved transportation and level of education, one probably sees less severe emergencies. The maternal death rate has been reduced, and the lifespan of people has been extended. Sadly, due to the legalization of abortion in many countries, this progress in medicine has made the Hippocratic Oath taken by doctors to do no harm lose its meaning. 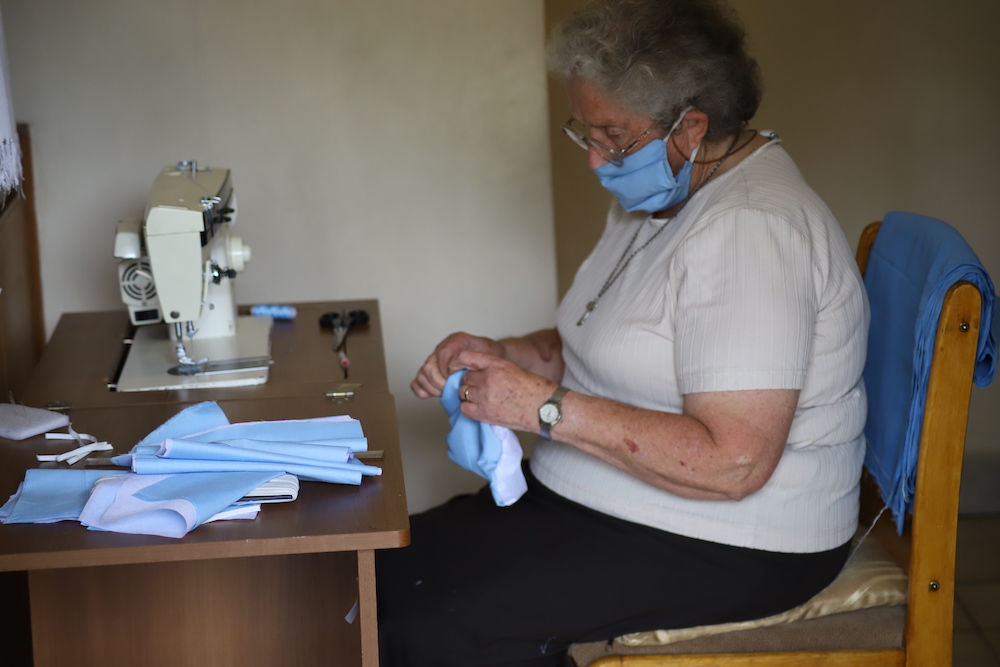 Sr. Miriam Duggan makes masks to be distributed in the slums to help protect residents against COVID-19 at Cheshire home for the elderly in the Kariobangi slum outside of Nairobi, Kenya. (Doreen Ajiambo)

Going through the highlights of your career, is there anything you haven't done?

There are many things I have not done and many things I would wish to have achieved in helping the spread of the Gospel and in helping people on the margins of society. All I can say is that I have done my best to respond to whatever situations God has led me into or put in my path. I have tried with his help to meet the challenges, being aware of my own limitations and weaknesses. I believe in the word of St. John Bosco: You do your best, and God and Our Lady will do the rest.

How has COVID-19 affected your current ministry?

In response to COVID-19 in Kenya, I am motivating young people to be involved in educating people in the poor community about the pandemic. I also make masks together with the youth.

Many people are hungry. The challenge was, and still is, to solicit funds or food to be able to distribute food to poor and vulnerable families within the slums. To date, we have been able to assist over 900 poor families with food distribution, which is ongoing. At present, we are not able to have gatherings, so the seminars have been canceled.

As a religious sister who has worked in the health apostolate for many years, are there areas you think the church itself should address?

Spiritual healing is all part of healing of the person and was all part of Christ's mission, and so it should be among Christians. These services can bring about a great spiritual renewal in individual lives as well as that of the church. In my medical work, I frequently prayed with patients and saw the results. The final healing is through death and resurrection to new life in Christ, and therefore, the church has a very important task of helping people prepare for death, with peace relying on the mercy of God.

What was your motivation all through your ministry?

My motivation through my ministry was that of my missionary vocation of bringing the love of Christ to people and spreading Gospel values. The medical work was a service that gave one an opportunity to reach out to people in love and concern. The advice I would give to sisters entering into the health profession would be to do it out of love for God and neighbor and on the spirit to guide you. Know that it is a life that demands sacrifice.