by Maria Longo
Arts and Media
Spirituality
This article appears in the Notes from the Field feature series. View the full series. 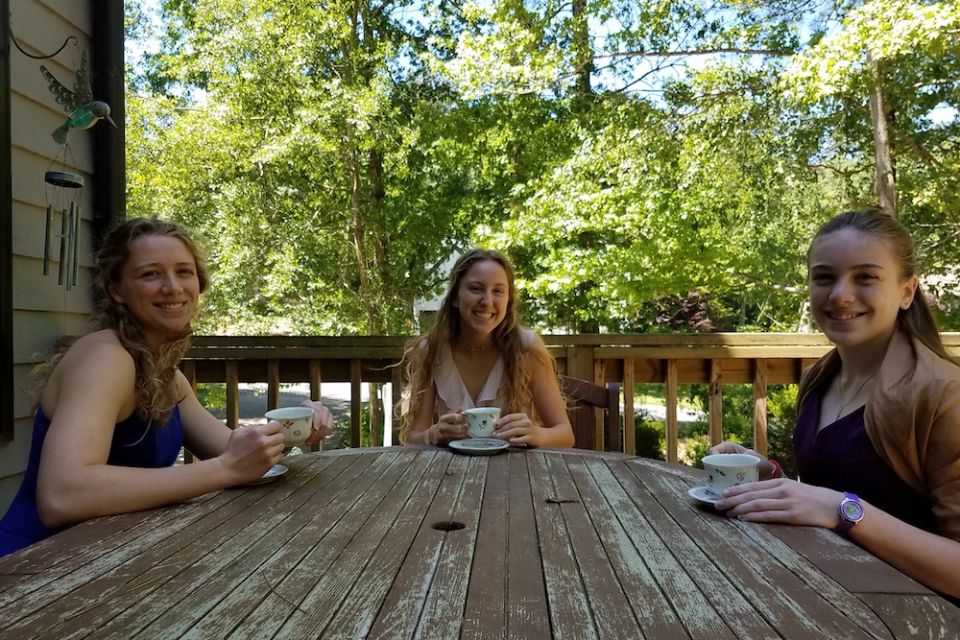 My sisters Elena, Marilena and Luisa at one of our princess tea parties where we discuss Disney's princess characters' motivations and goals after watching the animated films (Maria Longo)

Powder Springs, Georgia — Upon speaking with my old roommates and fellow missionaries, I came to the horrible realization that our screen time since the beginning of seclusion has increased exponentially.

Of course, allowances must be made for work (Zoom calls, faculty meetings, one-on-ones with students, community circles, etc.), and the unfortunate truth is that the liturgy — at least for the vast majority — can only be prayed while watching it being celebrated online. Outside of these two realms, however, I have seen a rise in the amount of time spent staring into LED lights by me, my family and my friends, at least.

Enclosed and limited in our typical stimuli, many of us have turned to virtual games and television. I am grateful for the fact that my immediate family contains 11 people, all still living in one house, and I have not been lacking for companionship.

Because most of my siblings are below the age of 18 and are predominantly female, we have begun a Disney marathon containing the entire category classified as "Disney Princess movies." Between movies, we play dress-up and have afternoon tea and dance parties, as well — mainly because of school closures and the subsequent cancellation of prom and other school events.

We decided the best plan of action would be to simply "start at the very beginning, a very good place to start," if you know what I mean. That first night, when Snow White appeared on our television and began singing into the wishing well, something occurred to me. This tiny, nasally German princess was actually speaking a great deal of truth in regards to the eternal soul's desire for union with the Other.

The deeper we plunged into our challenge, the more I noticed the Truth speaking through flashy scenes and horribly catchy musical numbers. I realized then what I had begun to realize as a younger version of myself: Every girl — and every soul, really — desires to be and is that "princess" figure, a dynamic character in search of something far beyond the self. That something can best be described as Love himself (whether the soul realizes it or not).

Snow White gives us a pure desire for love: love of service, love of nature, love of neighbor, love of spouse. Similarly, Sleeping Beauty Princess Aurora presents a classic question in "I Wonder," when she muses over whether she, like her woodland friends, will also love and be loved.

From the "classic" princesses, we shift to the princesses who deal with slightly more complex and interior growth: Belle, Jasmine, Ariel and Mulan.

"I want adventure in the great wide somewhere ... and for once it might be grand to have someone understand," Belle bewails after a lovely group number in town. She, like several of her princess peers, desires more than the person others would have her be.

Jasmine, while having her noble title from birth, finds her eyes opened to the beauty of her lover and savior, the same way many great mystics — St. Thérèse of the Infant Jesus, St. Faustina, St. Catherine of Siena — revel in the glory of their Savior and the "whole new world" he shows them. And who among us has not at one point contemplated the issue of reconciling the exterior self with interior self, as Mulan does?

When I used to clean and keep the sacristy of our Catholic student center in college, I would often sing "Part of Your World" by Ariel, "The Little Mermaid," to myself and laugh at all the strange treasures I would find in the cabinets. Like the little Catholic nerd I was, I would proceed to clean the sanctuary in silence, wondering to myself when and if I would follow the saints and see "that shore up above." I was perhaps a bit obnoxious and idealistic, but as in the words of Princess Anna of Arendelle, "some things never change."

With the coming of Pixar and new means of animation came another shift in the dynamic of the Disney princess. Here, I might place the characters into two categories: the virtuosos and the wannabe vocations.

The virtuosos — Tiana, Rapunzel and Anna — already embody a large amount of virtue and are thus, pardon the pun, virtue-osos in that they have already mastered and practice several fine qualities: diligence, honesty, modesty, justice, fortitude. Meanwhile, the other princesses — Pocahontas, Merida, Elsa, Moana — bring to life a theme that audiences glimpsed in the character of Belle, the desire for adventure and "romance." The romance I speak of here is not the modern lovey-dovey term, but rather, the original genre.

These princesses enter more deeply into the chivalry, heroism and mystery of their stories, playing out that particular struggle many recognize as discernment of vocation. In them, one can see a slew of emotions (fear, frustration, sadness, anger, resentment) that can accompany the internal torment of self-discovery. "No escape from the storm inside of me," or something like that. 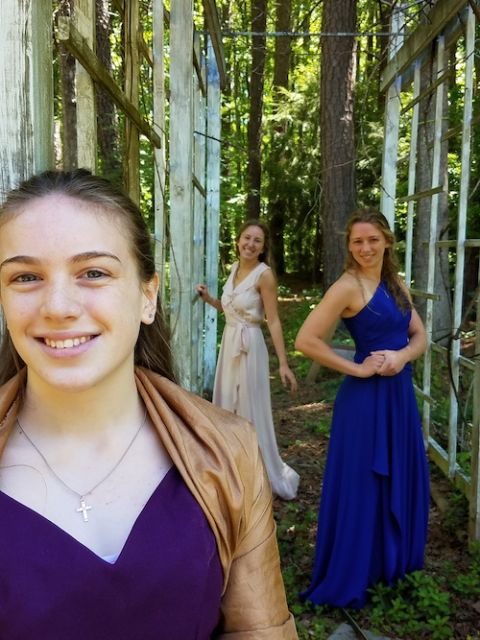 My sisters Luisa, Marilena and Elena under the arbor at our parents' home (Maria Longo)

However, in them, we can also recognize the beauty of a soul transfigured. Pocahontas encourages us to seek "what's around the riverbend," and Merida echoes her in her desire for personal improvement over arranged marriage. The two figures that strike most closely to my heart, though, are Elsa and Moana. Their songs never fail to give me goosebumps, and no, it's not because of their voice actors' belting. Rather, what moves me is how relatable their parts are to discernment and the continued search for relationship with Creation — namely, the Creator himself.

I would define all art to be a form of communication, either with the self or with others. Through that art, a message is spoken. It is a fluid and versatile expression because that message moves through different circuits. There is the message the artist desires to convey, the message that is transmitted into the physical medium, and the message the audience (sometimes the artists again) receives during and after its creation. I am also a firm believer as a lover of art and as a Catholic that all art also holds a certain amount of the transcendentals: truth, goodness and beauty.

It is so easy to give up the struggle of living virtuously, and our individualistic world offers many temptations: wealth, fame, power. The devil is a sneaky creature and will use whatever he can — even what we perceive to be good — to persuade us to deny Christ. What we as members of the modern world must do is strive for charity in all things.

So far, my siblings and I have found a great deal of truth in the movies we've watched together and the tea party discussions we've had in between. I hope and pray that these powerful giants in our modern world and on the silver screen will continue to promote love in all its goodness and beauty.

Arts and Media | Art and the closet Catholic: princess edition

The heart of love, a shepherd

As the insects, like the swans: Living the vow of obedience with a free spirit

Vulnerable as a rock