In India, hunger may kill migrant laborers before COVID-19 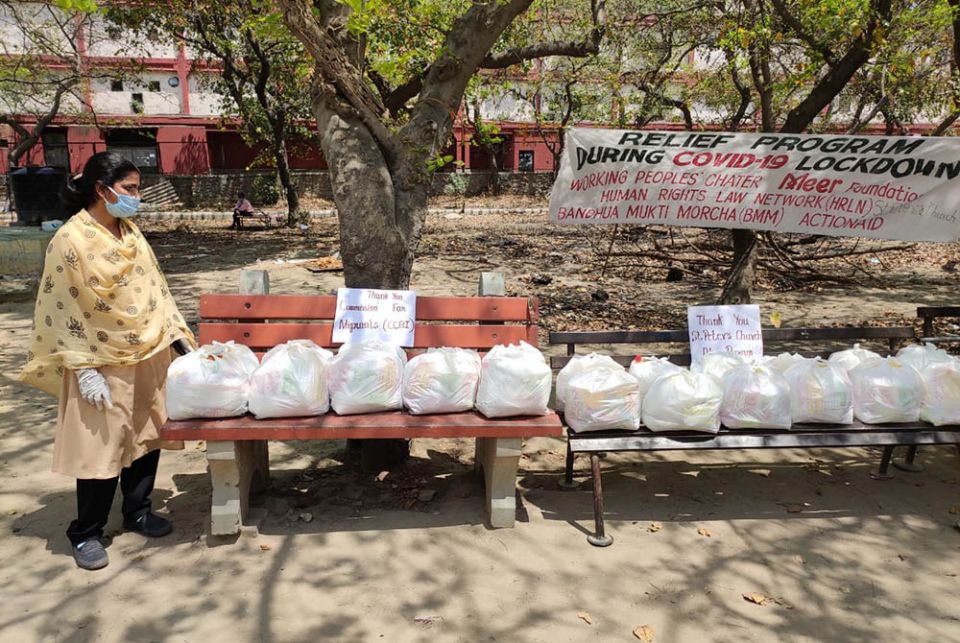 Sr. Rani Punnaserril, a member of the Sisters of the Holy Cross, with food packages for migrant workers (Provided photo)

While working with Catholic Bishops' Conference of India Office for Labor, I came to know closely the problems and issues faced by migrant laborers. On March 14, I was appointed secretary to the Commission for Migrants, Northern Region of India. I took office when COVID-19 had already spread across the world.

In the wake of the global pandemic caused by COVID-19 and the ensuing lockdown in India and abroad, there has been a severe disruption in normal day-to-day activities.

On March 22, Narendra Modi, the prime minister of India, declared the lockdown beginning with a "Janta Curfew" (a self-imposed strike), followed by a series of four nationwide lockdown phases that ended May 31.

India's complete lockdown was unexpected and didn't have the proper preparation. The lockdown wreaked havoc in India due to unforeseen difficulties that unorganized workers faced.

Complete lockdown was shocking news for the daily waged migrant laborers, who could neither work nor reach their hometowns. I talked to some people about the possibility of reaching out to them, but they said, "Federal government declared the lockdown, so there is very little we can do."

The whole world watched helplessly the movements of migrants on foot, bicycles and trucks to reach their homelands. Laborers carried old men and women on shoulders along with their toddlers. They said, "Before we die, we want to be united with our family members." They had lost hope in the government.

Delhi witnessed a massive exodus of migrant laborers who were daily wage earners, living at the mercy of their employers or contractors. Many of them were living in the rented houses and slums. Due to unavailability of work and food, the laborers had only one option: to leave the cities. This made them flout the order of the government and start their journey towards home.

Social media covered the atrocities of the police against migrant laborers, who were walking towards the railway stations and bus stands anxiously to get back home. Some died of dehydration, while some died from accidents on the road and on the railway track.

Pradhan Mantri Garib Kalyan Yojna, a scheme for the welfare of the poor announced by the prime minister of India in 2016, was once again accentuated with honey in it. PM India, the web portal of the government, declared on March 28 that Pradhan Mantri Garib Kalyan Yojna was extended to the festivals of Deepawali and Chhath Puja, or till the end of November 2020. The scheme is to provide 5 kilograms (about 11 pounds) of free wheat/rice to more than 80 crore (ten million) people — to each member of a family — along with 1 kilogram (2.2 pounds) of free whole gram, per month. While being with these migrants, I had noticed that the majority of them do not have the proof of identity to avail the schemes announced for them.

According to the 2019-2020 report published by the Ministry of Labour and Employment. "The workers in the unorganized sector constitute more than 90 percent of the total employment in the country. A large number of unorganized workers are home based." This shows the reality of India, and all these workers suffered damage due to the pandemic lockdown. 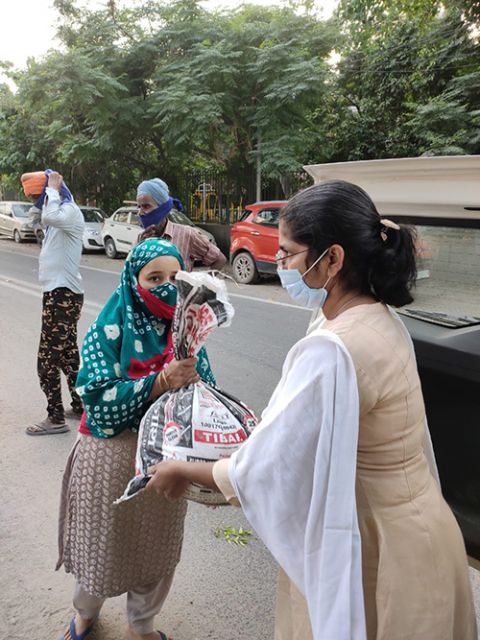 A few taxi and auto-rickshaw drivers asked me in their colloquial language, "What is this all about corona and COVID?" They were not getting commuters and were anxious about paying back loans taken for their vehicles. The venders, domestic workers, constructions workers and all those who make a living doing informal work contribute to the economy of the country. Without their labor, India cannot develop.

It is an irony that those whose hands built the cities and metros became homeless overnight, and they were leaving towards their hometowns. No employers stopped them from leaving the cities, because no employer owns them as their workers. Migrant laborers stood hours to get a piece of food. The process of unlocking the lockdown has started, but those who can't afford jobs are still hungry.

Many people with lower income or no income could not grasp either the effect of COVID-19 or the intention of the government. Awareness was raised at such a snail's pace that people lost faith in the promises of the prime minister. It was horrifying to watch videos of migrants gathered in the hundreds and thousands at the city railway stations like Mumbai and Delhi. Delhi still witnesses many more informal workers who are starving in different labor camps and slums.

The cry of the poor workers moved the heart of many philanthropists. The different organizations and associations, including the church, came together to help those who have lost jobs and are unable to sustain their families.

The issues of the migrants moved me to stand up with them. I could not keep away from reaching out to these voiceless masses. Those with only a hand-to-mouth existence were clueless about what to do and how to do it. I had approached Anil Couto, the archbishop of Delhi (and chairman of the Commission for Migrants, North Region India). He said, "Whatever possible we shall do." He assured his support and encouraged me to help them.

My provincial, Sr. Mary Paul Kunnemuriyil, permitted me to go ahead with relief service, and even contributed money to get rations for the migrant laborers. Her words encouraged me to go ahead and collaborate with other organizations to meet the immediate need of the migrants.

Delhi has the second largest migrant population in India, and many organizations are reaching out to them. Fr. John Britto, the director of Chetanalaya, the Diocesan Social Service Centre of the Delhi Archdiocese, was the first person I approached for help for three families who polish boots for a living.

Rajesh, a migrant, had asked me for food. He was so emotional that he could not even speak. He said, "My children are crying for food. I have nothing to give them. Police are chasing us away if we go to the road to collect something to eat." I asked Britto for help. He helped me to coordinate with a parish to give food materials to Rajesh; this was more than preaching to a non-Christian the good news of Christ. 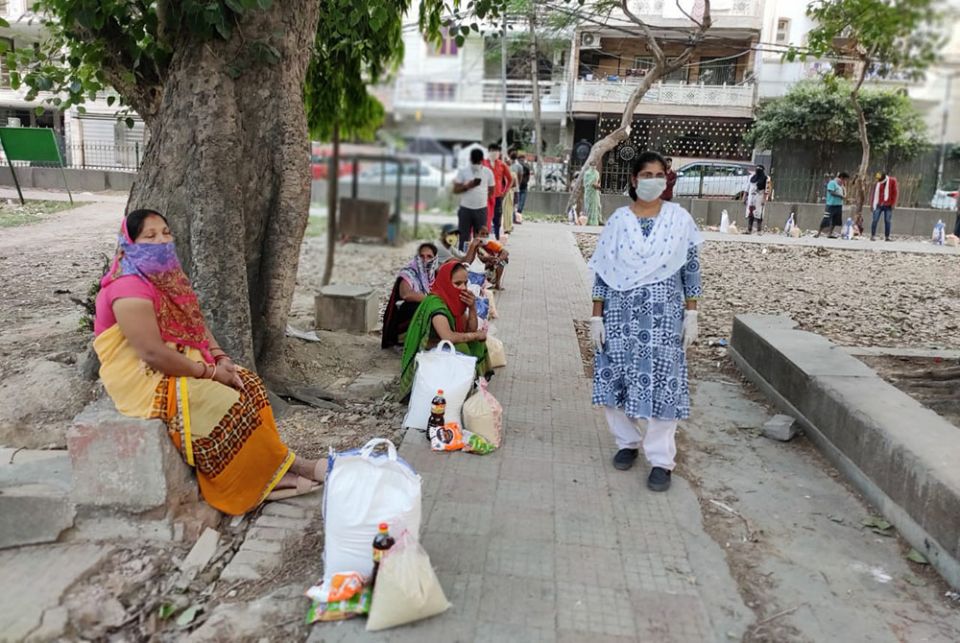 As I continued to receive requests, I started networking with the Working Peoples' Charter, an association of Civil Society Organizations working for the unorganized workers and migrant laborers. Reaching out to different labor camps was difficult because of lockdown, but our team has been managing. The starving population is beyond our imagination and our contribution is only a drop in the ocean.

Nirmal Gorana, a social worker with whom I collaborate, showed me a huge list of unorganized migrant laborers in Faridabad in the state of Haryana on the border of Delhi, who had no ration cards. He said, "If we do not intervene, they may die of hunger."

Just in one region of Delhi we had identified 5,000 migrant laborers without ration cards; there are several thousand people like this in different pockets of Delhi. So, I appealed to the Conference of Catholic Bishops in India's Commission for Migrants, and the Distress Management Collective, and we received immediate assistance for food kits. We served cooked food and food kits to migrants and at the refugee camps.

Justice Kurian Joseph, a retired Supreme Court Judge and a patron of the Distress Management Collective, helped us through his networks with funds for food kits. Providentially, once I started to help these brethren, other benefactors too came forth: parishioners, Sisters of the Holy Cross, the Distress Management Collective, and the Board for Research Education and Development (run by the Indian Missionary Society priests).

Each day when I returned home, I was heavy-hearted for those who did not have a meal that day. I am sure if civil society organizations and religious organizations like the Catholic Church had not come out to feed these hungry brothers and sisters, they would have starved to death.

Many migrant laborers said, "Perhaps we may not die of coronavirus, but we may die of hunger." I am afraid that would be true, if we stop going out to distribute cooked food or food kits to these needy people. They will not exist to build our mansions, care for the farms, and produce clothes.

India has several legislations for the workers' welfare, but it has become toothless as the state governments do not implement them. Had they implemented "The Interstate Migrant Workmen Act, 1979," the migrants would not have suffered so much damage. This piece of legislation assures them all the benefits they ought to get.

I am encouraged by my community in Delhi and others who appreciate my reaching out to the migrant workers. And I appreciate the proactive steps taken by the Delhi Archdiocese and its religious congregations. Fortunately, I have a good network of like-minded people engaged in this mission.

As a lawyer, I stand for justice and protection of human rights; I am motivated by our Foundress Mother Bernarda Heimgartner, who followed the spirit of the Cross; I am empowered by the motto of the congregation: "The need of the time is the will of God."

Being a Holy Cross Sister, I find it meaningful to risk my life to save many from dying of hunger and disease. This is the time to give Christ to hungry people by feeding the five thousand; the bread is multiplied through us when we gather it together to share it.

[Rani Punnaserril is a member of the Sisters of the Holy Cross, Menzingen. Her early ministry was in social work, but based on that experience she became a lawyer, practicing in the lower courts and in the Supreme Court of India. After two terms working for the Catholic Bishops' Conference of India as labor program manager in the Office for Labor, she was asked by the Delhi Archdiocese to work for the region as secretary of North Region's Commission for Migrants, for the Catholic Bishops' Conference of India.]

Coronavirus | In India, hunger may kill migrant laborers before COVID-19

Visualizing our portal into the future