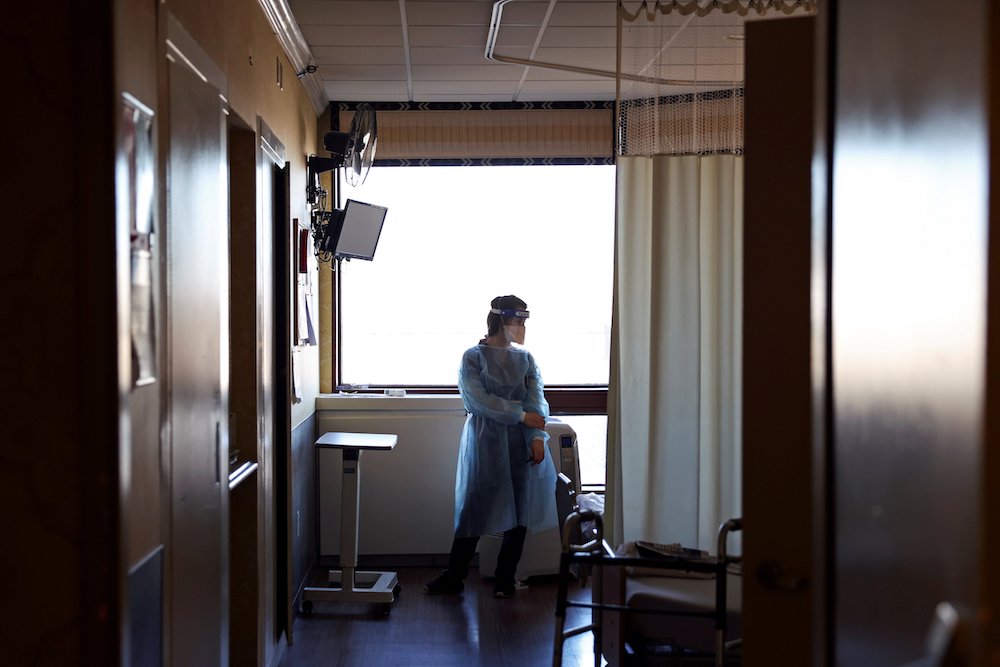 A Walgreens pharmacist prepares the Pfizer-BioNTech coronavirus vaccine at Hamilton Park Nursing and Rehabilitation in the Brooklyn borough of New York City on Jan. 4. (CNS/Reuters/Yuki Iwamura)

Because the vast majority of women religious in the United States are over the age of 70 and many live in large groups in close quarters, when sisters will get the coronavirus vaccine may be a matter of life and death. But the timing of their vaccinations depends on where they live.

States, not a federal agency, are handling vaccine distribution, so there will likely be different rules and procedures in each of them. This means a convent in Brooklyn in New York City could fall under one set of rules while a community just across the river in New Jersey could be under another. One in Philadelphia, less than two hours away, could be under a third.

But the differences are likely to be minor, said Brian Kane, senior director of ethics at the Catholic Health Association and the organization's point person on the vaccine.

"Nationally, there's a great deal of consensus on how to do it," Kane said. "Sisters are probably high up on the list. First is health care workers, of course, but then, basically, it's people at higher risk of catching it, and certainly, advanced age and whatever health conditions they have would be factors."

The first vaccinations in the United States began in December; WebMD has compiled links to how each state is distributing them.

Sr. Kathleen Ann Kolb knows firsthand the challenge of different rules in different states. Kolb is the health and wellness coordinator for the Sisters of Mercy in the New York and Pennsylvania areas. She has seen not only differences between states, but differences within Pennsylvania itself.

In Erie, officials appear to be putting sister communities in the second group to get vaccines after health care workers and those in long-term care facilities, while in Pittsburgh, they're in the first group of those most at-risk.

"It's happening differently in each area," Kolb said.

Those differences, however, are relatively minor, and she's not concerned that the congregation's living centers, where most of their elderly sisters live, will be forgotten. But she is a little worried about older sisters who do not live in large group settings.

"I do think from listening to the news, they're not on target for where they thought they would be" in distributing vaccines, Kolb said. "But this is no easy task."

The biggest problem, she said, seems to be a nationwide shortage of health care workers to do the vaccinations. 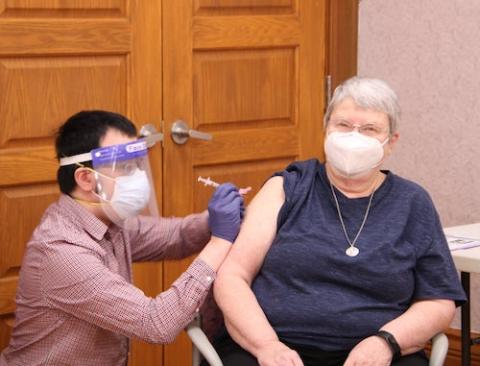 "Part of the reason for that is we have so many health care workers trying to keep people well or caring for those infected with the virus," Kolb said. "There are also complications, like some nurses can't volunteer to help because their kids aren't in school."

Sr. Michelle Woodruff told Global Sisters Report she has seen a similar issue in her role as a public health nurse at the Crownpoint Health Care Facility, about two hours northwest of Albuquerque, New Mexico. The clinic is part of the Indian Health Service, the federal health program for American Indians and Alaska Natives; Woodruff, of the Adorers of the Blood of Christ, is one of the sisters ministering to the Navajo Nation.

And the challenge of having enough health care workers to vaccinate people is doubling: All the vaccines approved so far require a second dose after either 21 or 28 days, meaning first doses will have to stop temporarily while second doses are administered.

"Or we somehow do 200%, and that's not really possible," Woodruff said. "I don't know where they thought they would get the people to do this."

While many convents resemble nursing homes but are not licensed as care facilities, Kane said it's unlikely licensing will be a factor in when vaccines would be made available.

"It would have more to do with the individuals and their circumstances," he said.

That's also the case on the reservation, Woodruff said, where the Navajo Nation has included spiritual leaders on its list of essential workers, meaning anyone ministering to the Navajo Nation's residents, including church pastors and traditional healers, will be near the top of the list to be vaccinated. 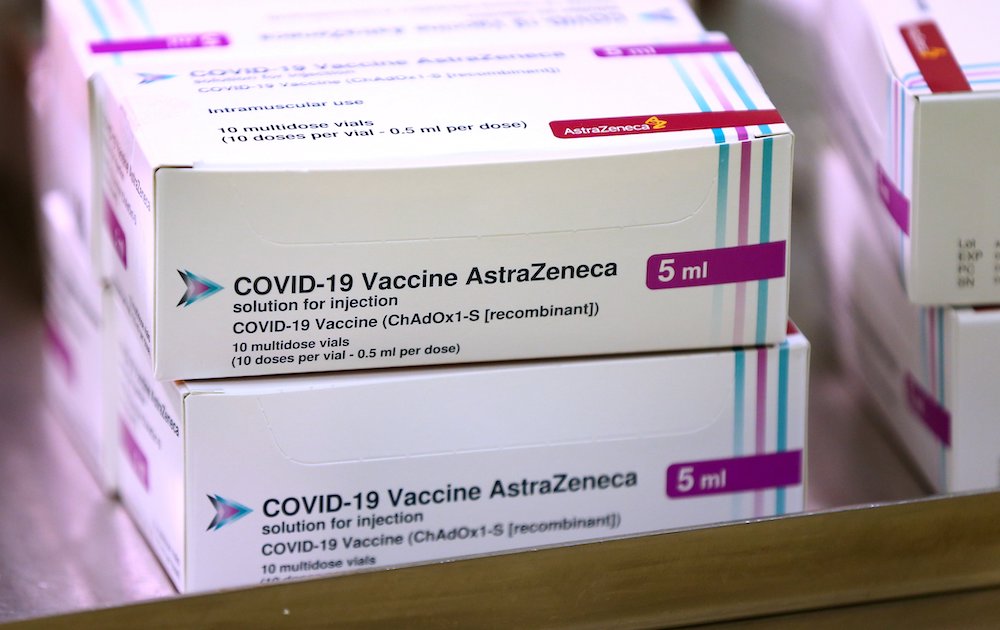 Boxes of the Oxford University/AstraZeneca COVID-19 vaccine are seen at the Princess Royal Hospital in Haywards Heath, England, on Jan. 2. (CNS/Reuters pool/Gareth Fuller)

A major concern of sisters is that vulnerable and often neglected populations may be overlooked when it comes to vaccinations against COVID-19.

Kane said rural areas, which already suffer from a lack of health care, may have a more difficult time with distribution because the vaccines must be stored at intensely cold temperatures, requiring special freezers. One of the two vaccines approved for use in the United States must be kept at -94 degrees Fahrenheit, while the other can be stored at -4 degrees.

Woodruff said the vaccines come in special boxes that keep them at the correct temperature, but there are complications created by how much vaccine is in a bottle, for example.

"They're only shipping what we need in that timeframe," she said. "But there are times when you get to the end of the day, and you have one or two doses left, so you're calling around, trying to get them used up."

Kolb said she has not yet seen any instances of vulnerable populations being ignored.

"I do believe there's great sincerity and commitment to take care of the most vulnerable and get the vaccines out to them," she said.

Another concern is that people will be reluctant to get vaccinated, especially populations that have been abused by medical studies and practices in the past: For example, in a 40-year experiment by the U.S. Public Health Service in Tuskegee, Alabama, researchers lied to Black men, claiming they were treating them for syphilis but instead studying how they died from the disease, and thousands of nonwhite women, including Puerto Rican, Native American and Mexican American women, were forcibly or unknowingly sterilized from the 1930s to the 1970s.

"They have every right to be concerned and hesitant," Woodruff said. "But we have people asking every day, 'When can I get my vaccine?' People have a real understanding of what this is." 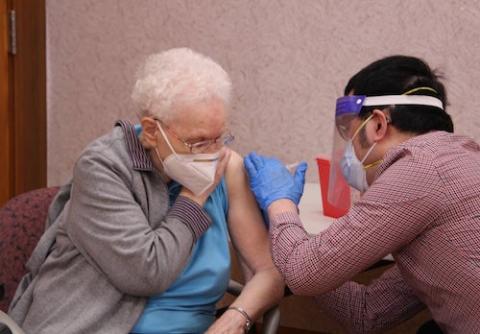 "They're suspicious about medicine and vaccines, and will they present themselves to take it? But I was part of a discussion [in December] on a federal level, and federal officials were aware of those things and working to make sure the messaging is effective."

There has also been confusion around whether the vaccines are morally acceptable because research to create them was done on cell lines derived from tissues from fetuses aborted decades ago. However, the Vatican has repeatedly said being vaccinated is not only acceptable, but promotes the common good in stopping the virus.

"I have no qualms about taking it," Kane said.