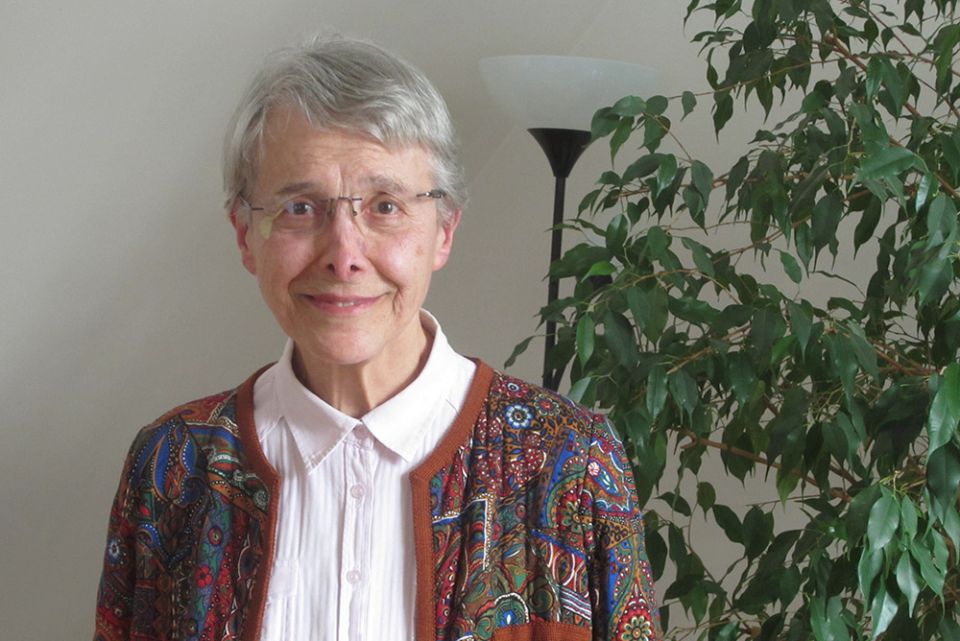 Paris — The two strict lockdowns imposed in France, first in the spring then in the fall, hit everyone in the country. Nobody could venture farther than a radius of 1 km (0.62 miles) from home. Churches and other public venues were closed, and parishioners stayed home on Sundays.

Like many women's religious communities, the Soeurs Auxiliatrices des Âmes du Purgatoire (Society of Helpers), a congregation of Ignatian spirituality present in 22 countries, could not attend Mass on Sundays. They decided to be creative and organize their own celebrations of the Word.

Sr. Christiane Hourticq taught theological anthropology at the Institut Catholique de Paris. She had responsibilities in her congregation as superior of the Province of France and as general councilor at the international level. She told Global Sisters Report how the pandemic gives the Catholic Church an opportunity to adapt to today's world.

GSR: How has the pandemic changed the life of the communities of women religious?

Hourticq: The liturgical life of religious women's communities has profoundly changed. Taking part in a eucharistic celebration had become impossible. Even in some places where it could have been possible, some sisters decided not to attend the celebration of Mass as a sign of solidarity with laypeople. 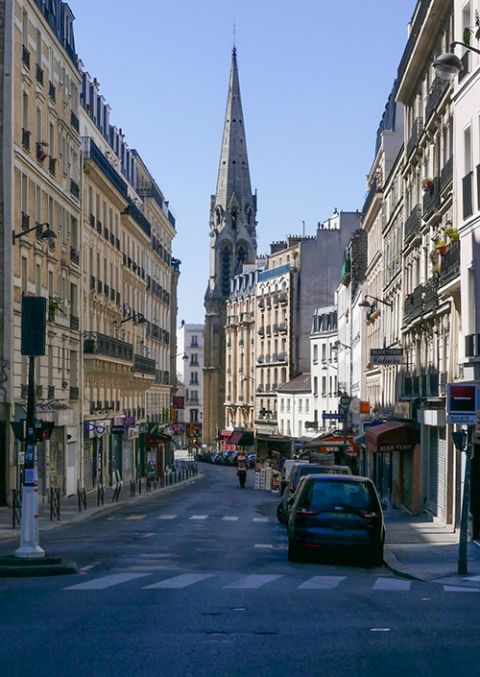 An empty street is seen in Paris under COVID-19 lockdown in April 2020. (Wikimedia Commons/Jeanne Menjoulet)

For our community, our liturgical life had to take another form. We chose to be creative and have a celebration of the Word every Sunday.

This was a favorable time: Usually, we do not have Sunday Mass together. Since all of us, 25 sisters living in the motherhouse of our congregation, were confined, we could pray together. Our chapel is large enough to allow us to be together while maintaining social distancing. Each celebration was prepared by a group of about five people. The whole assembly took part in it: Readings, homily and prayers of intercessions were said by several different people.

I can tell you, as an example, how we celebrated the third Sunday of Easter last April, during the first period of confinement. The superior general and her four councilors prepared the celebration of that Sunday, when the Gospel is the episode of the pilgrims to Emmaus (Luke 24:13-35).

The superior general opened the celebration by welcoming the participants to the word of God. After invoking God's mercy and singing the Kyrie, we followed the liturgical indications given by the church for the first part of the Mass. The reading of the Gospel was particularly emphasized.

The reader took several breaks. After every paragraph, a sister brought a basket and put it in front of the altar. The first contained our prayer intentions; the second evoked our broken hopes, echoing the despair expressed by the disciples on the way. The third contained the book of the word of God. In the fourth were five loaves of bread made by one of our sisters.

After the reading of the Gospel was completed, a sister played a piece of music. We are lucky to have gifted musicians in our community. Then we recited the creed.

What innovations did you bring to the celebration?

In the Gospel of the disciples of Emmaus, Jesus disappears in the eyes of the disciples. But he leaves them his gesture of breaking bread. We reproduced this gesture. The superior general broke the loaves of bread and placed the pieces in baskets while our assembly took the time for a universal prayer, punctuated by the refrain: "Stay with us, Lord Jesus." We asked for the grace to become broken bread and spoke about the needs of those to whom we are sent.

Our assembly ended with the recitation of the Lord's Prayer and a final prayer. Before leaving, we asked for God's blessing, and then the superior general and her councilors distributed the broken bread.

Didn't you follow the usual liturgy of the Mass?

Such a celebration is not a Mass, but in this case, it unfolded like one, with stress put on the first part of Mass, the readings especially. But we carefully avoided mimicking the second part of the Mass with the consecration. There was no one at the altar, but someone was presiding over the celebration; in the example I gave, it was the superior general. Our service lasted for an hour, like any Mass.

In a sense, yes, it is like a Protestant service! There are a number of points that Luther was right about, especially about the importance of having a living relationship to God's word. As far as the Bible is concerned, I am heavily indebted to Protestant scholars and theologians.

Could this kind of celebration become a new way of praying on Sunday, since there are fewer and fewer priests?

Clearly, the eucharistic celebration of Sunday the way it has been since the Middle Ages is no longer adjusted to today's situation. Christians do not gather together according to their territorial proximity anymore, and priests wear themselves out driving miles to celebrate Masses in scattered churches where there are fewer and fewer faithful.

People communicate in a different way today, and we have to take this into account. What does it mean today to preside over a eucharistic celebration? Let's look at the tradition: We see that during his missionary journeys, St. Paul founded a great number of communities. After announcing to them the good news of the Gospel, he entrusted an elder with the task of watching over the community. It was only in the second and third centuries that the distinction between clerics and laypeople became clearer and then stricter.

When did this change?

In order to counter the Reformation, the Council of Trent (1545-63) developed a theology of the priesthood that, by insisting on the sacredness of the person of the priest, encouraged clericalism. It reinforced the divide between clerics and laypeople, giving the priest the lead of the community.

The relationship between the community and the priest was reversed. The community should come first. The priest is sent to maintain its unity and ensure communion with the other communities. It is in this capacity that he presides at the Eucharist. Today, Mass is organized according to the priest, and the community is a gathering of people who only have in common to come to that Mass at that time. 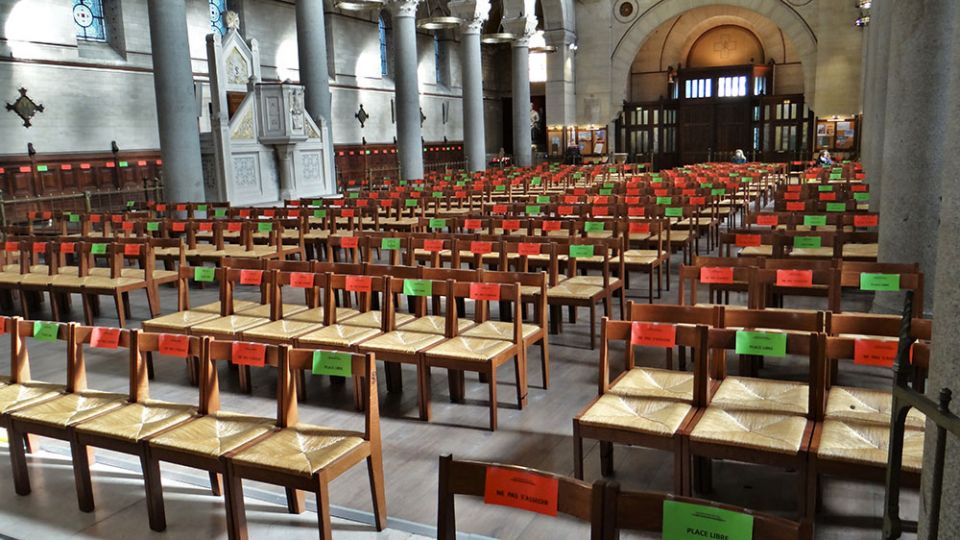 Seats are marked for social distancing in the Church of Saint-Pierre de Montrouge in Paris during the coronavirus pandemic in May 2020. (Wikimedia Commons/Ibex73)

How do you see new kinds of celebrations?

We have to consider first the reality in France today: The vitality of Christian communities is very real. They are very diversified and more and more numerous. From this point of view, the two lockdowns had a positive effect. Older people have learned to communicate through the internet and can now exchange views on themes they are interested in. Bible study groups, retreats, spiritual itineraries organized by parishes or religious institutes are multiplying.

They meet with real success, favored by a healthy context that calls for reflection and obliges us to live at a different pace. The experience of these communities will shed light on the question of presiding at the Eucharist. The synod on the Amazon opened the way.

When the churches were closed, Mass on TV became popular. What do you think of it?

Even before the pandemic, Mass on television had reached a fairly large audience. And now, after churches have reopened, some people are afraid to get contaminated by the virus if they take part in a big gathering. They prefer to stay home safe and watch Mass on TV.

During the lockdown, what we saw on TV was Mass celebrated in a studio with strict health instructions. The public became aware of a fact that was received as a shock: Mass is a matter for men, and women are excluded. This is likely to encourage the movement asking the church to give a better place to women.

When the health situation returns to normal, some of the people who have become used to watching Mass on television will not return to church, especially since they have gotten older.

Coronavirus | Q & A with Sr. Christiane Hourticq, on liturgical life under lockdown in France

Baptism is our call to care for water