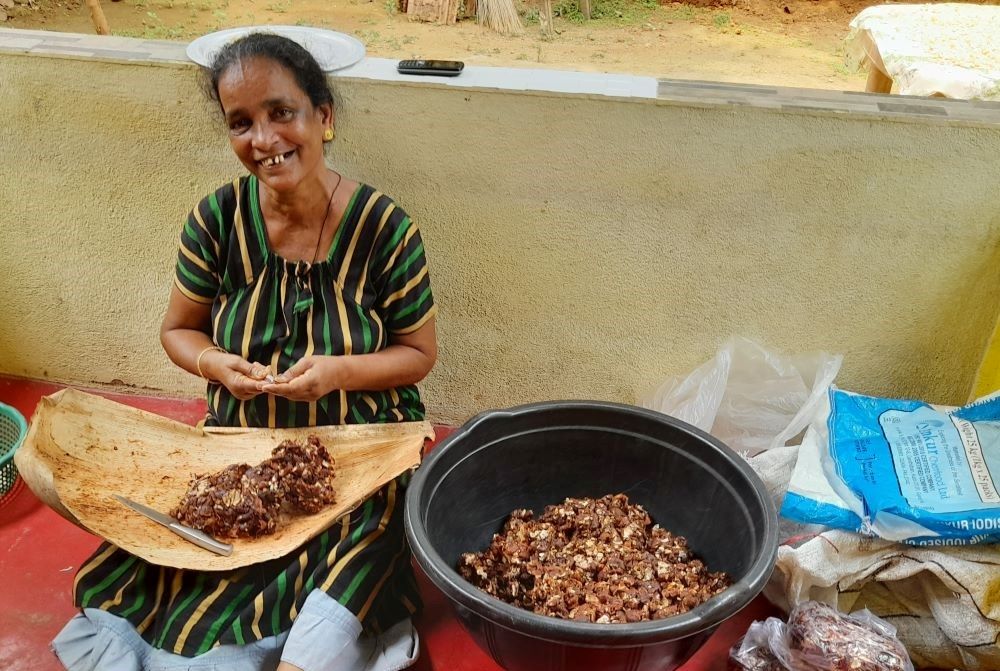 Lucy D'Souza was desperate. She lost her husband to cancer in 2020, and the pandemic took away her job as a housemaid. However, she managed to rebuild her life with what she says is "timely support" from some Catholic nuns.

"Today, I make my living by selling pickles in the local market," said the Catholic mother of two as she packed mango and pickled vegetables into small bottles.

D'Souza is among the more than 200 Christian, Hindu and Muslim women who through local self-help groups have taken up trades and self-employment projects to overcome pandemic trauma in Mangaluru, a port city in the southern Indian state of Karnataka. Another 200 women have done the same in Bengaluru, the state capital, some 220 miles east of Mangaluru.

They all are assisted by four congregations of women religious.

"People suffered a lot with no jobs, business or any means of livelihood during the COVID lockdowns," said Sr. Joel Lasrado, a member of the Missionary Sisters of the Queen of the Apostles who helped D'Souza start her business.

Other congregations that have helped people like D'Souza are the Sisters of the Little Flower of Bethany, Sisters of Charity of Sts. Bartolomea Capitanio and Vincenza Gerosa, and Sisters of St. Joseph of Tarbes. They were aided by the Functional Vocational Training and Research Society, a church-based organization that sponsored the project and provided technical support. 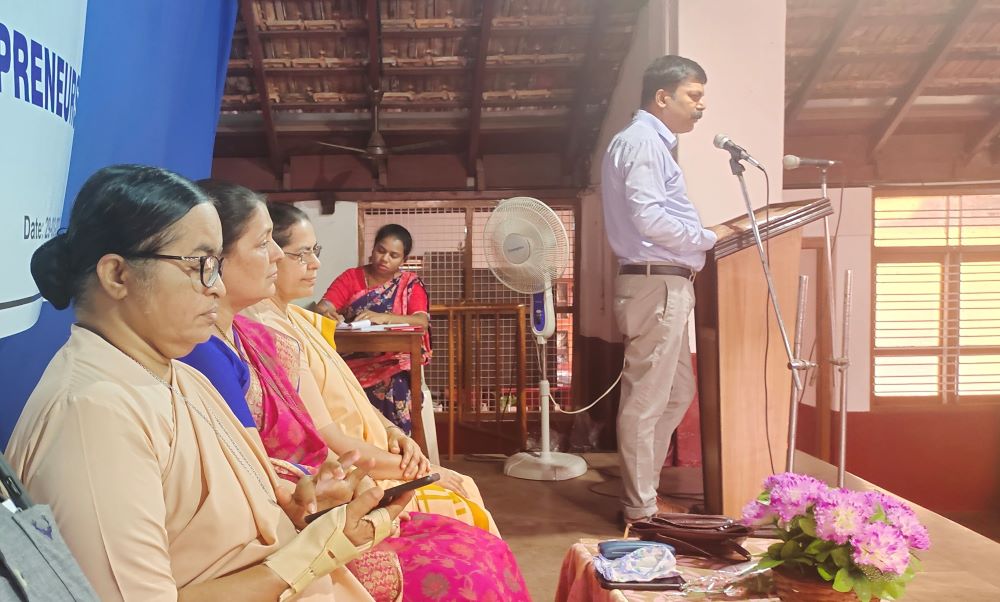 Felix D'Souza, director of the Functional Vocational Training and Research Society, addresses the opening ceremony of the pandemic-rebuilding project in Mangaluru, southern India, in March. Others in the dais are, from left, Charity Sr. Sylvia Fernandes; Jacintha Sequeira, former mayor of Mangaluru; and Sr. Cicilia Mendonca, provincial of the Bethany Sisters' Mangaluru province. (Thomas Scaria)

"We chose to work with Catholic nuns for this project because they had been already involved in helping people through self-help groups," said Jimmy Mathew, the society's regional manager.

Mathew said the goal of his organization is promoting female entrepreneurship to support families that suffered under the pandemic.

"Our main focus is to empower the unorganized sector with skills training so that they can either get employed or start a project on their own," he told Global Sisters Report.

The Functional Vocational Training and Research Society conducted a "training for trainers" program in March for the nuns' social centers and their staff members. It also provides female entrepreneurs 12,000 rupees (about $150) each and skills training in various trades, such as tailoring and pickling.

The organization also teaches the women entrepreneurship, finance management, how to prepare project proposals, and marketing strategies. Clara D'Cunha, a laywoman who coordinates the project in the Mangaluru region, said these trainings are an ongoing process with review meetings every quarter.

Charity Sr. Sylvia Fernandes, who chaired the March meeting, explained the need to shift the focus from traditional charity to empowerment.

"Women have to be empowered to sustain their families," said the nun, whose congregation manages more than 50 self-help groups for female empowerment and has prepared 75 female entrepreneurs so far through her organization, Spandana ("Response").

Lasrado, who heads Dharma Jyothi ("Light of Righteousness"), the social service wing of her congregation, said the four congregations were already working for women's empowerment, but the pandemic and lockdowns put their mission in jeopardy. The timely help from Mathew's organization really boosted their confidence, she added. 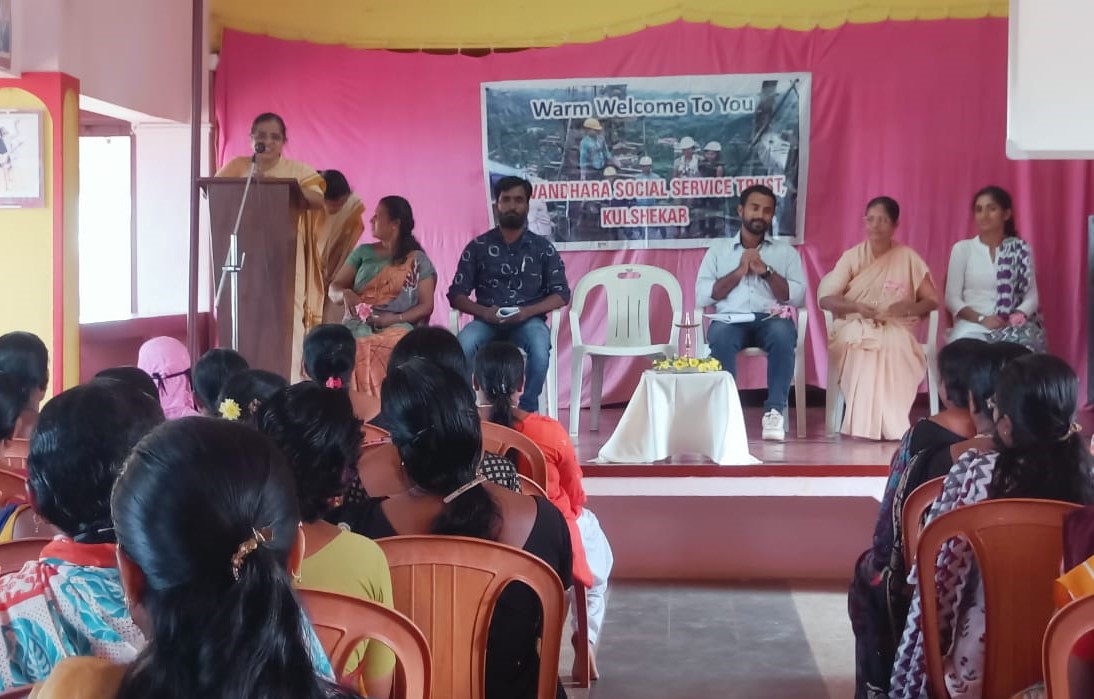 Confidence, dignity and a way to make a living

After the March training, Lasrado said, each congregation took up the task of training their self-help group members in various trades.

D'Souza, a member of Lasrado's self-help group, sounded confident as she narrated her success story to GSR from her tiny but neat Mangaluru home, where a wall bears a picture of Mother Mary, a rosary and a photo of her late husband.

She says her pickles are in high demand now. Offering a spoon with a sample to taste, she said, "Tell others if you like it."

The Sisters of the Little Flower of Bethany, popularly known as Bethany Sisters, manage two organizations for the empowerment of rural women, Jeevandhara ("Life Stream") and Sahodaya ("Rising Together"). The organizations bring women together under the self-help groups and provide credit facilities to start new businesses or trades.

Bethany Sister Ann Maria, who heads her congregation's project that has helped some 100 entrepreneurs recover from the lockdown and is secretary for the two organizations, said they cover mostly migrant laborers and construction workers under the self-help and entrepreneurship program.

"The self-help programs act as a great support to each other, helping their financial growth as well as instilling in them confidence and dignity," Sister Ann Maria said.

Most religious congregations and church centers in India use self-help groups as a platform for people's development, she said. Some self-help group members have started small household businesses; others have opened vegetable shops, tailoring units, beauty parlors, food or meat stalls, or tea shops.

Sister Ann Maria said people who had lost all means of livelihood because of the pandemic found a silver lining in the nuns' initiative. Those living in poverty, especially Hindu migrant laborers, were in "utter chaos" during the lockdowns, she said.

"We could do nothing except to distribute some food kits or arrange short-stay facilities for migrant laborers," she said. "We are happy we could aid them to help themselves through this rebuilding program."

One of them, Lavina D'Cunha, owns a food factory that employs some 20 local women, mostly Hindus. The 9-year-old sweets factory hardly functioned during the pandemic, leaving its employees in the lurch.

"When my business closed, my female staff starved. But today, they are back here," said D'Cunha, a Catholic, as she introduced her staff and explained the process of sweet making.

Most staff members in D'Cunha's factory are part of the self-help groups promoted by the Catholic nuns. Some shared with GSR tales of rebuilding their lives by working together in the factory.

One of them, Chandrika Naik, a Hindu, said she worked with D'Cunha from the beginning of the factory.

"We make special sweets that are in high demand at Hindu weddings," she said.

D'Cunha has belonged for 15 years to a self-help group in her village run by nuns and said they were her motivation to start the business.

"Since my staff members are also self-help group members, I don't treat them as employees, but co-workers," the factory owner said.

The Bethany Sisters' self-help group meets the first Tuesday of the month to discuss their progress and challenges, promote savings, and review credit details and loans.

D'Cunha said the Bethany Sisters helped them organize as a group.

"So we grow together, supporting each other and enjoying a multireligious unity here," she said.

She said her sweets business began to look up when the number of weddings increased as lockdowns were lifted, and the nuns and Mathew's society helped them restart.

Triveni Raj, a Hindu woman who runs a small shop adjacent to her home, said she feels more dignified and confident when she manages her business. Her neighbor Geetha has a tailor shop in the same village, while Kamala runs a tea shop and Vijayalakshmi, a fancy shop that sells jewelry and beauty products. All received seed money and training from the nuns.

Sister Ann Maria, who started the self-help group for them, said the women have become empowered and self-reliant, especially after they received rebuilding support from Mathew's society. 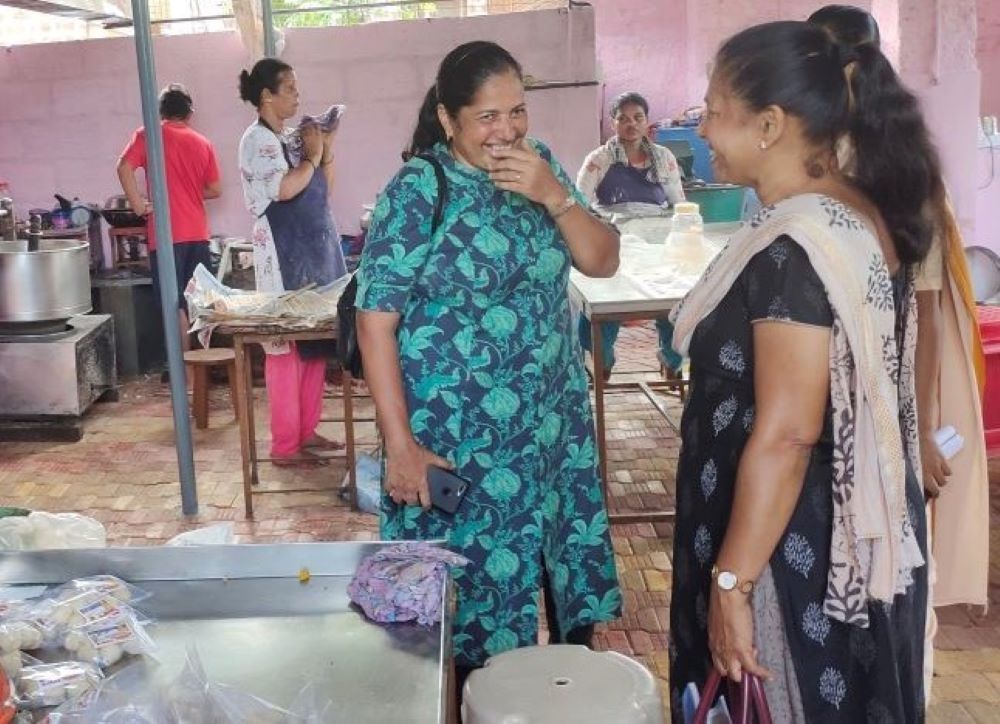 In Bengaluru, the Sisters of St. Joseph of Tarbes have sponsored the business ideas of more than 200 slum women so far.

Tarbes Sister Mariamma said most of these women have dropped out of school.

"The women living on the outskirts of Bengaluru have also started developing business plans under this project," said the nun.

The Tarbes Sisters also manage a center for women in crisis where women receive shelter, training, treatment and care.

Sister Mariamma said promoting entrepreneurship among the slum women was a "big challenge," as most of them had less education and shared some post-traumatic stress disorders from sexual exploitation, torture, harassment, and drug addiction, mostly at young ages.

"However, we have used this opportunity to instill more courage, skills and competency among them during the rebuilding projects," she said.