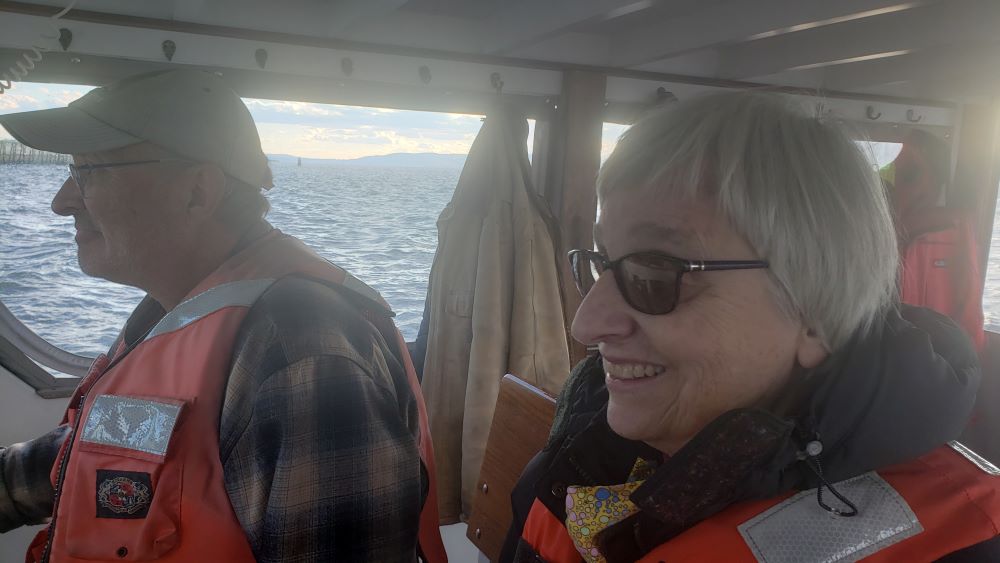 Accompanying GSR correspondent Chris Herlinger on a trip on the Hudson River in mid-November was Sister of Charity Carol De Angelo, right, and John Lipscomb, a boat captain and the vice president of advocacy for the environmental watchdog group Riverkeeper. (Chris Herlinger)

I've never been much for New Year’s resolutions, though there is one I am confident I can keep — maintain my growing relationship with the Hudson River Valley.

That relationship grew out of a year of environmental reporting for GSR on issues like sister congregational property, land easements and sister-led farms. At the center of this work was time spent in a glorious treasure of river and hills, farms and tributaries.

The Hudson River Valley is a mostly serene landscape that those not familiar with New York may be surprised to learn is not far at all from the often-riotous life of New York City: You can be in the river valley in less than a half hour by train.

These wonderful assignments all happened "on land" — near the river, not on it. But I was always aware of the Hudson River's place at the center of the valley. So I was determined to experience the waterway itself — that huge, 300-mile expanse that flows from the Adirondack Mountains in northern New York state all the way south to New York Harbor, eventually connecting with the Atlantic Ocean.

In mid-November, I got my wish, joining Sister of Charity Carol De Angelo and John Lipscomb, a boat captain and the vice president of advocacy for the environmental watchdog group Riverkeeper, on a three-hour afternoon trip exploring areas not far from Ossining, about 40 miles north of the city.

It was a glorious, bracing sunny afternoon with few clouds in the sky — and thankfully not as cold or windy as we had been expecting — as we struck out toward the Croton Point and Haverstraw Bay areas.

Autumn came late to New York state last year, and there were still traces of some fall color along the river. Shoreline, autumnal blue sky and the water were perfectly aligned that afternoon.

Not surprisingly, both De Angelo and Lipscomb proved to be wise and astute guides.

Throughout my reporting about the Hudson River Valley, De Angelo, director of the Office of Peace, Justice and Integrity of Creation for the Sisters of Charity of New York, had been immeasurably helpful in explaining the role sisters have played in advocacy efforts to protect the Hudson, particularly through a coalition called Religious Organizations Along the River, or ROAR.

As for Lipscomb, "John worships at the river," De Angelo said. Lipscomb, who describes himself as not particularly religious in the formal sense, admires the commitment Pope Francis and other Catholics have shown to environmental concerns. 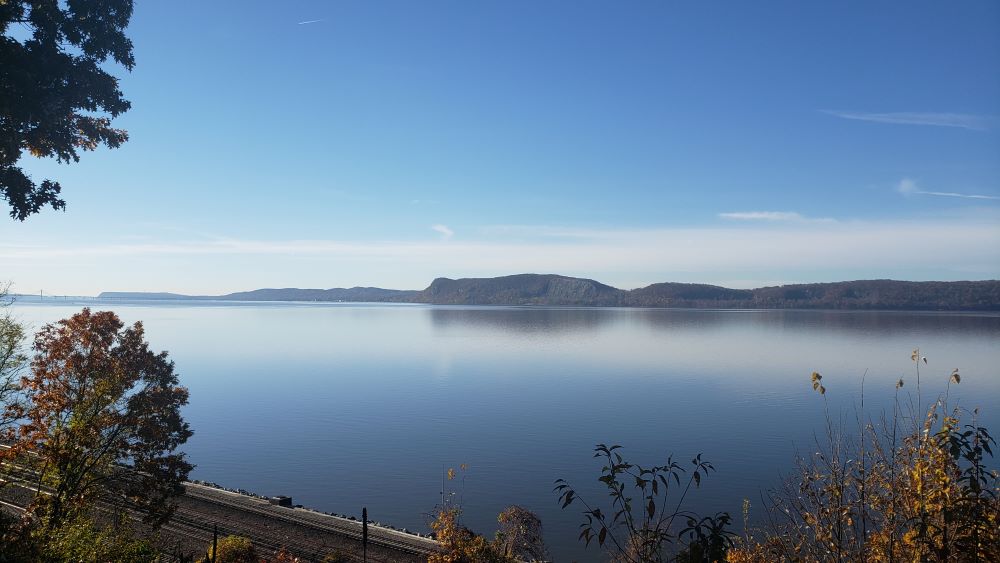 The Hudson River, seen here from Ossining, New York, is a 300-mile expanse that flows from the Adirondack Mountains in northern New York state all the way south to New York Harbor, eventually connecting with the Atlantic Ocean. (Chris Herlinger)

Lipscomb was quick to praise ROAR and sisters like De Angelo. "You don’t have to explain to Carol or her colleagues about the importance of the river," Lipscomb said as he guided the Riverkeeper craft through some mild chop. "They feel it. They understand it."

That affinity was evident throughout the afternoon: Both guides reflected on the need to protect a body of water that is a very real, living thing. "This river is a machine of life," Lipscomb said. "It's a gigantic engine of life."

"We need to listen to the Hudson, a precious and sacred being in our midst," De Angelo said.

Sacred being, yes. But perhaps also approachable as a friend.

"It's about taking care of a living friend," Lipscomb added — a friend that is very ecologically complex. Much of the river — the lower half — is actually an estuary, and there is a "constant fight," Lipscomb said, between the salt water of the ocean flowing north and the fresh water of the river flowing south.

As our craft moved steadily in the water, Lipscomb noted that the Hudson is not a "clear river," which is good because if it were clear, the river would be dead, shorn of organic matter.

"What you see is sediment," along with algae and plankton, he said.* "That's a good thing."

Indeed it is. Lipscomb's "friend" is doing much better than it was when Riverkeeper was founded back in 1966. As the group notes in an online history, the Hudson "was dying from pollution and neglect. Run-down factories choked it with hazardous waste, poisoning fish, threatening drinking water supplies, and ruining world-class havens for boating and swimming. Sadly, America's 'First River' had become little more than an industrial sewer."

In the background: the river's relationship to the largest city in the United States, which in the 19th and much of the 20th centuries was an industrial powerhouse and port. "In being next to a very rich city and an economic power, the river has paid a terrible price," Lipscomb said.

Through advocacy — persistent advocacy — by Riverkeeper, ROAR and other groups, and the enforcement and toughening of environmental laws, the Hudson is doing better. "Today, pollution levels are down, and swimming and boating are back," Riverkeeper notes, though underlining that "the Hudson's recovery is still fragile, still incomplete. Some fish species have not recovered, and many remain too toxic to eat; pollution levels spike with every rainfall."

"We're not done," Lipscomb said over the steady roar of the ship's engine. Yes, he said, "we've come a long way." But he cautioned against feeling satisfied or settled by any accomplishments. 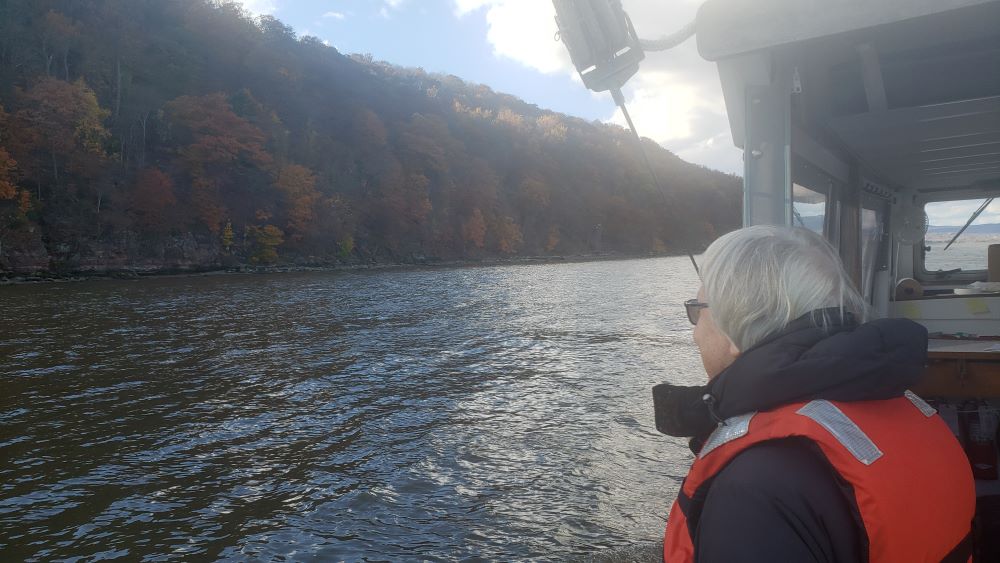 Sr. Carol De Angelo, director of the Office of Peace, Justice and Integrity of Creation for the Sisters of Charity of New York has been active in advocacy efforts to protect the Hudson River, particularly through a coalition called Religious Organizations Along the River, or ROAR. She is seen here on the west shoreline of the river. (Chris Herlinger)

Vigilance — like monitoring the river from the Riverkeeper patrol boat — is still needed. Lipscomb believes that river defenders must be prepared for the next phase of environmental activism — arguing that nature itself should have legal rights like people do.

"The river is not a 'natural resource,' " Lipscomb said, speaking with real passion. "It's a river and it has been damaged by human use." He paused. "The word 'resource' means something can be used, it suggests that the value of the thing is how it can be used. That's a problem. A real problem."

"I want to make changes the river can feel."

Power companies have exploited the river for decades, and while activists can point to victories like the 2021 closure of the Indian Point nuclear plant, there are constant proposals that, if implemented, could harm the Hudson River Valley ecosystem.

Just a few weeks after our journey, for example, Riverkeeper noted on its website that local communities are raising concerns about a proposed municipal solid waste processing facility in the town of Grand Gorge "less than 2,000 feet from the Schoharie Creek and Schoharie Reservoir, which is part of New York City's drinking water supply."

The concern? The project's scale and potential environmental impact. Worries stemming from other hazards include possible oil spills from barges carrying fuel on the river.

Both my companions that afternoon underscored that humans must stop claiming dominance over all of creation.

"We can’t keep putting man at the top," De Angelo said as we returned to the pier at Ossining. "We're very much part of an ecosystem, and it's hard to restructure what is entrenched."

Noting the steady but still unfinished progress on the Hudson itself, Lipscomb said, "If you (take) your foot off nature’s neck, nature can come back."*

"The river is my neighbor and I don't want that neighbor hurt," he said. "It's not just a matter of stopping pollution. You have to heal. You have to find ways to give back to the river what we took away."

Wise words to ponder as I start 2022, a year to deepen my appreciation for the valley, but also to take up Lipscomb's challenge: How can I make a difference, as an individual, to help save my cherished neighbor, the Hudson River?

*Editor's note: This story has been updated to clarify some of the quotes by John Lipscomb.