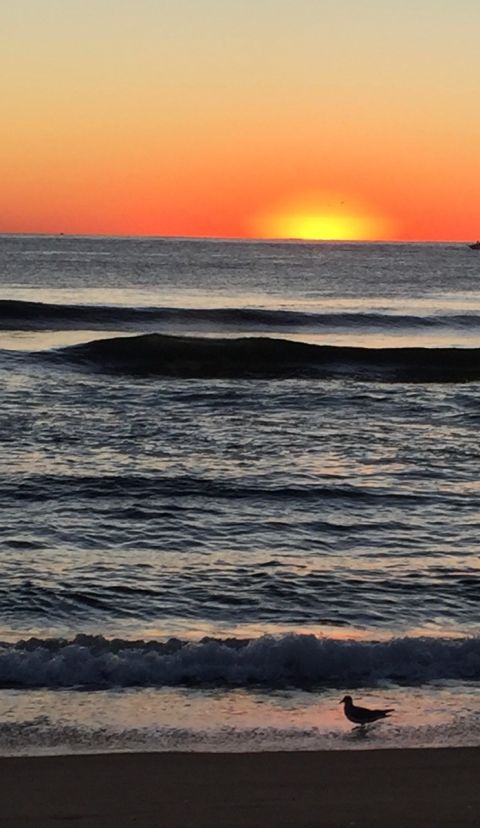 Have you ever seen a ring-billed gull drill for oil?

At dawn, she rises from the mudflats, arcs east over the still-dim dunes as the sun's wet gold splashes the sleep-mussed sea oats awake.

She lands at wave's edge and tiptoes the hollow-boned rig of her body into position, facing the unambiguous horizon.

With one foot and then the other, she pummels the sandy lips of the sea. Tiny creatures surface and shimmer in the sunlight: microscopic worms, minute crustaceans unearthed by turbulence overhead. Extraction by massage. She bows her head and fills her beak with breakfast. Manna —a promise kept by her creator. She takes no more than she needs, stores no surplus — a promise she keeps as creature.

Her harvest overflows to those around her. All are flush with her abundance: sanderlings and willets feast; piping plovers skitter in; least terns drop down from thermals. Plus, her dainty technique aerates the flora and fauna beneath her sensitive, unshod feet.

One reason I garden is to touch stuff: to feel the dust I am made of before evolution came along with specs for fingers and toes and this bowl of jelly I have for a brain that endlessly jiggles and juggles words, that can mindlessly forget to touch where it miraculously came from.

Once, when I worked in medical research, I scooped the brain of a Long Evans rat right out of its skull with a small rubber spoon. Gray jello, the size and shape of a seedless grape, must have sat there in its cozy cranium conducting rodent business day after day till a grant from Big Pharma commissioned its life, fed it green pellets and sterile water from a drip pipe stuck through a wire cage at rat tongue's height. Till I came along, asking fatal neuropathological questions that the brain of this rat somehow figured into answering.

I don't think we were meant to treat each other mindlessly — rats included. And on and on, up and down the great chain of beings.

Oceans included. And all our wild, wet kin.

So when an alert came in from Clean Ocean Action, a local nongovernmental organization, that the outer coastal shelf of the North American continent was up for grabs again, I put on my purple "Mercy for Justice" T-shirt. I packed my notebook and drove to a Holiday Inn in Hamilton, New Jersey, where the Bureau of Ocean Energy Management was offering a public information session on the merits of offshore drilling.

I came away with a wad of shiny handouts: blinding-white cardstock inked with a coordinated family of marine blues. Dark, serious fonts, accented in cheery wet bubbles. Geological maps and charts inside boxes framed with ocean waves in practice-perfect Palmer penmanship. One sheet bore the photo of a distant offshore rig — a silhouette of intricate geometry rendered with as much aesthetic sensitivity as the telescopic lens of an ornithologist would capture a long-legged bird, brooding protectively and proud over her nest — backlit with dawn's early glow. Clearly the BOEM spared no expense in promoting this project.

Yet the best graphic of all was the Bureau of Ocean Energy Management's logo itself, with the godly, wild ocean swallowed by the astonished abyss of the capital letter O.

Computers were set up in a large conference room. Huge screens blasted bar graphs and statistics in endlessly repeating loops, a tidal surge of digital information. I spoke with a lab-coated gentleman, a molecular biochemist, who explained the "National Outer Continental Shelf Oil and Gas Leasing Program" to me.

He spoke in capital letters: OCS, APD, CZM, NOI, and on and on. It was as if the whole alphabet was backing the project and gladly came up with the lingo. He spoke with A-U-T-H-O-R-I-T-Y, sotto voce, as if he were confiding a plan devised by Neptune himself.

It would have been simpler if he'd just explained why we needed more oil, which was really the only question I had come with. But after his detailed, definitive lecture other questions occurred to me, like how come the OCS (Outer Coastal Shelf) is available for L-E-A-S-I-N-G? And who can apply for an APD (Application for Permit to Drill)? Like, could the RSMs (Religious Sisters of Mercy) or the OSUs (Ursuline Sisters), for instance, or the IHMs (Immaculate Heart of Mary Sisters) apply? Or how about a dance troupe from Newark who wanted to use such a rig as a cool summer stage?

And who had asked the fish or the fisherfolk how their lives and livelihoods would fare? And did the whales and dolphins get to vote? How about the translucent zooplankton at the heart of the great oceanic chain of being: the baby jellies and tiny lobster larvae?

And what was the question, again? The question that the oil and gas companies were asking us:

"Would it be OK if we came into your homes and neighborhoods to probe the ocean floor with airguns blasting at 129 decibels every 10 seconds?" For what would be a lifetime to a Peanut Bunker, an eternity to a shrimp?

And WHO owns this ocean anyway, and WHO OWNS our Earth? And ...

Clearly, the looping acronyms had gotten into my outraged brain.

At the end of his monologue, I thanked him, sincerely, for his impressive work and asked, sotto voce, if he had kids.

The usual crowd of eco-folk showed up for the BOEM info session that day. The faithful Bus for Progress was parked out in front of the Hilton like an urgent billboard. The folks from Clean Ocean Action had organized hours of citizen testimony punctuated by call-ins on loudspeaker from our very supportive New Jersey government officials.

Local church groups and pastors with posters were there, citing Scripture and ready to break into hymns of creation, if only asked.

Shellfish were represented by dudes in brilliant red lobster hats, and some held dolphin dolls under their arms. There were rainbow-colored fish shawls, moon snail jewelry in exchange for a pledge to abstain from plastics, and a slew of hand-painted banners with slogans we all know by heart: about all us Earthlings being Stardust and Kin, and wanting the Best Possible Future for Our Children of All Species.

We are given everything — an unambiguous abundance — including birds and beasts to teach us.

Environment | The astonished abyss of the capital letter O

Allow hatred to be enfolded by love