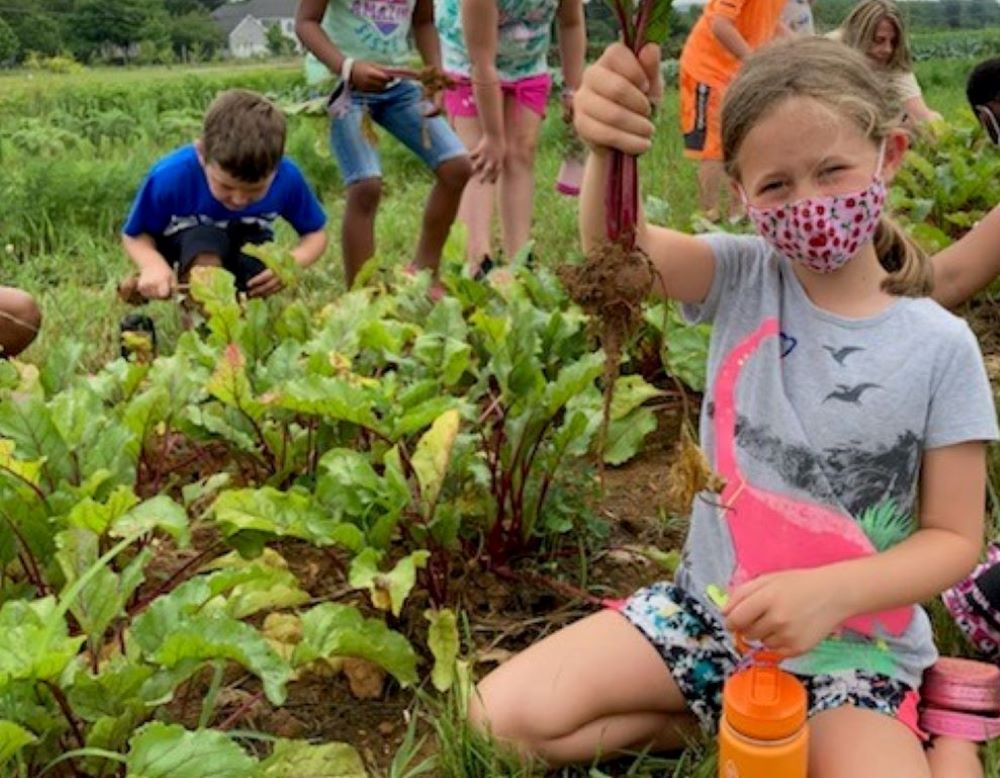 Educational programs are an important part of Monocacy Farms in Bethlehem, Penn. It's owned and managed by the School Sisters of St. Francis, U.S. Province. (Courtesy of Monocacy Farm Project)

Editor's note: The phrase "just transition" is part of the growing lexicon about moving from an economy based on fossil fuels to clean energy. But this phrase's meaning varies. The term can also mean the need for a just transition to new jobs for those employed in industries such as mining. Catholic sisters are involved along the spectrum of transition efforts.

While they differ in size, locale and what they grow, sister-run farms across the U.S. share sustainable approaches to farming, whether they be a commitment to organic practices, promoting locally grown food purchased by shareholder members or providing produce to those in need.

Exact numbers are hard to come by, said Sr. Miriam MacGillis of the Dominican Sisters of Caldwell, New Jersey and director of Genesis Farm in Blairstown, New Jersey, and recognized by her peers as an early leader of sisters concerned about farming and ecological concerns.

MacGillis told GSR that she knows of at least 32 farms, gardens or ecological centers that have roots in educational seminars held at Genesis.

Among the most established sister-run farms are two in Indiana – the Daughters of Charity's Seton Harvest Farm in Evansville, and the Sisters of St. Francis' Michaela Farm in Batesville.

For Seton Harvest farm in southwest Indiana, production and sharing with those needing food are points of pride: In 2020, the farm harvested 29,056 pounds of produce, the farm said, with about a sixth of that — more than 5,300 pounds — donated to local groups such as food pantries. "A portion of each week's harvest goes directly to nearly a dozen different charities serving the poor and hungry," the farms says on its website.

The Sisters of Sr. Francis said the Michaela Farm in southeast Indiana, derives its name from Sr. Michaela Lindemann, an early member of the congregation "who began directing the work on the then newly acquired land in 1854." The farm, which runs a community-supported agriculture, or CSA, program merges "agriculture, education and spirituality" and "builds on and en-fleshes the Franciscan value of 'just relationships with all Creation.' "

In Kentucky, the Ursuline Sisters of Mount Saint Joseph of Kentucky run a working farm with an educational component, where local college students studying farm management conduct experiments and studies. They learn sound farm management techniques, such as organic farming – no pesticides used for orchard trees, for example – the raising of grass-fed cows, no-till planting and crop rotation.

'We are called to stewardship. We must do what we can to keep all of creation healthy.'

Another is the 10-acre Monocacy Farm Project in Bethlehem, Pennsylvania, owned and managed by the School Sisters of St. Francis, U.S. Province. The farm is on 53 of acres owned by the congregation.

The idea of a working farm, set on farmland long owned by the congregation, emerged from the congregation's 2011 general chapter which, in part, called for the sisters "to take concrete action to care for 'our sister, Mother Earth,' " said Sr. Bonnie Marie Kleinschuster, the farm's director and her congregation's provincial treasurer.

The School Sisters' project has evolved to include community gardens, a designated production farm for produce for local soup kitchens and homeless shelters — about a dozen in all.

The farm once had a community supported agriculture, or CSA, program. In 2019, the farm decided to initiate an annual "pick-your-own," or PYO, program. "We felt the PYO could serve a broader range of people," Kleinschuster said. "It is much more versatile and affordable for all income levels. The membership is only $10 for the season and then members donate whatever they can or wish to and support the farm mission."

In separate emails, Kleinschuster and Eli Stogsdill, the farm's chief grower, both spoke of the importance Monocacy and other local farms play in offering an alternative to a farm system in which Americans tend to "secure our food from distant locations," Kleinschuster said.

"The more we can promote 'local,' the better off our communities will be," she said. "We are very dependent upon a supply chain" – a fact underlined by the challenges posed by the COVID pandemic.

During the height of the pandemic, Kleinschuster said the farm was able to provide a steady supply of produce to its partners, like food pantries and soup kitchens, while continuing the annual PYO program, which showed substantial increase in membership. The number of members grew from nine in 2019 to 82 in 2020. This year, the numbers increased to 101 members. "That’s been amazing," Kleinschuster said.

"People from the local community wanted to come out to the farm rather than shop the produce department in the grocery store," she said.

"From conversations I've had with members, young families in particular, it's not just about the food," she said. "It’s about knowing where your food comes from, how it's grown and teaching children to live sustainably."

A just transition to sustainability for future generations is a necessity, Stogsdill said.

"Collectively we are all facing serious ecological crises which are deeply interrelated to social and economic injustices," he said. "Our work is a small contribution to growing healthy communities from the ground up."

That includes a spiritual element, Kleinschuster said. "We are in relationship with all of creation. We are called to stewardship," she said, adding, "we must do what we can to keep all of creation healthy."

Much good work is being done on these and other farms, MacGillis told GSR. But she worries that they are not making a dent in the face of a dire global ecological crisis and a dominant corporate agricultural system that relies on fossil fuels and what she called "industrial approaches toward soil usage."

"We live in an unregulated world of toxic chemicals," she said, adding, "We’re at a very critical point as to whether life will continue on this planet."

She argues that institutional structures remain in thrall to a patriarchal system that does not question the ideas that humans are at the center of creation and that males are superior to females.

"That’s pretty stark," MacGillis acknowledged. "But we need some stark reality checks, especially those of us in religion."

"It’s so late in the day," she said of the pressing climate crisis and its attendant challenges and pressing ecological concerns. "We must now focus on the state of the planet."