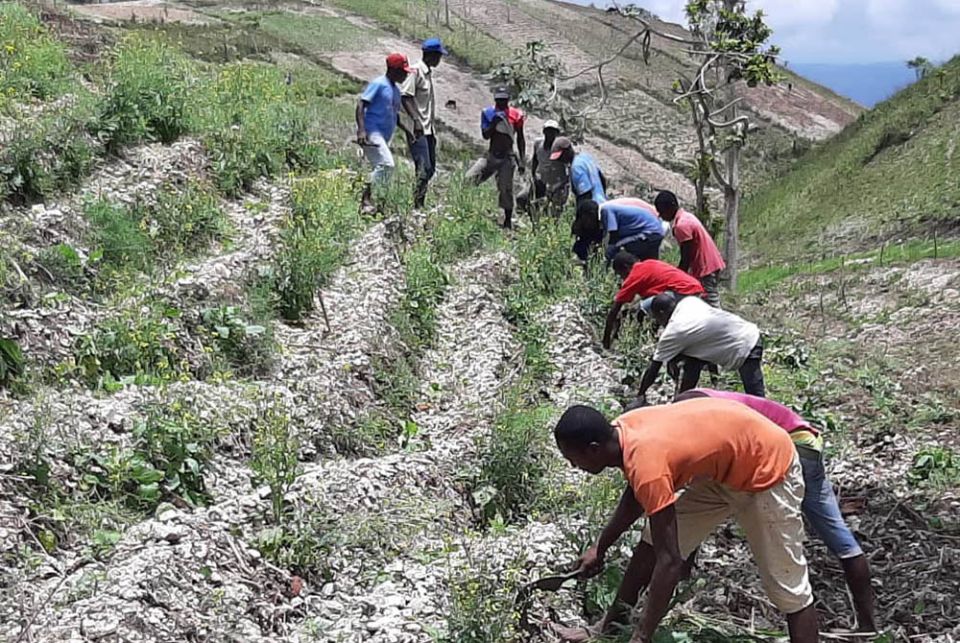 Haitians grow food with the help of Little Sisters of St. Therese of the Child Jesus. (Courtesy of Sr. Denise Desil)

Haiti is often a forgotten country. It seems only an earthquake or a hurricane wakes us up to remember, oh, yes, Haiti is our next-door neighbor, only an hour's flight from Florida.

But this time, as COVID-19, another disaster, raises havoc there, it has not made much of an impact on us. We hear about Europe, Asia and Africa but little about Haiti, our close neighbor.

I have been to Haiti several times and enjoyed its many beauties: people, beaches, land and great food. However, for many others who have not traveled there, the usual image is its troubled history. Although the country has suffered a lot, it is a country of amazingly resilient people.

The 2010 earthquake is believed to be the worst disaster in Haiti's history, according to the University of Kansas' Institute of Haitian Studies: more than 1.5 million people were left homeless and 300,000 people died. But people did not give up. They endured hundreds of helpful outsiders who came and went after that disaster, and after most of them left, the people were back to their own resources. They have kept raising their voices against corrupt governments, determined to fulfill the dream of their forebears.

In the 1790s, the people of this tiny country led a revolt and won independence from France. What is so remarkable about this revolt was that it was African slaves of French colonizers who were able to overthrow their exploiters, making Haiti the second country of the Western Hemisphere, after the United States, to gain its independence from foreign domination.

As the Institute of Haitian Studies details here, this revolution linked our two countries both positively and negatively. Being the first Black independent country in the West was what the institute calls "a ray of hope" to the African Americans in the United States in the 19th century. However, the U.S. government saw their action as a threat against its slave-driven economy and refused to recognize Haiti's independence until 1862, even though Black Haitian soldiers in 1779 had assisted the U.S. in its own fights for independence. To make matters worse, from 1915 to 1934, the United States occupied Haiti to keep it subdued, even changing its constitution and contributing to ongoing instability. 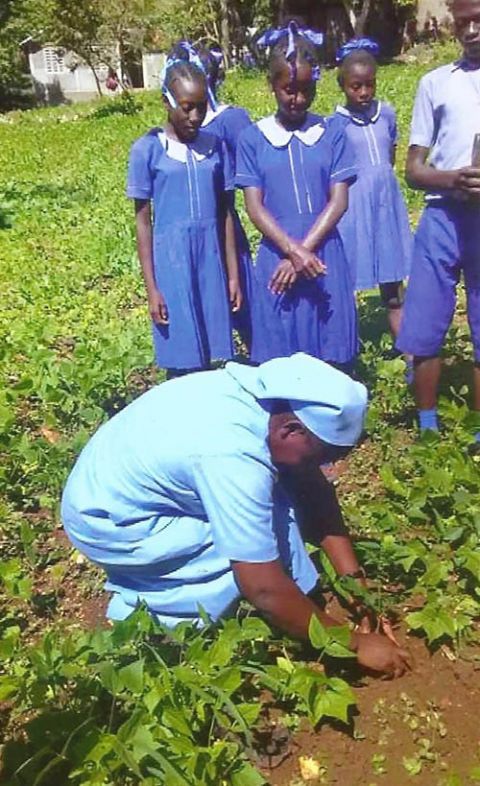 A Little Sister of St. Therese of the Child Jesus works in the fields with children during the COVID-19 pandemic. (Courtesy of Sr. Denise Desil)

We can only hope that even without help from the outside, resilience will prevail. The current government is weak in this pandemic, says Sr. Denise Desil, general superior of the Little Sisters of St. Therese of the Child Jesus, who reports that it "did not know exactly how to deal with this situation," only that it "demanded confinement and wearing masks, and made promises that it could not keep."

There was no formal lockdown issued, according to the Miami Herald, so people in general, although advised to do so, ignored the need to use masks, to social distance or to wash their hands frequently. Instead, they went about business as usual. Sister said churches are open, and schools will open in August.

The New York Times reports that Haiti has 7,100 cases of COVID-19, with 326 deaths. However, the real numbers of infections or deaths are unknown because health centers do not have reporting systems. Sister Denise says the common consensus is that "voluntary and involuntary returnees from the United States and the Dominican Republic caused the virus to increase overnight" and continues to do so.

Dusson St. Jean, program director for Haiti for Medicines for Humanity, a U.S.-based nongovernmental organization that works with the sisters, reports that residents continue to use the crowded public transportation system, the only way to move around cities. Young people continue to play soccer and gather in large groups for recreation. All of this contributes to increasing cases of the virus.

Sister Denise says the government promised each family 3,000 Haitian gourde (about $30), but only a few received the funds. Regular grocery stores are open, but food is expensive and thus not affordable for the majority.

Public open-air markets are still operating because women make a living selling food or products for their families' survival, says Kristen Fanfant, program manager for Medicines for Humanity in Latin America and the Caribbean. They refuse to wear masks because masks make it impossible to "yell out to potential customers" and invite them to buy their wares. 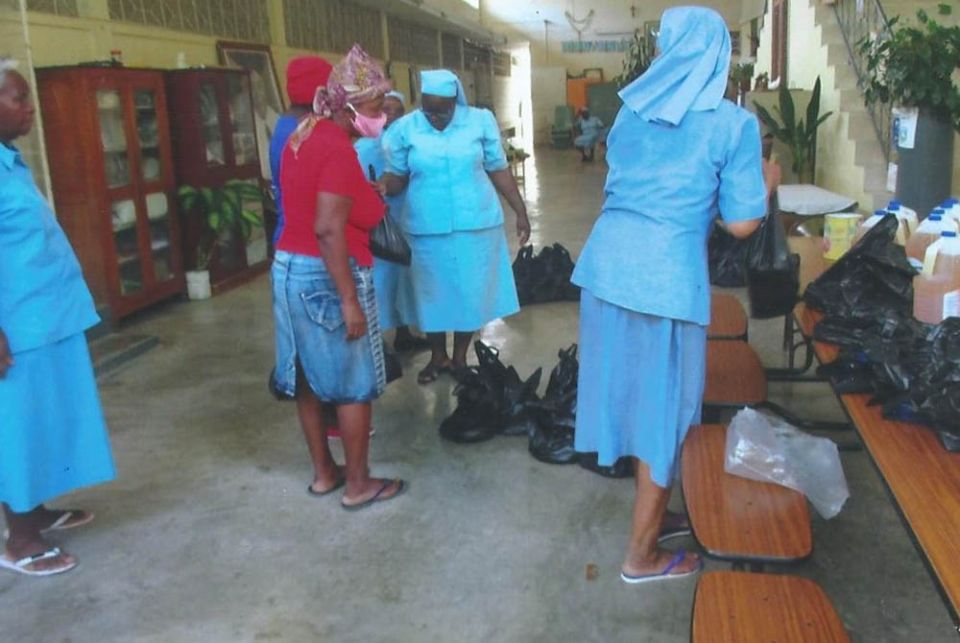 Little Sisters of St. Therese of the Child Jesus distribute food in Port-au-Prince, Haiti, during the COVID-19 pandemic. (Courtesy of Sr. Denise Desil)

Sister Denise says access to electricity is a big problem everywhere, and few families have solar or generator alternatives for food storage; plus, gas prices for generators continue to rise. Frequent market visits become essential in spite of the dangers of lurking infection.

A few families have kitchen gardens, but they are small and only produce a little, Sister Denise says. With food in limited supply, masses of people are hungry and even starving, particularly those living in remote mountain areas. In such regions, people believe COVID-19 is just a fever similar to what they experience with malaria, which they can manage with medication. Thus, following prescribed safety measures seems incomprehensible.

The Little Sisters have clinics in a number of these remote areas of the country and have been obliged to take on the health services alone because state-run public health or care centers are not available, Sister Denise says. The sisters have tried their best to help, but they too are running low on supplies and have no way to procure more. The government has done nothing to provide the clinics with protective gear and medicine, leaving staff and the entire populations vulnerable.

One of the Little Sisters, although not a health worker, contracted the virus and, thankfully, recovered without infecting others. This put the sisters on alert to do even more to help people understand the dangers, even with little help, Sister Denise says.

Testing for the virus is impossible because test kits are extremely limited. Possible infection can only be determined by a patient's symptoms, Sister Denise says. Because of a government safety requirement, the four Little Sisters who are public health nurses had to give up visiting families to promote information about the disease and safety measures. They can only work out of their clinics, which have needed to limit the number of patients to cut down on the possibility for transmission from one person to another. Unfortunately, people are reluctant to access the clinics, fearing they will get sick from the facility itself or from the staff, leaving them vulnerable when they have symptoms.

The sisters have few resources for their work, Sister Denise says. The only medicines available are vitamin C and antacid tablets, a protein mixture for children, paracetamol, cough syrup, bacitracin and antibiotics for eye conditions. If these remedies do not help, people find their way to state-run hospitals, which are not much better off. People come not only for medicines but seeking food, as well, but even finding food for the sisters is a struggle. Each community, whether in the city or in remote areas, has planted vegetables, corn and beans, hoping for a plentiful harvest they can share.

National communication systems in Haiti even in good times are inadequate, but now, such inadequacy exacerbates the health care situation with fewer ways to provide information about the real conditions of the country. There have been protests against the government's lack of action, including lack of security against increasing numbers of gangs prowling the cities, but nothing changes. The future lies again in the resiliency of the people and their determination to not give up.

[Joyce Meyer is a member of the Sisters of the Presentation of the Blessed Virgin Mary and is GSR's liaison to women religious outside of the United States. She is on the Medicines for Humanity board of directors.]