Polish Orionine Sr. Renata Jurczak, who runs a home for single mothers in Kharkiv, Ukraine, gestures to a van full of supplies Dec. 22 during a trip Poland to collect supplies and drive them back to Ukraine. (OSV News/Agata Puscikowska)

While war in Ukraine continues with no end in sight, one group in particular is contributing to a more peaceful world amid the turmoil of Russian invasion — the Catholic religious sisters of Ukraine.

From feeding and sheltering displaced refugees, to evacuating orphanages and providing spiritual and psychological support, to hiding the artistic treasures of their monasteries, these women religious are mirroring what many congregations did during World War II in neighboring Poland. The rule they operate under? "It's our vocation."

Before the war, about a thousand religious sisters lived and worked in several dozen female congregations in Ukraine. After the Russian invasion that began Feb. 24, 2022, most of the sisters decided to stay in the war-torn country to support the local population.

"We couldn't leave those poor people alone," Orionine Sr. Renata Jurczak told OSV News. "We had to help them." Most of the Latin-rite Catholic sisters working in Ukraine are Polish, but some are Ukrainian and Slovak, and some come from Moldova and Armenia.

Shortly after the outbreak of the war, the Orionine sisters from Kharkiv in eastern Ukraine decided to evacuate "Hope," their home for single mothers.

"We knew that if the Russians entered the city, those young mothers would be threatened with violence," Sr. Renata Jurczak told OSV News. In the space of an hour, the sisters packed and escaped Kharkiv together with mothers and their children — a total of 200 people. After journeying for several days, they arrived at the Congregation of the Sisters of the Immaculate Conception in Yazlovets in western Ukraine.

"We opened our monastery because there was a need. And this help continues today," said Sr. Julia Podles from Yazlovets, adding: "It would be impossible to stay for so long without help coming from Poland — food, diapers, clothes from associations, parishes or [charity organizations like] Caritas." 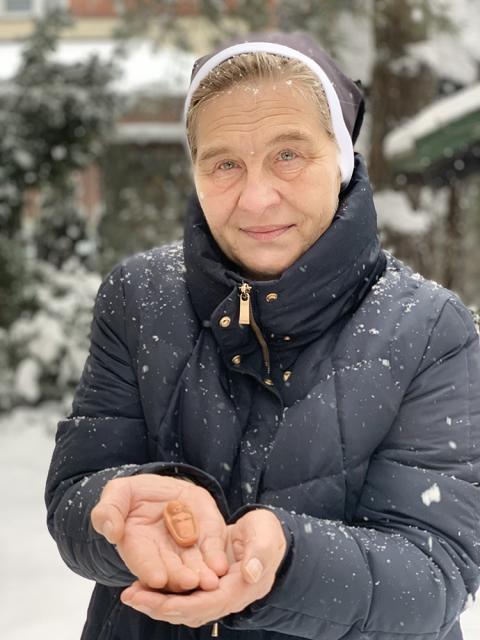 After months of war, several Orionine sisters decided to return to Kharkiv to support those who had remained there.

"Despite the war, children are born there, including unwanted children. Women are left alone, without help," said Jurczak, who along with two other sisters resumed operations of the Hope shelter.

Accompanied by explosions and rocket attacks, the sisters welcome not only single mothers and their children but also those simply left homeless. In December, a dozen women and children lived with them.

"The youngest single mother is 16 and gave birth to twins in November," Jurczak said.

To provide food for the women and babies, Jurczak regularly travels from Kharkiv to Poland, 1,200 miles one way, for supplies. Just before Christmas, she managed to collect two vans of food and an amount of money that will allow the house to run for the next few months.

"Sometimes I am afraid of both travel and rockets," Jurczak told OSV News. "But I know that God is with me."

Even though the town of Zhovkva, 70 miles east of the Polish border, looks akin to something out of a fairy tale, it is at the moment far from a winter wonderland. In the midst of the hardest winter in Ukraine since World War II, Dominican sisters based there have been accepting displaced people and relocating them — and they have done so since the beginning of the war. The proximity of the border allowed them to organize a large aid station, which has received European supplies throughout the war.

"We sort it and send it farther east," Dominican Sr. Mateusza Trynda told OSV News. "Winter is the worst."

In many places at the moment, there is no electricity, houses are damaged by rockets and there are food shortages. "That is why we must continue to organize concrete help," Trynda said.

Related: In Ukraine, 'a mission for light' illuminates daily life far from the fighting

Catholic religious women in Ukraine also look after orphaned children. At the beginning of the armed conflict, many orphanages were evacuated to neighboring Poland. Some returned to Ukraine after a few months when the children missed their homeland too much.

In the orphanage of the Sisters of the Angels in Zhytomyr, several children make their home. The nuns make sure that the little ones do not feel the effects of the war, providing not only a roof over their heads but also psychological support. "We just want them to feel safe," Sr. Irena Wlasowa, a Sister of the Angels, told OSV News.

The Sisters of St. Joseph near Lviv and the Sisters Servants of the Blessed Virgin Mary of the Immaculate Conception of Horodok in western Ukraine run centers for the sick and the elderly. They also decided not to leave after the Russian invasion.

"Our people cannot be evacuated. They would not survive the move," Servant of the Blessed Virgin Mary Sr. Adrianna Kis told OSV News. "We do not leave them even during a missile alert so that they feel safe. If we die, we will die together."

The elderly people who are their charges remember the Second World War — and the current conflict is yet another trauma for them. If not for the support of the sisters, many patients would be doomed to loneliness and, as a result, to death.

Many religious convents in Ukraine also support the local soldiers fighting for freedom. The sisters collect food for them, but above all, provide spiritual support. For their safety, they ask for anonymity.

"We meet with soldiers to talk about God, give rosaries and pray together," one of the sisters said. "We want to bring them hope. Ukrainian soldiers are grateful to us, they are willing to pray even though they have not attended church services before the war."

The sisters also take care of the widows and children left behind by fallen soldiers. They work in silence, without publicity. They are not heroes, they say. Rather, what they do is an expression of their love for God and neighbor, and, in this way, they fulfill their vocation.