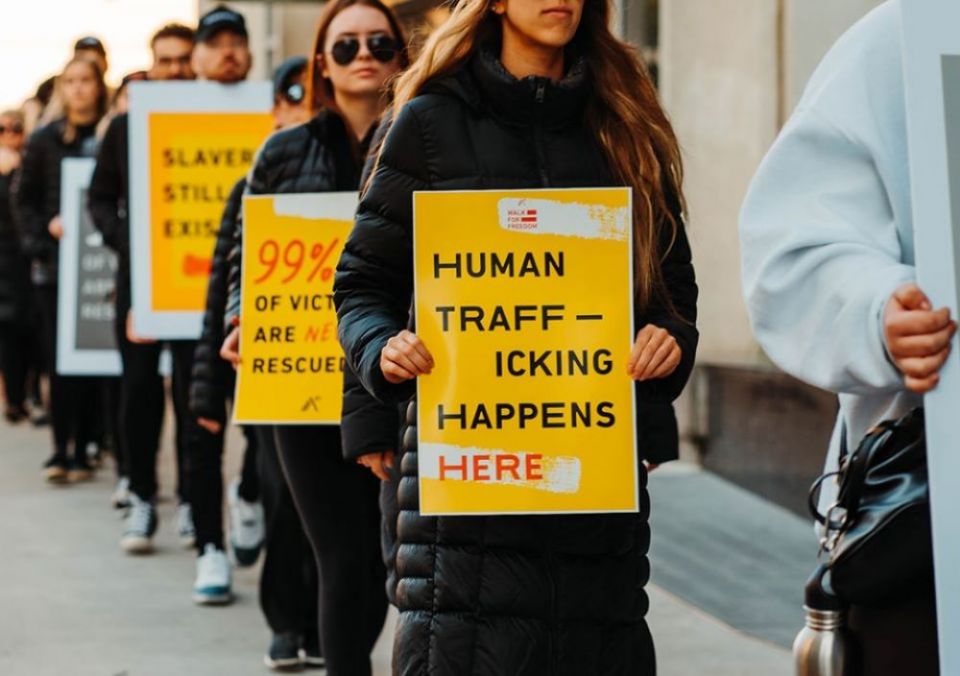 Catholic sisters around the world are deeply committed to ending the scourge of modern-day slavery. Through regional organizations, such as the U.S. Catholic Sisters Against Human Trafficking and Rome-based Talitha Kum, initiated by the International Union of Superiors General as a "network of networks" active in five continents coordinating efforts of congregations in 60 or more networks, sisters work to raise awareness, aid and rehabilitate victims, and lobby for stricter laws and enforcement.

Global Sisters Report reflects these efforts in our coverage of sisters' ministries and work related to human trafficking and through columns by sisters. We also take opportunities to help raise awareness through other venues. Our GSR in the Classroom curriculum, for instance, offers six lessons about human trafficking. GSR correspondent Soli Salgado, who has reported extensively about human trafficking, produced a special video presentation for the annual California Ministry Conference Hope, Heal, Renew, sponsored by eight dioceses and archdioceses from California, Nevada and Hawaii. The 2021 conference was a virtual gathering held Nov. 4-6.

The hourlong segment, entitled, "Migrating Toward Exploitation: Why Migrants Are Susceptible to Human Trafficking, and How Sisters Are Helping," featured an explanatory introduction, plus interviews with Sr. Sally Duffy, a Sister of Charity of Cincinnati who is involved with migration and trafficking issues, and Jennifer Reyes Lay, executive director of U.S. Catholic Sisters Against Human Trafficking.

Other resources are available to help observe the day and month, according to Sr. Ann Scholz, a School Sister of Notre Dame and the associate director for social mission for the Leadership Conference of Women Religious, including a toolkit with events, prayers and other information. She also recommended the  anti-trafficking page of the Justice for Immigrants website, and a prayer to end human trafficking posted on the website of the U.S. Conference of Catholic Bishops.

There are also other official days to commemorate trafficking victims and efforts to raise awareness and stop human trafficking. Feb. 8 is the feast day of St. Josephine Bakhita, who was born in Sudan and sold into slavery and taken to Italy where she eventually joined the Canossian Sisters. Feb. 8 is a World Day of Prayer, Reflection, and Action against Human Trafficking, designated by the Pontifical Council for Justice and Peace and the International Union of Superiors General.

The theme for this year's day of prayer is "The Power of Care — Women, Economics, Human Trafficking." The International Day of Prayer website has more information and updates, including background, social media banners and posters and an invitation to join the prayer campaign. Networks of religious congregations from around the world will join together for a global prayer marathon. More information will become available.

In addition, the United Nations observes the World Day Against Trafficking in Persons on July 30. Talitha Kum, along with UISG, last year launched a special campaign, "Care Against Trafficking," on July 22 in anticipation of this day. "We ask our networks and partners to stand together and amplify our efforts to transform the economy of trafficking into an economy of care that empowers everyone, and especially women, to foster safe and thriving communities," the organization said, according to the Catholic News Service article about the launch. "Today, we call on all people of goodwill to come together and tackle the systemic causes of human trafficking … [and] … we call on governments to commit to long-term support for survivors, including quality education, work permits, access to justice and compensation, and medical and psychosocial assistance."

Talitha Kum also held its Call to Action event on the International Day for the Elimination of Violence against Women on Nov. 25. The event brought together representatives from various networks from around the world; UISG, partners from Global Solidarity Fund; representatives from the Holy See and embassies, and supporters from nongovernmental and intergovernmental organizations involved in anti-trafficking efforts.

While much of the attention of anti-trafficking is on women and children who are trafficked and abused, there is also growing attention also to the issue of labor trafficking and workers who are exploited. Salgado last year wrote about the plight of seafarers who can suffer exploitation and abuse but often, as she noted, "fall just outside the realm of trafficking advocacy." Nonetheless, anti-trafficking organizations are working to raise awareness of the issues they face.

There can never be enough attention to the issue of human trafficking, or the efforts by Catholic sisters and others to help women, children and vulnerable adults avoid becoming victims of trafficking, or assisting those who are already caught in the trap. So today, this month, Feb. 8 and every day, take time to pray and add your efforts to the cause to stop human trafficking.

Q & A with Sr. Imelda Poole, networking with European religious against trafficking