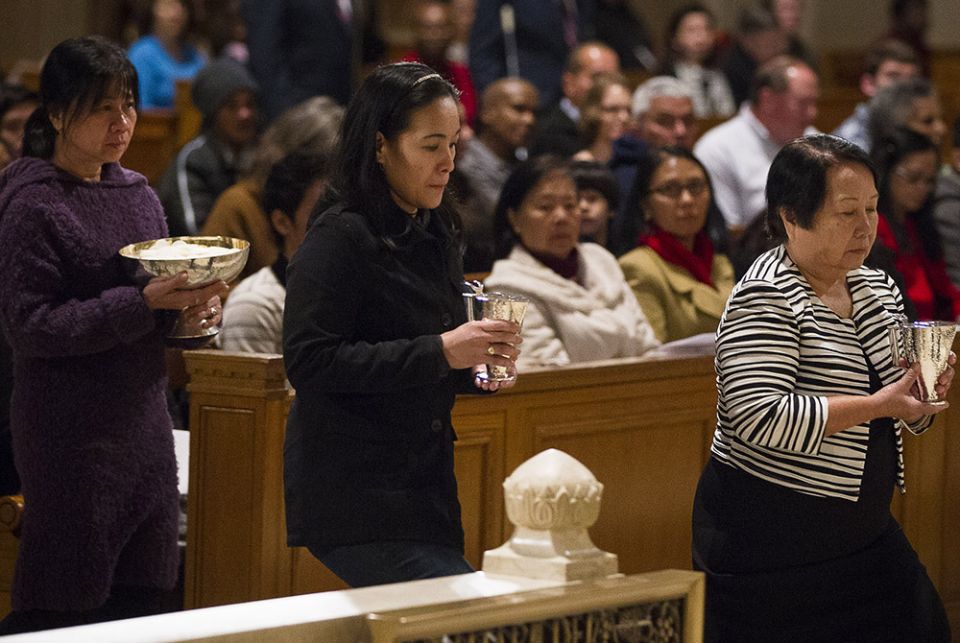 Survivors of human trafficking carry offertory gifts during at Mass celebrated Feb. 8, 2015, at the Basilica of the National Shrine of the Immaculate Conception in Washington to mark the International Day of Prayer and Awareness Against Human Trafficking. The Mass was celebrated on the feast of St. Josephine Bakhita, a Sudanese saint who was kidnapped by Arab slave traders in the 1800s. (CNS/Tyler Orsburn)

Editor's note: Today, Feb. 8, is the International Day of Prayer and Awareness Against Human Trafficking. It is also the feast day of St. Josephine Bakhita, the patron saint of victims of human trafficking. To mark this day, Global Sisters Report is publishing an extra column highlighting how one community is fighting human trafficking. Read about other sisters in this ministry.

Trafficking is an unjustifiable violation of the victims' freedom and dignity, which are integral dimensions of the human person willed and created by God. This is why it must be considered, without a doubt, a crime against humanity.
—Pope Francis

Throughout the world, an evil as old as humanity persists: human beings enslaving and abusing other human beings. With intensified environmental, political and social crises, human trafficking is increasing every year.

Some facts about human trafficking:

Among the anti-trafficking activists — the 21st century abolitionists — are our Medical Mission Sisters around the globe, working for a time when everyone experiences safety, wholeness and well-being. Among many here are some examples:

At the Indira Gandhi International Airport in Delhi, India, Sr. Babita Kumari Das waited patiently with another sister from the Franciscan Missionaries of Mary to meet a woman who escaped from slavery. A professional lawyer, Sister Babita would use her resources to help the woman get back on her feet and reunite with her husband and son. For six hours, she listened as the woman told her painful story of being tricked by a family member, who promised her a job in Malaysia. Instead, the family member sold her to a trafficker in Kuala Lumpur. The brothel that imprisoned her was later raided by police and the traffickers were arrested. 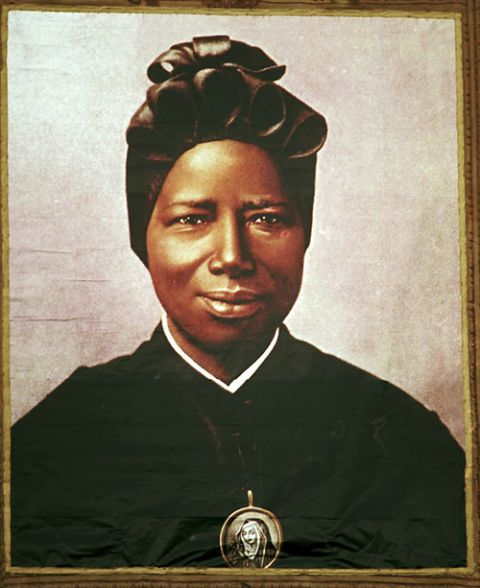 A tapestry portrait of St. Josephine Bakhita, an African slave who died in 1947, hangs from the facade of St. Peter's Basilica during her canonization in 2000 at the Vatican. St. Bakhita was born in the Darfur region of what is now Sudan. Her feast day is Feb. 8, the International Day of Prayer and Awareness against Human Trafficking. (CNS/L'Osservatore Romano via Reuters)

Sr. Nympha Que works in the Philippines at a center for migrant laborers. She was deeply touched by the story of a woman confined to a wheelchair because, after falling from a roof at her job, her employer forced her to continue working rather than go to the hospital. Other women tell stories of sexual and physical abuse. As Sister Nympha explains in presentations she gives to students and parents, migrant workers are particularly vulnerable to traffickers who prey on their desire for a better life.

In her office at our North American Headquarters in Philadelphia, 91-year-old Sr. Teresita Hinnegan is surrounded by stacks and stacks of information about trafficking, exploitation and gender violence.

To her, these problems are interconnected — it is impossible to read a story about sexual harassment, for example, without connecting that experience to the other ways societies determine who has value and who does not.

After retiring from a faculty position at the University of Pennsylvania School of Nursing, Sister Teresita co-founded Dawn's Place in Philadelphia, a center for trafficked women, in 2007.

According to its website, Dawn's Place has a clear mission: to improve the lives of women trapped by, or at risk for, sexual exploitation, by providing housing, trauma recovery services, vocational training and other help for women who may have experienced incarceration, addiction, abuse, insufficient medical care and separation from family or country of origin.

Sister Teresita explains that, often, the women need resocialization. She adds, "Some women make it, some women don't. Even if they have failed in their own eyes, [they've made] baby steps to recovery." Sister Teresita is as passionately invested in prevention as she is in healing. This has led her to her current project, a film on our society's responsibility to teach boys how to develop into men who value and respect women.

I have the privilege to be my congregation's representative to the U.N., and serve on the NGO Committee to Stop Trafficking in Persons. For the past several years we have done advocacy at the U.N. and educated the public about this modern-day slavery.

On several occasions I had the opportunity to meet and talk to Nadia Murad. I admire her courage and passion for justice, especially after hearing Nadia speak at the United Nations. In August 2014, Islamic State militants invaded the Yazidi community where Nadia, then age 21, lived in northern Iraq's Kocho village. Six of Nadia's brothers and her mother were killed. Nadia was sold into slavery, enduring brutal rape and beatings. After escaping Mosul, Nadia has bravely spoken out and published a memoir, The Last Girl: My Story of Captivity, and My Fight Against the Islamic State. I was present at the launching of her book at the U.N. and bought a copy signed by her. In 2018 she was awarded the Nobel Peace Prize. Nadia's resilience is what touched me most!

Five years after the Member States of the United Nations committed to the Sustainable Development Goals, and as we prepare to celebrate the 75th Anniversary of the U.N. in 2020, it is important to take human trafficking seriously.

On Sept. 9, the special rapporteur on contemporary forms of slavery, Urmila Bhoola, gave a report presented to the Human Rights Council in Geneva. As reported in a U.N. news release, she noted that over 40 million people are enslaved; one in four victims is a child; over 60% of those in forced labor work in the private sector; and 98% of women and girls subjected to forced labor have experienced sexual violence. According to Bhoola:

The number of people at a risk of being exploited or enslaved is likely to increase based on several factors. In the wake of climate change, people may lose their livelihoods, young people who don't have access to decent work may migrate through unsafe channels and changes in the world of work such as automation may push already vulnerable people out of their jobs. Such scenarios can increase people's vulnerability to slavery.

We cannot afford to stand by while more and more people are driven into forced labour, servile marriage or child labour. States and businesses must act now to end slavery, also as it is economically unprofitable. Slavery leads to increased public health costs, productivity losses, negative environmental externalities and lost income.

Saying that current efforts to end slavery have been insufficient, Bhoola urged states and businesses to take more decisive action to end slavery — "by committing more resources to this effort and by adopting and implementing public policies which address contemporary forms of slavery effectively."

As people of God and faith-based organizations, we religious are responding to this evil but we cannot be complacent; this should be a wakeup call for us too!

[Originally from India, Celine Paramundayil is the international representative for the Medical Mission Sisters' nongovernmental organization at the United Nations.]

Q & A with Sr. Kathleen Bryant

Sex trafficking is 'rooted in structure of society,' says speaker