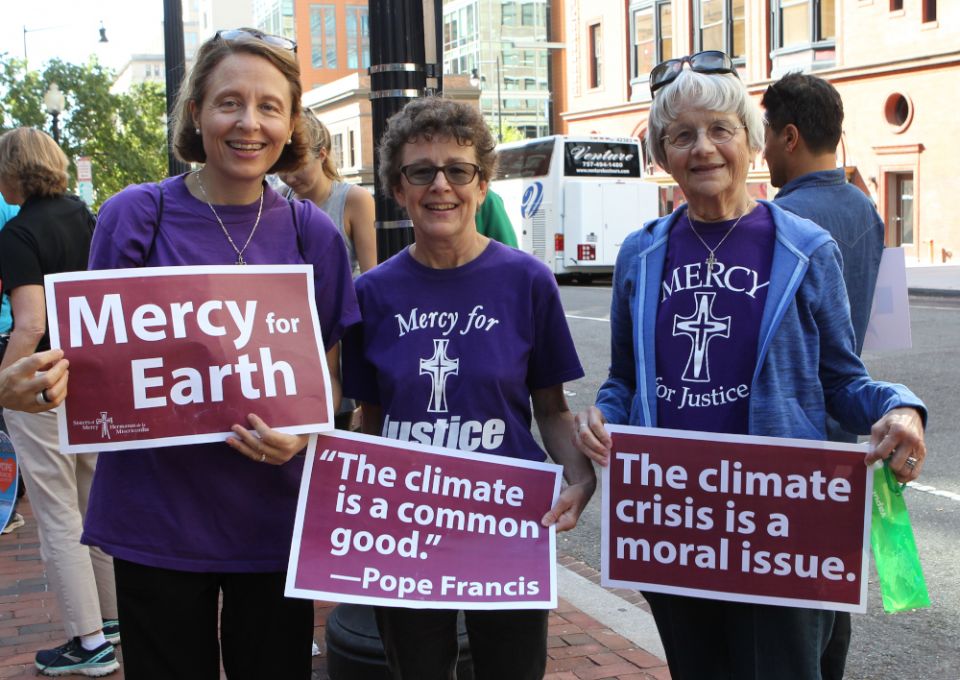 Mercy Sr. Aine O'Connor, Marianne Comfort, justice coordinator for the Mercy Sisters, and Mercy Sr. Rita Parks, all from Silver Spring, Md., hold aloft signs Sept. 20, 2019, in front of St. Patrick's Church in Washington as they prepare to join the climate change march. The Washington rally was one of several taking place across the country and in England and Australia. (CNS/Carol Zimmermann)

Washington — Climate change protests that took place across the country Sept. 20 had a distinctively young feel to them with throngs of teen protesters filling the streets with their handmade signs and young people giving impassioned rally speeches following the example of the Swedish teen activist Greta Thunberg.

But that's not to say adults weren't there, on their own, or as chaperones. Women religious, and Sisters of Mercy in particular, attended several of these protests and stood out by wearing purple "Mercy for Justice" T-shirts and carrying pre-made signs with messages: "The climate crisis is a moral issue" and "Mercy for the earth."

Mercy Sr. Denise Sausville, who participated in the climate change march in St. Louis, said she was disappointed the march was on a weekday, which limited its numbers, but she was also energized by the sense of urgency from the young people there.

Sausville, 75, a social worker and spiritual director, is no stranger to protests, activism or environmental issues. She currently serves on the Inter-Community Ecological Council of Women Religious in the St. Louis area and each month she accompanies immigrants without legal documentation to check-ins with the U.S. Immigration and Customs Enforcement.

She said the current protests remind her a little bit of the anti-Vietnam War movement of her day where she described herself as "kind of left-wing" participant; she said one difference is today's protesters "don't have to be any wing" because they have scientific facts behind them.

And some also have found a spiritual connection to their environmental concerns. In this regard, she said the Mercy sisters have something to add to the current movement because they have been talking about this connection for more than 25 years and have listed care of the earth as one of the order's top critical concerns.

Religious have been contemplating this "interconnectedness" for a long time, she told Catholic News Service Sept. 23.

The Mercy sisters issued a statement Sept. 17 in support of climate change protests saying they were "inspired and motivated" by those who planned to participate and by the leadership of young people such as Thunberg and students at their own Mercy schools nationwide.

"Our planet and impacted communities are crying out, and as people of faith, we must demand an end to the age of fossil fuels and encourage our leaders to adopt practical solutions to begin healing our earth," the statement said. It also said it was fitting these protests were taking place during the "Season of Creation," observed Sept. 1 to Oct. 4, "a time when Pope Francis calls us to celebrate with prayer, lifestyle changes and prophetic actions."

The sisters described the current environmental situation as "a moral crisis that requires all of us to grow in our own awareness of complicity." They said they were doing their part by "adopting measures to reduce our own greenhouse-gas emissions and to advocate for bigger solutions in international agreements and in national, state and local public policies."

Doing even small steps is important to Mercy Sr. Michelle Salois, a clinical social worker in St. Louis, who told CNS Sept. 19 that she planned to attend the climate change protest the next day because she feels passionately about this issue.

Protests weren't always her thing though. The 64-year-old said she only started this type of activism three years ago and now feels bad she didn't start doing this sooner.

She said demonstrations can be a hassle, but it helps to be together with larger groups who disrupt their lives for a greater concern. And it helps to be doing this with other Mercy sisters, whom she described as "amazing women who care about the most important things in life and are willing to put their lives on the line together."

But Salois also is willing to get her hands dirty, literally. Four years ago, she became a certified permaculturist helping people garden using the right plants for their climate and building up soils gradually to make them richer in nutrients.

She said there is a connection between soil and climate change, and she gave up a lot of weekends to learn this, but she said it was a tangible way to counter her "despair over the destruction of earth's life."

What has been happening to the environment and other issues, like immigration, she said, causes her to "really lean" on her faith "that somehow all will be well."