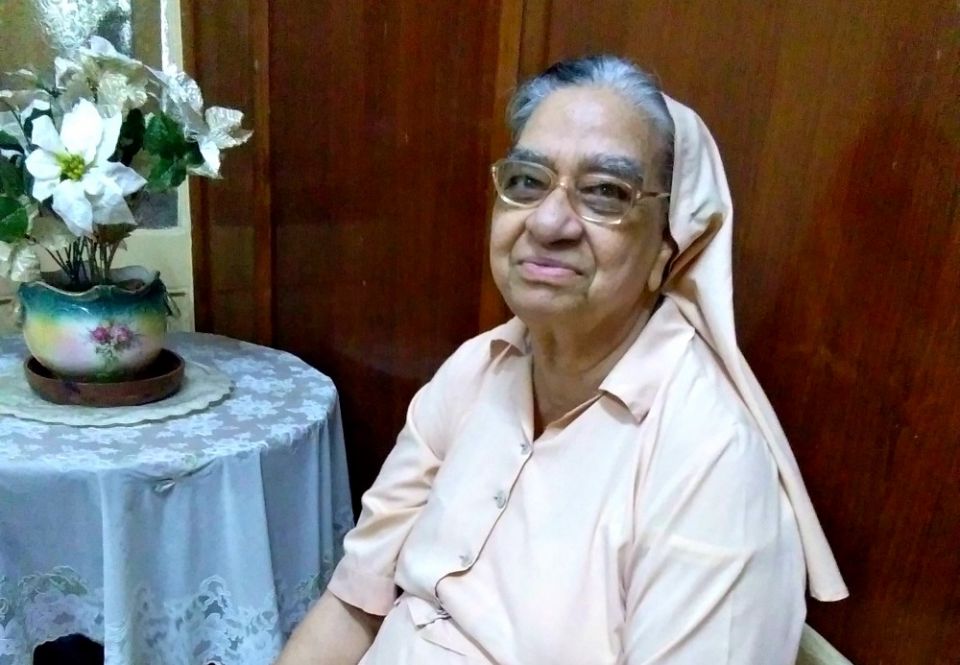 Sr. Rosita Gomes of the Franciscan Hospitaller Sisters of the Imaculate Conception in June at her convent in Bandra, Mumbai, western India (Lissy Maruthanakuzhy)

So the Mumbai-based nun from the Franciscan Hospitaller Sisters of the Immaculate Conception is on her feet at the age of 88, reaching out to those on the periphery: drug addicts, prisoners, unwed mothers and others.

GSR spoke to Gomes when she visited Panaji, capital of Goa state, in early October to spread Marian devotion, her latest mission. She says the mother of God has asked her to do so.

GSR: You are a trained teacher. How did you become a social worker?

Gomes: I entered religious life with a desire to serve the poor. By obedience, I took up teaching in our schools and did it wholeheartedly because I believe in the vow of obedience. When we desire something, God opens up doors before us.

I was posted in our community in Agra, the city of the Taj Mahal. Once, while visiting the Taj Mahal, I noticed a few people infected with leprosy begging there. On searching, I found out that 75 of them lived under trees on a hill close to the Taj Mahal, one of the new Seven Wonders of the World. They did not have houses. That was in 1967.

I cycled from my convent to meet them each day. I asked the then-archbishop, Dominic Romuald Athaide of Agra, to help me in this mission, and he introduced me to a German priest who was visiting India then. The priest visited the place and gave me enough money to build houses for them.

In 1968, I formed an association called Kusht Ashram (A House for Lepers). I also contacted JALMA (Japanese Leprosy Mission for Asia), a Japanese rehabilitation center in Agra for young boys infected by leprosy. For a year and a half, I taught them songs and played games with them. Many laypeople joined me in the course of time.

Did the leprosy patients stop begging?

After we built small houses for them, they stopped begging. But I beg for them. [She smiles.] Doctors and other people help me with funds and medicines. The leprosy patients have organized some small-scale industries that provide income. Once, Cardinal Oswald Gracias, who was then the archbishop of Agra, visited us and offered 500,000 rupees [$7,690 then], and we used it to build more houses for them.

How did you start working for drug addicts?

I seek to do God's will always. God leads me from one mission to another. I started prison ministry unexpectedly in 1983, when I was asked to visit a neighbor in prison who accidentally killed his wife. I visited him again and carried his letters to his children to help them maintain good relations. Thus began a ministry I hold dear to my heart. On my first visit, I met 21 Catholic prisoners and became a contact person between them and their families. The same year, during Christmas, I found 16 more Catholics. 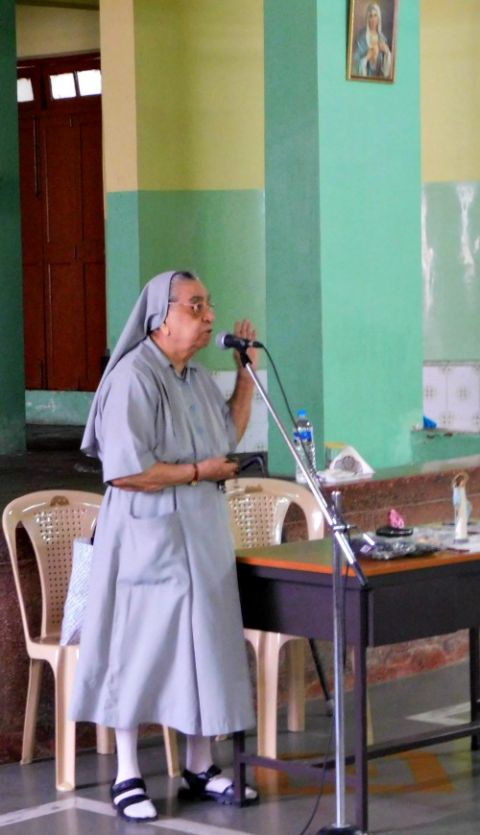 I also found 42 Catholic boys in a juvenile jail arrested for drug addiction. They were freed after three months, and I took them to a doctor for a checkup. I did not take them to the usual hospital the jail authorities send them to because the ward boys there would give them drugs. They were treated for chest problems in another private hospital. Drug addicts normally suffer from lung-related illness. I would buy medicines, take the boys to their parents and tie them to the bed until they recovered. Gradually, they were all healed and now lead normal lives, except one who returned to bad company and lost his life.

How did their parents react?

The parents were very happy that I took care of their children. They were mostly teenagers who took drugs after they felt neglected by their parents. The boys could get drugs from roadside vendors. For money, they would steal things from their homes. I managed to convince the parents to give love and care to their children.

You introduced the church to people behind bars much before it started Prison Ministry India. How did you begin?

As said earlier, all this started when I was asked to visit the neighbor in jail in Mumbai. One day in 1970, my superiors suddenly asked me to come to Mumbai, then Bombay. They did not tell me the reason. When I reached Mumbai, they told me my mother was in a difficult situation. I am the only daughter, but I had little contact with her for more than 10 years, in keeping with our religious rules. Meanwhile, my only brother had left for Canada, leaving my mother alone. My superior asked me to stay with her and care for her. So I taught in the school during the day and spent the night with my mother, as my house was close to the convent. It was during this time God directed me to the prison ministry. When God asks me to do something new, I jump at it at once. And he leads me on.

I visit adult prisons and juvenile homes at Christmas and Easter and on Aug. 14, the feast of St. Maximilian Kolbe [the patron saint of prisoners]. Other times, I go with food and other things, if they call me. Many laypeople help me in this ministry. 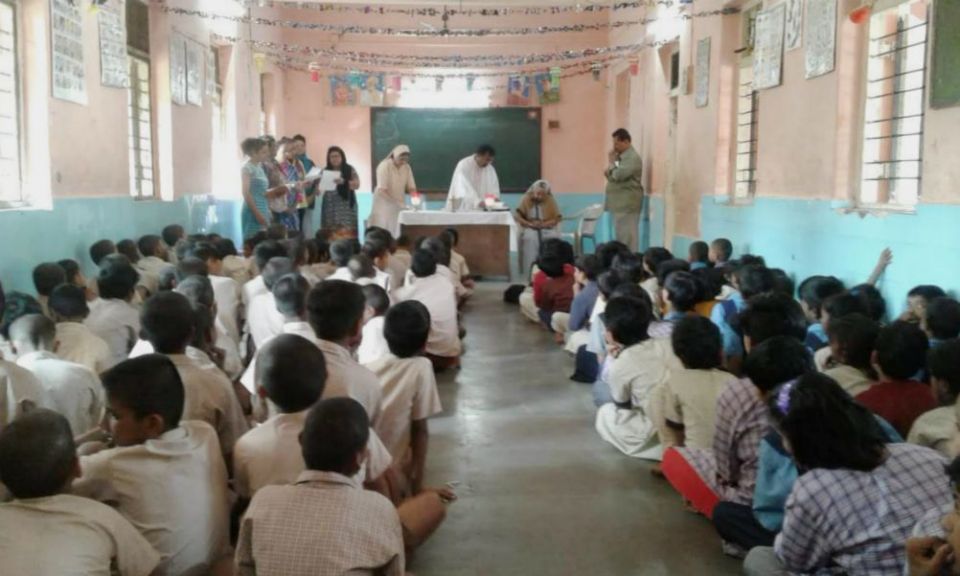 You organize Masses in prisons. How do you do that?

Eucharist is a celebration to ask God's blessings on the people living there. The church has a God-given commitment to reach out to those on the peripheries. Many behind the bars are there for no fault of theirs. Christ made no discrimination in his mission. He reached out to all. We are his followers. He asks us to carry his message of love, peace and justice to everyone. Our lives become meaningful when we give of ourselves in love.

What else have you done?

Finding partners for young people. Many times, worried parents come to me, saying they can't find proper partners for their children. With some well-wishers' help, I have helped settle 18 Catholic couples and one non-Catholic. Some are now in my mission.

Another mission that came my way was helping orphans and destitute children. My convent is located near a well-known basilica dedicated to the Blessed Virgin in Mumbai. One day, a young woman came to the basilica with a baby girl. After praying for some time before the Madonna, she asked a policeman stationed outside what she should do with her child. Her husband had left her for giving birth to a baby girl. The policeman, who knew me, directed her to me. In the following months, six more children came to me. We looked after them until they completed their studies in our school and college and managed to settle in life. 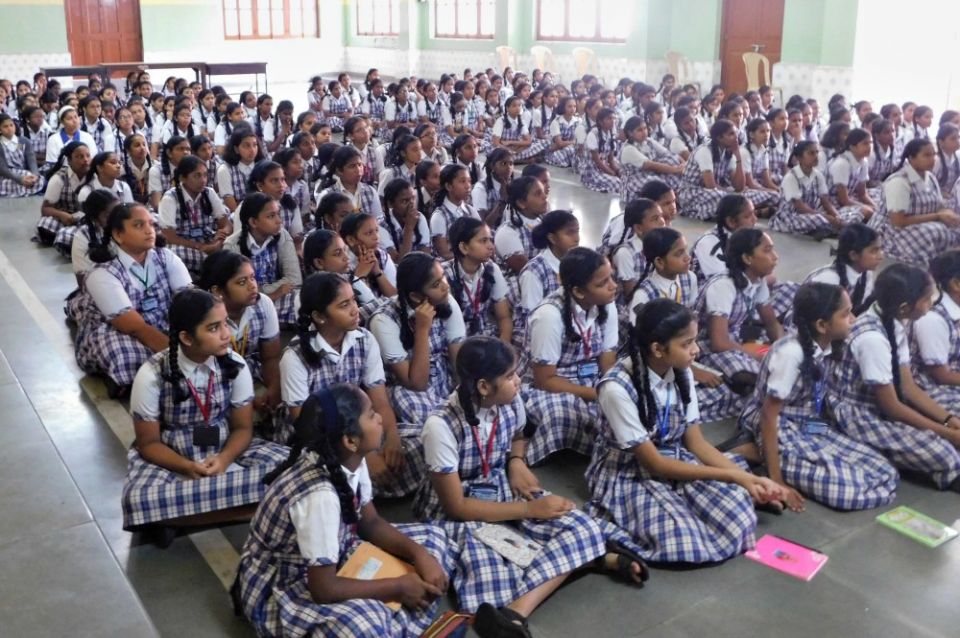 A group of students listen to Franciscan Hospitaller Sr. Rosita Gomes on devotion to Mary in October at Mary Immaculate School, Panaji, capital of the western India state of Goa. (Provided photo)

Why did you begin the Stations of the Cross on the back streets of Bandra [a Mumbai suburb]?

Six back streets around Bandra have crosses built by our ancestors and preserved as a reminder of our belief in the suffering, death and resurrection of Christ. We have been walking the Way of the Cross through them on Fridays in Lent for the past 20 years, imploring God's mercy. We pray for people of all religions.

What message do you have for young religious?

I ask them to say constantly, "Thy will be done" with Mary, our blessed mother, and also a prayer to the Holy Spirit. I want to say, "Young sisters, please take care of your elder sisters. You exist because of them."

It is very important to be obedient in your committed life. It will bring you blessings. Trust in the Lord. In the light of recent sex scandals in the church, I tell them that they can be friendly with priests and men, but not to become too familiar.

Ministry | Q & A with Sr. Rosita Gomes, 88, working with those on India's periphery

Q & A with Sr. Tariro Chimanyiwa