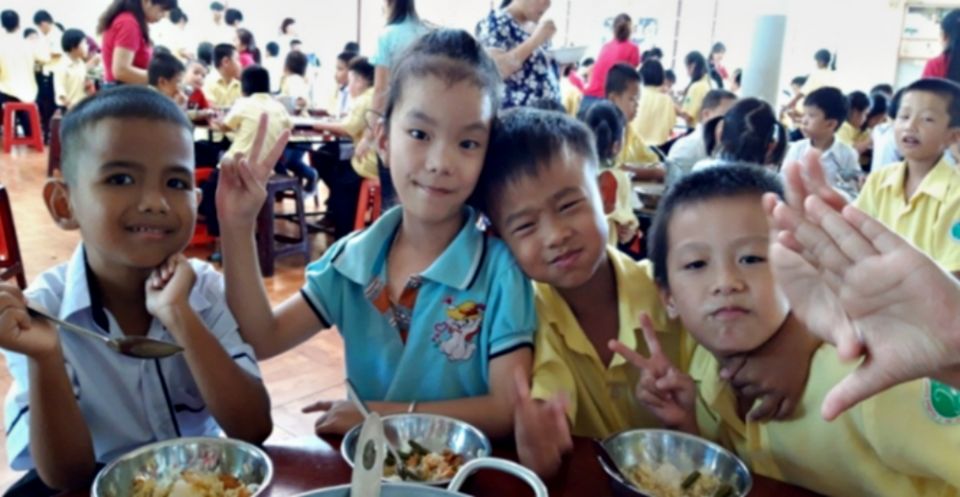 I was so excited when Sister Madeline, my superior, gave me the opportunity in June 2019 to tag along with Leanne Hoang and her husband, Damin, to visit the Sisters of St. Paul de Chartres' Vi Nhan School for children with special needs. (Leanne began missionary work in July 1995 in the Highlands of Vietnam and now works in many regions of South Vietnam.)

I had heard the story of one child that made me want to see the place. Thirty years ago, Sister Celestine, the superior of the school, was walking in the coffee plantation on her way to the local church for Mass when she thought she heard a baby crying. She followed the sound and discovered a tiny baby boy wrapped in a tattered blanket. She took him back to the convent and named him Hung.

It took some time before the sisters realized he was blind. He started learning Braille in kindergarten and concentrated on music, his favorite subject. He excelled in this along with other academic courses. His ability to compose music and lyrics earned him a place in Ban Me Thuot University.

When he graduated, he returned to Vi Nhan School as a teacher with his wife and baby. While there, he was invited to Orlando, Florida, to perform and attend a conference for the visually impaired. He then toured and performed in other states, including in New York City, for six months with his wife and child before returning to the school.

My trip to Vi Nhan School was a big adventure from beginning to end. First, we started out very early when it was cool, a relief from our scorching temperatures in Qui Nhon. Arriving in Ban Me Thuot was difficult because it was new territory for the driver. Howling winds grew stronger and dark skies threatened rain, as we encountered what seemed like thousands of scooters, bicycles and people on the streets, which kept us all alert. Being somewhat lost, Leanne phoned the sisters for directions to our hotel.

The gray habit of the St. Paul de Chartres Sisters was suddenly visible in the darkness outside the hotel. Sister Theresa welcomed us, helped us register and before we knew it, she was on her scooter rushing back to the convent to prepare our dinner at 6. Although tired, we were excited and eager to meet the sisters and students.

We arrived at the entrance of the convent, and were greeted by lines of cashew trees hung with bright red fruits. Sister Juliana, the superior, greeted us with warm hugs and gave us a quick tour of the school: roomy classrooms, spotless kitchen, bedrooms filled with bunk beds, and a bright dining room. Here we met the other sisters and 20 of the 195 students who eagerly waited to see Leanne and Damin.

This couple has been working with these sisters for over 10 years now. They hold clinics, bringing doctors and dentists to work with the children.

After the noisy greetings, we continued our tour, and came upon what looked like cotton balls. They turned out to be the cutest puppies — that captivated our attention for several minutes. The sisters then showed us their family of pigs and their garden, filled with avocado and mango trees and bursting with beautiful daisies and roses. 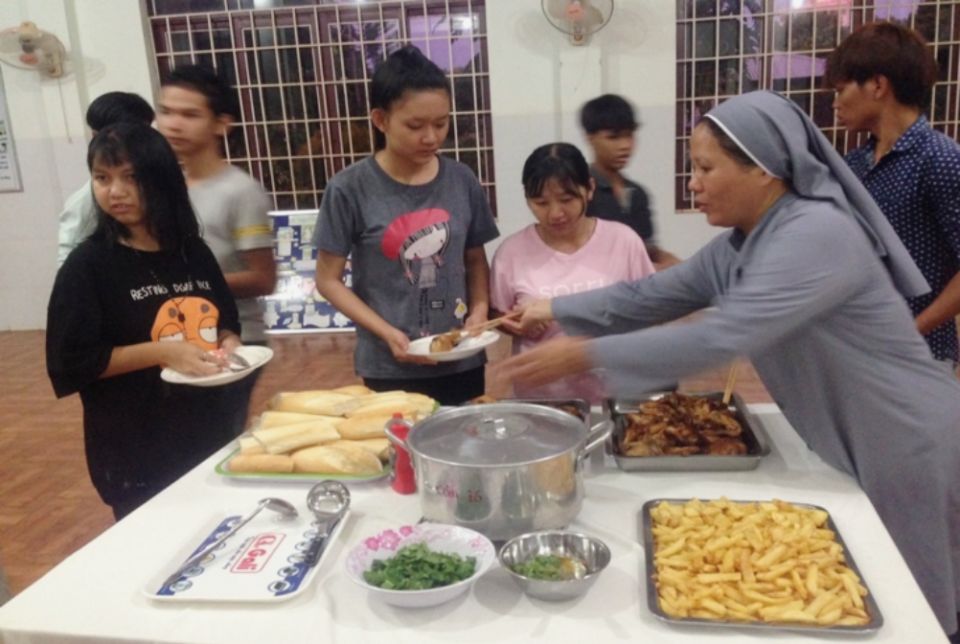 As the dinner bell rang and we approached the dining room, children started filing in. I was moved to tears by what I saw. Visually impaired children lined up with arms outstretched touching the shoulders of the student in front of them, led by the hand of a grinning student with a deaf/mute disability. Once inside, these students assisted those with blindness to find their seats at the tables.

As we ate, I learned about the Vi Nhan School. It is not simply a boarding school, but a "home of love" for these children. They receive physiological help but also spiritual, mental, emotional and educational services that will one day lead them to be financially independent and receive the respect they deserve. They make positive contributions as productive citizens.

I was amazed at how the 11 sisters and 22 full-time and five part-time teachers lovingly wear the "hats" of parents, teachers and friends to the children. The amount of patience needed is almost unimaginable. Daily routines of personal hygiene, laundry, dishes, cooking, feeding, and maintaining the indoor and outdoor facility alone take a lot of time. There are also academic classes required.

Practical skills training is also part of the day: wood-carving, painting, sewing, knitting, massage therapy, music on keyboard, guitar and drum. Many of the students continue on to high school and even university to become teachers or other professionals, get married and raise their own families. 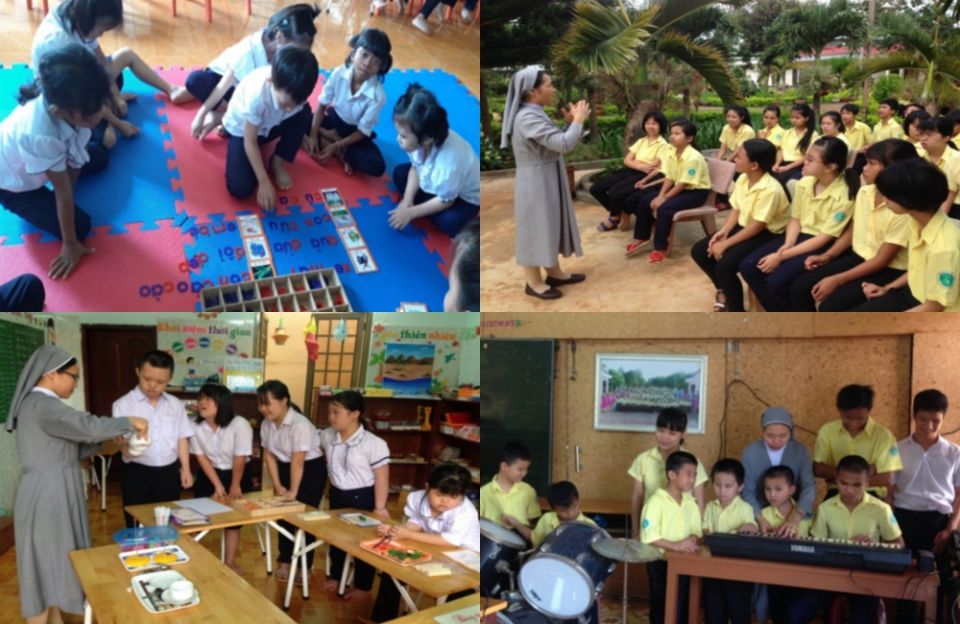 Another amazing story I heard was about Long. Long, also blind, did not excel academically, so Sister Elisabeth sent him to learn massage therapy, where he found his calling. He became so skilled that he asked the sisters if he could open a massage parlor in one of the classrooms.

He started as the masseuse and manager. It was a struggle to know how much to charge or how to manage the finances. Being blind, he had no idea what fees, if any, were paid to him. Finally, he settled on 40,000 dong per hour (a little less than $2) and hired his deaf/mute friends to work with him to collect the fees.

Some customers tried to run away without paying anything and this was a problem for the deaf/mute workers, who could not scream loud enough. But together they worked out the needed systems, and now at age 26, Long has 30 employees, some of whom he trained in massage therapy. He married and has a son.

We heard many inspiring stories about the successes of these children, who in the beginning of their lives did not have much hope. Being with these sisters who carry on such a challenging ministry, I am convinced that the greatest disability in life is "not loving" and "not knowing love." I went home feeling grateful to these sisters who work so tirelessly with children often abandoned by our society.

[Anna Le Bach Tuyet is a Sister of the Lovers of the Holy Cross of Qui Nhon, Vietnam. She recently assisted in the development of Congregatio Jesu Caritatis, a new diocesan congregation of Qui Nhon Diocese, and is currently studying pastoral communication and journalism in the Saigon Archdiocese.]

A single scholarship educated 400 children in a Kenyan slum