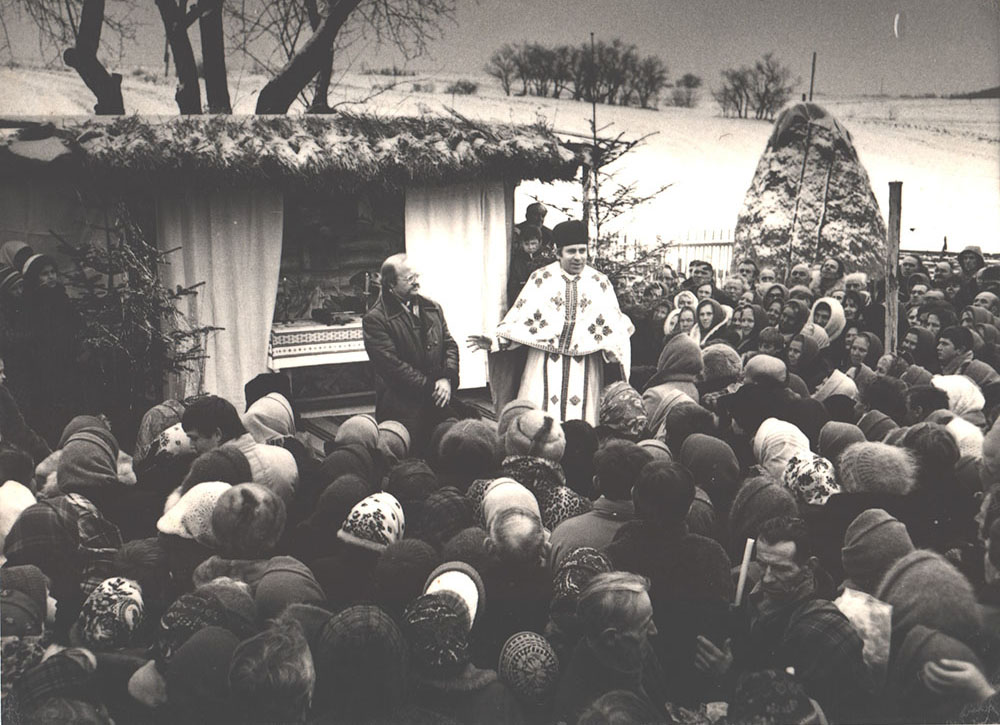 My grandmother had a notebook in which the whole Divine Liturgy of the Eastern Catholic Church was transcribed in large, neat letters, as well as church songs. As a child, I didn't wonder why there was a need to copy a liturgical book. I was born in 1986 in Western Ukraine, when the Ukrainian Greek Catholic Church was still underground. My grandmother sometimes took me with her to the Orthodox Church, which was allowed to operate by the authorities.

In 1989-90, the church in Ukraine was legalized and free to worship publicly. I remember full churches and numerous people participating in liturgies with a great enthusiasm.

But even then, for a long time, the only religious books in our house were the old prayer books in Church Slavonic, and my grandmother's notebook. As a child, I was jealous of a boy who had a new prayer book in Ukrainian. I won my first Bible at a school competition in 1999 and was very proud of it. Religious books were precious! 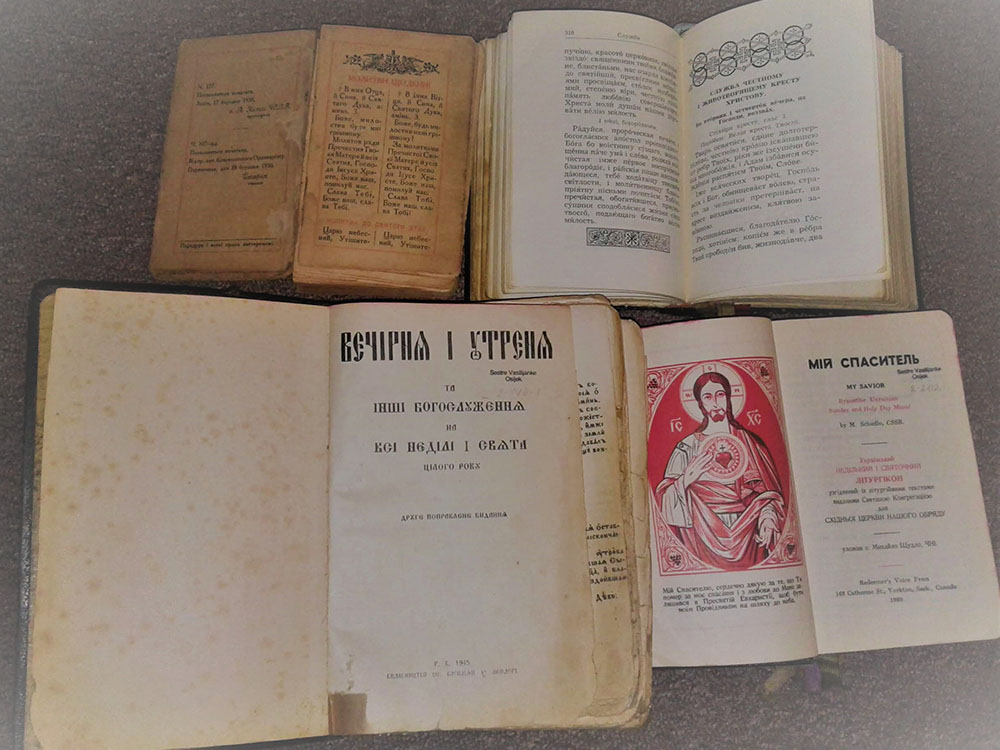 In 2008, I entered the Order of Sisters of St. Basil the Great in Croatia. To my surprise, in the monastery's museum I saw albums with photos of liturgies in the villages and towns of Western Ukraine, both in the time when the church was underground, and in the period of coming out from the underground.

The scenes echoed my childhood memories: crowds of people at the first open liturgies, flying both church and national flags. The sisters told me that in the late 1980s and early 1990s, they sent hundreds of religious books to the Ukrainians thirsty for God's word. 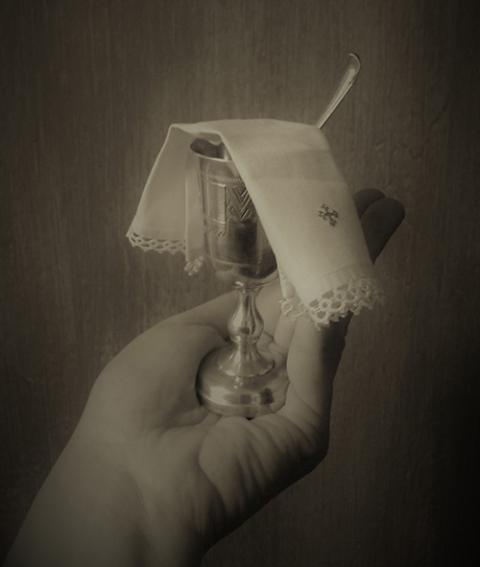 A miniature chalice from the time of the underground Ukrainian Greek Catholic Church (Courtesy of Basilian Sisters' museum, Osijek, Croatia)

The Basilian Sisters came to Croatia from Ukraine in 1915. In the late 19th and early 20th centuries, thousands of Ukrainians left their homeland in search of a better life. Thanks to Metropolitan Andrey Sheptytsky, priests and nuns followed the exodus to support their people, and the community of Basilian Sisters in Croatia developed and grew.

In 1951, the monastery in Osijek (Croatia) became the center of the European Province of the Order of St. Basil the Great.

It seems that the Lord — as in the story of Joseph of Egypt — wished to save his people, and sent his representatives to another country. While fierce communism prevailed in Ukraine, the Ukrainian Greek Catholic Church was liquidated (1946), and most of the clergy were killed or imprisoned.

The Basilian Sisters in Yugoslavia were able to preserve the traditions of their order in Europe, staying ready to bring the light of Christ back to their homeland at the appointed time. They watched the life of the underground church in Ukraine with love and interest, trying to correspond with underground nuns and priests.

In 1985, Srs. Anastazija Pitka and Olga Gogora established contacts with the clergy in the underground. At the suggestion of Fr. Ivan Datsko, the secretary of Cardinal Myroslav Lyubachivsky, the head of the Ukrainian Greek Catholic Church, Pitka and Sr. Terezija Sapun visited Ukraine in 1986 for five days as tourists and met with bishops and priests. 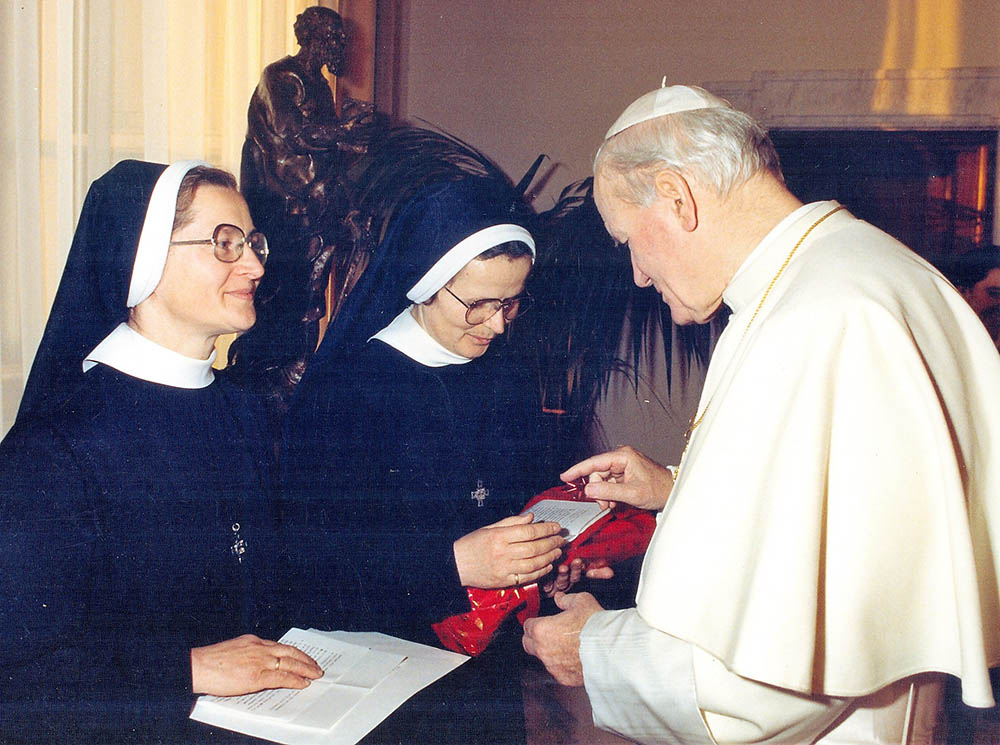 During 1985-90, sisters visited Ukraine at least twice a year. Of course, as foreigners they were tightly controlled by Soviet authorities. As tourists, they were forbidden to go further than 15 kilometers from their hotel in Lviv.

With the help of a pious woman — a relative of a Greek Catholic priest in Yugoslavia — the sisters searched for underground priests and bishops in Lviv. It was not easy because they were constantly monitored by the KGB. Short meetings with underground priests were often arranged in the park or cemetery to avoid the attention of police.

Sisters visited underground Archbishop Volodymyr Sterniuk and Auxiliary Bishop Filemon Kurchaba. Then information was carefully passed on to the Ukrainian Church authorities in Rome for helping to establish connection with the Ukrainian underground church. 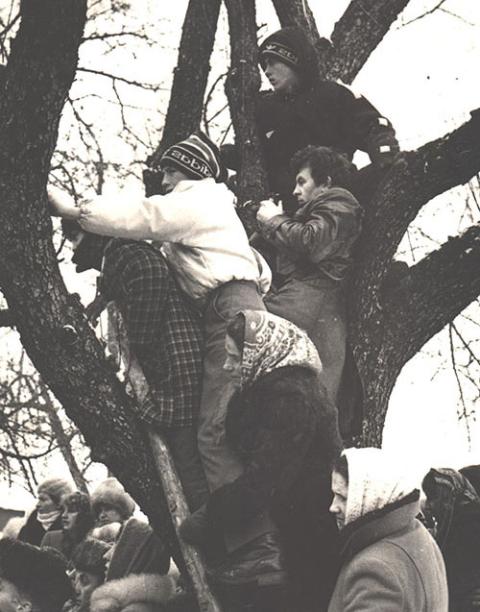 As in the Gospel account of Zacchaeus, people climb trees to see during a Ukrainian Catholic liturgy in the village Tserkivna, Ivano-Frankivsk region, Ukraine, 1989. (Courtesy of Basilian Sisters' museum, Osijek, Croatia)

Sisters said that the trips to Ukraine were risky, but they also brought God's special blessing. More than once, they miraculously managed to escape the KGB officers who were watching them at every turn. Every crossing of the Soviet border was accompanied by humiliating searches for the transfer of religious objects. Transferring holy Scriptures, prayer books, spiritual literature and rosaries was forbidden and threatened with imprisonment.

At the same time, the hospitality of the laity and the underground liturgies in ordinary small apartments were extremely touching. Sapun told about a time that the Sisters of the Holy Family wanted to entertain guests from Yugoslavia with a small concert. So, the nuns gathered children from Greek Catholic families in one apartment in Lviv — and as soon as the celebration began, the doorbell rang. Fortunately, the hosts did not answer the door so as not to betray their guests.

In 1987-89 when the communist regime weakened a little, the Basilian monasteries in Yugoslavia (particularly in Novi Sad), got numerous visitors from Ukraine. Sisters sent religious and theological literature to Ukraine, established contacts with many bishops, priests, Basilian and other congregational sisters.

In 1988, the Constitutions and General Directives for the Basilian Sisters were sent into Ukraine for the first time. Sisters in Yugoslavia received religious literature from Rome and then sent it on to Ukraine privately. For example, in April 1989, 500 Bibles, 350 catechisms, 250 prayer books, 250 New Testaments, and 50 copies of The Life of Jesus Christ were brought to Yugoslavia from Italy. 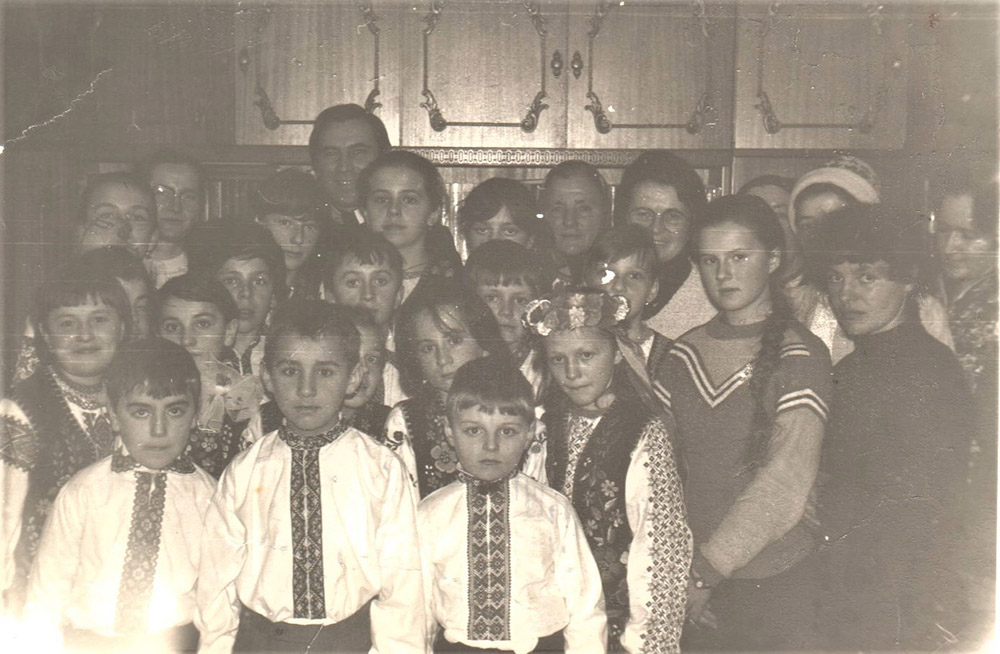 Children's concert after an underground liturgy in Lviv, Ukraine, 1989. In the background is Fr. Matej Havryliv, Ukrainian Catholic priest, the Basilian Sisters Sr. Anastazija Pitka and Sr. Terezija Sapun, and the Sisters of the Holy Family. (Courtesy of Basilian Sisters' museum, Osijek, Croatia)

Cardinal Josyf Slipyj used to collect hundreds and thousands of copies of religious literature in Rome. When Sr. Yaroslava Graliuk asked him why there were so many books being printed, the cardinal answered: "Dear sister, you will see that when Ukraine becomes free and the borders open, it will all be like a drop in the ocean."

His Beatitude's words came true, and the Basilian sisters from Yugoslavia were destined to become "postmen" of God's word for the church, when the ban was finally lifted after 70 years.

After the legalization of the Ukrainian Greek Catholic Church in Ukraine, the sisters from Yugoslavia worked to restore the monastic institutions and share their experience: They helped the Basilian sisters in Ukraine prepare for catechesis and learn to sew habits. In 1992, Pitka was appointed the directress of novitiate in Bryukhovychi. 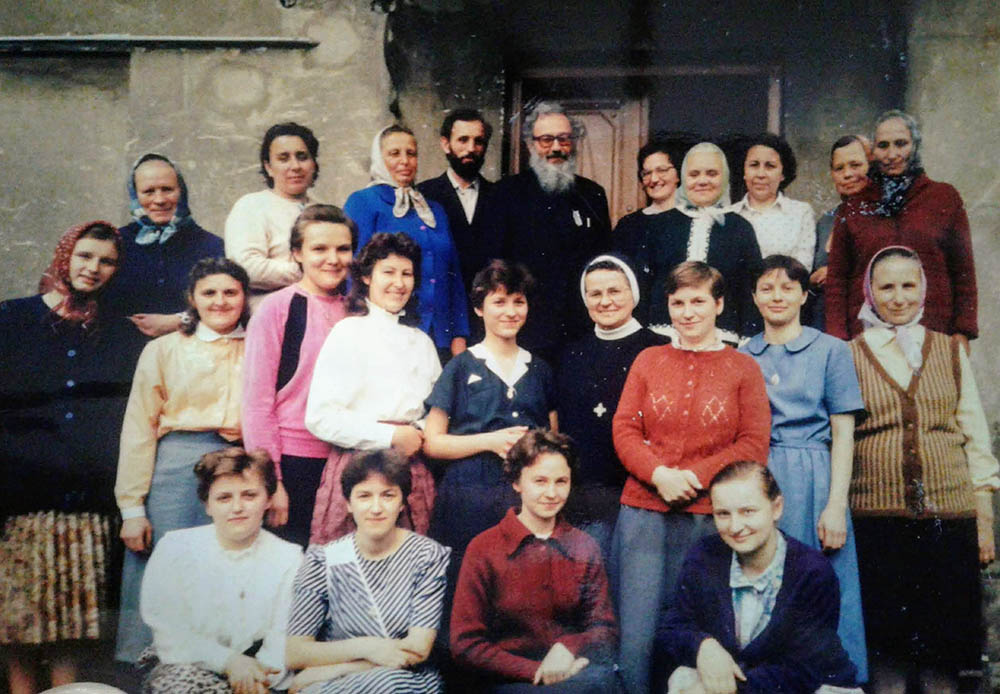 The sisters also contributed to the theological education of Ukrainian priests. In 1990, with the approval of Bishop Irynej Bilyk from Ukraine and Bishop Kyryl Kos, the sisters helped seminarians from Ukraine begin their theological studies in Yugoslavia. In 1991, 30 priest candidates from Ukraine came to study in Zagreb and Djakovo.

The work of the sisters was not limited to Western Ukraine: In 1993, Basilian sisters from Croatia (former Yugoslavia) opened their mission in Kyiv, the capital of Ukraine. After 28 years, the mission is still active with rich pastoral activities. It was there that I met the Basilian sisters, as did other sisters from Ukraine who now serve in Croatia.

The story of the Basilian Sisters in Croatia and the former Yugoslavia is a true history of salvation, a history of God's providential ways, and a testimony that each of us in God's hands can become an instrument of truth and peace, the engine of great historical events.