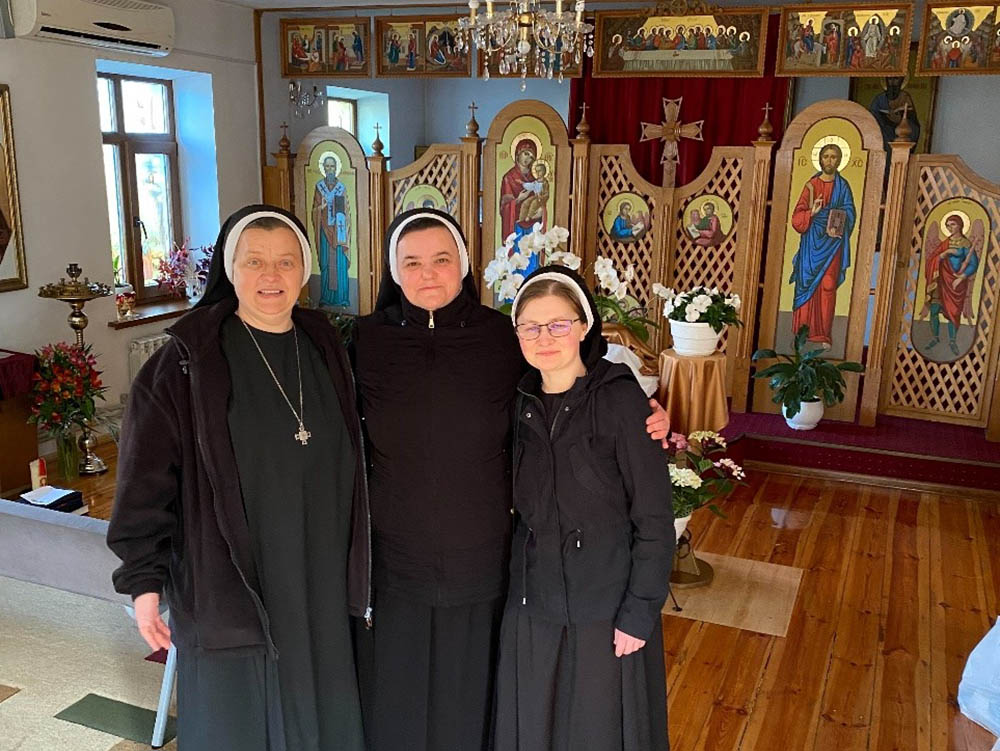 Basilian Sr. Teodora Kopyn, center, with other Sisters of St. Basil the Great from eastern Ukraine (Courtesy of Teodora Kopyn)

My humanitarian mission trip to Ukraine began on April 16, 2022, as I boarded a free "mission" train headed for several major cities in the east. The conductor told me that from the beginning of the war, he has been transporting refugees. He has had many close experiences with the bombings. He said it was dangerous and frightening at times for all!

My many train rides across Ukraine were filled with air sirens and bombings in the distance. Each time we went through villages in eastern Ukraine, we were met with an eerie silence and total darkness, because lights were forbidden. One major city was bombed on the day before we arrived, as well as after we left.

Our last stop on the way to eastern Ukraine was the most dangerous, and instead of our planned 10 hours there, we had to leave after only eight hours. In this city, as well as in others, we saw and heard extremely close explosions.

On the way back, our train stopped to pick up many families with children. They were crying inconsolably and wanted to return home. So many people wanted to share their stories with me. Many told me that their apartment buildings had been bombed, but that they were so grateful to have made it out alive. Other people were not able to tell their entire stories and I could see much pain in their eyes. 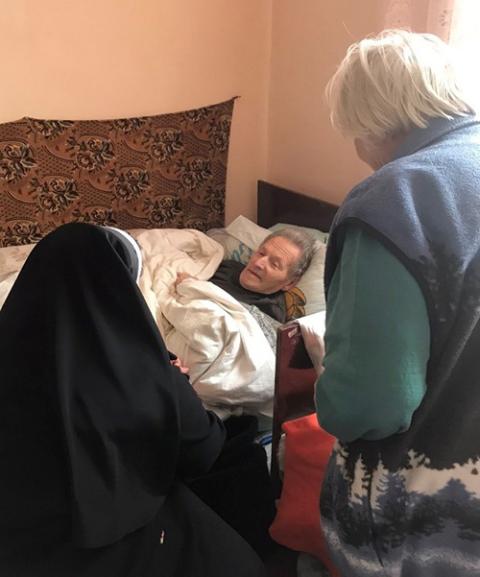 Basilian Sr. Teodora Kopyn visited and prayed with those who had fled from their destroyed cities in Ukraine. (Courtesy of Teodora Kopyn)

I felt so helpless when I could not comfort them. But on the train, I was able to purchase some food and distribute it to the passengers. When I gave some crackers to an elderly man, he kept repeating, "For me? For me? For free?"

On our return trip, which was extremely long, we heard that the next train station had just been bombed. The delay was long and made everyone feel even more anxious.

The next day, I traveled to see our sisters in another section of eastern Ukraine. The driver of a small van accompanied me and some other people. We first stopped to visit an organization in western Ukraine that was helping all refugees in need. Because it was a few days before Easter, they gave us all kinds of Easter foods for those in the east.

During the trip, our driver suddenly said, "Now we'll pray the rosary." To see a grown man with a rosary in his hand and to hear him praying with emotion and hope reinforced my belief in how powerful prayer is. This gave me (as well as my driver) solace and hope.

When we reached our destination, it was early morning. One of our sisters met me and she was in tears — thrilled that I had come from so far away to visit them. The sisters there were working hard to help anyone and everyone in need: caring for refugees, helping at the hospital, and especially helping the military who came to them.

Sister told me that the Russian troops were now only 40 kilometers away. When the war first began, most of the people had fled, and so her city had become a "ghost town." Though people were beginning to return, it still remains unsafe because of frequent bombings. I myself heard the sirens there many times.

On our way back west, we met a woman who was fleeing from her village, which had been totally destroyed by the Russians. She said that she had just left her apartment to do some quick shopping. When she returned, she found that her entire building was gone. She tried to run to two other family residences but found that they had also been destroyed. She was now on her way west, where she hoped to meet a volunteer who would help her.

We picked up refugees who were most in need, to take them to western Ukraine. When we came to one rest stop, the sirens sounded and the driver said, "We must leave quickly!" Everyone was terrified, but it was especially difficult to see the children so afraid, not knowing what would happen to them. The sound of sirens made everyone live in fear each moment.

The next day, I visited the main monastery, where our sisters were caring for refugees and helping so many people. Our sisters in one city had 30 refugees in their monastery, and another convent was also housing about 30 refugees. All our dear sisters, in every region of Ukraine, continue to aid refugees in whatever way they can. May God bless them all!

Upon my return to western Ukraine, I learned that the volunteers there were all out of food and medicine. This was the first stop for refugees from the east as they approached Europe's borders. So, the next day I went shopping. The children literally ran to the table where we displayed our purchases, and were thrilled to have fresh fruit, like apples and bananas — it was heartwarming to see their happy faces. 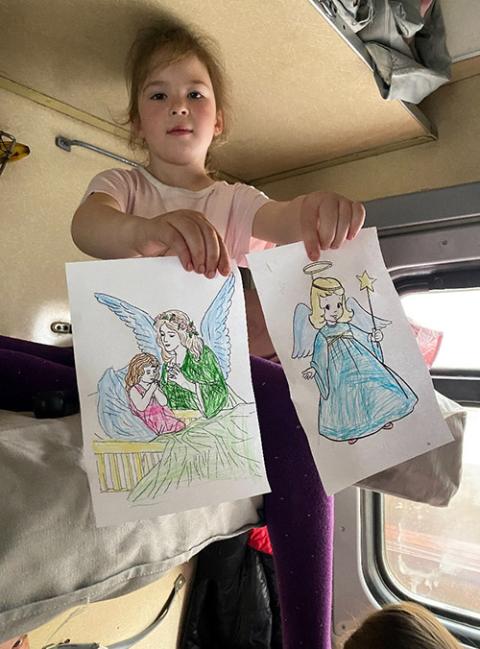 One of the many children fleeing from eastern Ukraine. Basilian Sr. Teodora Kopyn had given them colored pencils and pictures she had printed. She convinced this little girl to color angels instead of the devil she had first drawn to represent the war. (Courtesy of Teodora Kopyn)

I was also glad to visit several organizations where volunteers were aiding many refugees who had fled their destroyed cities. All of them were so grateful to be safe, and especially grateful for all the kindness they were receiving there.

I shall never forget the many stories of horror and pain I heard, the many people who asked for prayers and needed some consolation and comfort, the many who lacked food, the military who were in dire need of protective items, and the many women who learned of their husbands' deaths.

I will never forget one woman, crying at a train station, who kept repeating as she held her two small children, "I want to go home. Why must we run away? Where are we going?" Her husband tried to comfort her, but no words would help. It was so heartbreaking to see!

The entire country of Ukraine is suffering. All are filled with fear, and worried about their loved ones.

But during my travels throughout Ukraine during this mission trip, I also saw much beauty still left — fields full of flowers blowing in the wind, and people tending to their gardens and trying to keep their tiny villages neat and clean. I cannot imagine anyone wanting to destroy this beauty, and my heart breaks daily as I hear how the enemy continues to persecute my beloved people and their land.

When I left Ukraine, I told my mother goodbye and then boarded a plane back to the U.S. My mission trip had ended. It was important for me to have been present to so many who were going through these hard times. I am so grateful for this opportunity.

Here in America, as I work with homeless people, I feel their pain. I understand how hard it is for them not to have housing or food. Their pain is like and yet totally different from the pain felt by the people in Ukraine. Ukrainians must flee for their lives, suddenly leave their homes without anything, and the most terrifying part is that they are not sure if they will even have a future.

Please, dear Lord, bring a speedy end to this unjust war, and let my people live in peace!