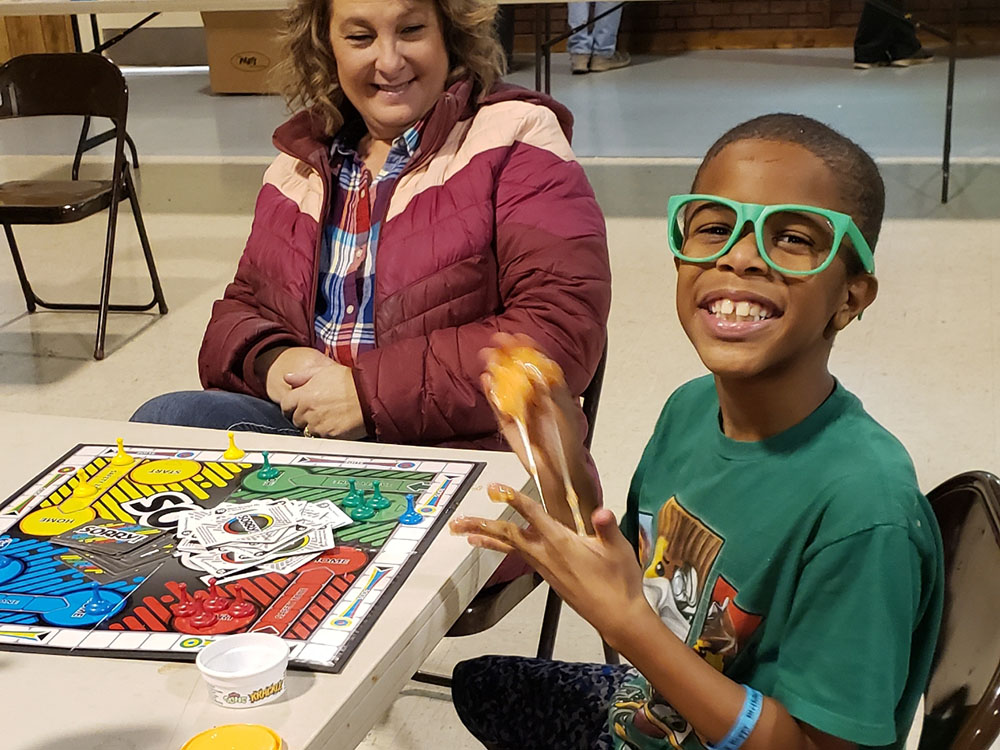 Shane, age 7, enjoys some attention two days after his family lost everything when the tornado swept through Graves County, Kentucky, on Dec. 10, 2021. He claimed the green sunglasses to help him cope and created a fun exchange with our volunteers. (Courtesy of Martha Keller)

It is more than three months since that Friday, Dec. 10, 2021, when the tornado swept through Graves County, Kentucky, leaving behind a path of destruction, shock and chaos. It is unbelievable! You see it on television, but when you gaze on it with your own eyes, your heart breaks and your tears flow.

This has been my experience and the harsh reality of so many women, men and children who were affected by the power of nature. I definitely would not call the tornado an act of God, but since then God has been acting in my own heart and in our local community. The outpouring of love, support and compassion is truly God at work and church at its best.

As I continue to respond to the daily requests of tornado survivors from the town of Mayfield, Kentucky, I am in awe at how resilient the children are in spite of the agony of a family 's dream destroyed or perhaps placed on hold. I witness the pain on a mother's face as she shares her story of loss and grief, and the determination of a father to pick himself up after being knocked down again and again, even before the tornado.

"How are you doing?" is a question that has no response. The numbness and feelings of being overwhelmed continue to surface for anyone affected and attempting to hold their lives together. The immediate response of generous financial support, supplies and listening hearts have slacked off, but the tornado relief continues. The needs continue to rise, and life is anything but normal. 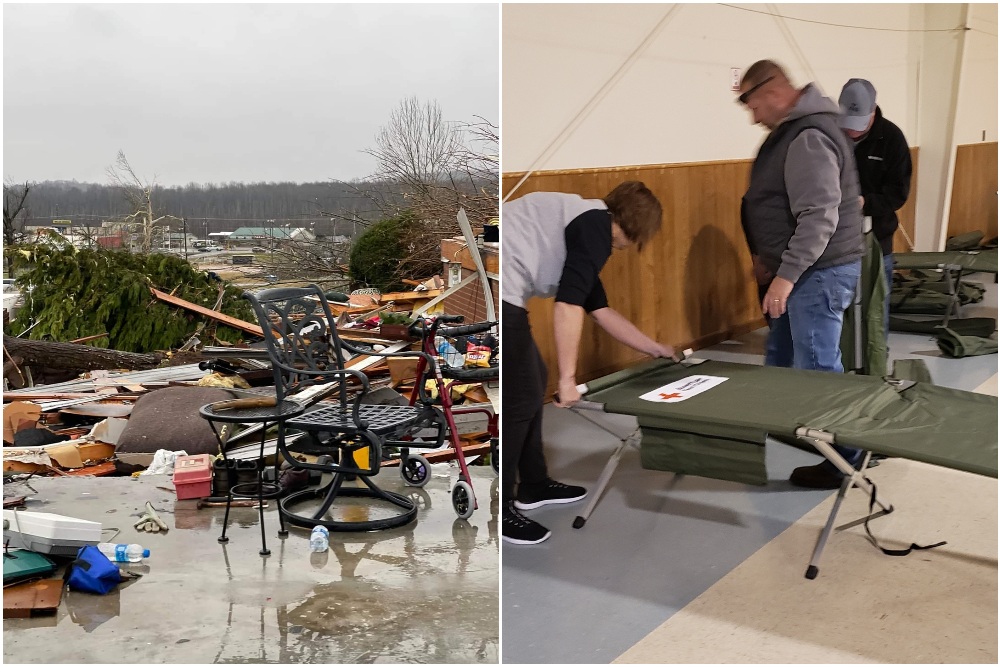 Left: What is left of a home in Mayfield, Kentucky, after the tornado destroyed everything on Dec. 10, 2021; the rain then damaged what could have been salvaged. Right: The Red Cross sent 40 beds to set up on Dec. 11, 2021, for a temporary shelter at St. Jerome Church in Fancy Farm, Kentucky. (Photos courtesy of Martha Keller)

Personally, I believe that I am called to be an instrument in God's hands and that God is using me to be the face, hands, feet and eyes of something greater than any destruction by a tornado. My prayer has been powerfully impacted as I place in God's hands those who share their pain, and I have no answers, but I know God loves them and has a plan for their future. Jeremiah 29:11-14 has become my daily mantra:

For I know well the plans I have in mind for you — plans to prosper you and not to harm you, plans to give you hope and a future. Then you will call on me and come and pray to me, and I will listen to you. You will seek me and find me when you seek me with all your heart. I will be found by you, and will bring you back to the place from which I carried you into exile.

Just last week, one of the families which we sheltered returned asking for help with medical needs for the mother and father. This family — with children ages 7 years, 9 years, and the youngest of 18 months — has been relocated for the fourth time. Their son remains an inspiration to many of us.

On that first day in our temporary shelter, he rummaged through toys and pulled out a pair of bright green sunglasses, punched the lenses out and placed them on his 7-year-old face as he spoke the words of a sage: "Look, I can see clearly now!" with a beautiful smile and acting as if he did not have a care in the world. It was exactly how a young boy needed to be at that moment. 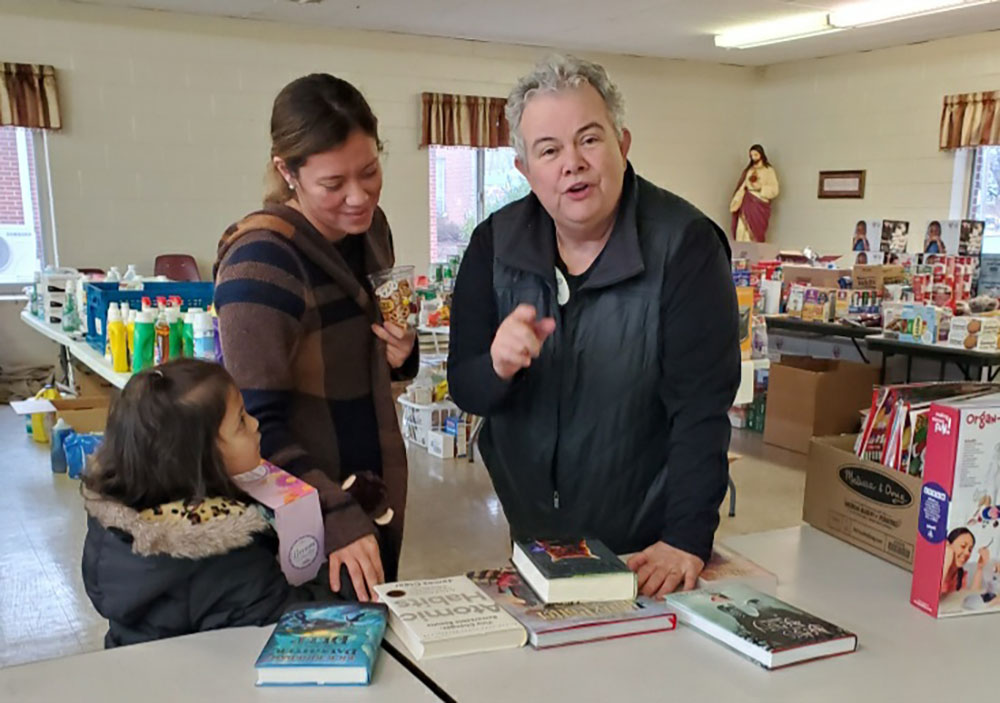 Ursuline Sr. Martha Keller, left, and Maria, a Hispanic tornado survivor, make a plan for her to celebrate Christmas with her young daughter. (Courtesy of Martha Keller)

Those words gave our group a sense of purpose as we were still frantic and exhausted in trying to provide a bed, clothing and a meal for families who were standing before us with nothing but the clothes on their back — clothing that was soaked by the rain that followed the tornado.

Yes, God, I can see clearly there is a plan. Use me.

Through the weeks and months of serving in tornado disaster relief, I have encountered some beautiful souls, and have allowed myself to be changed and transformed by their faith and perseverance. Indeed, I have lost time that I would have spent in gathering with family, religious community and friends, but I believe I have embraced wholeheartedly the Gospel mandate of serving those without a voice. "Whatever you do for the least of my brothers and sisters, you do for me" (Matthew 25:40).

One survivor mustered all she had to deal with her reality. Standing as a valiant warrior, she stated with conviction and deep faith, "In less than one minute, I literally lost everything I had. But God is good. My family is still here, broken and devastated but we have each other, and good people to help us through this stage of our recovery." 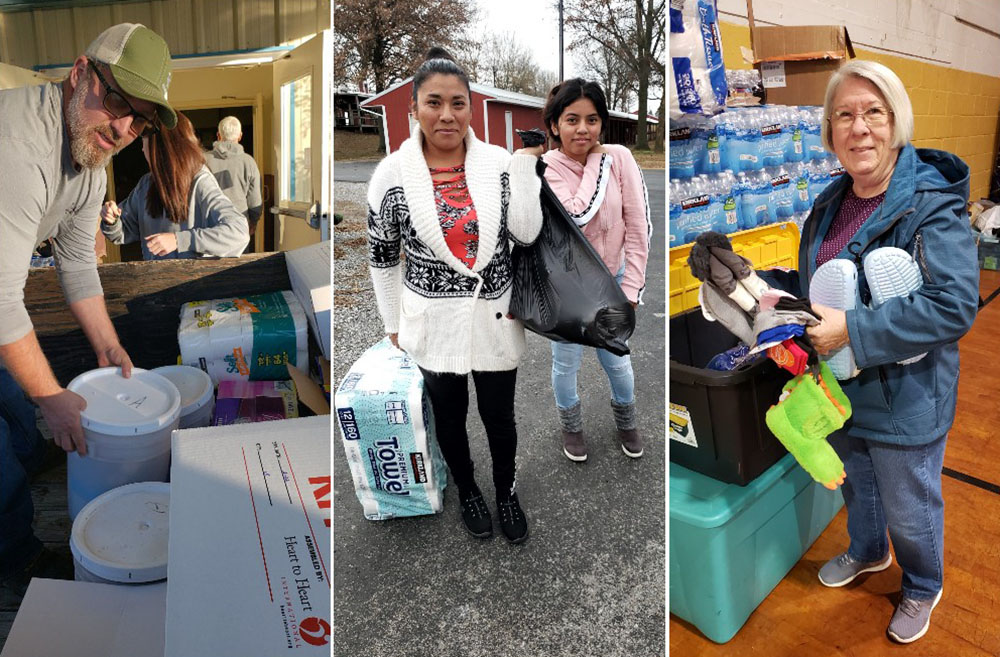 And one of my favorite stories was on our local news and later hit the national news. It is just another reminder of all the goodness and "heroes" in this disaster.

Marco Sanchez, an inmate of the Graves County jail, was working at a work-release program at the Mayfield candle factory when the EF-4 tornado collapsed the building on top of about 100 people.

He heard wind, his ears were ringing, and he lost his balance when the walls caved in on him. Regaining consciousness, he found himself trapped in the rubble, alone. Running on adrenaline, he dug his way out in spite of a broken leg and cracked ribs.

Sitting on top of the collapsed building by himself, in the dark, he wondered what he should do. Nobody was around, and he was not sure he was alive himself. "I thought maybe I had died and was working my way up to heaven," he said.

But when Sanchez decided he was alive, he started looking for other survivors. He found a girl crying for help. He said that — not having experience rescuing people — he just used his common sense.

Later presenting him with a plaque, the Graves County sheriff called him a hero for saving lives. Sanchez has been overwhelmed with all the praise, saying that it has helped him believe in himself. He had been serving a year in jail for stealing a phone, and at first when he was offered shock probation he refused, wanting to finish his sentence and debt to society.

Now he has been released from jail after serving the full year, and says he wants to stay in Mayfield to help with the rebuilding. The sheriff is helping him find temporary housing, and a sister he has not seen for 15 years had a Zoom reunion with him when she saw the news.