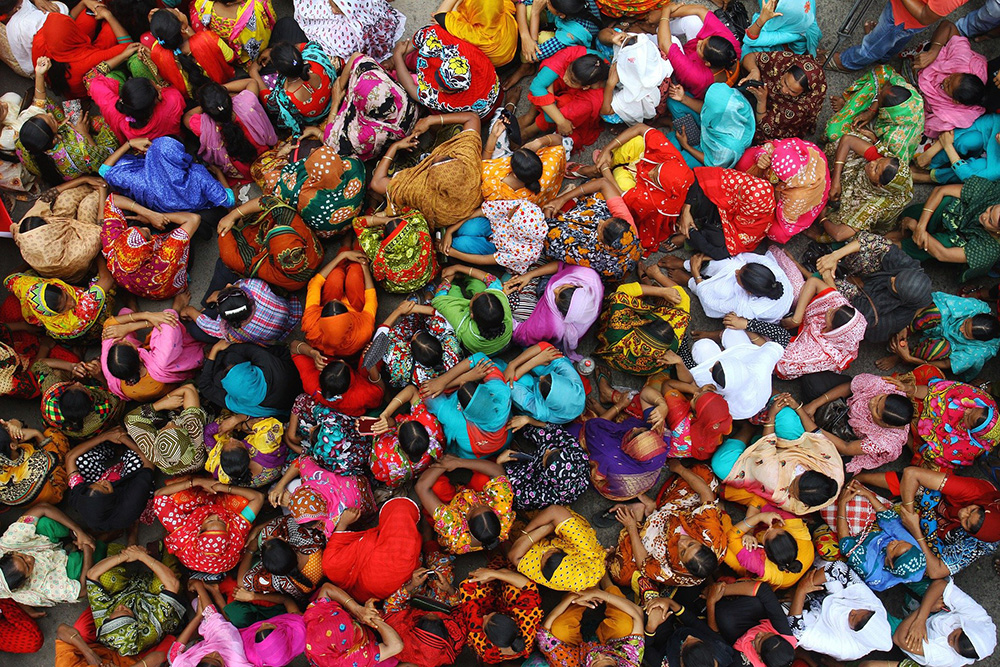 In my 2005 doctoral graduate paper on "Setting Free to Set Others Free - Empowering the Women Religious of India" I asked a question: When will the "Women Religious — a Sleeping Giant" wake up for the radical formation of women religious?

One of the signs that rekindled my hope that the sleeping giant is waking up was when Franciscan Sr. Sheila Kinsey, campaign coordinator for the International Union of Superiors General campaign Sowing Hope for the Planet asked me to be one of the speakers for their October 2018 webinar.

Another sign was the invitation of Justice Coalition of Religious, or JCoR, to participate in capacity-building workshops and advocacy efforts among its member congregations, to improve the efficiency of the sisters and to strengthen their influence on the United Nations system.

The fact that laywomen were the coordinators and the resource persons were learned women and men with field experience made an immense difference in achieving the objectives of the Mumbai workshop Jan.16-18, 2020: standing on common ground to respond to the common issues and the one common prophetic call of all charisms — to bring about long-term systemic change by effective implementation of the Sustainable Development Goals.

After these above two events I began noticing the change among the participant sisters: they are more vocal. Though small in numbers, they now show up readily at any protest meetings or rallies — leaving behind the "permission culture" — and signing online petitions for needed reforms on civil and ecclesiastical levels. It's a loud and clear sign of the "Silent Giant" becoming the "Roaring Lion"!

This type of ongoing formation has begun to dismantle the barriers among secular and religious women. Though consecrated women in India are on the forefront for social justice, not many have needed education or formation to "speak truth to power" with confidence.

I consider the JCoR training a timely intervention with feminine perspectives. There is a clear change of focus from "charity of immediate needs to charity of systemic change."

In her famous book, The Fire in these Ashes, Joan Chittister writes a fitting parable:

A pilgrim was walking along a road when one day he passed what seemed to be a monk sitting in a field, near men working on a stone building.
Pilgrim: You look like a monk.
Monk: I am that.
Pilgrim: Who is that working on the abbey?
Monk: My monks. I am the Abbot.
Pilgrim: Oh, that's wonderful, it is so good to see a monastery going up.
Monk: We're tearing it down.
Pilgrim: Tearing it down? Whatever for?
Monk: So that we can see the sun rise at dawn.

This sowing of seeds will help us tear down the walls that separate us versus them, religious versus lay, holy versus unholy — and will be able to witness the dawning of a new era of consecrated "Vasudhaiva Kutumbakam" ("the world is one family").

Instead of lamenting the lockdown of church, mosques, and temples due to the coronavirus, one should appreciate this time for the immense benefits it has gifted humanity, especially the justice it is doing for the universal family, including birds, fish, stones and air. Though the gloom of COVID-19 can easily lead to despair, we need to heed the pithy saying: "Despair is a luxury that we can ill afford." We need to say our goodbyes to old ways, by sowing seeds of something new for "Our-Big-Story" and no more "Tiny-His-Story."

Dear Superior Generals, with rightful respect for the responsible position you hold to lead your particular congregations, and with true appreciation for the JCoR initiative, you have much more capacity to form consecrated women. To dismantle the unhealthy walls that keep us aloof, I would like to suggest the following way of ongoing formation.

I have been reading about loyal critics like St. Catherine of Siena. As Joan Chittister says, "When religious life for women was defined by cloister and depended on the common life for both its credibility and its legitimacy, Catherine of Siena ignored the demands of categories that did not work for her and turned an association of semi-cloistered widows into an alternative style of religious commitment."

One is struck by the tremendous courage of Catherine who reprimanded two Popes. Robert Maloney wrote in America about how she managed to convince Pope Gregory XI to return from Avignon to Rome saying, "Don't be a fearful child, but a grown man," and was straightforward enough to tell his successor Urban VI to control his temper.

One of the first women declared to be a "doctor of the church"— undoubtedly a political prophet — she negotiated between city and state, and became an emissary to the state from the Vatican. Despite innumerable obstacles, she was a loyal critic who never quit, a fiery prophet who set the church and world afire.

Today in the midst of multi-religious global community, one cannot be blind to the prophets outside the Catholic Church. If "Catholic" is understood as indicating universality rather than narrow sectarianism, then one will notice that prophets cannot be limited to any particular caste or creed or country. There are myriad prophetic voices calling the sisters to read the signs of the times and follow in the footsteps of Jesus, the prophet:

This is going to be a period of intense turmoil and experimentation, experiencing deaths and resurrections on all fronts. Perhaps the signs of the times in our postmodern world of rapid change call for a radical revisioning of religious formation, promoting radical in-service training of alternative forms of consecrated life as well.

Jesus of Nazareth was a whole, self-realized and completed personality — the epitome of the enlightened man. With the promises of technological progress and the valiant efforts of consecrated persons we will soon achieve the eschatological dream of John 17:21.

If UISG leaders implement JCoR-type ongoing formation programs, in no time thousands of Shiphrah and Puah activists (Exodus 1:15–21) will rise up to defy patriarchal orders for a "forced exodus"— such as the mass deportation of people, or the denial of citizenship for people, through the Citizenship Amendment Act in India.

As the groundswell begins, my humble request to the UISG is "be the gutsiest women of the world, fighting courageously against dictatorship and religious extremism all over the world."

This type of formation can be an exciting adventure for formators and formees, to come down from their ivory towers and joyfully struggle together to transform themselves and the situation around them — saving us from outdated patterns of clinging to patriarchal ways, and lead to a new pedagogy of contextualized approach.