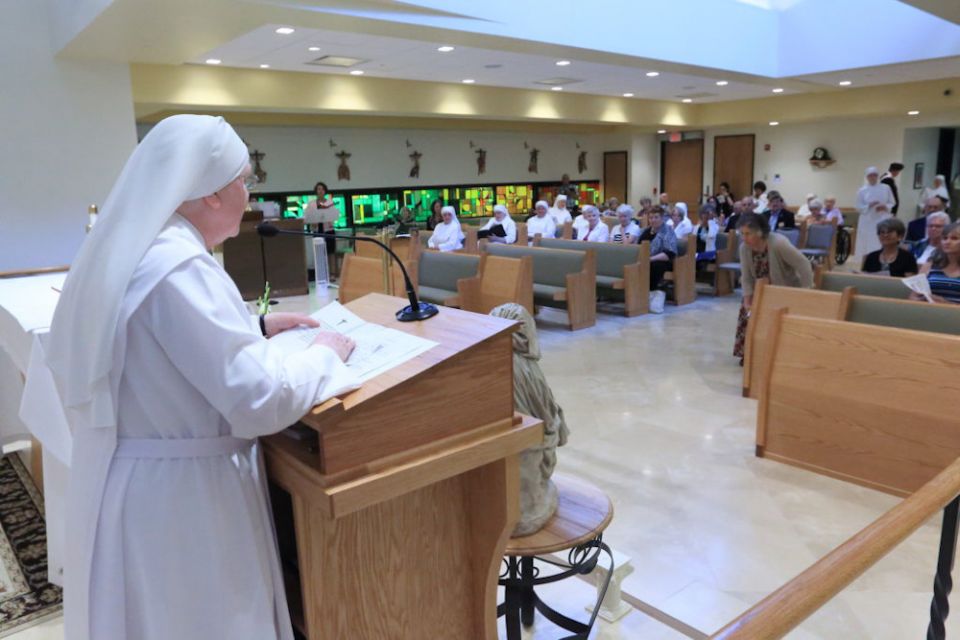 Mother Margaret Regina Halloran is seen July 18, 2019. On March 27, 2020, Mother Margaret, local superior of the Jeanne Jugan Residence in Newark, Del., run by the Little Sisters of the Poor, was grieving the death a day earlier of a longtime resident who had COVID-19. (CNS/The Dialog/Don Blake)

WILMINGTON, Del — A second resident has died as a result of coronavirus at the Jeanne Jugan Residence in Newark, others with the illness are improving and all of the 40 residents who live in nursing units are being treated with the greatest precaution.

This update on current conditions at the residence was provided by Sr. Constance Veit, a Little Sister of the Poor, who is U.S. director of communications for her religious congregation. She reported the update in a March 30 email to The Dialog, newspaper of the Diocese of Wilmington.

"There are several more residents who are showing symptoms of the virus," said Veit. "At this point, everyone in the two nursing units is being taken care of as if they have it, with the highest level of precautions. Obviously, the situation is constantly evolving."

The Delaware Department of Health and Human Services a week earlier responded to a report of the death of Jeanne Jugan's first resident, an 86-year-old male. He had underlying medical conditions, according to the state and Mother Margaret Regina Halloran, the residence's local superior.

At that time, six residents of the Newark nursing home tested positive for COVID-19, according to the Division of Public Health. The state agency said it was actively working with the facility to ensure resident and staff safety.

More than 66 people live at the nonprofit continuing care retirement community run by the Little Sisters, including 40 residents in nursing units.

"There is an ongoing need for PPE (personal protective equipment), especially gowns and regulation N95 masks, but we assume that most people would not have access to this," Veit said in her email March 30. "If there is anyone out there who works in the medical profession or otherwise has any information about how to obtain these, it would be most helpful.

"Otherwise what would be most helpful is monetary donations, which we will apply to getting whatever is needed as the situation arises."

She added: "The greatest thing we need is prayer to ward off the virus and keep our residents and staff safe. Prayers for the staff are very important because without them we would be sunk. They are truly heroic."

The Little Sisters of the Poor sent Veit to Newark from Washington a week ago to contribute the effort to help residents and staff at Jeanne Jugan Residence.

A day after the death of the first resident due to COVID-19, Mother Margaret was doing her best to fight back tears in the early morning of March 27, but she wasn't really winning the struggle.

"It's been pretty tough," said Margaret, gearing up for the day on just four hours sleep.

The 86-year-old man with Philadelphia roots was a popular resident who delighted many over the years by dancing a version of the "Mummers Strut" — a Philadelphia New Year's Day parade tradition.

Mother Margaret said the man's daughter was able to spend 20 minutes with him, and his grandchildren got to see him through a window. He had originally moved to the residence more than a dozen years ago with his wife, who preceded him in death several years ago.

Delaware's Department of Health and Social Services late in the evening of March 26 announced the man's death, which came after he had tested positive. It was the first long-term care facility coronavirus-related death in the state and the first outbreak of positive cases in such a facility in the state. The man who died had underlying medical conditions, according to the state and Margaret.

"We are deeply saddened to hear of this individual's death," Dr. Kara Odom Walker, a practicing family physician, who is secretary of the Department of Health and Social Services Secretary, said in a statement released by her office before the death of the second resident.

"The population who lives in these facilities are at the greatest risk for COVID-19, based on their age and underlying health conditions," she said. "Unfortunately, this death and the confirmed cases at this facility underscore the need for all long-term care facilities in Delaware to follow strict screening protocols for anyone entering their facilities."

Sr. Mary Pellegrino leads in a time that's 'not business as usual'