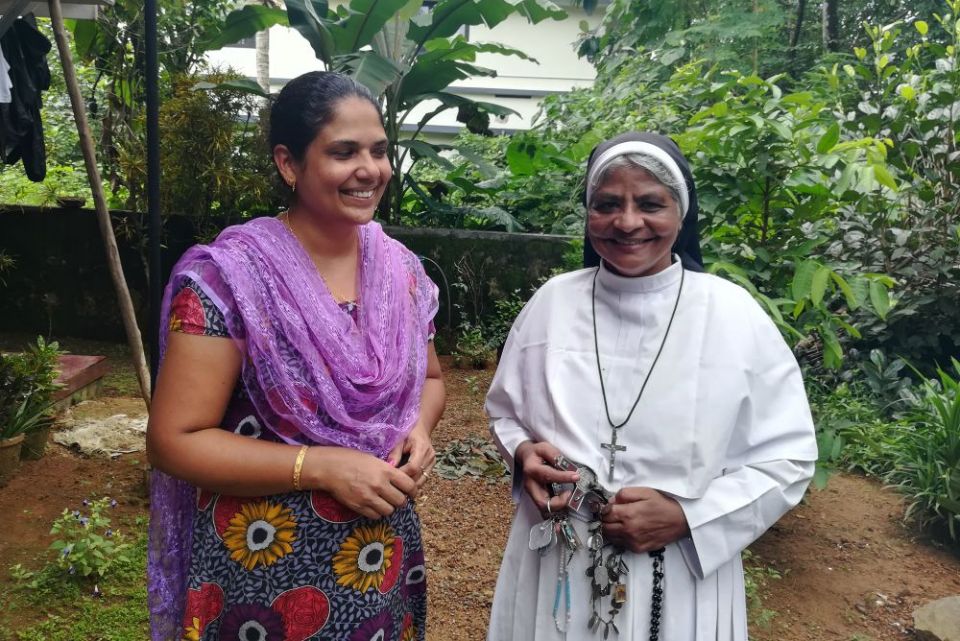 Sr. Lissy Vadakkel, right, a member of the Franciscan Clarist Congregation and a key witness in the nun rape case, converses with Lini Agi, a homemaker and a supporter, in Jyothi Bhavan convent on the outskirts of Muvattupuzha, a town in the southwestern Indian state of Kerala. (Saji Thomas)

Muvattupuzha, India — Sr. Lissy Vadakkel, designated as witness No. 2 in India's nun rape case, says her current priority is to live at least until she can give her statement in the trial that is expected to begin soon in the Sessions and District Court of Kottayam, Kerala. Vadakkel, 56, suffers from a chronic illness and has been under risk of harm since she made an early statement to police about the case.

Vadakkel, who was a charismatic retreat preacher for 24 years, currently lives in Jyothi Bhavan (house of light), a convent on the outskirts of Muvattupuzha, a major town in Ernakulam district of the southwestern Indian state of Kerala.

On trial is Bishop Franco Mulakkal of Jalandhar, who is accused of raping Vadakkel's "spiritual daughter" and former superior general of the Missionaries of Jesus multiple times from 2014 to 2016 in a convent in Kuravilangad, 20 miles south of Muvattupuzha.

Vadakkel, a member of the Kerala-based, 130-year-old Franciscan Clarist Congregation, has been under round-the-clock police protection since April following a court order after attempts by her congregation to stop her from giving witness in the case.

Her superiors were upset with her for not getting their permission before she made a statement to police on what she knew about the allegation against the bishop. They banned her from conducting retreats and abruptly shifted her to another convent at Vijayawada in the southeastern state of Andhra Pradesh, 670 miles northeast of Muvattupuzha. She was confined to her room and not allowed to make contact with family, even her mother in Kerala.

Fearing for her life in Vijayawada, Vadakkel returned to Kerala, accompanied by the Vijayawada superior and another sister, and sought police protection.

Two female police constables now keep her company in the visitors' room of the Muvattupuzha convent, where Vadakkel has lived for 14 years.

Vadakkel shared with Global Sister Report why she gave her statement to the police and about her ordeal since then.

GSR: You have been under police protection since April. How do you feel?

Vadakkel: Yes, this is not a life that I ever wanted. But it is a cross I have to bear until I record my statement before the court. It does not mean that I am scared for my life. If I fail to record my statement, it will be an injustice to the rape survivor. So, I want to live at least until this is done.

You are a charismatic preacher. How did you get involved in this case?

I have been a full-time charismatic preacher since 1995. I have preached retreats for sisters of various religious congregations in India. I have traveled across the country for this purpose. In 2012, I was invited to organize a retreat for sisters of the Missionaries of Jesus, [an indigenous congregation under the diocese of Jalandhar in the northern Indian state of Punjab]. The rape survivor was then the congregation's superior general. I found her a true missionary committed to her vocation. We have been in touch since then and she became my spiritual daughter. We continued the relationship when she came to the Kuravilangad convent as its superior, having completed her term as the head of the congregation. She invited me to give talks to the residents of an old age home run inside the convent premises. During one of our talks, the survivor disclosed about her rape.

What was your response? Did you ask her to lodge a police complaint?

Obviously, I was shocked. I could never imagine a bishop could do such a thing. I, however, trusted her, as I knew her personally well. She also narrated in detail the ordeal she had to go through for two years. I was convinced she was telling me the truth. However, I did not ask her to lodge a police complaint, as I did not know the legal formalities involved in such a case. Being a preacher and counselor, I encouraged her to find a solution through forums within the Catholic Church. She too agreed that was better than going to the police. She did not want to damage the Church's image for the mistake of one man. 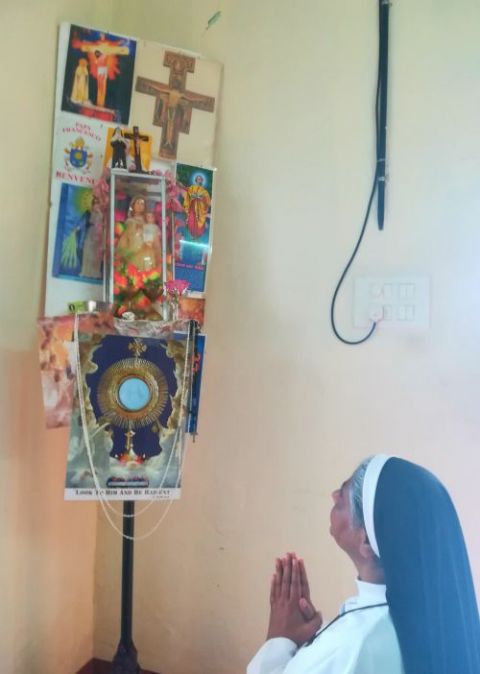 Sr. Lissy Vadakkel kneels before the portrait of an exposed Holy Sacrament she has kept for her daily adoration, as part of her contemplative life in Jyothi Bhavan convent in Muvattupuzha. (Saji Thomas)

How did you became a party to this case?

I had not gone to the police on my own. In fact, it is Bishop Mulakkal who had given my name to the police in one of his communications to them. Based on that, the police questioned me and I narrated the ordeal the survivor had explained to me.

Didn't you foresee the repercussions in giving statements against a bishop in a rape case?

As a preacher, I have always taught people to speak the truth. I only practiced what I preached. When the police asked me about the case, I told them what the survivor had told me without hesitation. To be honest, I never expected that speaking the truth would cost me dearly.

There is still a chance for you to change your stand.

No, no, no. I can't betray the truth. I am a preacher and I cannot go back from what I know and tell lies. I have become a fallen star for my congregation and the church hierarchy who back the bishop accused of rape. But that does not dampen my spirit. I live in police protection as an outcast or untouchable, not for securing my life, but to live until I record my statement in the court.

What will you do after the court proceeding is completed?

I am leading a contemplative life now, praying and seeking God's mercy for the superiors and more than 7,000 members of my congregation and the church leaders. I will continue to do so in the future, too, if my superiors fail to revoke the ban on my preaching. If they don't, I will take it as a God-given opportunity to pray for the entire church. I will intercede with God for the world. I also speak to people about God through my counseling, especially those contacting me by cellphone.

Are you angry with those harassing you?

When I look at the suffering of Jesus on the cross, my ordeals are nothing. Being a preacher, I am bound to pray for all those who persecute me and I am doing it. I have no hatred or anger against anyone. The language of a preacher or a missionary is love not hatred.

Read this next: Stage set for trial of India bishop in nun's rape

Is it true that your superiors denied you proper food, medicine and other basic facilities to force you to withdraw from the case?

It is true. Initially, there was pressure from my superiors to withdraw from the case. I was also denied food and other facilities as a tactic to force me to toe their line. But now they have understood that such things will not impact me. Now I get my food and accommodation, especially after I came under police security cover. But my isolation from the community is complete.

You headed a team of charismatic volunteers. Do they support you in this difficult time?

Of course. We have been a team of 28 members in the ministry. There are some who support my view in the case, and they are with me. Others feel that I should have continued with the ministry, not get involved in the case. Those in agreement visit me occasionally. I too visit some who live nearby. I cannot go to faraway places, as a police officer would have to accompany me.

You were accused of publishing write-ups without permission. What is the truth?

It is true my superiors accused me of publishing my write-ups illegally. In fact, it was my preaching materials, which I used to distribute to the participants in the form of books or pamphlets. It was a routine practice, and everyone in the convent knew it. The superiors found it objectionable only after I gave a statement against Bishop Mulakkal. They also called me a fake preacher and illegal occupant in the convent (Jyothi Bhavan) where I was a member for 14 years. [Jyothi Bhavan is the official house of the congregation's Vijayawada province in Kerala.] However, I pray continuously for the purity of the church through the Eucharist celebrated across the world. 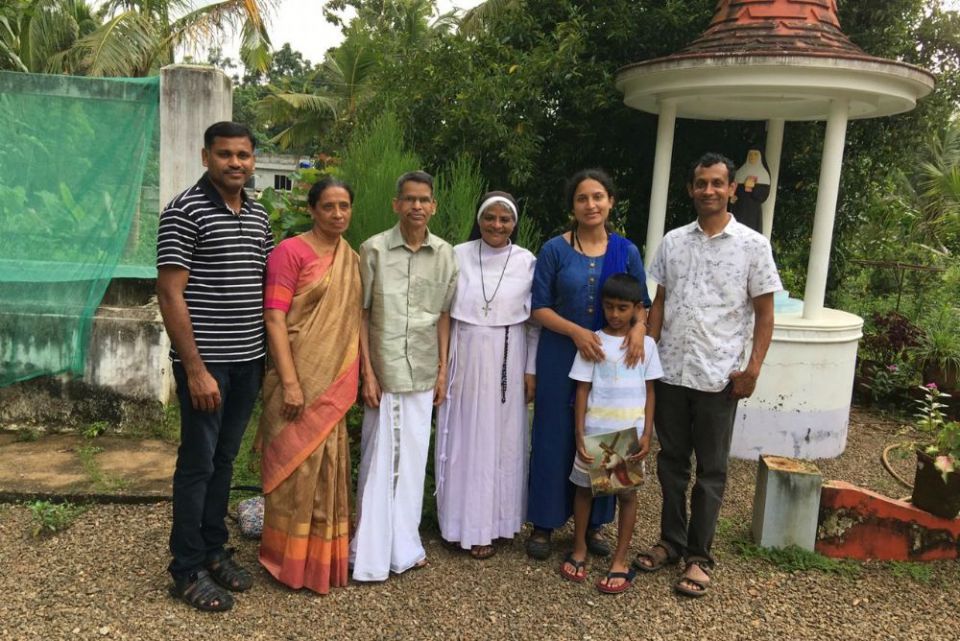 Sr. Lissy Vadakkel, a member of the Franciscan Clarist Congregation and a key witness in the nun rape case, with her niece (in blue, from the United States) and her family who visited her in Jyothi Bhavan convent on the outskirts of Muvattupuzha, a town in the southwestern Indian state of Kerala. (Provided photo)

What do you feel about the church and its future?

Now the time has come for protecting our religion as the leaders of the church and religious congregations work overtime in protecting the image of the church without imbibing the spirit Jesus showed us. They are mostly guardians of the wealth, not the mission and its spirit. The leaders lost fellowship with Christ's disciples or followers. They have the power of office but not the love of Christ, without which whatever they do is only an empty act of discipleship of Christ. It has no depth and it is bound to perish.

What about your family? Do they support you?

Yes, my family supports me. They encourage me to follow my convictions. I have four brothers and three sisters. All four of us sisters have become nuns in different congregations. My brothers are married and settled.

Ministry | Q & A with Sr. Lissy Vadakkel: 'I want to live until I give my statement' in court

Q & A with Sr. Infant Tresa, encouraging health and hope through yoga

Q&A with Sr. Maria Nirmalini, new president of the conference of women and men religious in India