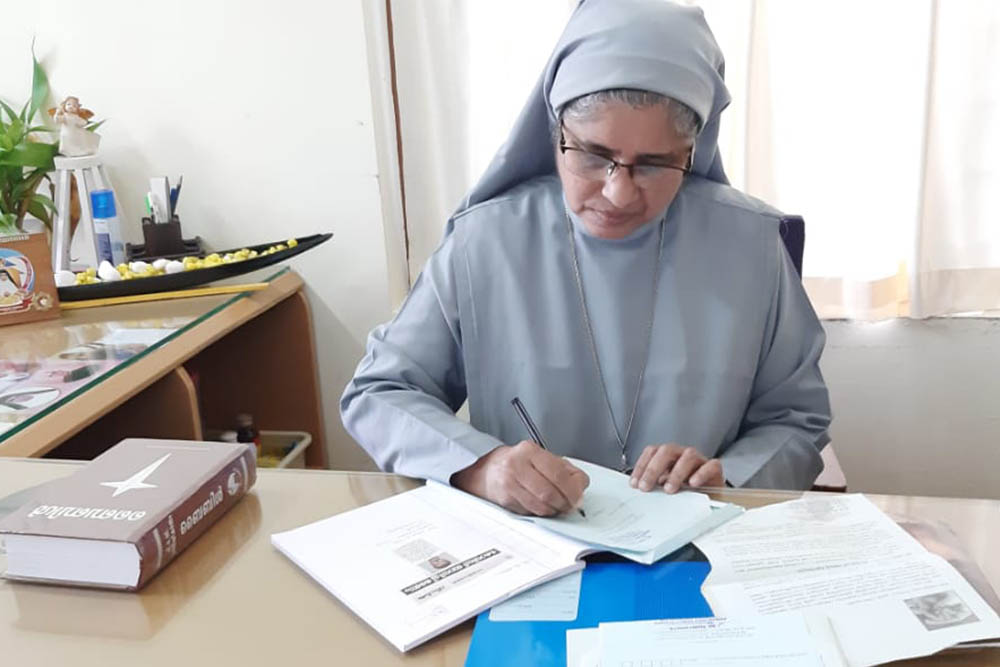 Sr. Tessy Kodiyil of the Congregation of the Holy Family writes letters to relatives of accident victims in her office at Aswas in Changampuzha Nagar, Kochi, in the southern Indian state of Kerala. (Courtesy of Tessy Kodiyil)

Sr. Tessy Kodiyil manages Aswas ("Comfort"), a center that reaches out to accident victims and their families. The member of the Congregation of the Holy Family says her mission is to bring love and hope to those in pain.

It all began in 2003, when Kodiyil, then a schoolteacher, found in a newspaper a picture of a young man crying. He had lost seven family members in a road accident. The picture compelled Kodiyil to contact the youth and comfort him. She said Jesus prompted her. 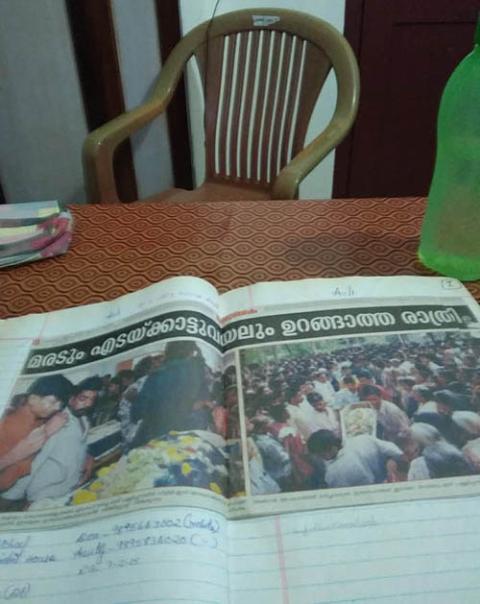 The photograph that inspired Sr. Tessy Kodiyil to start her letter-writing mission in 2003 (Courtesy of Tessy Kodiyil)

She began to collect information about the families of accident victims. She then learns their addresses and telephone numbers to write or call them to provide encouragement. Three more sisters now help her in the mission.

Kodiyil, 58, retired from teaching two years ago. She shared with Global Sisters Report about her unique apostolate.

GSR: Tell us how it all began.

Kodiyil: It came about unexpectedly, I must say. I was teaching at Cardinal High School at Thrikkakara [a suburb of Kochi, Kerala's commercial capital], about 1.5 miles from my convent. On March 11, 2003, when I was reading Deepika [Lamp, a Malayalam newspaper managed by the Catholic Church], I was numbed by a picture with a caption, "Sleepless night in Erakkattuvayal and Maradu" [two places in Kochi].

Around 17 Catholics had died in a bus accident. Their parish had taken them on a pilgrimage tour to Vailankanni [a Marian shrine in neighboring Tamil Nadu state]. The accident occurred on their return trip. In the picture, I saw a teenager, Doney Palliparambill, sobbing beside his seven deceased family members. I wondered how he was facing the harsh reality. I was really disturbed but did not know what to do. I felt I must do something for the young man in anguish. 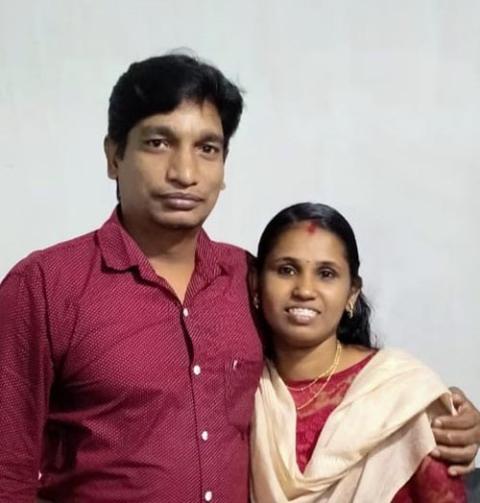 The first thing I thought was to write him a letter. I shared my plan with my superiors, who were supportive. Our congregation's main mission is family apostolate. My new attempt would become part of our mission.

Doney, who was 18 then, replied. Only he and his elder sister, who was married with a child, had survived. We built a house for him with funds from some benefactors. Now, he is married and settled, and we are in touch with him.

Thus began our ministry of serving accident victims and their relatives. I document newspaper clippings of accidents in a book with details. People often call me upon receiving my letter. Some want to see me while others request my prayers.

Did you ever imagine you were starting a new mission?

Not at all. I remember what my neighbor once said: "Sister, don't think it is just going to be writing letters. It will grow into an establishment."

I did not take him seriously on that day. I smiled and told him that mine was a small service for the people. His words came true after eight months when, on Nov. 21, 2003, we opened Aswas, a center for comforting accident victims. For me, it was a day of joy. God's plans are inscrutable. 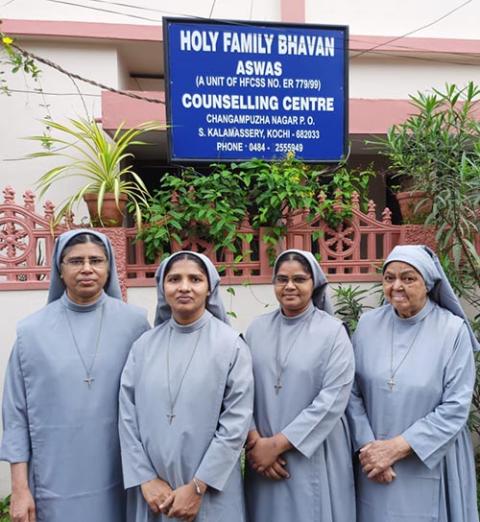 From left: Sr. Marietta Pulickal, who was provincial of the Congregation of the Holy Family when Aswas began; Sr. Therese Maria, superior of the convent; Sr. Christeena Parokkaran; and Sr. Daya Mathew, the present community at Aswas (Courtesy of Tessy Kodiyil)

Can you recall an instance that shook you?

A desperate-sounding young man called me from a hospital. "Sister, I want to see you at once." He had lost his wife, son and wife's parents in an accident. He was in pain.

Since I was at the school, I sent my sisters to meet him immediately. After school, I went to see him. He was in excruciating pain with multiple injuries. Only he and his daughter had survived. I was happy we could be by his side at that crucial moment. We kept in touch with him for a few years.

That incident convinced me that to reach out to people in pain, we have to get out of our comfort zones. When they call, when they need us, we have to be available.

How significant is this service today?

Counseling is a much-needed service at this moment in our world. I never thought my humble initiative would become an institution. People can walk in freely to meet the sisters and seek their counsel at our center.

I have written more than 5,000 letters so far. People preserve my letters. Some have told me that they read my letters when they are in difficulties. They would come to Aswas looking for me, holding the letter.

When I was teaching, two of us would visit houses of such people on weekends, when the school is closed. On seeing us, they would say with surprise, "Look, our sisters are coming." We too felt happy meeting them. Sometimes, we spend the whole day with them. We travel all over Kerala visiting the affected families. 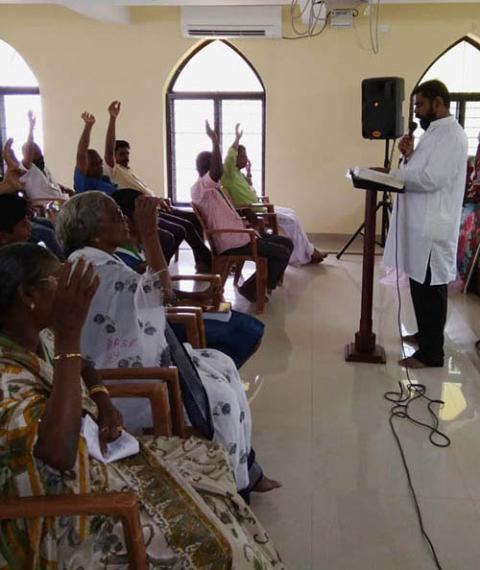 Participants at a three-day retreat organized for the relatives of accident victims at Aswas in Changampuzha Nagar, Kochi, Kerala, India (Courtesy of Tessy Kodiyil)

Some would come to our center for a three-day retreat. One couple who visited us had lost their 16-year-old son. They could not contain the pain. Although they have another 12-year-old son, they wanted to end their lives. It was then my letter reached them. They called me. I went to their house and prayed with them. It gave them courage to face life, they told me. They also started visiting me.

Anita Mohandas, a Hindu widow, lived in Muvattupuzha, about three hours' journey from Aswas. Her husband died in an accident, leaving behind her and their young son. She was completely broken when my letter reached her. She told me it was a big blessing for her. She considers getting in touch with Aswas as a turning point in her life. She says she finds peace and comfort after spending time with us and meeting others in similar situations. It was encouraging to hear from her, that Aswas can give a new lease on life to broken people like her.

Do you bring such people together?

We organize get-togethers for people of other religions and retreats for Christians regularly. Such gatherings offer them an opportunity to meet and share their pain and find comfort from one another's wounded lives. They are happy that we welcome everyone irrespective of religion or caste. However, such programs came to a standstill since March 2020 because of the COVID-19 lockdown.

What else do you do other than writing letters?

As the number of people increased, my community joined my mission. We began publishing a magazine, Aswas, that now serves as a communication medium between us and the people. Women from our parish associations help us with the magazine, from its initial stage to posting it. The expense is met by benefactors. 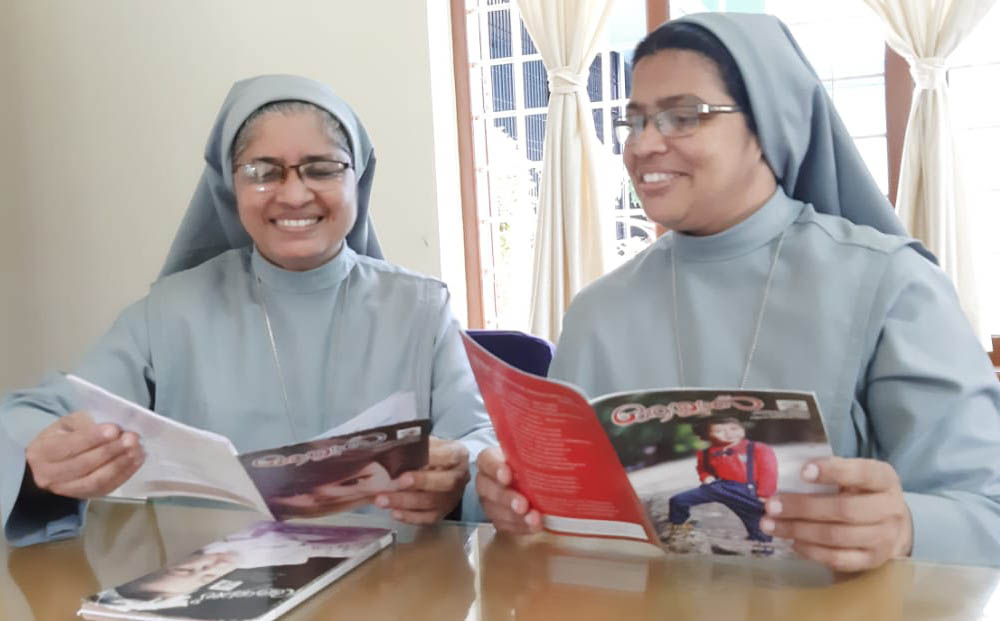 Now, I have started a family renewal program for pregnant women. I write to them. It is very important that we pray for them as they build up families. Another group we pray for is unmarried women. We cannot visit them but meet them through video calls. I also have created a group to pray for priests.

How did you choose "Aswas" as the name of the center?

Sr. Maria Paul [the provincial councilor for education] and I were together at the school for nine years. We used our lunch break to write letters. One day while writing letters, this name flashed in my mind. Jesus heals your wounds, Jesus touches your heart, and Jesus heals our every wound. In short, Jesus comforts us in all situations.

Tell us something about yourself.

I am the eldest of three girls and two boys. My father was a railway employee in Mumbai. He did not support me entering religious life. So, I joined the convent and sent him a letter.

The same year, he was taken ill, came home for treatment and died. Since I was 18, I was entitled to the job in the railways in my father's place. But I chose to continue my religious formation. My younger sister later got the job.

I am fortunate that Sister Johanna, who had lived with St. Mariam Thresia Chiramel Mankidiyan [the founder of the congregation], taught me from age 3. Their convent was in our parish, and they would visit our home regularly.

As a child, I had sympathy for those suffering. When I was in the fourth grade, I knew a woman suffering from cancer. During the lunch break, we would visit her. Somehow, I was convinced then that those who suffer are saints.

Once, I bought her some ground nuts. Seeing her eating them in terrible pain, I fainted. Later, when I visited the convent, the nuns invited me to visit the woman. I was so delighted. I then decided to become a sister so that I can visit families in distress.

But I was also worldly. As a teenager, I excelled in dance and singing. I was fond of wearing fashionable dresses. My mother encouraged it.

I went to my cousin's wedding dressed in fineries. I wore the same dress to catechism class the next Sunday. The sister teaching the class said, "What does it profit a man if he gains the whole world and loses his soul?" I felt my talents and fine dresses had no meaning. Slowly, I gave up beautiful dresses. After the 12th grade, I joined the congregation.

Why did you join this congregation?

I was already fond of St. Mariam Thresia. I prayed to her for my father's recovery. Maybe my father's departure, a very sad moment in my life, helped me enter the convent. I was heartbroken when I lost him. In the novitiate, I had to undergo counseling to overcome my sense of loss. Losing my father at a young age helped me understand the pain of others who lose their dear ones.

People said joining the convent was an escape. I suffered all this and told Jesus to take care of my family. And he did.