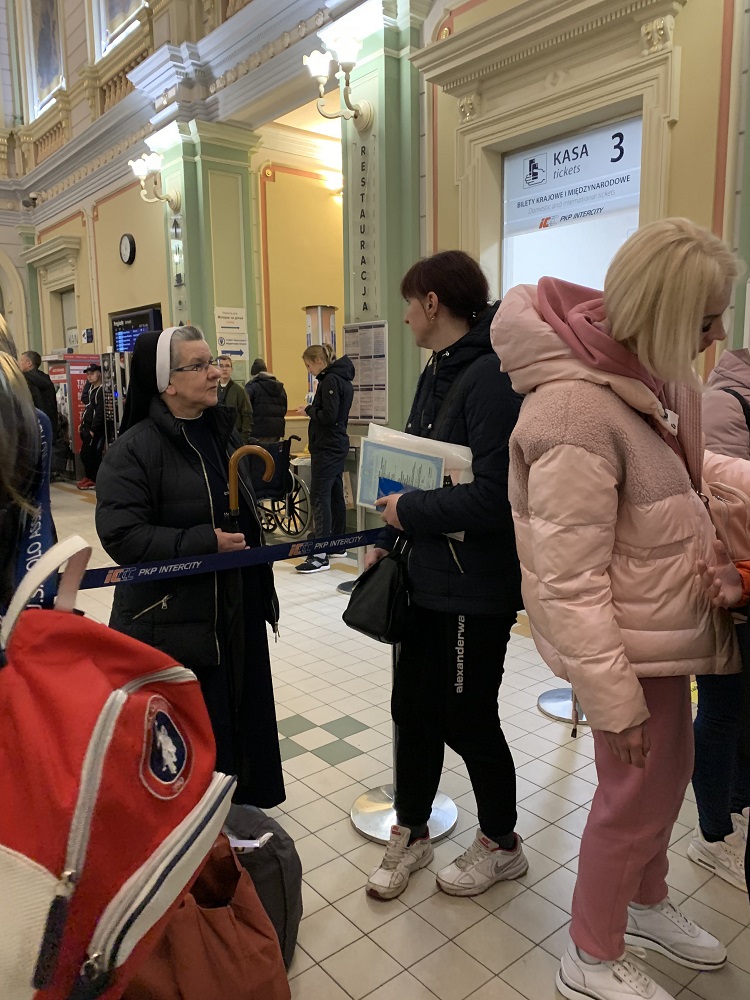 Sr. Lucja Kwasniak, a member of the Sisters, Servants of the Immaculate Heart of Mary, talks to Ukrainian refugees April 21 at the train station in Przemysl, Poland. Kwasniak was working in Odesa, Ukraine, when the war began, but the local bishop sent her back to her order's provincial house in Poland. Now, she helps other people fleeing the war. (CNS/Cindy Wooden) 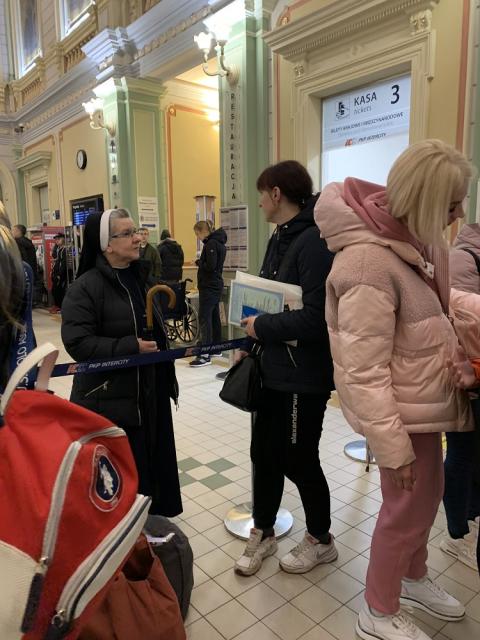 Sr. Lucja Kwasniak, a member of the Sisters, Servants of the Immaculate Heart of Mary, talks to Ukrainian refugees April 21 at the train station in Przemysl, Poland. Kwasniak was working in Odesa, Ukraine, when the war began, but the local bishop sent her back to her order's provincial house in Poland. Now, she helps other people fleeing the war. (CNS/Cindy Wooden)

At 10 p.m. April 21, the number of people walking across the border from Ukraine to Poland at Medyka was less than a trickle.

At the automobile crossing nearby, cars and trucks were lined up for miles to clear security and customs to head into Ukraine.

The train station at Przemysl, the closest one to the border, was still busy, though not with the crush of the early days of Russia's war on Ukraine.

Many people were returning to western Ukraine, either for the Easter holidays — celebrated April 24 on the Julian calendar — or to check on their homes or because life as a refugee was just too much to handle.

But the Sisters, Servants of the Immaculate Heart of Mary and the volunteers who help them still head to the train station each night and invite the war-weary travelers to their house to rest.

Sr. Janina Woloszyn, head of the order's Przemysl-based province, keeps a running tally of their guests; as of early April 22, the sisters had hosted 1,260 people since Feb. 28. The guests included Nigerian and Italian students who were studying in Ukraine, several elderly women who use wheelchairs, a group of youngsters with hearing impairments, and hundreds of women with young children.

Sr. Lucja Kwasniak, who was working in Odesa when the war broke out and was sent back to Przemysl by the local bishop, spent an hour late April 21 at the foot crossing, talking to every person coming into Poland or going back to Ukraine. 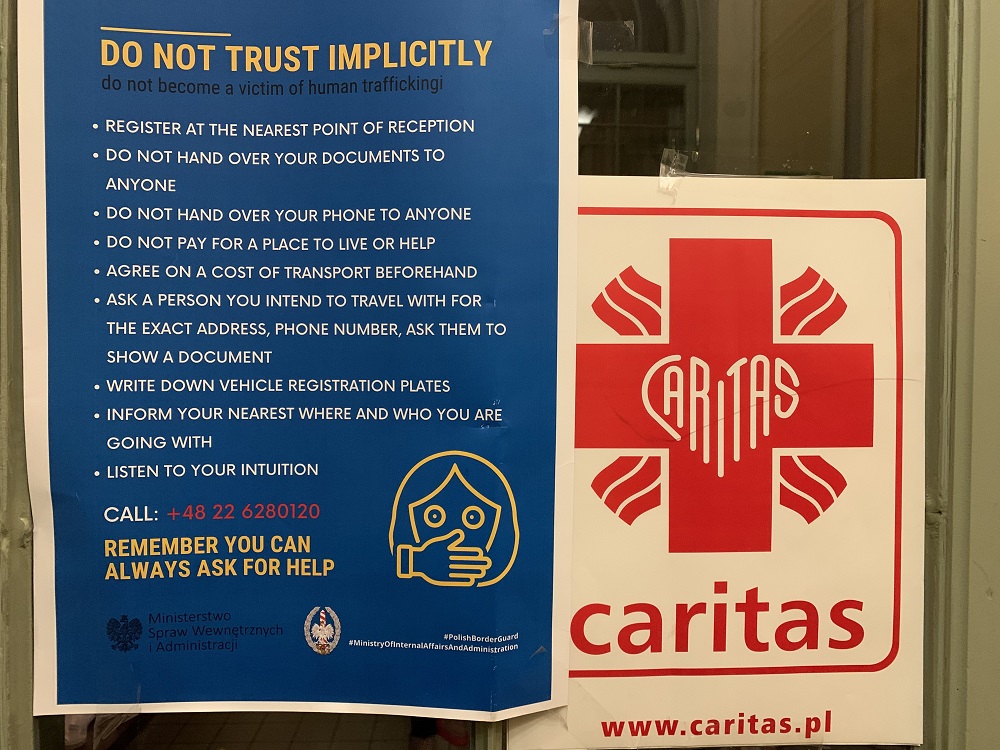 A sign on the office of Caritas at the train station in the Polish border town of Przemysl instructs Ukrainian refugees, especially women, on how to avoid becoming victims of trafficking or falling into the clutches of unscrupulous people. (CNS/Cindy Wooden)

The crossing is lined with dozens of tents offering free food — including hot soup and pizza fresh from fiery ovens — hot tea and other beverages, free phone calls, medical care, logistical support and more. But the volunteers staffing the tents were having a very slow night.

After about an hour, Kwasniak headed back to Przemysl, going to the train station. Scanning the lobby, she picked out a group of four women with three children and struck up a conversation. They were headed to Vienna but didn't know when they would get their first train.

Although grateful for the offer of rooms at the provincial house, the women wanted to stay and wait for their train. Kwasniak told them volunteers could bring them to the house if they changed their minds.

As it turned out, other sisters had already been to the station and the house was full — 30 guests — for the first time in a week.

Sr. Dorota Bialowas, one of the 12 sisters living at the provincial house, said their early guests arrived in Poland knowing where they were going, which usually was to relatives or friends in Poland or neighboring countries. They just needed to rest, eat and wash before moving on.

Those arriving in April, though, "don't know where to go," she said.

But, still, they usually stay only a night or two in Przemysl because they do not want to be that close to the border and the war.

The ebb and flow of refugees depends on the fighting and, especially, on Russian bombing raids in Western Ukraine, where many of the estimated 6.5 million people displaced within Ukraine have sought shelter.

On Holy Thursday, April 14 according to the Gregorian calendar,  Bialowas said the convent had only two guests. On Good Friday, there were none. And on Holy Saturday, volunteers at the train station said they would not send any refugees to the sisters so they could focus on their prayers and Easter Vigil.

"But we already had done our shopping," she said. "On Easter Sunday, we could not resist any longer, so we went to the train station and brought 13 people home."

In addition to the provincial and members of the provincial council, the community includes two sisters who teach at a kindergarten, two who work at the cathedral and one who teaches religion at a public school. All 12 are involved in helping the refugees,  Bialowas said.

"No one thought about it," she said. "One day, there were people in need, and everyone in town showed up to help. It was spontaneous."

The war and the refugee crisis it provoked made for a very different Holy Week, she said.

"It was not difficult to keep the silence we strive for in Holy Week, because what we had seen was so powerful, we needed to contemplate," she said. "When we prayed, we could see the faces of those suffering people."

Bialowas said she always will remember a mother from the besieged city of Mariupol who spent nine days traveling with her children to escape. They did not have a hot meal that whole time, nor did they find a place to wash.

After the sisters fed her and the children, let them take showers and rest, "she relaxed and cried for joy and hugged everyone," she said. "When I think of Easter joy, I see her face."