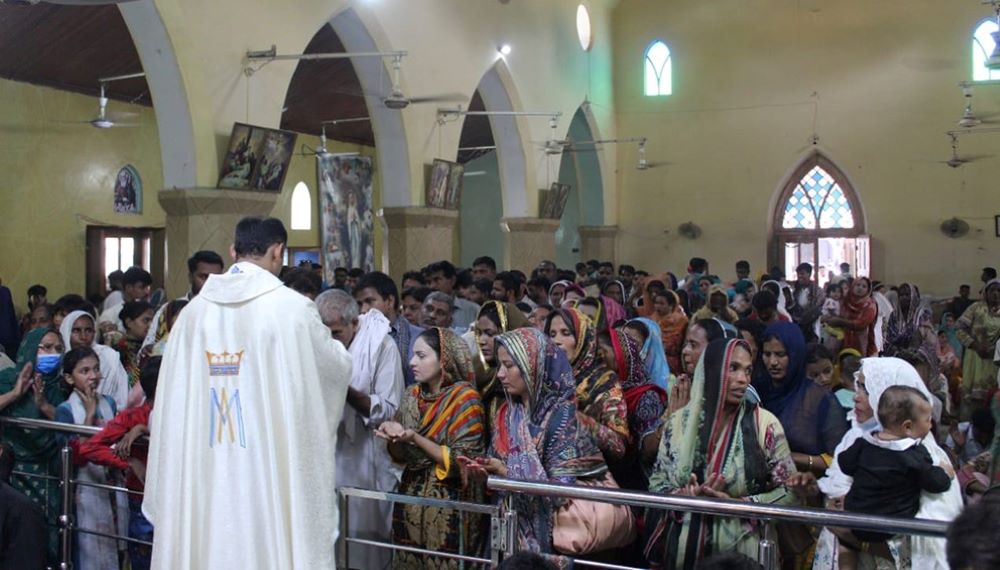 Fr. Tariq George, rector of the shrine in Mariamabad, at the Church of St. Mary and St. Joseph (Courtesy of Anthony Gill)

Catholic nuns supported priests and bishops in conducting a famous three-day pilgrimage in the Catholic village of Mariamabad, Punjab province.

More than 100 nuns from 25 congregations joined for prayers, preparing the lectors and leading choirs at the 73rd pilgrimage held Sept. 9-11 under the title "Holy Mary Source of Love." More than half a million pilgrims from all over Pakistan made the annual pilgrimage linked to the feast of the Nativity of Mary, which is Sept. 8.

It was the first time, however, that Dominican Sr. Cecilia Rasheed witnessed devotees traveling to the shrine on foot, by bicycle or in vehicles, bringing gifts such as crowns, dupattas (women's veils), livestock, candles or money in thanksgiving. Day and night, the nonstop procession kept coming to the grotto at the Church of St. Mary and St. Joseph. 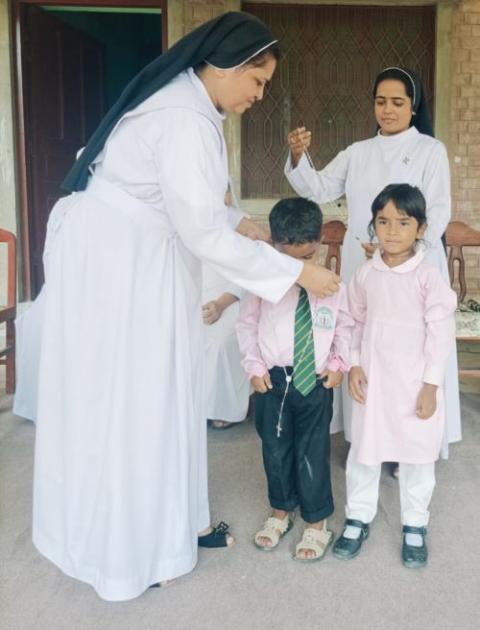 Archbishop Sebastian Shaw of Lahore led the Sept. 9 opening Mass. Security volunteers later cleared the way at a jampacked grotto for 18 students of Sacred Heart High School, run by Dominican Sisters of Malta in Jhang, more than 200 kilometers (124 miles) west of Mariamabad, who were dressed as flower girls and boys as well as angels holding silver trumpets. Some showered petals on the group led by nine Dominican Sisters of Malta from Jhang.

Following the tableau, Shaw blessed the silver and gold crowns that were placed on the Marian statue amid claps and cheers.

Those in the church compound waited in line for hours and prayed at the Marian shrine, lighting candles or incense sticks. Young people outside also danced to the beats of the dhol — a double headed drum — on the grounds where a market sold Christian gifts, souvenirs, Gospel CDs, toys, clothing, food, beverages and even tattoo services.

"We have visited the shrine before but were invited for the first time for the pilgrimage," Rasheed told Global Sisters Report. "Our students loved the spiritual atmosphere and colorful stalls outside. It's a great opportunity to renew faith." 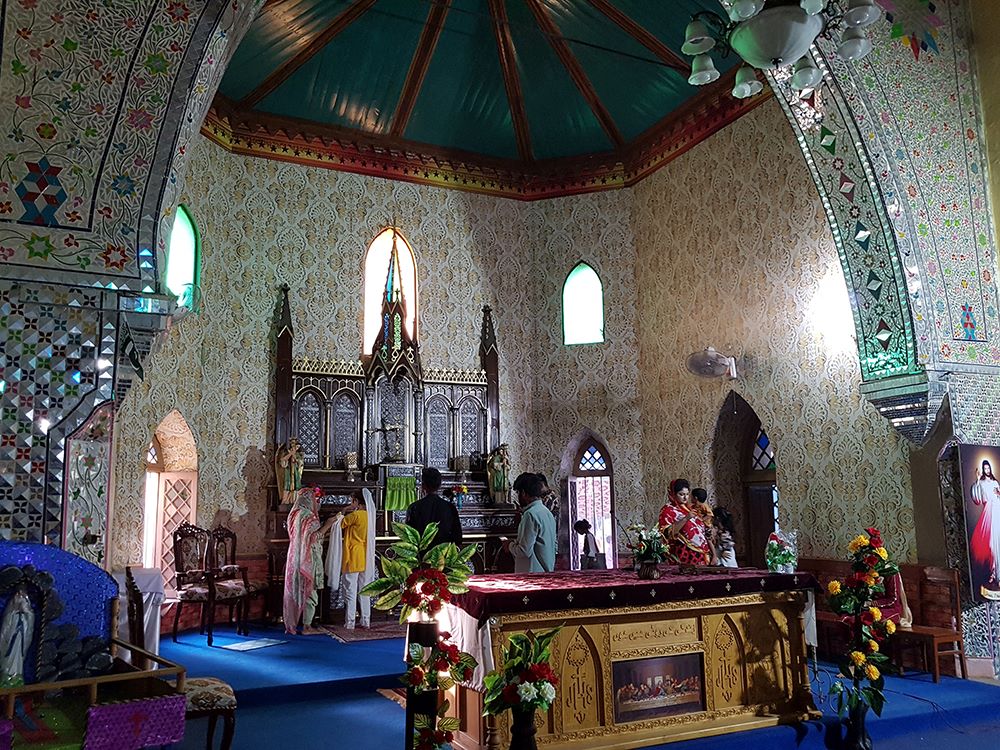 According to the school principal, the students rehearsed for 20 days for the tableau performance on a Christian hymn, spending a week with a hired classical dancer.

The participating students were awarded rosaries next day at Sacred Heart High School.

Fr. Tariq George, rector of the shrine in Mariamabad, said he appreciated the religious for supporting the pilgrimage.

"The nuns usually work behind the scenes," he said, noting that the congregation responsible for the coronation changes every year, and they seek families to donate the statue's crown. "We thank them for making this pilgrimage a success." 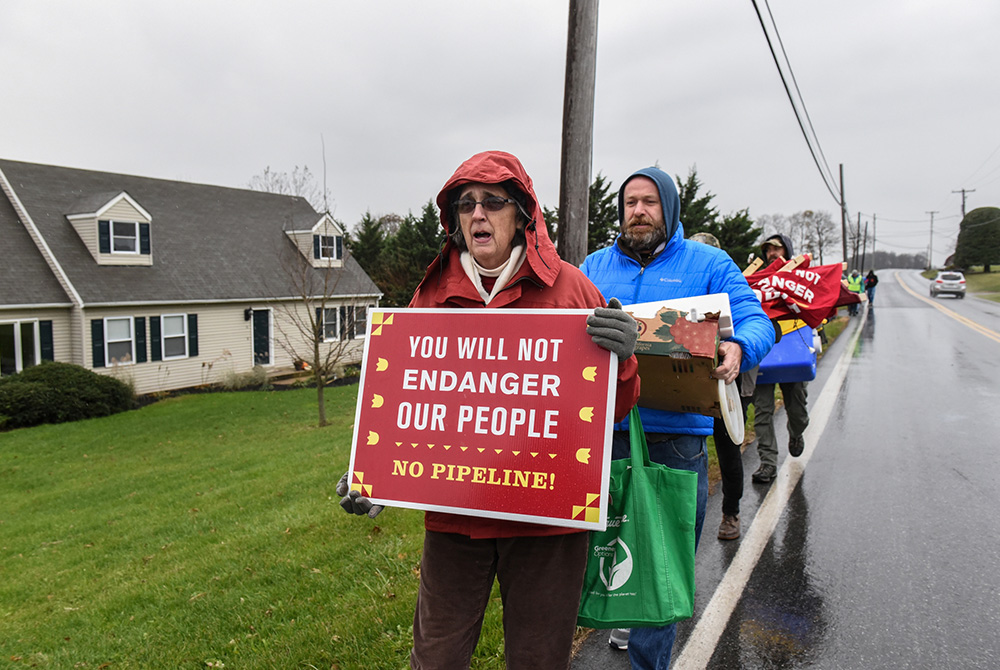 The Adorers of the Blood of Christ, who fought to keep a gas pipeline from crossing their land in Pennsylvania, are back in court.

The Adorers joined other property owners in the area in fighting the pipeline, saying it violated their land ethic. In 2017, when it became clear their protests would not stop the pipeline, they built a chapel in its path and filed a lawsuit. But the lawsuit was dismissed on procedural grounds, and Transcontinental Gas Pipe Line Co. (Transco), an Oklahoma-based subsidiary of The Williams Companies Inc., seized the land through eminent domain and built it anyway. It went into operation in 2018.

In 2020, the sisters sued again, arguing that the pipeline's construction violated their ability to live out their religious beliefs around caring for creation because it transports one of the main fossil fuels driving global warming and will contribute to climate change. The $3 billion, 183-mile pipeline delivers natural gas from the Marcellus shale geological formations in northeast Pennsylvania to distribution lines along the East Coast.

In October 2021, the sisters' 2020 lawsuit was dismissed, but the ruling left open the possibility of an appeal, arguing that while they may not be able to stop the pipeline, they may be entitled to damages. 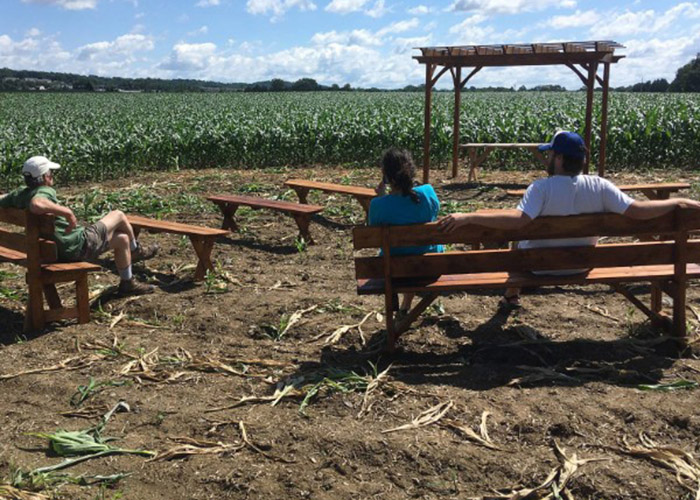 People sit at an outdoor chapel on the property of the Adorers of the Blood of Christ in 2017 in Columbia, Pennsylvania. (CNS/Mark Clatterbuck, courtesy of Lancaster Against Pipeline)

On Sept. 15, the sisters were back to the U.S. 3rd Circuit Court of Appeals in Philadelphia for oral arguments in their case seeking damages.

"We strongly believe that our case against Transco is about being true to our consistent life ethic and to our call as religious women, in solidarity with our Catholic Church's call to be pro-life in its fullest expression. Transco/Williams, a $40B private corporation, has forced us to use our land in a way that directly violates not only our religious beliefs about the sacredness of Earth, but also our religious practice of faithfully stewarding our own land for future generations," Sr. Janet McCann, a member of the Adorers' U.S. Regional Leadership Team, said in a statement. "Every day, since October 2018, when pipeline construction was completed and fossil fuel gas began flowing through our farmland in Lancaster County, Transco continues to add to the profits of its multi-billion-dollar corporation. Every day, since October, 2018, as fossil fuel gas flows through our farmland, so also flows Transco's blatant disregard and trampling of the Adorers' religious beliefs."

More than 200 leaders in the U.S. Catholic Church will gather Sept. 22-23 in Washington, D.C., to discuss how to incorporate synodality into church leadership structures and culture.

The two-day gathering, known as the Catholic Partnership Summit, is a response to the synodal shift that Pope Francis started and will be hosted by Leadership Roundtable, a Catholic nonprofit that seeks to promote best practices in leadership and management within the church.

"Pope Francis has set a bold vision for the Church by asking it to become synodal — a Church that listens to all voices and experiences to discern the direction of the Spirit," Kim Smolik, an executive partner at Leadership Roundtable, said in a press announcement. "As leaders, we are called to carry out that vision and that requires us to embrace new, agile ways of leading."

Discussions will focus on how synodal leadership calls for a unified church, specifically considering topics like the roles of women's leadership and of emerging models of faith in practice.

"Synodality is a way of being Church in which we not only listen to each other, but we are conscious that we are called together to walk the same path that has been marked off for us by the Holy Spirit," Cardinal Joseph Tobin of Newark, New Jersey, a co-host of the summit, said in the announcement. "It's not simply collecting opinions, but it's an invitation to discover a more profound unity."

Leaders at the summit will also address the ongoing divisions among Catholics and discuss and propose ways leaders can help bridge divides and promote unity within faith communities.