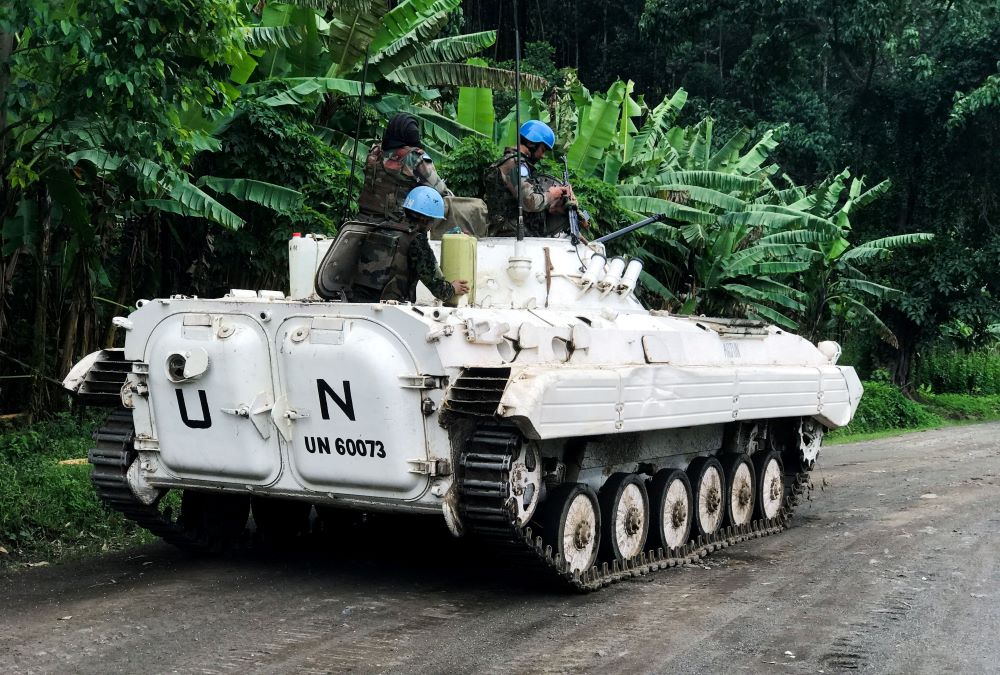 A Catholic sister serving in the Butembo-Beni Diocese of the Democratic Republic of Congo was among seven people killed when gunmen attacked a Catholic mission hospital in the eastern part of the country, ACI Africa reported Oct. 21.

Sr. Marie-Sylvie Kavuke Vakatsuraki and six others who were patients at the Catholic health facility died in the Oct. 20 attack in Maboya village in North-Kivu province, the news agency reported based on reporting by Persecution.org.

The news accounts said soldiers of the Allied Democratic Forces, a Congolese Islamic rebel group from neighboring Uganda affiliated with the Islamic State group, were responsible for both the killings and setting the health facility on fire after stealing drugs and medical equipment.

In an Oct. 20 statement, the Butembo-Beni Diocese said it "strongly condemns" the attack on the mission hospital.

"It is with deep consternation that the Diocese of Butembo-Beni learned the sad news of an armed attack on Maboya village targeting, among others, the Centre de Santé de Référence de Maboya, which is a health facility of our Diocesan Office of Medical Works," Bishop Melchisédec Sikuli Paluku said in the statement, ACI Africa reported.

"Word cannot express the horror that has more than crossed the threshold!" the bishop said, sending condolences to the families of those killed and to the affected community.

Vakatsuraki was a member of the Little Sisters of the Presentation of Our Lady at the Temple in Butembo-Beni, and the bishop noted her service to "her brothers and sisters."

The Butembo-Beni Diocese, located in the northeastern part of the country, has been the site of recent attacks by the Allied Democratic Forces, including the assassination of several priests and, on Oct. 4, of 20 Christians in Kainama, Nord-Kivu.

Friends in Solidarity, the U.S.-based partner to the ministry Solidarity with South Sudan since 2015, has a new president, Sr. Mumbi Kigutha, a Sister of the Precious Blood of Dayton, Ohio.

In an Oct. 25 announcement, Friends in Solidarity said Kigutha, a Kenyan sister who is also a contributor to Global Sisters Report, will begin her tenure with the Maryland-based group in February. She will succeed founder and current president Sr. Joan Mumaw, who is retiring.

Friends in Solidarity provides support for the ongoing work by Solidarity with South Sudan, a collaborative 14-year-old ministry in South Sudan.

Solidarity is an international network of Catholic sisters, priests and brothers. Its ministry focuses on "building the capacity of South Sudanese to become teachers, registered nurses, midwives, sustainable farmers and pastoral agents," according to its website. 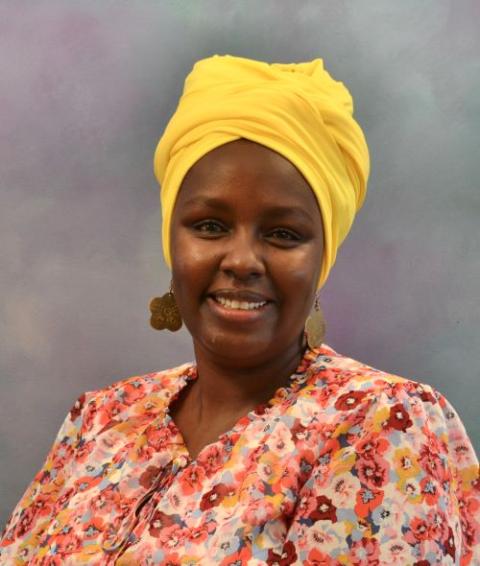 Sr. Mumbi Kigutha of the Sisters of the Precious Blood of Dayton, Ohio (Courtesy of Friends in Solidarity)

"I am very happy to be chosen to lead FIS," Kigutha said in the Oct. 25 announcement. "My educational background in business and theology coupled with many years of experiences in social sciences at the grassroots level in various African contexts will hopefully put me in good standing to succeed and flourish in this role."

The group said Kigutha "brings a wealth of skills and experience to her new role, including a bachelor's degree in commerce and a master of business administration degree, both with a marketing specialization, from the Catholic University of East Africa." Kigutha also holds a master's degree in justice ministry from Catholic Theological Union in Chicago.

Kigutha's work in the humanitarian field includes experience as an intern with the United Nations High Commission for Refugees, as a consultant with the U.N. Population Fund, and as an humanitarian affairs officer for the U.N. Office for the Coordination of Humanitarian Affairs in Nairobi, Kenya.

In addition, Kigutha served as the organizing secretary of the Pan-African Catholic Theology and Pastoral Network, Friends in Solidarity said, supporting "its growth and development from an informal network to an organization with a nonprofit arm with more than 300 members."

She also ministers as a reconciliation consultant for various local and international groups, including Jesuit Refugee Service.

Mumaw said she welcomes her colleague as the new president of Friends in Solidarity and looks forward "to working with her in the new year to ensure a smooth transition for the organization and for her as the new chief administrative officer."

"We are blessed to have someone with Sister Mumbi's experience and skills to assume this position," she said.

In February, Mumaw expressed her intent to retire as president of Friends in Solidarity.

As part of her new mission, Kigutha will begin work with a February visit to South Sudan to meet Solidarity staff and familiarize herself with the Solidarity projects.

The new position, she said, "gives me the space to dream, innovate and create while collaborating with fellow religious and other supporters, in journeying alongside the people of South Sudan as they shape their own future."

Friends in Solidarity recently announced the launch of the FiSolidarity Legacy Fund from a major gift from the Our Lady of Victory Missionary Sisters, who are moving toward completion. The new fund is focused on making sure that support is available for ongoing work by Solidarity with South Sudan.

Flores was recognized Sept. 20 with a Freedom Award for her work in preventing sex trafficking and the exploitation of children. 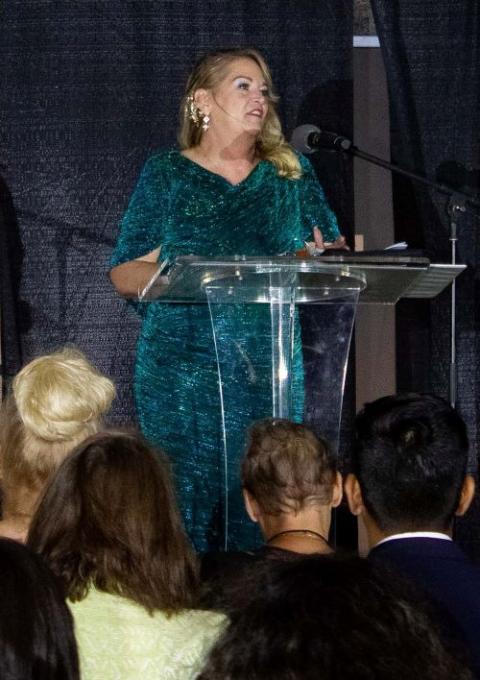 "It's an honor to be recognized by ECPAT USA for the mission that God put before me 15 years ago," Flores, a licensed social worker, said in a statement.

"This journey has been heart-wrenching, mind-opening, brought me to my knees in tears, and also opened my heart to the huge amount of support and happiness I have received in turn," she said. "Receiving the 'Freedom Award' is humbling because it wasn't just me who did this work, but also motivating because we need a lot more people doing this work to end human trafficking."

In addition to serving as the program director for U.S. Catholic Sisters Against Human Trafficking, Flores, a survivor of domestic child sex trafficking, is the founder of Save Our Adolescents from Prostitution (the Soap Project). That group mobilizes citizens to help locate missing youth who are being trafficked during major sporting events and helps trafficking survivors heal.

Flores has been a licensed social worker for more than 30 years and was appointed to the Ohio attorney general's Human Trafficking Initiative in 2009. She has testified before both the Ohio House of Representatives and Senate in support of human trafficking legislation, the sisters' group said.

Theresa Flores's Law, passed in Michigan in 2015, eliminates the statute of limitation for children who have been trafficked, the statement said.

As a member of ECPAT International, ECPAT-USA belongs to a network of organizations in more than 100 countries working collaboratively to end the commercial sexual exploitation of children.

Flores has researched the mental and physical health problems of more than 200 domestic trafficking survivors and has hosted more than 200 women at survivor retreats, the statement notes.

U.S. Catholic Sisters Against Human Trafficking was founded in 2013 by a group of Catholic sisters committed to ending human trafficking and supporting survivors.

The member-based organization has grown to include more than 110 congregations of women religious. The group is also the U.S. member of Talitha Kum, an international network of consecrated life working to end human trafficking.